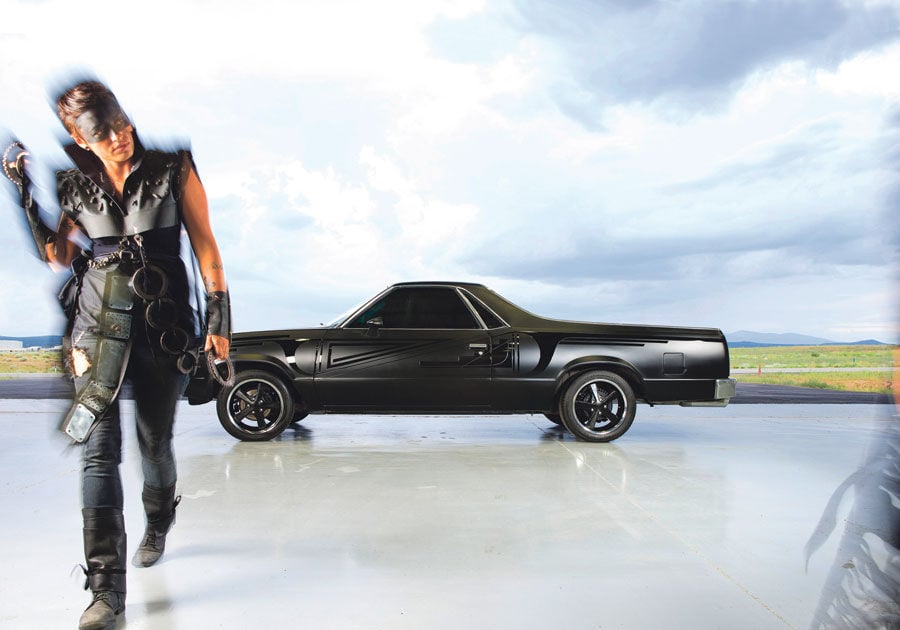 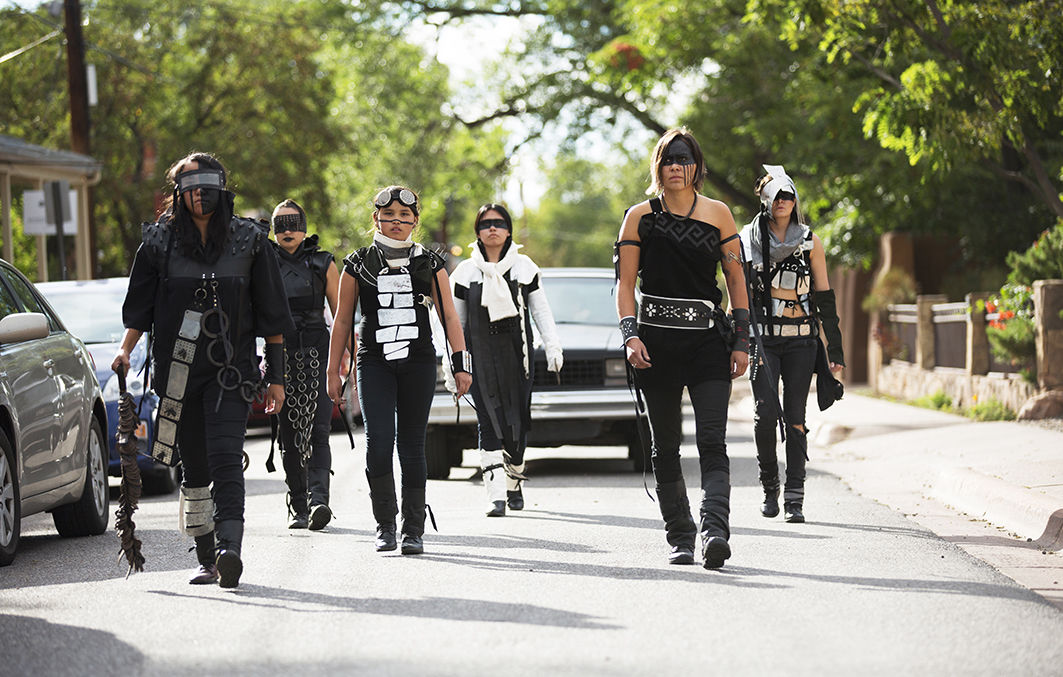 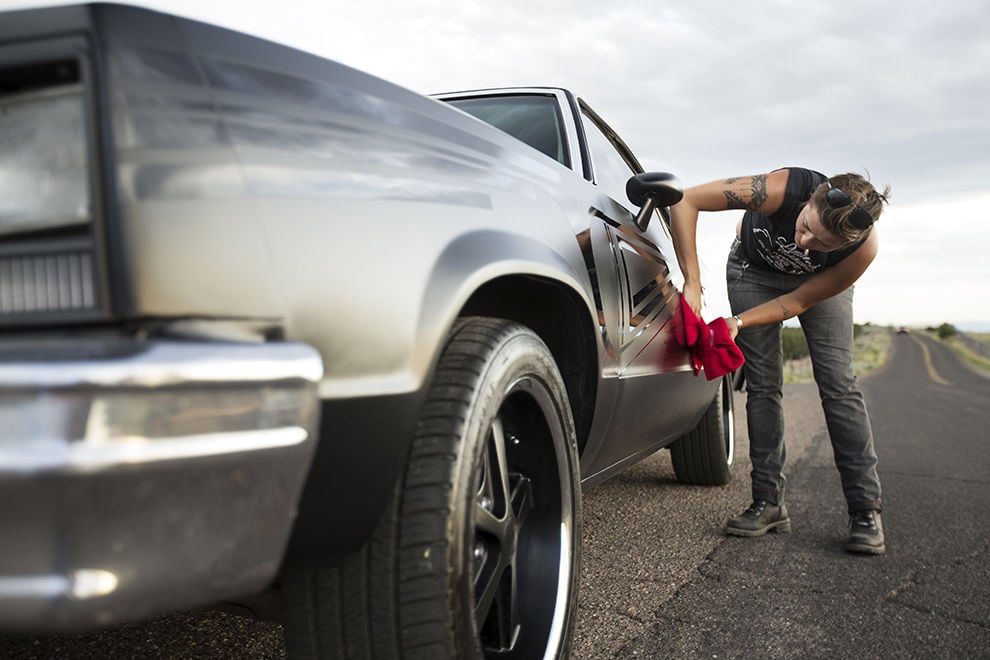 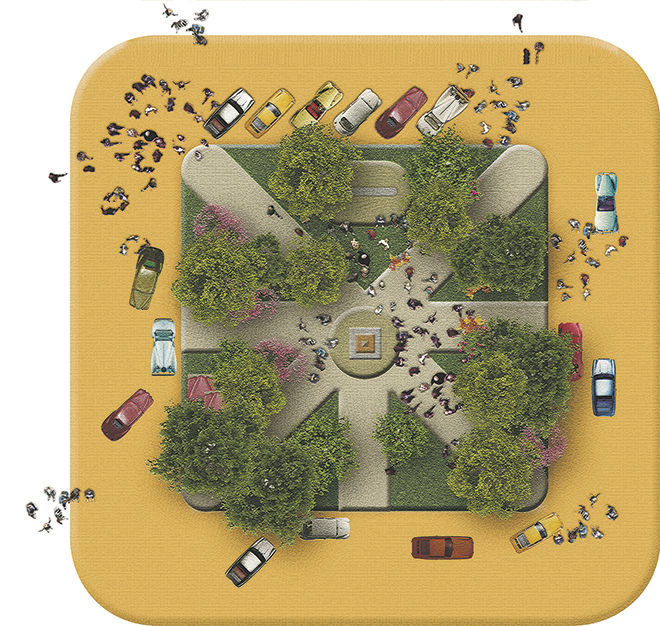 Maria is a muscle car that makes love to its landscape. She’s a 1985 El Camino whose low-flying panels have been overlaid with the supple black-on-black clay forms of Santa Clara pottery. Gliding along Highway 285 between Española and Santa Fe, the Jemez and Sangre de Cristo peaks find themselves reflected in the car’s minimalist mountain crest designs. A convergence of forms, the vehicle brings a whole new meaning to the word “vessel,” with its stylized use of Pueblo ceramic aesthetics wrapped around the sinewy chassis of a classic American hot rod. “I’m sure someone loved her once or twice before, but I transformed that car. How many times I sanded it, caressing every inch of that car,” said Rose B. Simpson in an interview with Pasatiempo. “It has energy. It has juju.”

Simpson rebuilt much of the car during a 2013 residency at the Denver Art Museum. Her stay there concluded with a dramatic presentation in front of the museum as she cruised the newly refinished El Camino, flanked by seven models wearing postapocalyptic leather-and-metal outfits fashioned by Simpson. A YouTube video of the event shows the steely black car thumping a human heartbeat through its bass-heavy sound system. “The car has a heartbeat; Maria has a heart,” Simpson said. “If we can find our heart, we can restore our empathic relationship with the world.”

Maria will be on display downtown on Sunday, May 22, as part of the official Lowrider Day on the Plaza. The event ties in with two exhibitions at state museums, Con Cariño: Artists Inspired by Lowriders, opening on Friday, May 20, at the New Mexico Museum of Art, and Lowriders, Hoppers, and Hot Rods, which opened May 1 at the New Mexico History Museum.

Maria the El Camino takes her name from Maria Martinez, an early 20th-century pioneer in creating the look and feel of Santa Clara black-on-black pottery. Since Simpson sees the car as an extension of her own personal work in pottery and ceramic sculpting, she thought the name was a fitting homage to a Pueblo art world icon. On top of that, creating the car allowed Simpson to fuse two passions she has nurtured since childhood — making ceramic creations and performing automotive overhauls.

Simpson is widely known for her mixed-media clay-based sculptures that blend elements of the human, animal, and plant worlds. But she also has been rebuilding cars since before she was a teenager — a talent she credits to her industrious parents Roxanne Swentzell, the famed Santa Clara ceramic sculptor, and Patrick Simpson, an artist who works in wood and metal.

“My dad’s artistic. My mom decided to turn off electricity when I was a kid to see if we could live off the grid,” Simpson said. “We were very empowered to figure things out on our own. My mom is a very do-it-yourself woman. She was always the one with a chainsaw, fixing cars, building the house,” Simpson added. “I didn’t grow up with any specific gender roles for work.”

Tinkering with unusual, powerful vehicles is in the family DNA. “My parents joked they took apart a VW hatchback and had the engine on the kitchen table as they were working with it,” Simpson said. “My dad rebuilt this dump truck when I was a kid. It ended up being our primary mode of transportation to get around. In Española, when I was growing up, I saw lowriders everywhere.” So steeped in DIY car culture, at the age of twelve, Simpson bought her first car, a 1989 Jeep Cherokee, from money she saved doing construction work, assisting in the construction of the Pojoaque Mail Center.

A bit young for the trades? Simpson demured. “I happened to be knowledgeable in plaster and adobe craftsmanship. So they hired and paid me.” She fixed up the Cherokee before even entering middle school, a feat that involved pulling her own four-wheel drive transmission, which weighed well over 200 pounds. But her love of cars went far beyond the actual vehicle. “Cars became my freedom. The Jeep epitomized freedom. It became my turtle shell in many ways. I even lived in my car for a while.”

Fast-forward two decades, and it’s unsurprising that after completing her MFA at the prestigious Rhode Island School of Design, Simpson headed back to Española, this time to enroll in the automotive collision and repair program at Northern New Mexico Community College. Unfortunately, however, the vehicle program was discontinued at the embattled institution before Simpson could complete a degree.“I’m still angry about that,” Simpson said. “It cut off a whole group of students from tools and from cars they had been working on for months.”

With its impeccable and unprecedented paint job, one might assume Simpson went through a lot of trial-and-error to arrive at the El Camino’s paint job. Not a chance. “My teacher at [Northern New Mexico Community College] told me it not might not work, that the different shades of black paint might blend together and I would lose the design. But I did it anyway and it worked.”

Since the car’s last public outing — though it continues to be infrequently used as a private vehicle by Simpson — the artist blew out the car’s rebuilt Chevrolet 350 block V8 engine and has since swapped in a custom-made 410 horsepower, 350 small-block engine, a mechanical beast that exerts so much power that a racing-style vacuum is required to operate the brakes safely.

“This car is a power object. It’s also aggressive. It allows you to just be in that moment of pride, to be very engaged and aware of yourself,” Simpson said. “These days I drive a new Dodge Challenger. The El Camino can just smoke that car any day.” ◀

The state museums in Santa Fe haven’t finished with lowriders. In conjunction with the New Mexico History Museum’s exhibition Lowriders, Hoppers, and Hot Rods: Car Culture of Northern New Mexico, which opened on May 1, the New Mexico Museum of Art presents Con Cariño: Artists Inspired by Lowriders, opening with a reception on Friday, May 20. The show includes more than a dozen artists who are either inspired by New Mexico lowrider culture or who use lowriders as the vehicle (pun intended) for their art. The artists explore familial themes, gender issues, religion, and community. Works by photographers Miguel Gandert and Norman Mauskopf, contemporary santeros Arthur Lopez and Luis Tapia, sculptor Rose B. Simpson, and others are on view. The artists engage in a series of free gallery talks at the Museum of Art starting on Friday, June 3, at 5:30 p.m. with Arthur Lopez. Visit www.nmartmuseum.org for details on upcoming talks throughout the summer.

The opening weekend of Con Cariño: Artists Inspired by Lowriders coincides with Lowrider Day on the Plaza on Sunday, May 22, featuring a lowrider procession that runs from Fort Marcy Park to the Plaza, a proclamation by Mayor Javier Gonzales, who will declare summer 2016 to be “Lowrider Summer,” hopping demonstrations, music by DJ Jason Crawford, and more. Art projects take place inside the museums, and New Mexico residents with ID can visit the New Mexico Museum of Art and the New Mexico History Museum for free. — Michael Abatemarco

Entrance by museum admission; no charge Fridays from 5 to 8 p.m., May through Oct.

> Lowrider Day on the Plaza