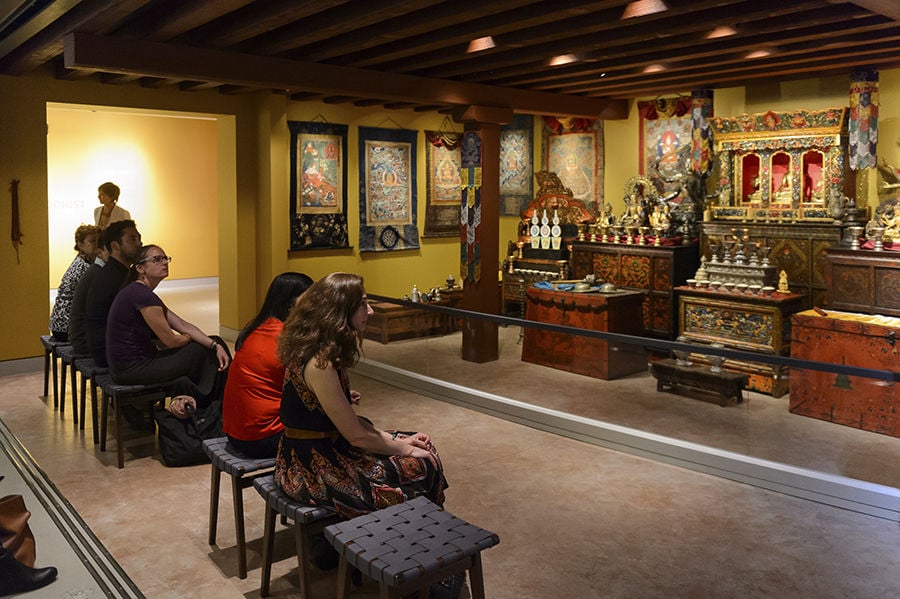 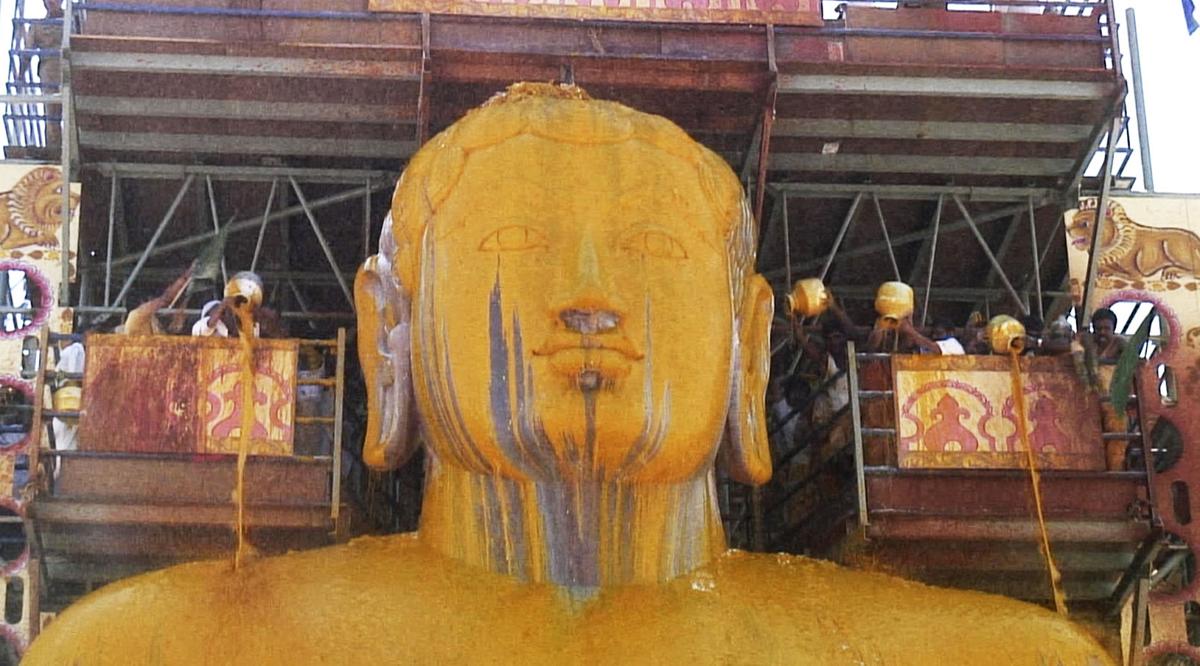 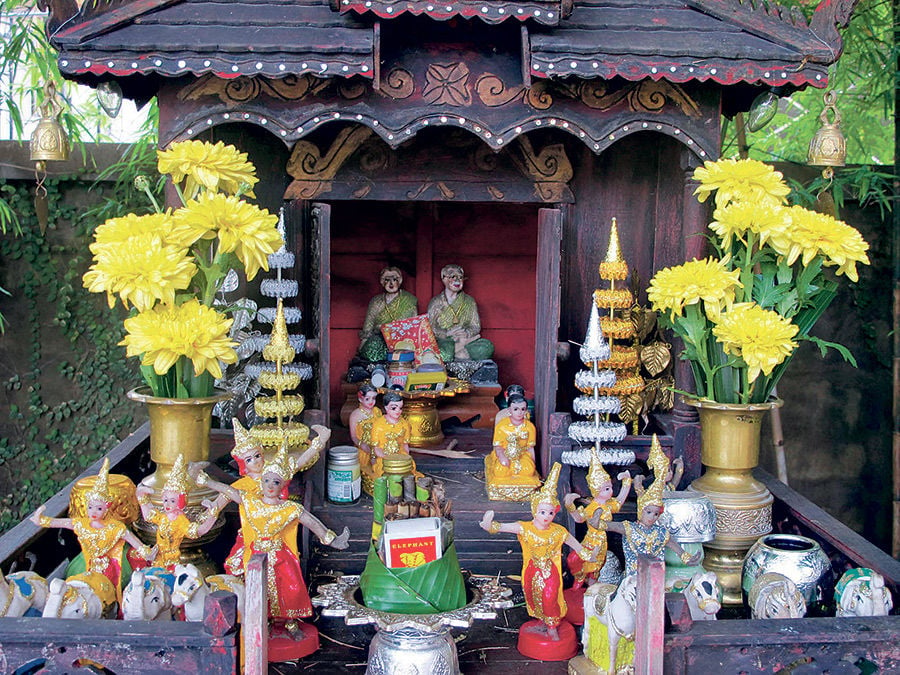 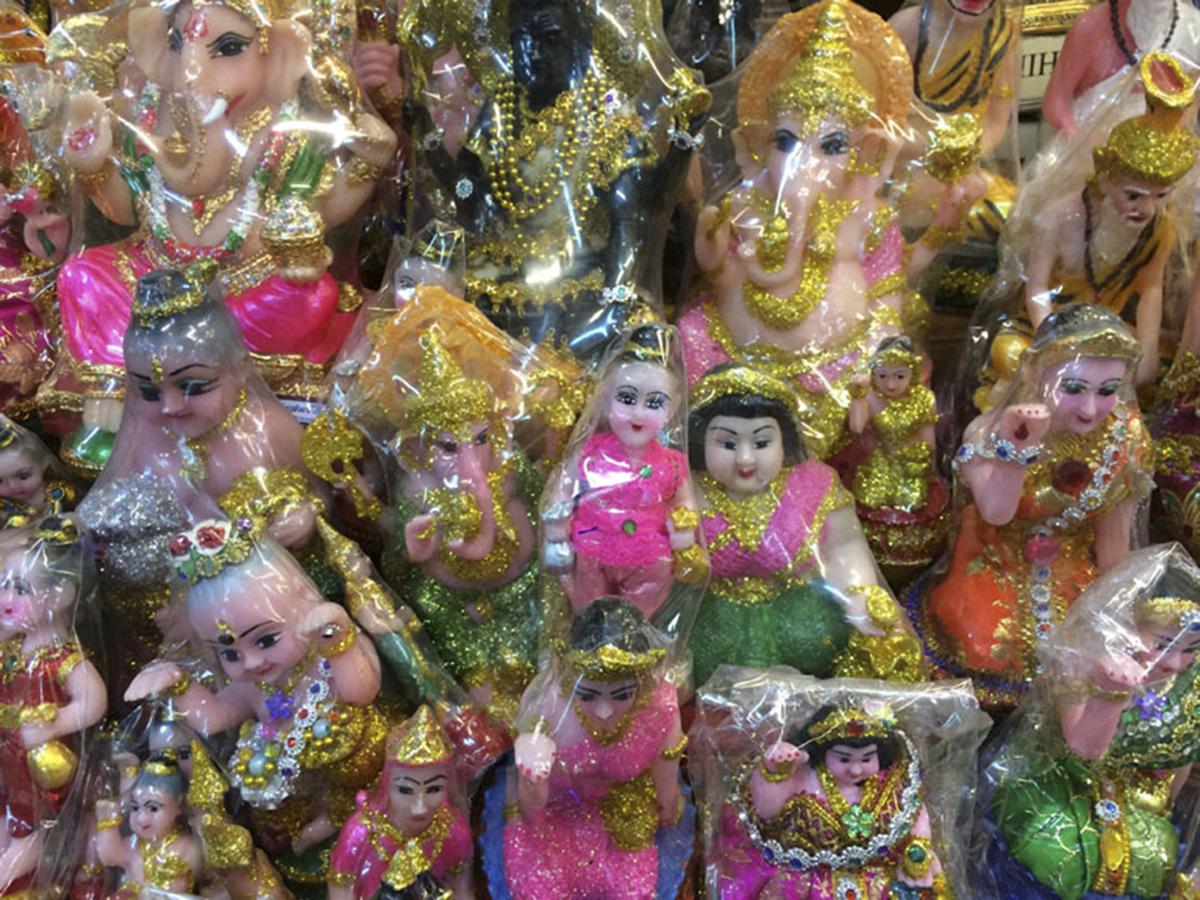 The word “sacred” has an assortment of meanings and contexts today, but when the region in question is Asia, the word generally refers to rituals or spaces. Both these references are the subjects of two current exhibits, one at the Museum of International Folk Art in Santa Fe, and the other at the Rubin Museum of Art in New York City.

The latter show is expertly curated, succinct, and to the point. The Rubin is a relatively new museum —it opened in 2004 — with a focus on Himalayan art. Sacred Spaces, an experiential exhibit, stunningly recreates a Tibetan Buddhist shrine and showcases a video installation of a Jain ritual and a room-length photograph of a mountainous Tibetan landscape (Tibetans believe that landscapes embody life and power).

The shrine room at the Rubin is an inviting space, with flickering butter lamps, faint incense, and the soft sound of chants. Visitors can be seen closing their eyes to absorb the peaceful air. Gilded Buddhist statues gleam in the dim light. The installation is modeled on an affluent household shrine, and the curatorial intent, as expressed on a museum label, is to highlight “the complexity of the art objects shown throughout the Museum, namely that each image has aesthetic, historical, religious, and ritual significance.” At the base of the rectangular room, visitors can sit on a row of stools and experience the ritual context of these ceremonial objects. A single strand of prayer beads hangs from a wall, within reach, for those so inclined.

Sacred Realm: Blessings & Good Fortune Across Asia, an exhibit that opened in February at the Museum of International Folk Art, also recreates a Tibetan altar. Placed in a room with prayer artifacts from other cultures, this altar does not have the same impactful presence as the one in the Rubin. A label on Buddhist practice is in a different room, confusingly separated from the altar by subsections on Islam and Judaism. This way of encountering different cultures in small doses feels like being in the ethnic aisle of a grocery store. To contemplate the sacred, you need some silence and unity of space, none of which accrues when curators jam India, Thailand, Tibet, and China into one room.

A corner glass case is devoted to “Hindu Prayer,” and some of the small-sized Hindu deities are striking. But the collection feels cluttered, perhaps because the organizing principle behind how the deities are arranged is fuzzy. There are identifiable icons, such as Krishna and Ganesh, but no narrative that contextualizes them. The most illustrative aspect here is a photograph, printed on a panel, of an Indian girl in her prayer room.

More photographs might have helped guide visitors through the miasma of cultures presented in the MOIFA exhibit. We could have been given narratives about, say, India being a secular country, or how Tibetan prayer has been impacted by Chinese presence. Instead, our attention is directed to a smorgasbord of objects of varying quality, accompanied by generic labels that begin to sound like New Age hooey. It’s not clear why shamanic masks and a shrine for a dead baby are grouped together under the exhibition subtitle of Blessings & Good Fortune. This catalog approach trivializes ritual objects. Prayer is about going deeper. Is it too much to ask the same of an exhibit, almost half of which is ostensibly devoted to this subject?

Do we go to museums simply to gaze at objects? Is there a deeper meaning to glean? Can the curator do more than present objects? In his 2014 book, Ways of Curating (Faber & Faber), Hans Ulrich Obrist recalls his first meeting with the Italian conceptual artist Alighiero Boetti. “Boetti told me that if I wanted to curate exhibitions, then I should under no circumstances do what everybody else was doing — just giving the artists a certain room and suggesting that they fill it,” Obrist writes. Instead of filling a room with objects, Boetti encouraged Obrist to ask artists about their unrealized projects. “Boetti said curating could be about making impossible things possible.”

The Museum of International Folk Art exhibit is a celebration of what the legendary art historian Ananda K. Coomaraswamy called “aesthetic surfaces” as opposed to “art as a kind of knowledge.” Some objects in the show stand out. An amulet doll from Bedouin culture (circa 1910, historic Palestine), with long black hair and dressed in a faded orange dress, has such presence that you might imagine her in the arms of a little girl today. A terra-cotta fertility figure (circa 1982, Bankura, West Bengal, India) shows a woman holding a baby in each arm, but she has an animal aspect. Her foxlike face projects forward in a deep triangle, as do her babies’ faces — they suggest a mystery that might be worth unraveling, but our attention moves on to the many other objects on view.

It is useful to note that practical considerations are at play here — the objects presented are all from the museum’s own collection. The exhibit begins with a sizable collection of amulets. A placard informs us that throughout Asia, there are “amulets with sacred inscriptions thought to provide protection from harm.” Much is made of the evil eye. A necklace “to protect a child from the evil eye” (circa 1915, Baghdad) seems too large for a child to wear, and it would have been interesting to know if it was meant only for ceremonial use. It might also have been helpful to somehow acknowledge that every culture, in its own way, wants to protect children from the “evil eye” — this is not something that is specific only to “exotic” Asia. A section that follows, on amulet containers, feels repetitive. A room devoted to tattoos adds to the bazaar-like atmosphere.

In contrast, the sparseness of the Rubin exhibit makes it easier to absorb what is presented. On a two-channel video installation, Shravanabelagola by Deidi von Schaewen, we watch as devotees pour offerings over the head and feet of an enormous Jain icon named Bahubali. This sacred ritual occurs every twelve years in Shravanabelagola, Karnataka, in southern India. One screen shows Bahubali’s head — the other, his feet. The images are indelible: The worshippers stand on a balcony rigged up behind Bahubali and pour milk, flower petals, and pigments almost continuously over his head. On the screen that shows Bahubali’s feet, Jain monks (some without a shred of clothing), along with laypeople wanting to gain merit, receive the offerings and sweep the place clean. At one point, they hoist a massive garland up to Bahubali’s neck. German artist Von Schaewen filmed this installation when she attended the ritual as an observer in 2006. The hypnotic work transports us into the center of the ritual.

In the MOIFA show, the section on “Ritual Dance in Bali” showcases film footage from Trance and Dance in Bali, produced by Gregory Bateson and Margaret Mead and shot at the village of Pagoetan, Bali, between 1937 and 1939. While this anthropological work has its place, it feels outmoded, in 2016, to look at traditions in Bali through a distancing lens that portrays the shamanic dancers as the “other.” The use of this video has a patronizing, colonial whiff about it. The Museum of International Folk Art is a publicly funded museum. It is admittedly a treat to have an exhibit about Asia in Santa Fe, but surely we can do better. Bringing together Asia, which is a collection of distinctive cultures, histories, and religions, under one roof of “blessings and good fortune,” is a shallow curatorial construct.

A more organic approach might have been to explore how one tradition — say, Buddhism — has spread its branches in varying forms all across Asia. The Buddha himself supposedly had not wanted to be represented in human form. For a long time, a pair of sandals represented the Buddha. Why is he commonly portrayed as a person today? This is one of many important unanswered questions in the field. Instead, after viewing the Sacred Realm exhibit, we may find ourselves wondering why we gaze so ardently at ritual objects. These ceremonial objects, once used as aids to go deeper, have become a visual fetish: What was meant to open the eyes has become mere eye candy.