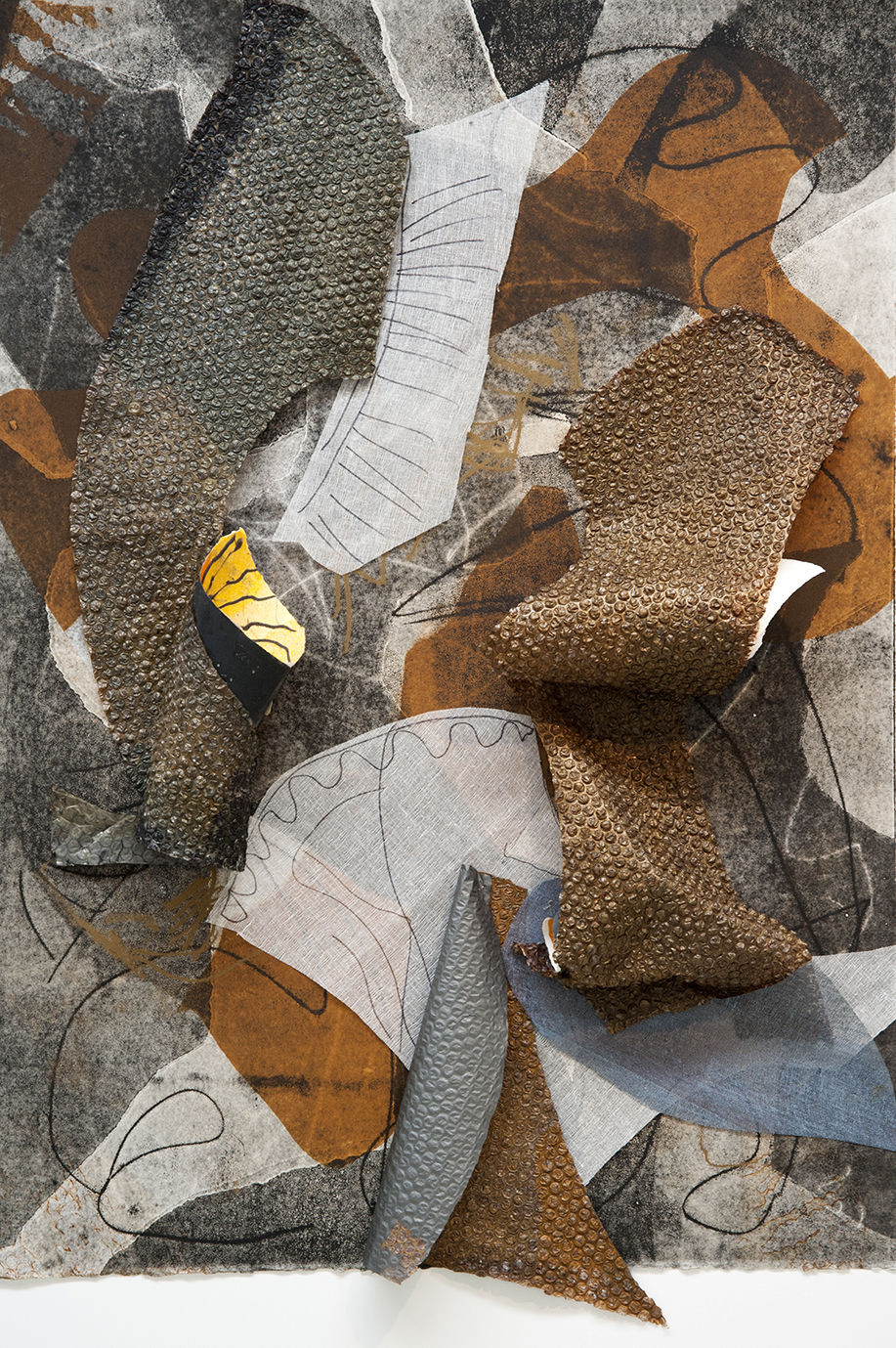 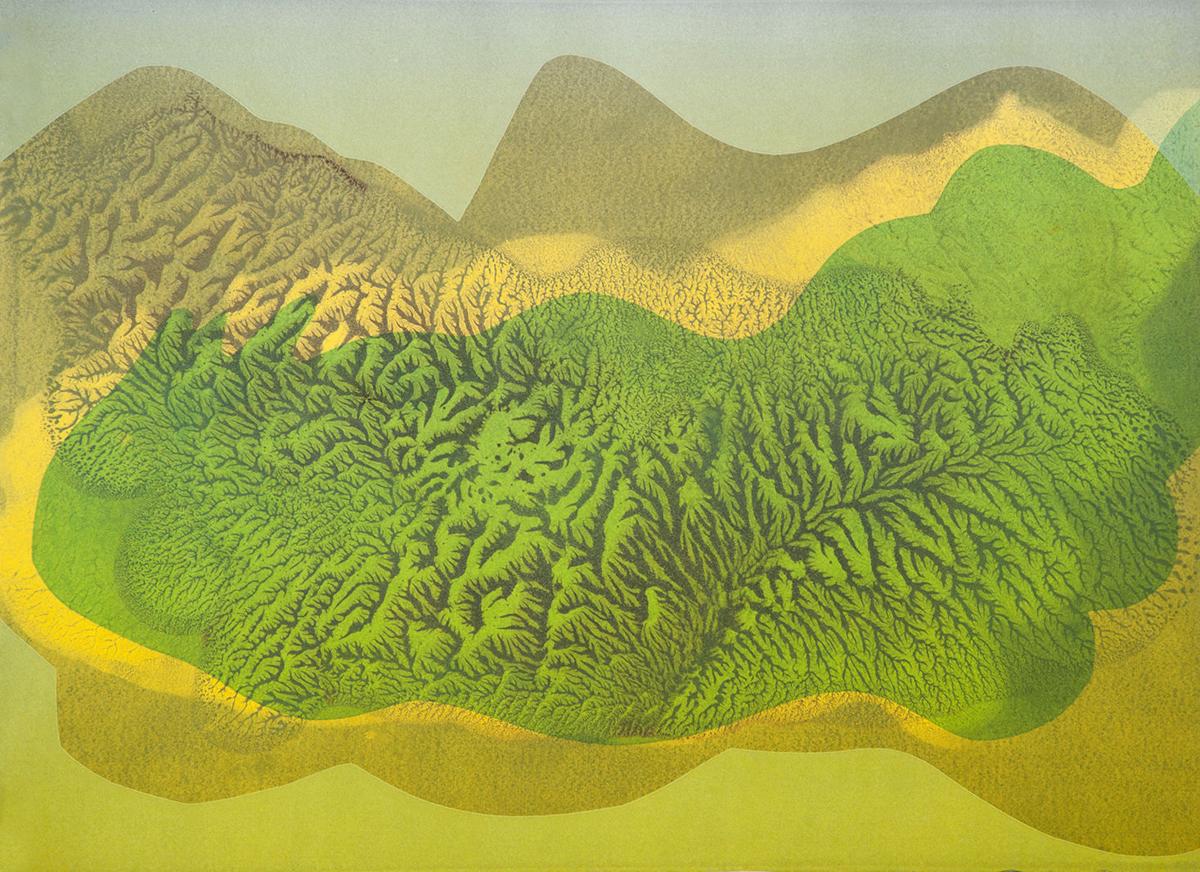 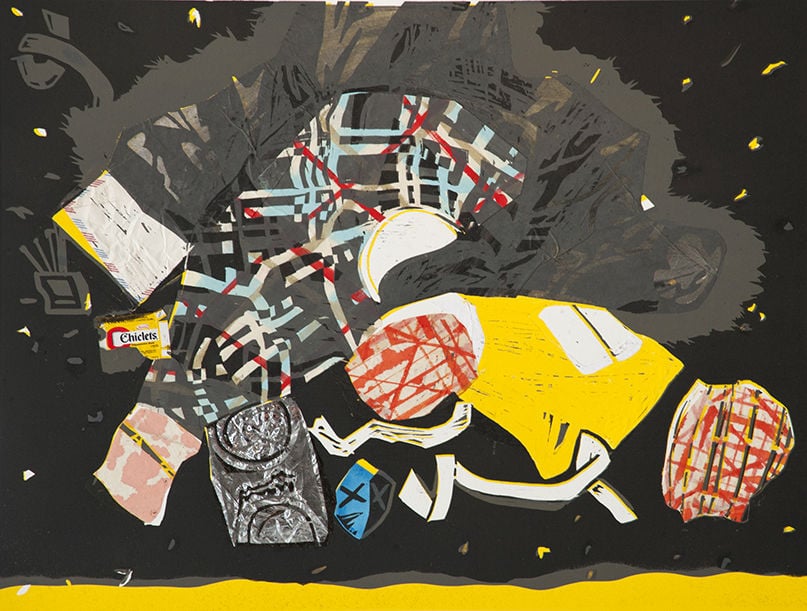 Master printer Marina Ancona opened her Brooklyn print shop 10 Grand Press in 1999 on the site of a former sewing factory. Since that time the business has expanded to include a location in Santa Fe. Ancona’s press is an independent shop for various printmaking techniques, including intaglio, relief printing, and paper lithography. But it’s the monotype that emerges as the strongest print type represented in In Color, a selection of works from 10 Grand Press’ archives that includes artists from the East Coast as well as New Mexico.

Basing an exhibition on the use of color in printmaking does not mean that each print on display is alive with vibrant, striking hues and rich color palettes. While these terms describe some work in the show, such as Angela Dufresne’s monotype of German actress Hanna Schygulla, a painterly composition dominated by a vivid deep blue hue, other works — such as Emily Roysdon’s Ecstatic Resistance (Schema), a silkscreen, and Nicole Eisenman’s untitled woodblock print, a portrait of a crying figure rendered in muted tones with linear traces of pink — make more minimal use of color.

Ancona, who curated the exhibition, keeps examplesof her own art to a minimum, preferring to showcase the works of others. As a master printer, though, she collaborated with many of the artists on their printmaking projects, and her hand is present throughout the show. The same is true for her eye, which tends toward works in abstraction and works that exhibit an uncommon use of materials or form. In Color shows not only the adaptability of color use in printmaking techniques but also the versatility of the printmaking medium itself. The most pronounced examples are the construction prints of Kay Harvey. Harvey’s pieces — from a series of new works — incorporate collaged elements and repurposed materials that extend beyond the borders of the underlying base prints and give them a sculptural component. They have an affinity in that regard with the prints of Italian artist Nino Caruso, also in the show, an artist with a modernist aesthetic whose interest in sculptural shapes and forms translates to his monotypes. Kathleen McCloud, who like Harvey is based in Santa Fe, shows a free-hanging piece in the shape of an article of clothing. The print, Honey Suit, a hybrid monotype and woodcut, seems to reference the plight of the disappearing honeybee.

The show draws not only from a stable of artists known for their printmaking but also from artists who primarily work in other mediums. Kathleen Morris, for instance, whose unnerving monotype Aura has an affinity with 19th-century symbolist art, is first and foremost a painter. Santa Fe’s Noel Harvey is a multimedia artist who does printmaking as well as painting, jewelry, and photography. Her Orange and Seafoam Whale Bones solar-plate print exemplifies her practice of making flat two-tone prints of photographic subjects and allowing the tones to differentiate the various elements within the composition. Brooklyn-based Carrie Moyer, a painter and printmaker, contributes an effective and intriguing use of color in her untitled landscape from 2012. The print is a mountain scene, a stylized rendering of the color changes of mountain flora from base to summit. Here, as in Noel Harvey’s work, the colors differentiate forms: oblong and amorphous shapes that overlap and intersect with one another.

In her selection, Ancona has created an exhibit that emphasizes color as a critical component in conveying visual information. She avoids contemporary examples of Op art, choosing instead more subtle, conceptual works aimed at the head rather than works that fool the eye and are, by their nature, more sensory. The exhibition, originally scheduled to close early in August, has been extended through the end of that month.