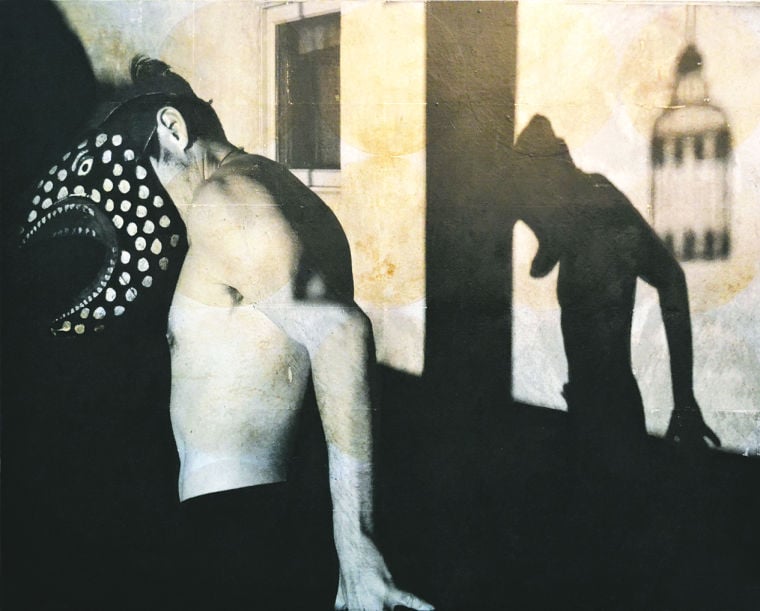 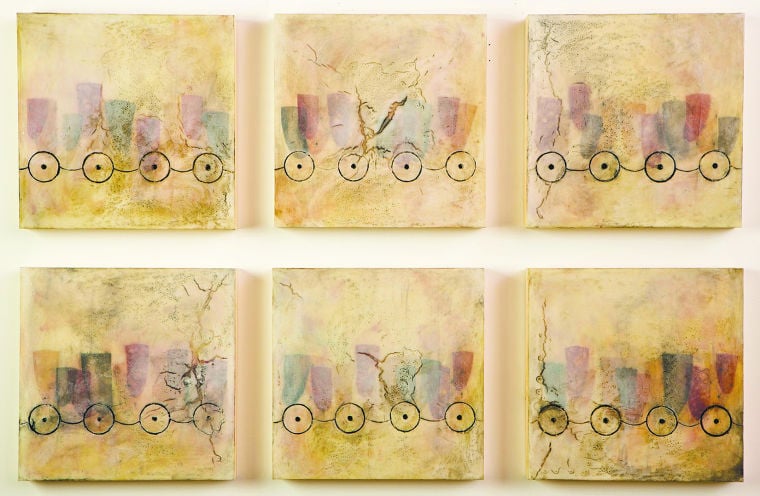 For 2012’s Under 35 exhibit, Zane Bennett Contemporary Art featured a selection of the work of nine artists, many of them gallery regulars. The second Under 35 offers work by four artists: Sonya Kelliher-Combs, Heidi Brandow, Moira Garcia, and Brandee Caoba. Each has a connection to the Institute of American Indian Arts. Brandow, Caoba, and Garcia are former students, and Kelliher-Combs is a current board member. What draws them together for Under 35: Part II is that each works in series, often abstractly, and experiments with materials.

The four gallery spaces on Zane Bennett’s second floor are given over to these artists, and each is shown to good effect. Garcia’s Inside U Abides series greets viewers in the first room. The central image of each of her monoprints is similar — a free-floating coil horizontally spread across the paper, with triangular forms seeming to enter or emerge from the coil at each end — and conveys mood through color changes. The triangular forms are like bodies separated by time and space but connected by the coils, expressing separation and unity not through mathematical formulas but simply with line. Garcia’s images seem to represent a symbolic vision in which forms are reduced to their most basic. In The Universe Inside, a mixed-media work on paper, Garcia uses the same coil form and triangles, but the composition, in which the coil flows between a dark-colored plane and a lighter one, suggests an inexorable bond between the planes. The binary of the planes is joined by the coil, and as with the Inside U Abides series, Garcia seems to have given expression to a universal concept of dual states — past and present, day and night — as mirror reflections of each other or as inextricably linked. The concept of a linkage over time and space is expressed somewhat more directly in Time Traveller, an installation of four wall-mounted works connected by a ribbon of red thread representing a quipu, a knotted cord used historically in Andean cultures for record keeping and notation. Garcia incorporates the dots and lines of the Maya numerical system into the piece. The thread physically connects the four two-dimensional artworks and trails off to the gallery floor, bringing the viewer along a trajectory from the ancient past to the contemporary.

Brandow’s mixed-media work features two distinct sets of images. One is a group of small whimsical monsters. They are cartoonlike beasties, more cute than frightening. Her other works are line drawings, rendered large-scale, that blend topographic maps and schematics with human and animal imagery. These juxtapositions suggest a mapping of bodies. Object: Hand + Mechanism, for instance, depicts the outline of a human hand overlaid with numerical notations, a kind of mechanical schema, a codified body part suggesting a reduction of form to component elements. These drawings are not works on paper but heavy two-dimensional images rendered thickly in a plasterlike material, polished to a smooth glassy finish, and occupying a place somewhere between drawing and painting. Brandow’s are minimalist works concerned with geometry and line. In that, they are like Garcia’s, and the two bodies of work are complementary, although Brandow takes a more figurative approach to imagery.

Caoba’s is the most expressly figurative of the four artists’ work. She uses mixed media, blending collage, photography, painting, and printmaking techniques. Her Smoke and Mirrors series shows a masked man in a suit posed in expressive gestures, like a dancer. The masks he wears are animal faces concealing his true identity and suggesting personae that can be taken on and off like garments. The work also suggests that the animal states from which people attempt to divorce themselves are an inseparable part of human nature — no matter how fine the cut of our suits. The underlying feeling in these images is a haunting, unnerving one of mystery, in which identity itself is a question mark. Her Duende, another mixed-media piece, follows a similar theme of a masked figure; the title references a fairylike being of myth and folklore. The subject is also a man wearing a mask. There is an internal conflict where man seems to struggle against a nature from which he can never truly be separated. This idea is reinforced by the inclusion of Caoba’s Ex Nihilo series, depicting hybrid human and tree forms. One thinks of Ovid’s Metamorphoses and Daphne’s transformation into a tree.

Kelliher-Combs makes unorthodox use of materials, some found traditionally in Native arts, such as porcupine quills and walrus gut, and includes them in work that is primarily abstract but with the suggestion of figuration. Cream Walrus Family Portrait With Qupak 1-6 shows a lightly pigmented group of forms in a cream-white field. The forms are organic and indistinct, as though seen through a haze. Kelliher-Combs references her Alaskan Inupiaq heritage in her art. For example, a qupak is a traditional decorative trim used by the Inupiaq to decorate clothing. In this piece, she reduces figurative elements to outline forms, bodies in nondescript ephemeral landscapes. She builds up her pieces in layers, incorporating organic material into the compositions. Works on paper include Small Drawings, a series of images arranged in a grid, also with a nontraditional approach to material. Human hair is arranged on the surface of each rectangle of paper in linear compositions. Another grid of images, called Double-Sided Drawings, has markings on both sides of thin, translucent paper, so that traces of drawn forms on the reverse show through faintly to become part of the composition.

Under 35: Part II is a balanced exhibition, and there is a flow between the bodies of work, from the minimalism of Garcia’s and Brandow’s largely abstract mixed-media pieces to the more figurative work of Caoba and Kelliher-Combs. The pieces relate to each other while remaining distinct. All four artists commit to reimagined uses of artistic mediums, breaking from traditional and straightforward uses of photography, painting, and line drawing without abandoning them altogether. Under 35: Part II, like the previous show, doesn’t make much of the fact that these are all younger artists; nor should the viewer. These are mature, well-executed, well-developed bodies of work.