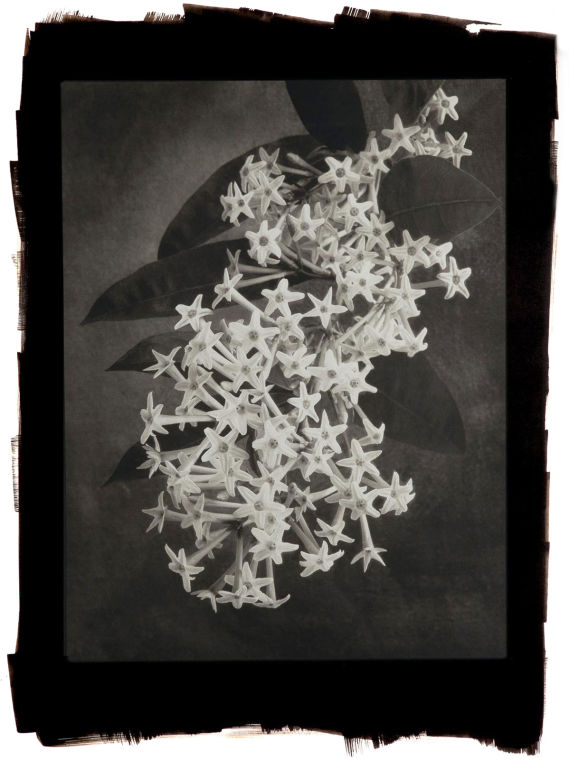 Two bodies of work on view at Verve Gallery of Photography deal with the natural world using different photographic techniques and resulting in contrasting imagery. Cy DeCosse’s Midnight Garden is a series of portraits of night-blooming flowers in toned black and white. Images in Van Chu’s Photographic Brushstroke were made using pigments diluted in water, which he shoots as they dissolve and spread. Some of Chu’s photographs are composites, blending imagery of the pigment with landscape elements.  Midnight Garden’s subjects are rare and seldom seen blooms — such as Queen of the Night, an informal name for Selenicereus grandiflorus, a flowering cactus common to Central America. DeCosse captures fine details in his platinum palladium prints. The flowers, shot in close-up, emerge in dazzling white from darkened gray-toned backgrounds that suggest night. Platinum prints are suited to the pristine beauty of the night blooms because of platinum’s ability to provide a greater tonal range than other methods of printing. The results are large-scale, otherworldly images. Leaves nearly vanish in the surrounding darkness. Their veins, touched by the light, lend the images some linear qualities, as though they are faintly etched in moonlight.

In all, 18 night blossoms appear in the exhibit. These include DeCosse’s Rosa De La Noche, a photo of a tropical water lily known as the rose of the night; Jasmine; Evening Primrose; and Angel’s Trumpet — another name for datura, a toxic plant known as witches weed because of its history as an ingredient in potions. Night-blooming flowers are generally pale and lend themselves easily to black-and-white photography. Some, such as the Argentine giant cactus, bloom only once a year. The cactus appears in an image in the exhibit.

Chu’s Photographic Brushstroke is a painterly explor-ation of ephemeral forms. Unlike DeCosse’s work, Chu’s is not straightforward photography. There’s an element of spontaneity in shooting pigment in water, and he titles pieces in accord with what the mutable, dissolving forms look like. Two Dragons, for instance, depicts two spreading ink tendrils that resem-ble the serpentine bodies of dragons in Vietnamese art from the Lý Dynasty. Other photographs are mon-tages of pigments in water and trees, formed by layering multiple exposures. One such image, Departure 4, shows a tree beneath a bloom of pigment that resembles smoke rising from the tree’s branches. Chu adds color in digital processing to enhance some works and to highlight certain features of the imagery.

Verve’s exhibition makes no explicit thematic connection between these bodies of work, but one is suggested by the subject matter — the primary subjects for each photographer are temporary forms that limit the makers to a time frame for shooting. DeCosse, for instance, is limited to when flowers are in bloom, and Chu is limited to the length of time it takes for pigments to dissolve. Looking at the images together, their distinctions emerge. DeCosse’s photos have a meditative, still quality, while Chu’s are alive with energy and movement and, although some resemble landscapes, are mainly abstracted, dreamlike images. Chu’s use of color is minimal but is still a contrast to the black-and-white prints of DeCosse.

DeCosse’s work, like Chu’s, has some painterly qualities. His use of painted backdrops and old photographic processes often lends his images a feeling of traditional still-life painting, but that is less prevalent in the black-and-white photographs. Chu’s prints have a more contemporary feel. It is best to view the shows as solo exhibitions.