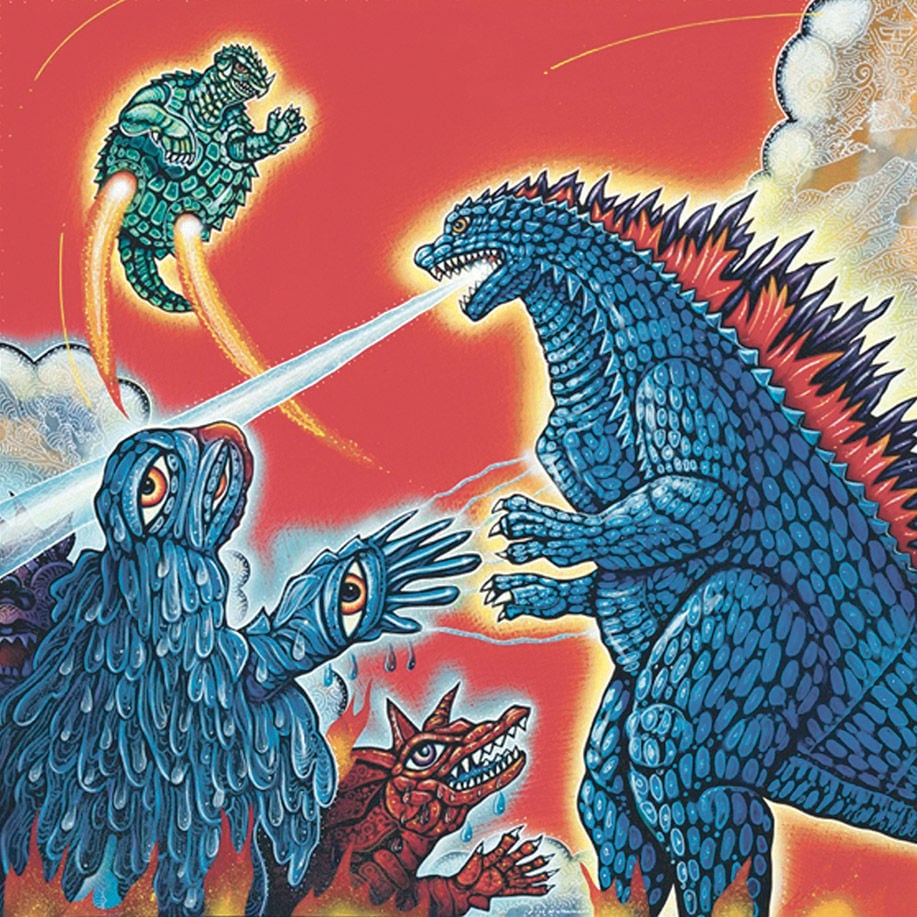 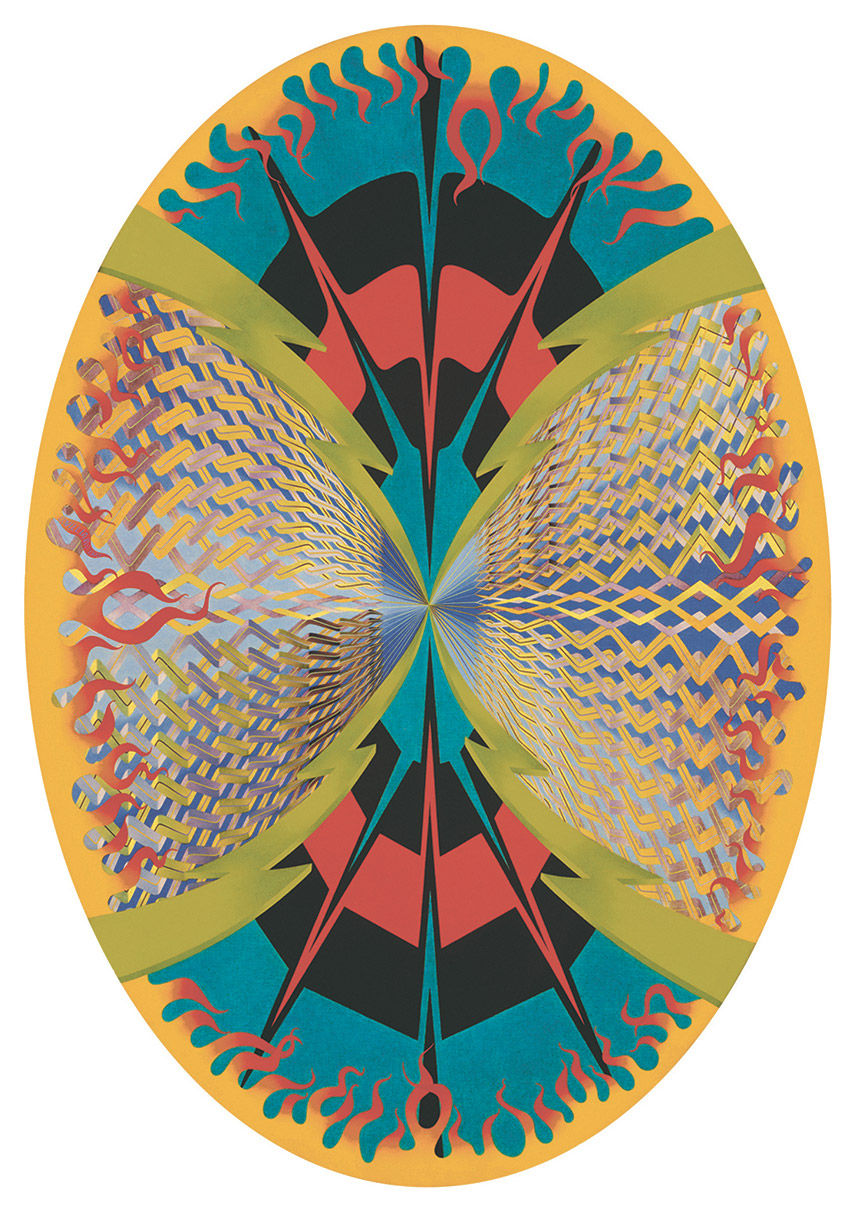 Suzanne Williams: Scallops and Stripes Confined Within an Oval of Flames, 1975, oil on linen; courtesy the artist 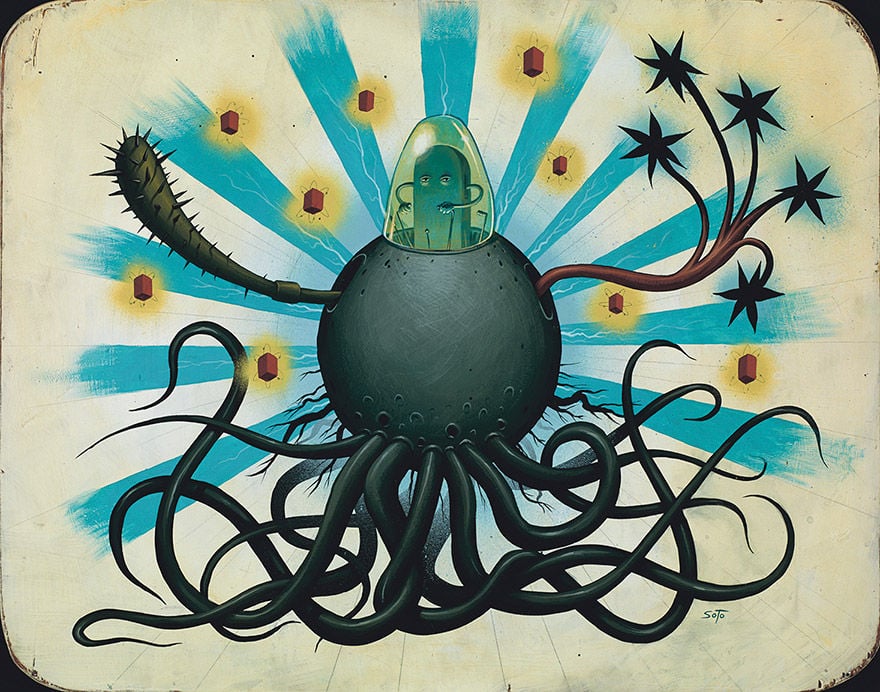 Suzanne Williams: Scallops and Stripes Confined Within an Oval of Flames, 1975, oil on linen; courtesy the artist

When it comes to art, playing the “lowbrow” card could likely conjure visions of Elvis Presley crooning against black velvet backdrops. But what’s surprising about ¡Orale! Kings and Queens of Cool, a four-part exhibition celebrating that category of art (or what’s gaining popularity under the monikers Post-Pop and Pop Surrealism), is that the works themselves are often finely executed, engaging, and, perhaps most importantly, necessary foils for “highbrow” culture. Both terms come from the antiquated “science” of phrenology, where they were used descriptively to separate the intelligent among us, thought to have high foreheads, from the great unwashed. Post-Pop is art for the masses and, like its Pop predecessor, draws heavily on motifs from popular culture.

¡Orale! includes the shows El Tatuaje: The Tattoo in Underground Culture, Pinstripe Madera: Pinstriping as Minimalism, Nuevo Lowbrow: Pop Culture in the West, and Lowbrow Insurgence: The Rise of Post-Pop Art. The show features pieces by well-known California-based artists such as Gary Baseman, Jeff Soto, and Mark Ryden — all major influences in the Post-Pop and street-art genres. Regional artists like Rose B. Simpson, Joel Nakamura, and Dirk Kortz (his solo exhibit, Persistence of Vision, is on view at Wheelhouse Art Gallery in Santa Fe through Oct. 27) are also included.

The photographed examples of tattoo art in El Tatuaje show intricate detail and snaking designs, with human skin as the canvas. And because tattoos are designed in concert with their wearers as a permanent addition to their bodies, they’re instances of personal expression and meaning. Artists like Rich Ives create realistic images. Creating a composition that depicts a seascape teeming with life — as Ives did on a man’s arm, from shoulder to wrist — takes a considerable amount of artistic skill. Such artists are underrepresented in that most esteemed repository for highbrow cultural artifacts: the museum. Despite the surge in tattoos and piercings that took off in the 1990s, marking an entire generation with the inky pigmentation of permanently wearable art, there’s still an aura of illicitness around tattoos. Like lowrider culture, tattoos are an art form of the street. So, too, is pinstriping. Examples of skateboard designs by Toby Morfin, Albert Neri, and Jonathan Mercado are included in Pinstripe Madera. The board shape lends itself to symmetry, and Mercado’s work especially recalls the symmetrical, linear quality of Art Deco aesthetics.

Without the usual market interests that have commodified art and diluted its raw impact, the “lowbrow” genre has flourished. In Nuevo Lowbrow: Pop Culture in the West, there are examples of the ironic, discomforting type of work that stands as a mirror, not necessarily to “good” taste but to the idea of taste itself. Post-Pop is comic, satiric, anarchic, and subversive. Marion Peck’s Bunny Love, for instance, is a lush depiction of an idyllic landscape and a riff on the easy comforts of genre painting and wildlife-themed art in particular. Right in the middle of the canvas, a cute bunny couple mates with fervor — hence the title.

The influence of celebrated cartoonists R. Crumb and Chester Gould (Dick Tracy) are discernible throughout ¡Orale! Examples of their strips, along with art by Pogo comic creator Walt Kelly and Peanuts’ Charles M. Schulz, are a reminder that the popular medium of the comic is among Post-Pop’s greatest legacies. Zap Comix contributor Robert Williams’ 1977 painted sign Hey Pal, Nothin’ Is Free!, which depicts the leering, manic face of Ed “Big Daddy” Roth’s hot-rod character Rat Fink, stands as the antithesis of Walt Disney’s Mickey Mouse. If the comic is the granddaddy of lowbrow art, its unsung heroes are cartoon characters and B-grade movies and its villains are such tropes as retro images of gender inequality, the well-adjusted nuclear family, and ads from the ’50s and ’60s (unless they sell products like Twinkies — Margaret Kasahara’s portrait Twinkie the Kid is a memorial to the snack cakes whose production was temporarily ceased in 2012). Soto’s Twelve Armed Octopus has a retro, cartoonlike appeal. In Nuevo Lowbrow, Conrad Cooper’s painting Whiskey Tango Foxtrot is a baffling re-envisioning of Francisco Goya’s The Third of May 1808. Gone are the executioners from the Spanish painter’s original; they’ve been replaced with the massive disembodied head of Star Wars robot C-3PO. You can almost hear him exclaiming “Oh dear!”

In Lowbrow Insurgence, Howard Hallis’ The Picture of Everything presents a mind-blowingly encyclopedic amalgam of pop-culture references. Many of them come from the realms of film and television and are crowded on a panel that’s divided into eight sections. How much of “everything” is contained in The Picture of Everything? Here’s a partial accounting: Homer Simpson, the “Man” effigy from Burning Man, the kabbalah’s tree of life, astrological symbols, Betty Boop, Stonehenge, the great pyramids of Egypt, the flaming horn from René Magritte’s The Discovery of Fire, Star Wars’ Millennium Falcon, Star Trek’s USS Enterprise, the Space Battleship Yamato, comic-book covers, the Jetsons, Mickey Mouse, the Cat in the Hat — you get the point. The endlessly diverting work stuns with its vast inventory of iconic appropriations. The piece has an added twist of existing as a large-scale lenticular collage, which imbues it with an illusory quality; this, one surmises, is the point.

At the center of the Lowbrow Insurgence exhibit is Esteban Bojorquez’s monumental sculpture Mr. Bends, an oil-dripping humanoid figure clad in a heavy-booted diving suit and rising like a phantom from Davy Jones’ locker. The title of course refers to decompression sickness, a life-threatening condition that can affect divers ascending from great depths. Accompanying the figure is a lavishly crafted book, opened to the story of Mr. Bends, which is written in limerick style. The figure itself is a Post-Pop demigod, breaking through the highbrow art world’s bulwark (again, the museum) to say, “Account for me.”

¡Orale! is former Harwood curator Jina Brenneman’s swan song and a fitting cap to a run of accessible shows with mass appeal that, more often than not, championed emerging artists instead of trading on big names to draw crowds. The show, which features more than 150 pieces, is well worth the trip to Taos, though the aesthetics and skill levels of the 70 artists represented can vary wildly.