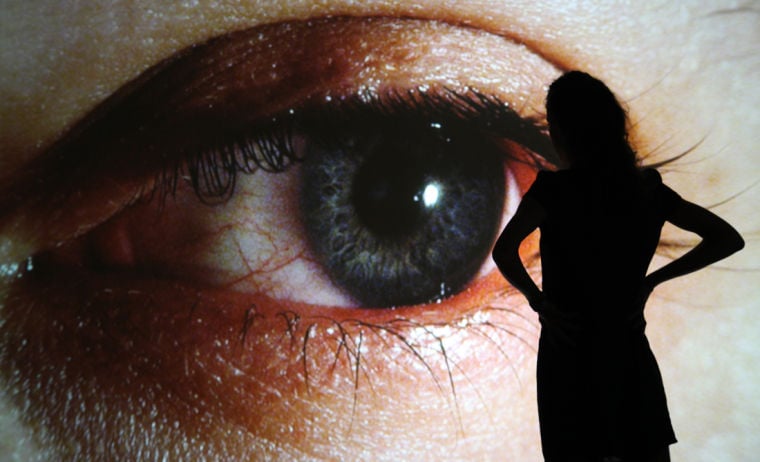 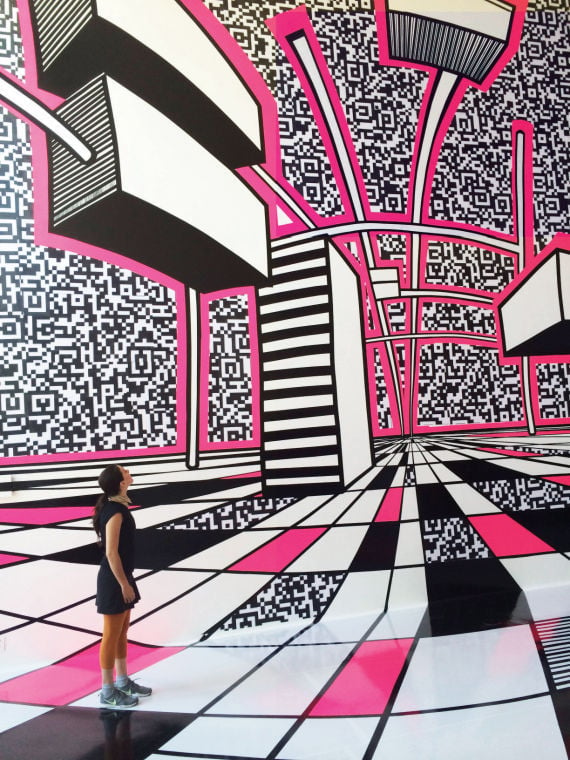 Digital communication brings assumptions of precision and of crisp, immediate information exchange. If you “like” something on Facebook, for example, a thumbs-up icon quickly and clearly announces your preference. But the exhibition Digital Latin America, on display at 516 Arts in Albuquerque, is about digital communication that confuses, complicates, and raises questions — about language, the definition of art (or is this science?), the preservation of culture, and the morality of what we do and disseminate in the digital realm.

Seventeen artists — from Argentina, Brazil, Chile, Colombia, Mexico, Peru, the Navajo Nation, and the United States — are featured in the exhibit: 15 at 516 Arts and one each at the Albuquerque Museum of Art and History and the University of New Mexico Art Museum. Their media range from textiles to dictionaries, computerized surveillance systems, smart phones, pinto beans, and pantyhose. Many of the works have sound — machines “speaking” to one another or the driving beats often associated with Latin pop — or video, and most invite, or require, at least some participation from the viewer.

That participation is unsettling from the start. Upon entering the downtown gallery, visitors behold a two-story mural called Hemispherical Immersion by Jessica Angel. “Can we fantasize that we are as teeny as a living megabyte, sightseeing through the superhighways of information?” the wall plaque reads. The viewer will have no doubt about the answer when observing a flat work that feels three-dimensional, with black-and-white blocks and squares that look like QR codes seeming to shoot out from the wall and a “floor” that appears to go on forever. Viewers might as well be video-game characters perpetually stuck on the same level.

On the gallery’s second floor, a plasma screen features an extreme close-up of a calmly attentive human eye. It’s a disturbing image to begin with, but it becomes more distressing when the viewer moves and the eye follows. Mexican-Canadian artist Rafael Lozano-Hemmer developed the piece eight years after 1984, the year George Orwell warned about, when Big Brother would be watching, and 21 years before we found out, from former CIA systems administrator Edward Snowden, the extent to which the National Security Agency actually has been watching. Part of the thrill of the digital age is the casual voyeurism it invites. Sixty years ago, Jimmy Stewart’s L.B. “Jeff” Jefferies used binoculars to spy on his neighbors in Alfred Hitchcock’s Rear Window; now we just need Google and a clickpad. It’s tantalizing and feels harmless, but Lozano-Hemmer’s work reminds us that, even in an art gallery, our presumption that we are always the viewers is a foolish one, and viewing is never an innocuous act.

Our complicity in the digital age’s ethical sketchiness was a recurrent theme during the exhibit’s two-day opening symposium, which took place earlier this month at the Albuquerque Museum of Art and History. During a presentation on the YouTube-savvy Ecuadorian pop star Sisa Toaquiza, UNM professors Miguel Gandert and Enrique Lamadrid questioned how digital art can be best used to contribute to the global community. Pablo Helguera, an artist who works in various media and directs adult and academic programs at the Museum of Modern Art in New York, discussed how society’s focus on the future enables ignorance of the past and of cultural history.

During his symposium talk “Globalization of Information and Communities,” filmmaker Alex Rivera outlined some of the ethical concerns specific to Latin America. In his movies, Rivera probes the relationship between the migration of people across borders and the borderless technological migration of information. In the futuristic, science-fiction film Sleep Dealer (2008), workers in Mexico who are unable to cross the border remotely operate robot counterparts in the United States. They are thus migrant laborers without the migration. “The Latin American reality, especially in terms of how it’s connected to the American reality, is uniquely capable of being depicted through digital metaphors,” he said. “The connectivity between north and south, the dynamics of immigration ... really avail themselves to being read through the digital vocabulary.”

Many of the artists in Digital Latin America address such moral ambiguities directly by using their works to raise social awareness. Activism courses through the exhibit, countering the creepy aspects of the digital world with clear proof that it can just as easily be used for good. The video project Cinema Lascado (Chipped Movies), by Giselle Beiguelman, documents the desolation wrought upon landscapes in the artist’s home country, Brazil, by the construction of massive elevated expressways. For Maquila Región, Amor Muñoz (Mexico) created a mobile electronics- and textile-producing factory that travels to poverty-stricken areas in Mexico City offering workers $8 an hour. The products created are appended with codes that activate web pages, on which the names of the workers are declared, along with other details about how the products were made. Eight dollars an hour is a low wage by U.S. standards, but it far surpasses the earnings of workers in maquilas along the U.S.-Mexico border. Visitors to 516 Arts can see a replica of Muñoz’s factory, watch a video of the factory’s movement through Mexico City, examine two textiles produced, and touch the information codes.

Gabriel Vanegas (Colombia) and Matt Garcia (U.S.) both explore attempts to preserve lost or dying languages. Vanegas conducted interviews with indigenous people in Colombia, Ecuador, Bolivia, and Peru, the sounds of which emanate from his installation, The Lost Sounds of the Quipu. The frequency of these sounds correlates to the structure of the quipu, an ancient means of Andean communication that consisted of a cord with knots that conveyed coded information. Garcia’s installation Community Language Space (CLS) draws a parallel between linguistic diversity and biodiversity. A partitioned space allows the viewer to watch videos of people speaking Tewa, a language native to several Northern New Mexico pueblos. While the viewer repeats the words, his or her photo is taken, creating a kind of immersive linguistic photo-booth experience. (Garcia’s work is not the only one in the exhibit to originate outside of Central or South America. Mirroring the internet’s erasure of borders, the exhibit muddies the northern border of Latin America and features several works from the U.S. Southwest.)

Digital Latin America is not an indirect, roundabout exhibit. It forces confrontation — with social concerns, with sensory overload, with oneself. Yet the exhibition is galvanizing rather than bleak. There is no dearth of humor, as in Argentine artist Paula Gaetano-Adi’s videotaped attempts to “literally” eat definitions in her Spanish-English dictionary (Pica) or Jessica Pizaña Roberts’ taped presentation featuring a “Rosarita” character who gyrates and pulls burritos out of a dress made of beans.

Given the exhibit’s disorientation, even its fundamental conceit introduces questioning: What is it about Latin America’s digital landscape that distinguishes it from that of another region? After all, the internet may be the single greatest force of globalization in history, and globalization encourages sameness. The exhibit does not shy away from general themes — immediacy, interconnectivity — that could just as easily appear in a broader show. Instead, it tosses these concepts in with others pertaining to geographically specific economies, cultures, and infrastructures. If the result is a complicated jumble, it is a riveting one.