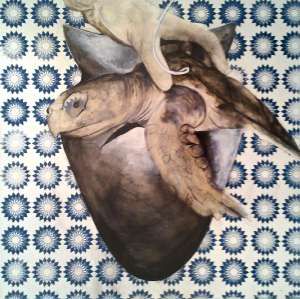 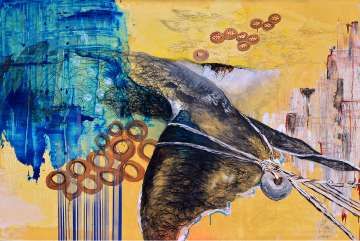 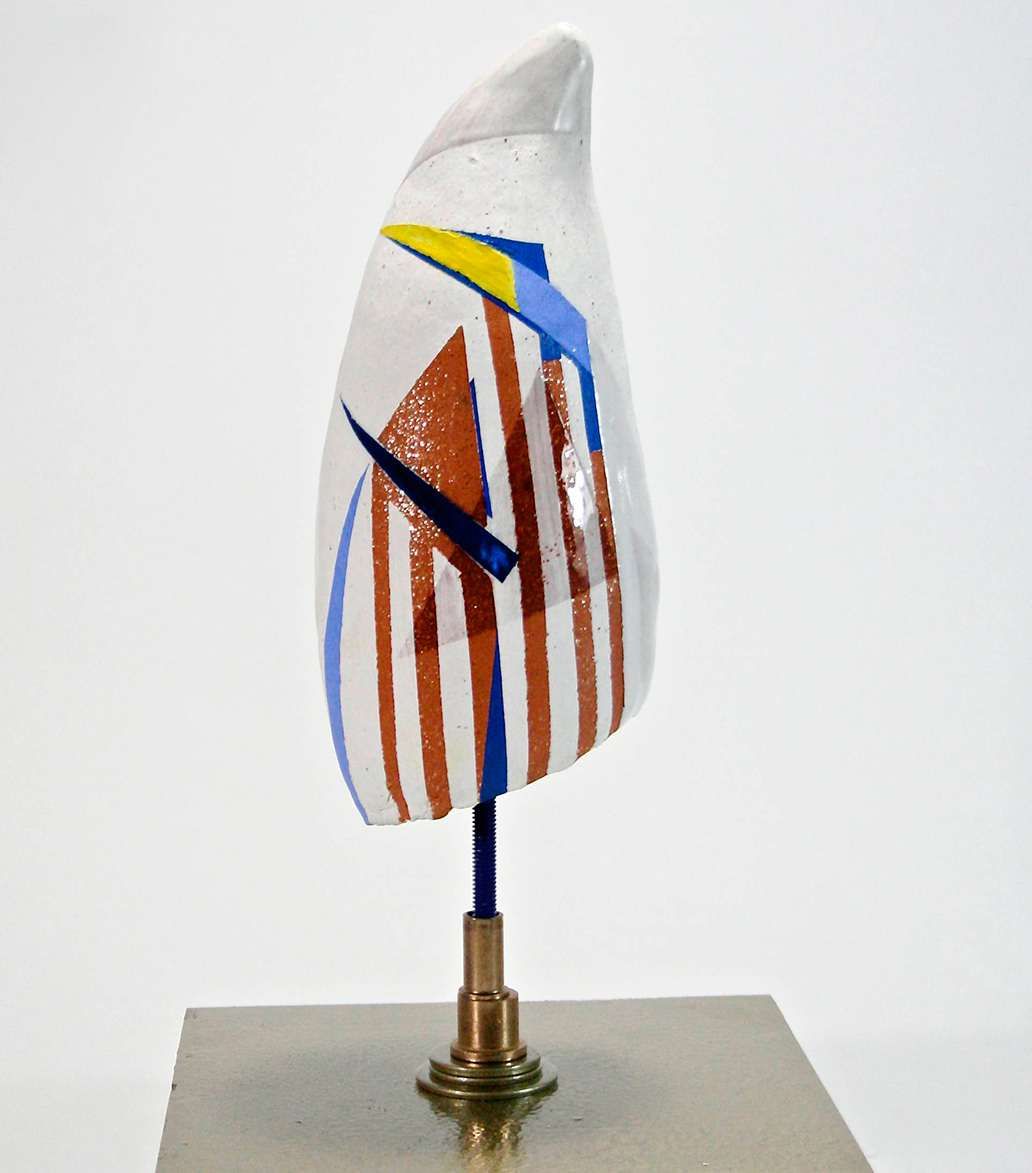 Most of the work in Level/Land, on view in the Museum of Contemporary Native Arts’ Lloyd Kiva New Gallery (located in the museum store) is informed by Shinnecock artist Courtney M. Leonard’s exploration of word meanings. Each piece is designated by a single-word title, playing off the multiple meanings of words in English.

This show, one of the museum’s two interrelated exhibits of Leonard’s art, includes ceramics, mixed-media paintings, and jewelry. One particularly handsome installation, Sustenance, is a series of hand-painted ceramic vessels set in handcrafted wooden display cases. Its title appears to refer to drinking vessels or libations — perhaps some form of offering. But for Leonard, who decorates each vessel with maritime imagery, specifically whales, sustenance also refers to our dependence on natural resources; some of the pieces in Level/Land address our misuse of water and the effects of that on ecosystems and marine life.

The Shinnecock are coastal; their nation is situated on Long Island, New York. Level/Land references the tribe’s name, which, according to Leonard, translates to mean “people of the level land.” The artist’s use of whale imagery is a nod to one of her culture’s legacies: in the 19th century, men from the seafaring tribe worked in the fishing and whaling industries. This show and its companion, Breach: Log 14, attest to Leonard’s deep interest in whale behavior and our relationship with these mammals. Her passion took her aboard a national historic landmark, the whaling vessel Charles W. Morgan. One of the oldest commercial ships in the U.S., it was built in 1841 and was in operation for 80 years. Leonard also embarked on a two-week artist-exchange program in New Zealand before becoming an artist-in-residence at MoCNA earlier this year.

Her figurative mixed-media paintings display gestural, fluid lines that lend them an abstract quality. Bound shows only the tail of a whale caught in a buoy line. There’s little attempt at realism in her depiction, which exudes a hand-drawn quality that can be seen in the dark scribbling that forms the whale’s tail. A large blue splotch of dripping paint suggests the ocean.

Circular forms and coiled lines are part of the visual lexicon Leonard returns to in other pieces. Breach: Log 14 consists of an installation with two components — a series of painted panels and, on an opposite wall, a collection of ceramic sperm whale teeth displayed in a lighted recessed case. The painted panels share themes in terms of color and form but otherwise stand as separate compositions. Coiled, linear, and circular forms are consistent from one panel to the next. The ceramic teeth in the installation opposite raise questions about animal parts bought and sold as commodities. They rest on a bed of hay that suggests packaging for shipment or a sad reduction to the status of museum artifact — that is the fate of scrimshaw works, engravings that were commonly made from either ivory or the teeth of sperm and other whales.

The hornlike shape of teeth is a form that appears several times in Leonard’s work, most notably in her Scrimshaw Studies —polished clay pieces bearing designs ranging from the abstract to the representational. These sculptures rest atop brass fittings that look like they might have come from antique navigation instruments. Some of her designs in Level/Land are derived from traditional Shinnecock tattoos, but the pottery itself is made from regional micaceous clay.

Leonard grew up in the Hamptons, a neighbor of clothing designer Calvin Klein. Fittingly, a few of her mixed-media paintings use imagery from fashion ads. Rendered as outlines in a style reminiscent of Pop art, the bodies, posed as they might be in a photo spread, have the heads of migratory sea gulls. The reference is to the seasonal flow to the Hamptons of visitors and part-time residents, many of whom show up for the Hampton Classic horse show that coincides with the annual Shinnecock powwow over Labor Day weekend. The paintings are a wry take on an indigenous person’s observations of life in that superlatively upscale region.

At times, as inBound, Leonard’s paintings deal specifically with the environmental consequences of human activities. Blanket, a painting of a suffering turtle attached to an IV line, makes a less-than-subtle allusion to the calamitous 2010 BP oil spill in the Gulf of Mexico. The work’s background pattern derives from BP’s logo, but it also references, as the title suggests, Native American star blankets and quilting traditions. Leonard is a member of her tribe’s Turtle Clan, making the painting’s central image a familial reference as well. Rather than reading as a condemnation of the London-based company, however, the image aims to evoke healing and aid in disaster — an underscoring, perhaps, of the symbiotic relationship between humans and other animals. Leonard seems to approach these species with similar reverence and respect, even as she professes through her art some discomfort at the impact of the one on the other. Her approach is often too oblique to be considered true social commentary or activism: she is instead an observer or witness, imbuing her art with a multitude of meanings.