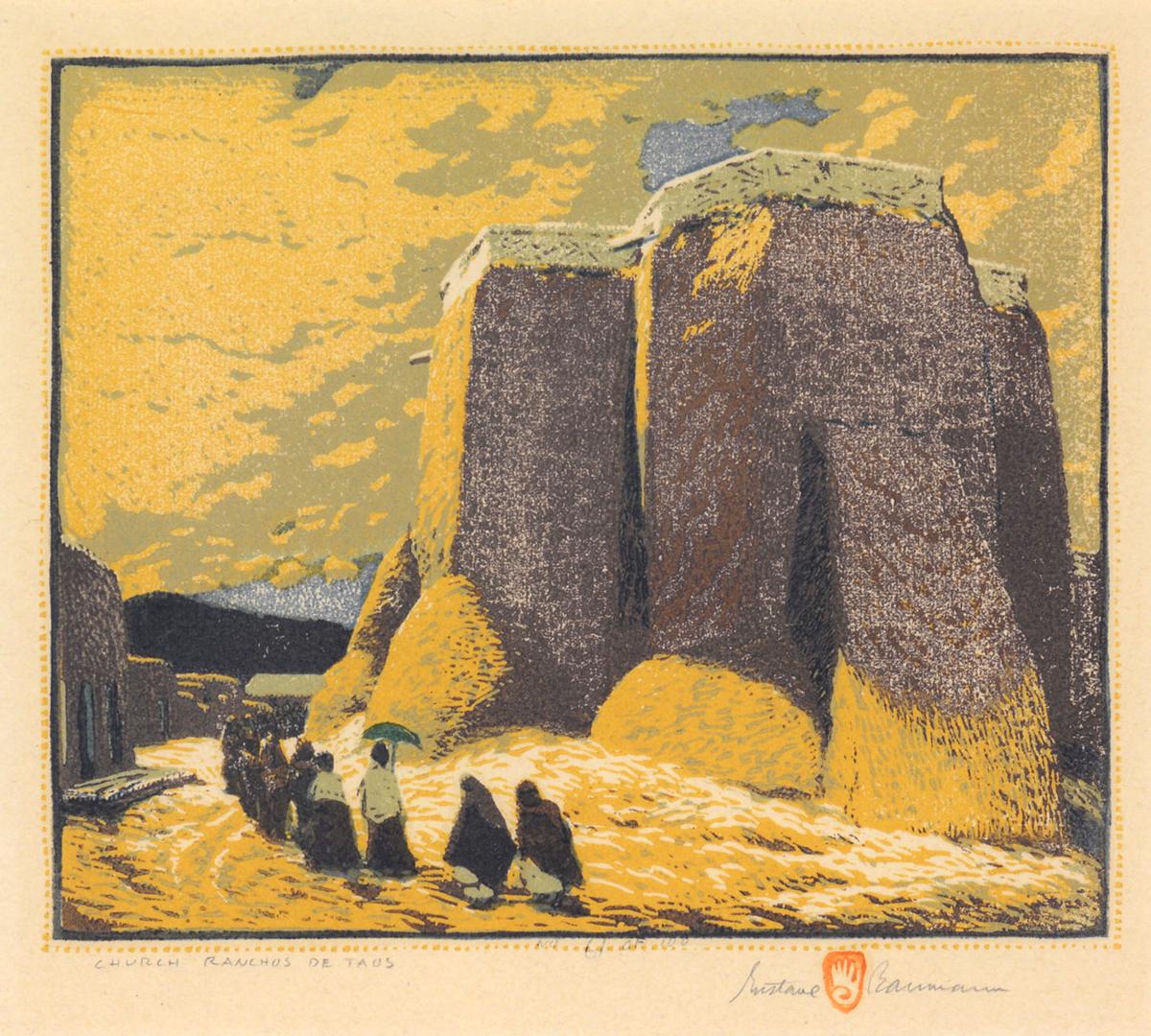 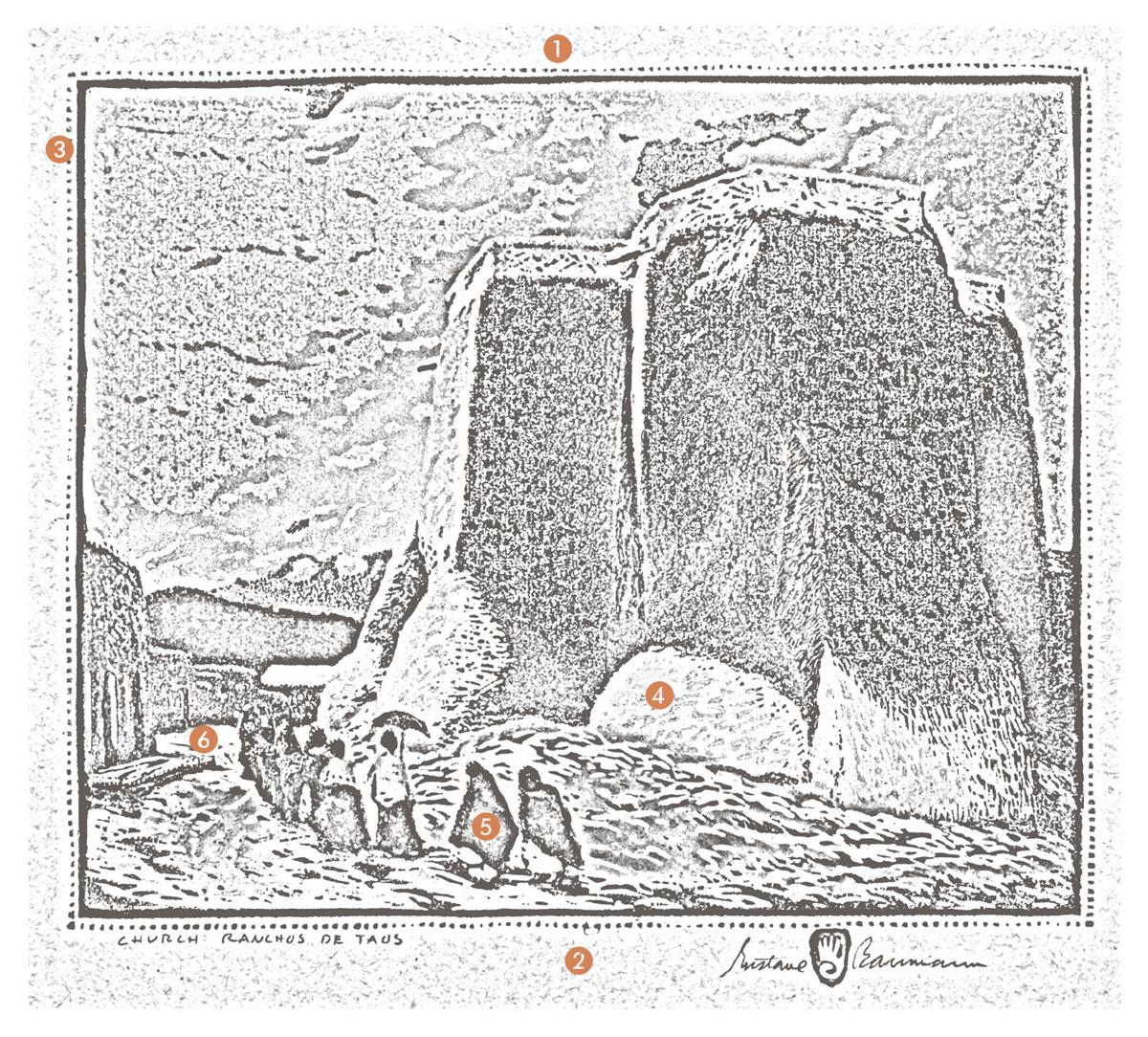 Few color woodblock artists of the 20th century could match the artistry and sheer output of Gustave Baumann. A consummate and prolific artist, Baumann was a master of the craft. Known for imagery that captured the idyllic aspects of the places where he lived, and that hold a bewitching allure for the viewer, his prints are widely sought to this day.

Born in Magdeburg, Germany, in 1881, he emigrated to the United States at the age of 10, settling with his family in Chicago. Throughout his early career, he created bodies of work in Munich, Germany — where he went to study at age 23 — and in Illinois, Indiana, New York, Massachusetts, Arizona, and California. The majority of his life, between 1918 and his death in 1971, was spent in Santa Fe.

An exhibition of more than 160 of Baumann’s color woodcuts opened at the Gerald Peters Gallery in January. It was originally scheduled through May 4 but was extended through the end of the year. Visitors to the gallery’s website (gpgallery.com) can view an online catalogue of the works in the exhibition, which range from his pre-New Mexico periods to the vibrant and enchanting florals, landscapes, and pueblo scenes of the Southwest, which he made in New Mexico and that are among his most accomplished works.

“Gustave Baumann’s woodblock prints have long been admired for his exquisite use of color and his modern compositions, not to mention the extraordinary craftsmanship that goes into creating each image,” says Ana Archuleta, executive art assistant at the gallery. “Gerald Peters Gallery is fortunate to have such an extensive collection of prints that allow an in-depth study of his technical and stylistic evolution from his early days in Brown County, Indiana, to his mature work done in Santa Fe.”

Among the works on view is Church Ranchos de Taos (1919), which was one of his most popular color woodblocks at the time it was made. It depicts a procession outside the San Francisco de Asís Mission Church, whose construction was completed in the early 1800s, and the composition is dominated by the building itself. Rustic and spare in its architectural style, the church appears as though it was hewn out of rock like some megalithic monument.

The print is from the second of three editions he made over a span of decades. Significant changes were made to the composition from one edition to the next. The changes reflect his growing confidence as a printmaker and offer a unique glimpse into the seminal artist’s working process over the course of his life.

In her catalogue raisonné, In a Modern Rendering: The Color Woodcuts of Gustave Baumann (Rizzoli Electa), editor Gala Chamberlain writes that, by the mid-1920s, Baumann was driven to create new editions of his most in-demand prints, including Church Ranchos de Taos, to replace his rapidly depleting inventory. Although the print at Gerald Peters Gallery is undated, the paper, edition size, and handwriting on the print suggest 1924 as the year he started his first print run for the second edition.

Taking our cue from the procession of congregants that makes its way from the rear of the church to its interior, our breakdown goes from the outside in, examining at the margins and materials first, then the composition. ◀

Circa 1924, Baumann was using a cream-laid Bergisch Gladbach paper made by the J.W. Zanders Company in Germany. It was composed primarily of cotton, flax, and jute. Although not clearly visible in this print, the Bergisch Gladbach papers were watermarked with a stylized lion or griffin that appeared in the lower margins. By 1928, Gala Chamberlain says, he was using papers that he ordered specially from the same company but that carried a custom watermark based on his own hand-in-heart design. It was a variation of the design he used for his chop mark, which is the stamped design in the margins that identifies the printer or workshop.

2. The title, signature, and edition number

Although Baumann’s cursive signature didn’t change significantly from the first edition to the second, his titles did. In the first edition, the first three words were written in cursive, with the fourth word, “Taos,” written in block letters. This is noticeably changed in the second edition print where the title is entirely in cursive. Baumann spent his first summer in New Mexico in Taos where he fell in with members of the Taos Society of Artists. Although he would soon relocate to Santa Fe, where he was attracted by the open-door policy of the Art Gallery of the Museum of New Mexico (now called the New Mexico Museum of Art), he became an associate member of the society in 1922.

Baumann’s placement of the edition numbers of his prints changed, too. In the first edition, it’s centered in the lower margin, just below the border of the image. In the second, it’s still centered in the lower margin but placed inside the dotted border. It identifies the print as number 61 out of 100 for this edition. “That was the highest number I found,” Chamberlain says. “There could be more but they’re so dispersed, or they could have just been destroyed.”

In the first edition, the composition is set inside a double border composed of a dark, heavy line surrounded by a lighter, yellow one. In the second edition, the darker interior border remains but the outer border is composed of a dotted line that’s rendered in an orange color, matching the color of his chop mark. The dotted line would have been set into the woodblocks he used. In the third edition, the dotted line remains but the darker border is noticeably absent. “You can see the space between the dotted line and the actual image,” Chamberlain says. “That’s from the removal of that heavy line on all the blocks. When you look at other printmakers of the time, like William Rice and Frances Gearhart, you’ll see a heavy, solid border around their images. It’s like it’s a safety net for them if they misregister the blocks.” More than a decade passed between the first print run of the second edition and the third. In that time, Baumann honed his craft to a higher degree. “He became so proficient that you can tell he no longer needed that device at all on his woodcuts.”

Moving to the top of the building, a second waterspout can be clearly seen on the far left side of the structure that’s absent in the earlier edition. Baumann had an atypical sense of color, which is part of the unique attraction of his color woodcuts. Here, the church is rendered red and purple, resting heavy beneath ochre and sage-colored clouds.

The line of congregants snakes its way from the back of the church toward the front. The same red/purple color of the church was used for the people. But, for the stragglers at the end of the procession, he used some touches of sage green for their shawls and dresses. The sage green matches the roof of a low, distant building, the porch at the far left of the composition, the crown of the church, and the darker parts of the clouds. One member of the procession carries a green umbrella. It’s an odd touch because that darker green doesn’t exist anywhere else in the print. “It does appear that he touched in the color,” Chamberlain says. “It’s not unheard of in his prints. I’ve had conservators complain that they put Baumann’s work in a water bath to lift the acidity out of the paper and some of the color disappeared. I couldn’t figure out why that would be. And then I started discovering hand-coloring on some of the prints. That’s what lifted away in the baths, not the printed colors where he combined the prints with an oil or varnish base.” But it’s entirely conceivable that Baumann did carve a separate block just to print the umbrella, only touching it up by hand when necessary. He was known for his painstaking attention to detail and was consumed by his studio practice. “His wife and daughter weren’t welcome in the studio. He didn’t want visitors in the studio. He didn’t want any interruptions. He was driven.”

The first edition of the print is dominated by yellow. There’s no trace of the white, which appears here along the ground surrounding the church and on the parts of the roof facing the sun. It could easily be mistaken for snow. “Someone who owned one told me that they were told that it was Baumann’s only snow print,” Chamberlain says. But in talking with Martin Krause, curator emeritus of prints and drawings at the Indianapolis Museum of Art, she heard another interpretation. “Marty said that he would have made the tempera study for this in the summer of 1918. I think he’s more reflecting the light off the soil than indicating snow.” The umbrella, or parasol, also suggests that the scene is set in a warmer season.

Great breakdown! Hoping to get to beautiful Santa Fee soon!

I did examine the print and note that all the women are quite bundled up- the parasol could have been a sun shield in cold weather- but whether the "white" is snow or not- can still be debated. Claudia Hess, Hess Art Advisory

Thank you for this deconstruction, if that is the right word, of a Baumann painting. What a stimulating way to start another day in lockdown. I will visit the Peters gallery as soon as it reopens.