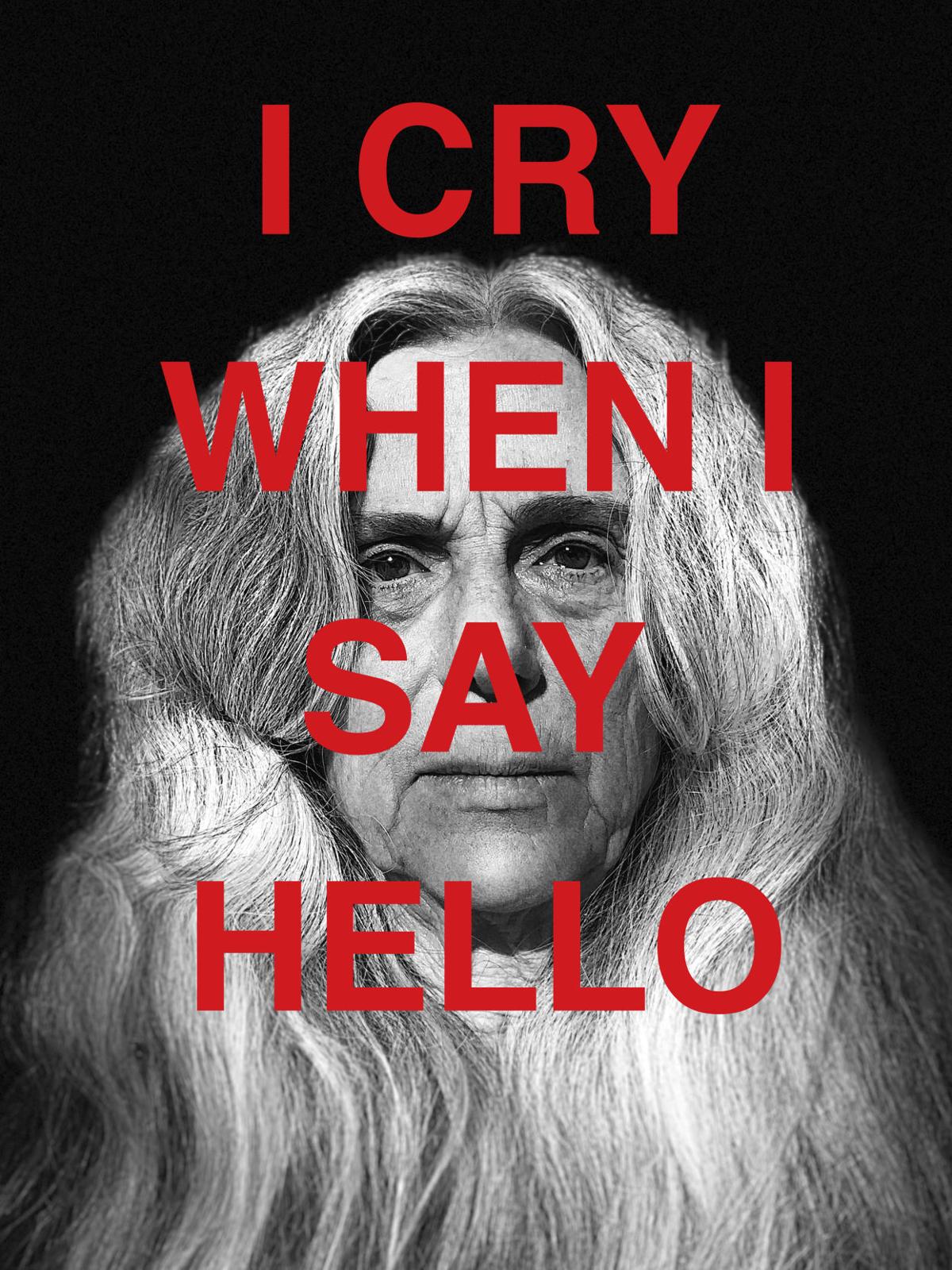 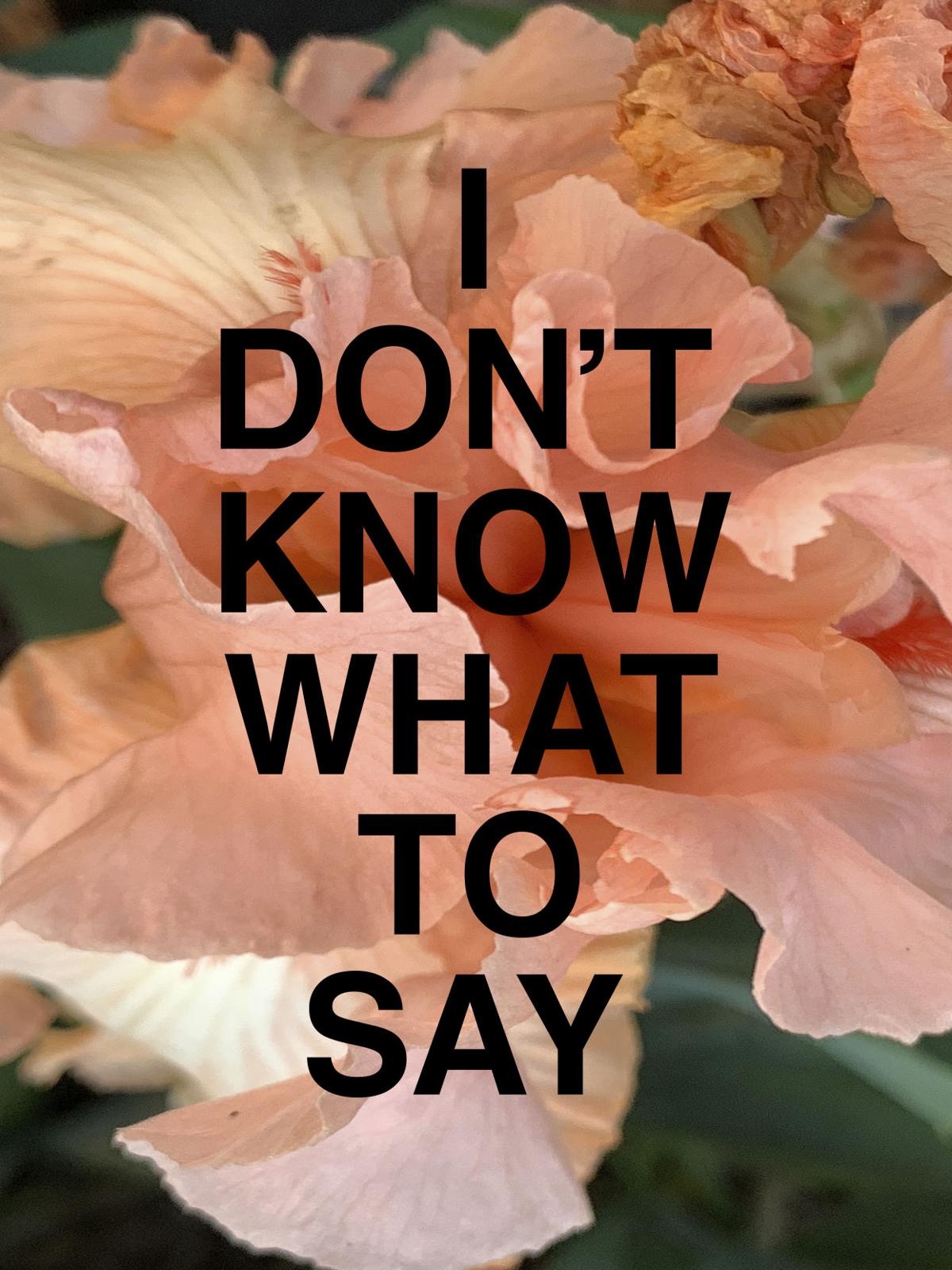 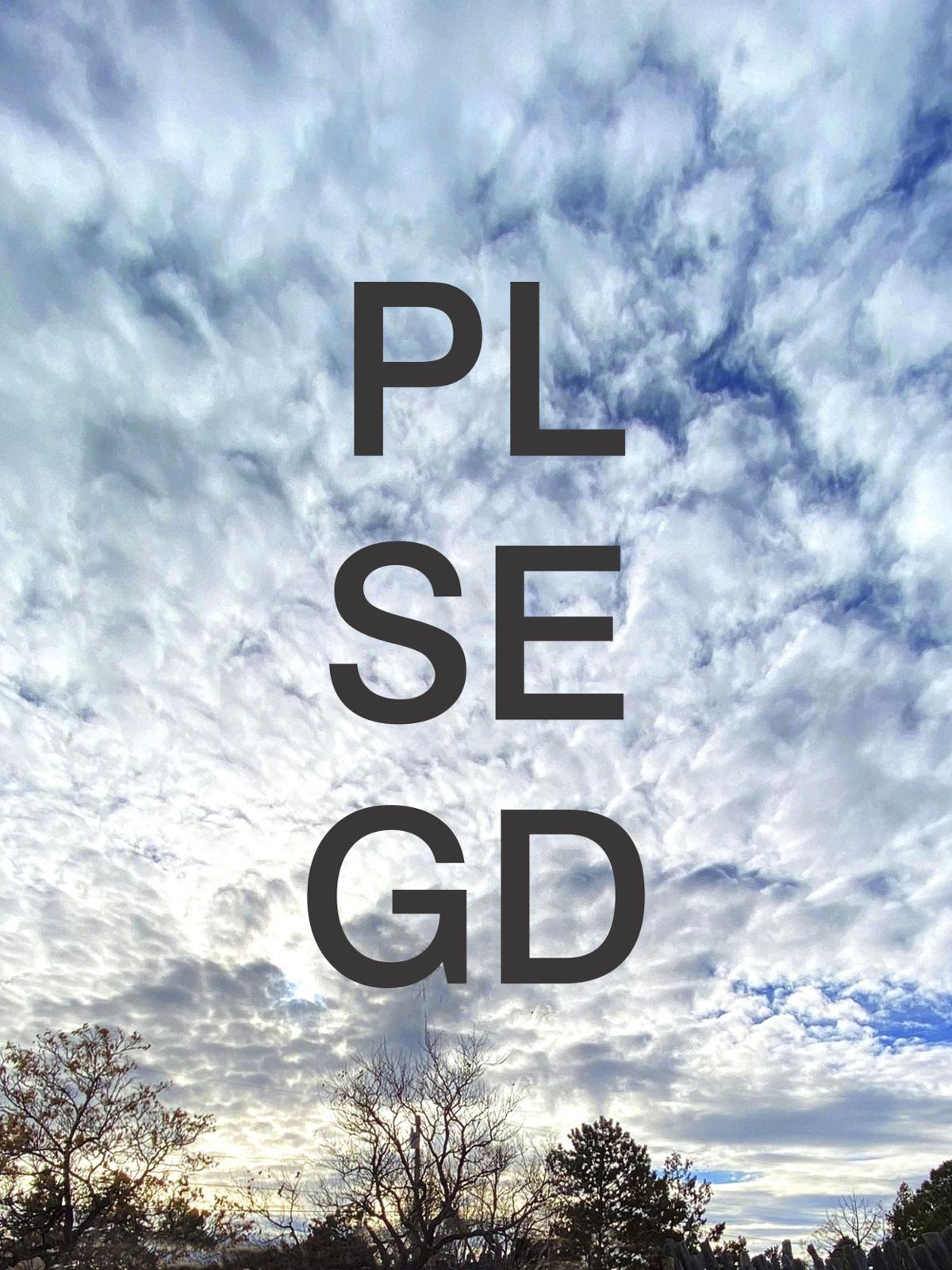 Look to the left or right while driving along Old Santa Fe Trail this month and the image of a black and leafless tree silhouetted against a blood-red sky, emblazoned with the words “not now,” will greet you. Is it a sunset? Is it suggesting something more ominous like the end times? Are the words a plea to forestall some nameless doom? Nearby, hanging from the same residential adobe wall is a contrasting image. A crisp blue winter sky glimpsed through a stand of aspens, inscribed with the words “i sold myself short.” Perhaps this sentiment comes at a moment of clarity when you chance to find yourself gazing up through the trees at the vast expanse of sky, where the unadorned beauty of nature moves at its own unhurried pace, and you realize some essential truth.

Multimedia artist Lisa Freeman calls these images, each one three feet by four feet, visual statements. About a dozen of these works comprise her public art exhibition, One Thread Broke. In each composition, Freeman places the words over photographic images. They recall the work of conceptual artist Barbara Kruger. But, where Kruger often uses appropriated photography and pairs it with text, Freeman takes her own photographs. Kruger’s texts read like slogans and reflect themes of feminism and consumerism while Freeman’s are more intimate and subjective. The visual statements are not overtly political but do pertain to the politics of being an artist, particularly an artist normally dependent on representation. “Being dependent or independent of galleries, commercial venues, or museums is a very old conversation,” Freeman says. “I think it’s taken on new importance with the pandemic. Our world as we know it is falling apart, and I think we’ve got to step up and create a kind of artistic independence that doesn’t need second- or third-party support.”

Although there is no formal reception for One Thread Broke, she encourages drivers to park on side streets and visit the wall for the 5 p.m. soft opening Friday, June 19, while maintaining social distance.

Freeman, 74, had planned to exhibit the work at Vital Spaces, a show she envisioned as a site-specific installation. Then, the pandemic hit. “It was becoming really stressful to figure out a date and foresee what was going to happen,” she says. “Finally, I said this is crazy. I just want to get my work out there. I have this beautiful adobe wall in front of my property, and I’d like to have more control over it at this point.”

The exhibition runs through July 17. Placing the images along her own wall, facing the street, keeps it in the spirit of a public art display while it also remains close to home. That’s significant because the work is very personal, she says. A number of the images are black-and-white self-portraits, overlaid with statements like “please don’t call me” and “i cry when i say hello.” These are stark, sobering images that, combined with the text, suggest a person seeking to find herself or to at least understand herself at a critical juncture of her life. The visual statements arose out of Freeman’s long recovery from head trauma that resulted from a 2016 mugging in Mexico.

“My recovery from that was one of the hardest periods of my life because my brain felt unhooked,” she says. “I felt like I couldn’t think in a straight line, and I couldn’t talk in a straight line. I had a serious conversation with myself about nine months to a year after it happened and said, What am I going to do? I can’t live like this.

“I decided that my life was art and that the only way I was going to get through this was to continue doing my art.”

She spent the past year and a half working on the project. The self-portraits were, in part, a response to the questions she was asking herself, she says, like, “Who am I?” “Where am I?” and “How did I get to be as old as I am?”

Freeman, who obtained her BFA in sculpture from the University of Chicago, always wanted to go back to school for a master’s degree. But it was important for her in the years following the incident in Mexico to remain connected to her home and studio in Santa Fe while doing so. She enrolled in a low-residency program through Sierra Nevada University in Lake Tahoe, Nevada, where she’s now an MFA candidate. “I could live at home and still be focused a hundred percent on my artwork. I guess it provided me the structure to dive back in again.”

Freeman is primarily known for her sculpture, which includes bronze work and assemblages made with natural materials gathered on outdoor excursions. There’s a paired-down aspect to these pieces. In her assemblage, she takes rocks, bones, and the roots and limbs of trees and paints them black, calling attention to the elemental beauty of their natural forms. Her visual statements also possess a simple directness. And in the current political climate, particularly during the coronavirus pandemic, they’re sure to have some resonance beyond a personal level. The statements are brief, free from a specific context, but they’re open-ended, giving the viewer an inroad. And they’re sure to have some resonance beyond the personal.

“Some of the words relate to the process of where I was at the point I made them,” she says. “But I think they’re also very politically apt for what’s going on now. It dovetails into our national, political, and pandemic trauma.”

Artists have suffered the consequences of canceled exhibitions during the pandemic. But other ways of getting work seen that are more visceral and impactful than viewing art online remain. We have not seen a significant rise in public art displays in the city in recent months. But with One Thread Broke, perhaps we’ll begin to see more. “I see this as an opening for Santa Fe artists,” she says. “Let’s go. Let’s get our work out there any way we can.” ◀

At the adobe wall at 847 Old Santa Fe Trail

I'm a night owl so typically I'm reading the morning paper around now (close to midnight). Ironically I decided to take a drive today and just happened upon these images on the wall - and here they are in Pasatiempo. I had to go up the street a ways to turn around and go back to see these amazing works. Go see, people. Wow.