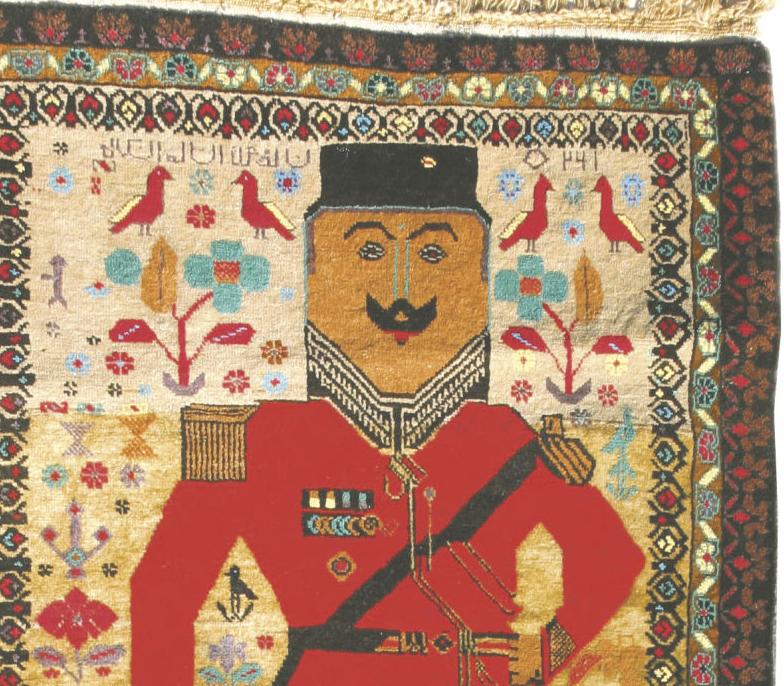 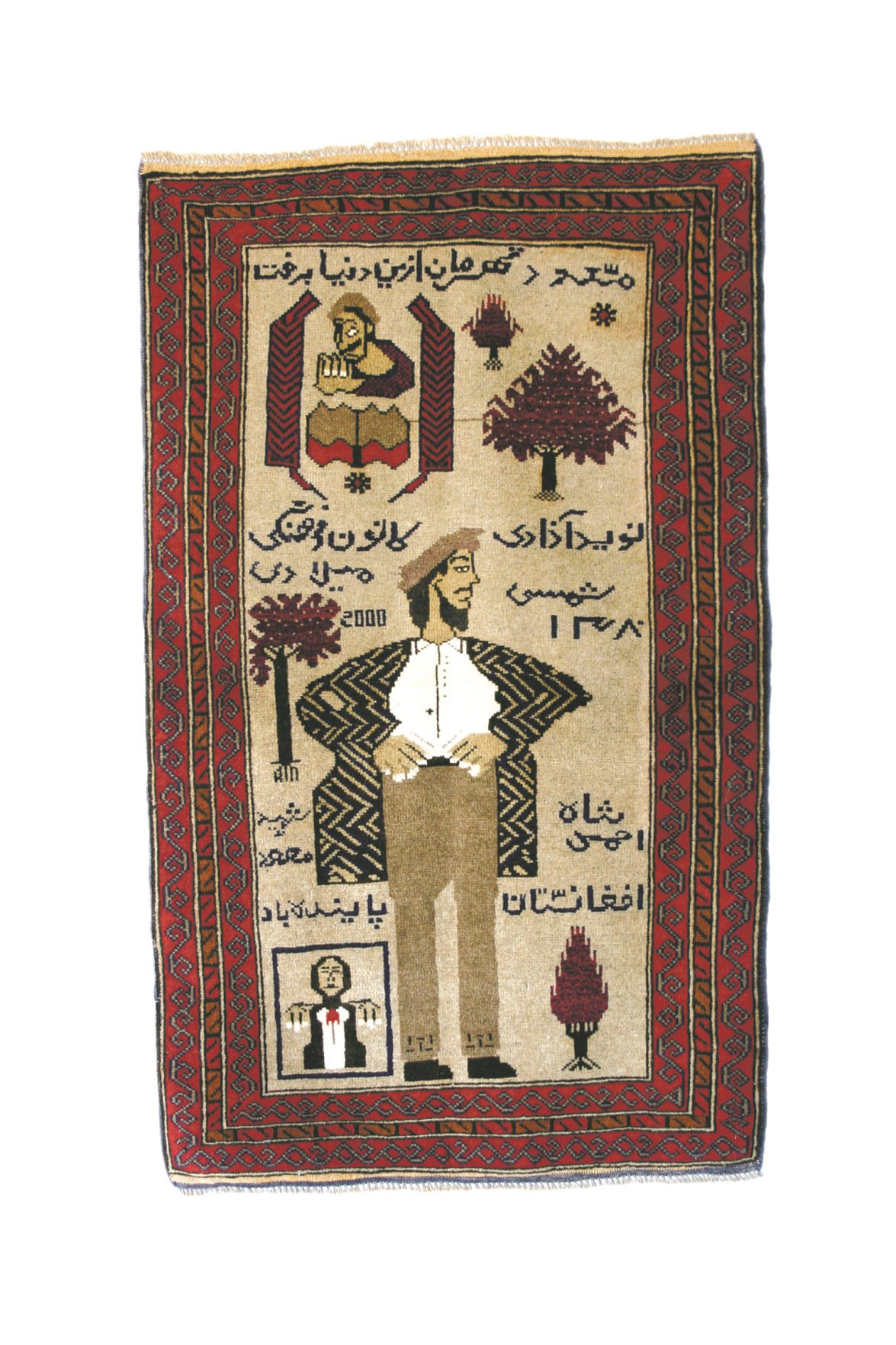 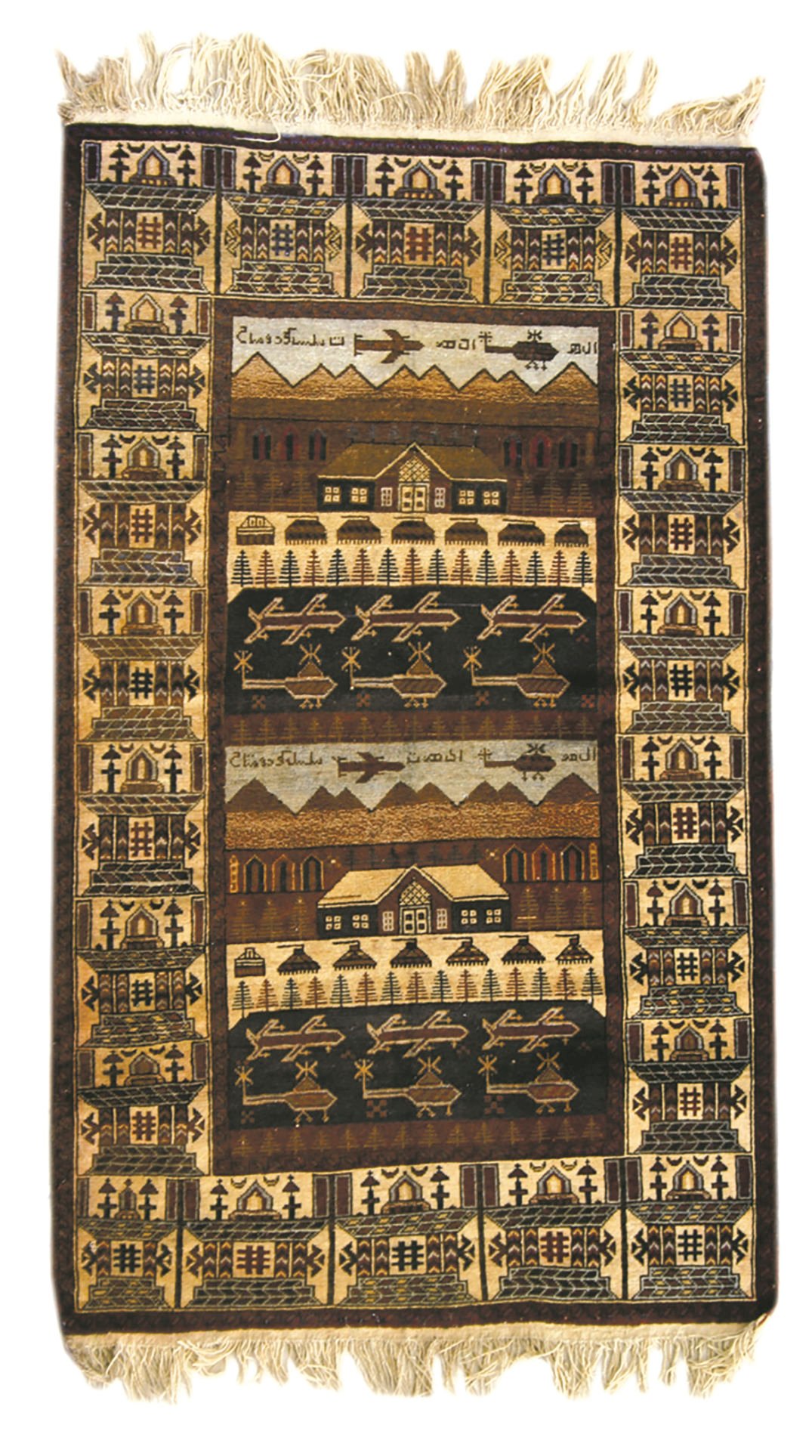 An Afghan rugmaker wove a design of maroon and green military tanks while in a refugee camp in Pakistan. The tanks drive across a wheat-colored field, flanked by Kalashnikovs — better known in the United States as AK-47 assault rifles. Red and blue airplanes fly with purpose along the border. The rug, whose maker’s name is unknown, was acquired by a collector in Peshawar in 1998, and now it’s included in a traveling exhibit, From Combat to Carpet: The Art of Afghan War Rugs.

The exhibit originated at the Villa Terrace Decorative Arts Museum in Milwaukee and was curated by Annemarie Sawkins and Enrico Mascelloni. In a recent article in El Palacio magazine, Sawkins writes that a long history of traders and invaders inspired some Afghan rugmakers to add weapons and technology to traditional rug designs, which became known as “war rugs.” This aesthetic impulse was coupled with a boom in the international market for Afghan rugs that emerged in the 1960s. The first war rugs were seen in the early 1970s, during a period of civil unrest and revolution. They became more common after the Soviet invasion of Afghanistan in 1979.

“Artists and artisans are cognizant of the market for their wares; they created art reflecting their complicated political zeitgeist and important geographical location, and consumers and collectors responded enthusiastically,” Sawkins writes.

In the 1980s, the United States was involved in supporting anti-Soviet forces in the region. After the Soviets withdrew in 1989, civil war continued, and in the 1990s, the Taliban took over. Throughout all of this, Afghan tribal communities experienced great instability and refugee crises. When looking for ways to survive financially, rugmaking — always crucial to Afghanistan’s economy — became a viable option for a growing number of people, says Carrie Hertz, curator of textiles and dress at the Museum of International Folk Art, where From Combat to Carpet opens on Sunday, Jan. 12.

Hertz says that war rugs are an example of contemporary folk art, a documentation of what has become a common story in the 20th and 21st centuries as artisans channel violence, warfare, natural disaster, and displacement into their work. She says that it’s difficult to know precisely what inspires the designs of individual rugmakers — whether they are driven by a need to record history, tell stories, or simply to make a living. “Some people may have been processing trauma. Some people may have been thinking, ‘I have to survive and I know how to weave these patterns.’ I don’t think there is a single answer.”

About 40 rugs and carpets are included in the Santa Fe exhibit, most of which are from the traveling show, though a few are from MOIFA’s permanent collection. All the rugs are handmade from wool and cotton using a pile weaving technique of asymmetrical knots. Weavers string a loom with warp threads, around which they tie knots and then run a weft thread, resulting in a densely packed textile, Hertz explains. “Those loose, knotted threads all get cut around the same length, and that’s what creates your pile — that shaggy appearance.” A denser pile is needed to render complex, curving lines; images on rugs with less-dense pile can have a pixelated appearance. The rugs in From Combat to Carpet have an average of about 80 to 100 knots per square inch.

Political portraits, cityscapes, and mountain ranges are common motifs, as are world maps and maps of the Middle East. “Geographic maps are particularly telling,” Sawkins writes. “Like a Western mapmaker, Afghan weavers place their country front and center, and many speak to a heightened sense of the geopolitical importance of Afghanistan.”

Border designs can be specific to ethnic minority groups such as the Kurds or the Baloch people. Across the board, the colors of war rugs vary greatly. They can be subdued or vibrant, ranging from deep blue to hot pink. Some of the most popular war rugs are made by the Turkmens (or Turkomans) in northern Afghanistan or in refugee camps, usually in various shades of red. Some war rug designs are adapted from traditional patterns, many of which are symmetrical and geometric, with motifs that include elephants, goats, curvilinear flowers, and paisley shapes. Weavers have adapted traditional design elements to suit new needs. For instance, paisleys are transformed into helicopters.

Prior to the invasion by Soviet forces, many Afghan weavers would not have seen such vehicles or equipment up close, says Rem Yildirim, owner of Arrediamo Santa Fe, a rug store on Galisteo Street. He has been in the rug business since 1986 — first in Turkey, where he is from, and then in Italy and the United States. He opened Arrediamo in 2000 and has sold a few war rugs to collectors and veterans. He currently has one in the store that is festooned with brightly colored tanks, guns, and grenades. Although it is handmade and of very fine quality, it isn’t an original war rug, he says.

Yildirim distinguishes between what he calls original war rugs — which were made in the 1970s and early 1980s — and reproductions, which are being made today. Reproductions are still handmade, and the designs may be unique to the weaver, but by “original,” Yildirim means the first impulse to create such imagery. While he agrees with the museum curators’ assertion that most of the war rugs now in existence were made in response to the international market for them, he says the first crop of war rugs (maybe 50 or 100 in all) were more akin to diaries kept by the teenage girls who made them.

Far from textiles created explicitly to appeal to American military personnel and collectors, he says, the first war rugs were highly personal. They reflected fear of and preoccupation with what these girls were seeing around them.

“They have secrets in the rug, like the initials of the boy they like, or colors, or something that reflects from her soul to the carpet. Anything she cannot express, she can put in the carpet. Most of the girls have lost some relatives to war. War was the main topic of conversation in their lives. My perspective? I think it’s kind of sad to have something of this emotional impact from teenagers.”

After 9/11, a new crop of war rugs emerged that memorialized the terrorist attacks on the United States. Two of these rugs are included in From Combat to Carpet. (Hertz says they will be displayed in a way that allows sensitive viewers to avoid them.) One of the 9/11 rugs comes from MOIFA’s permanent collection and shows an airplane crashing into one of the Twin Towers, as well as imagery of bombs, an aircraft carrier, the U.S. flag, the Afghan flag, and a dove of peace. “To me, this signals not a glorification of what’s happening but a hope for reconciliation,” Hertz says.

If much of the design of 9/11-themed war rugs resembles the sort of Xeroxed imagery one might find in a propaganda leaflet, that’s because the U.S. military air-dropped piles of such leaflets in Afghanistan, Hertz says. “A lot of people want to know how the weavers knew what planes hitting the Twin Towers looked like. Well, it’s because of the imagery we gave them.” Many 9/11 rugs feature lettering, such as “USA,” and phrases about fighting a war on terror and the goodness of American troops. Sometimes they contain misspellings, as most of the weavers are not fluent in English and merely copied the writing as design elements. Such “typos” can make the rugs more valuable to collectors, who Hertz says sometimes see folk art like Afghan war rugs as “naively pure, or not made by professionally trained artists, despite the fact that to weave a rug takes an incredible amount of training, skill, and time.”

Aside from collectors, war rugs are especially popular with military personnel, who buy them as souvenirs of their time in the Middle East. Perhaps these rugs are made to pander to the sentiments (and wallets) of U.S. soldiers, or maybe, Hertz says, the weavers really felt that these soldiers were bringing stability to their town.

“I always worry about these situations where there can be a lot of tension, where the viewer might not have a lot of knowledge of where the maker is coming from, and might have to rely on limited information or stereotypes,” she says. “I feel like it’s good to come from a place of compassion.” ◀

From Combat to Carpet: The Art of Afghan War Rugs

War rugs are an example of extremely contemporary folk art, a documentation of what has become a common story in the 20th and 21st centuries as artisans respond to violence, warfare, natural disaster, and displacement in creative ways.