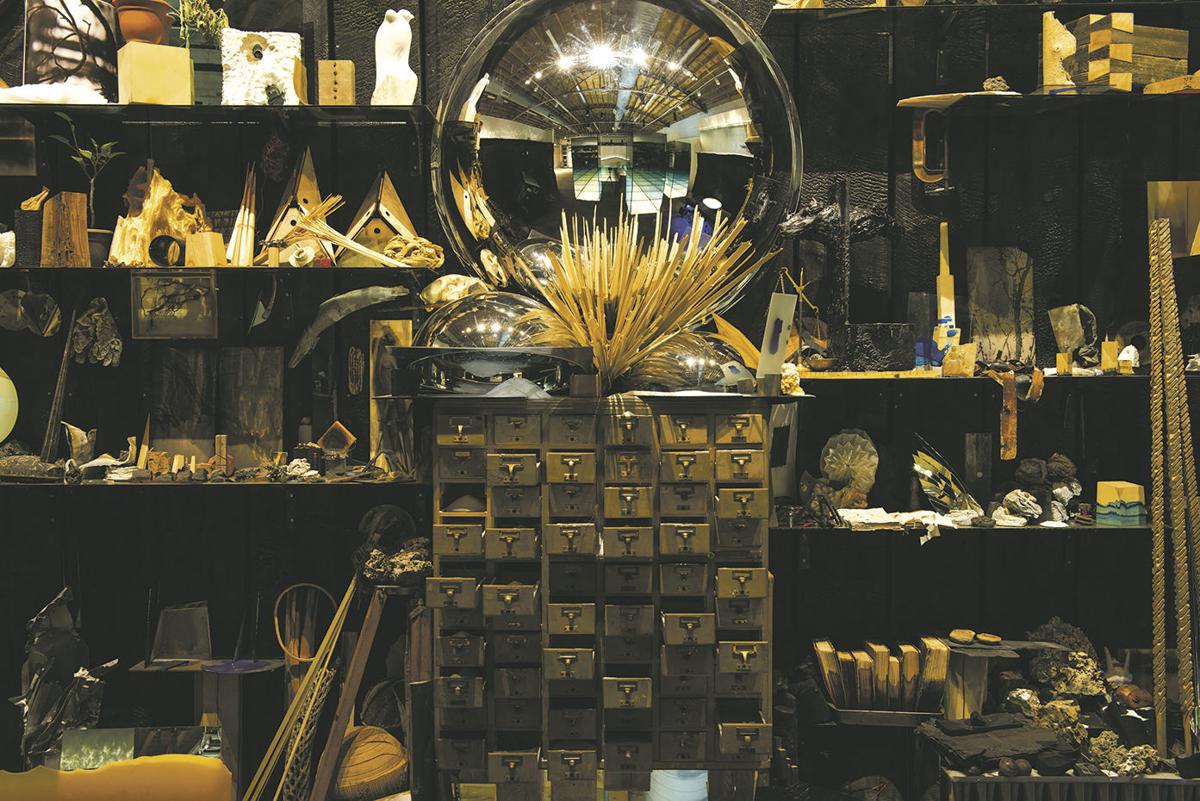 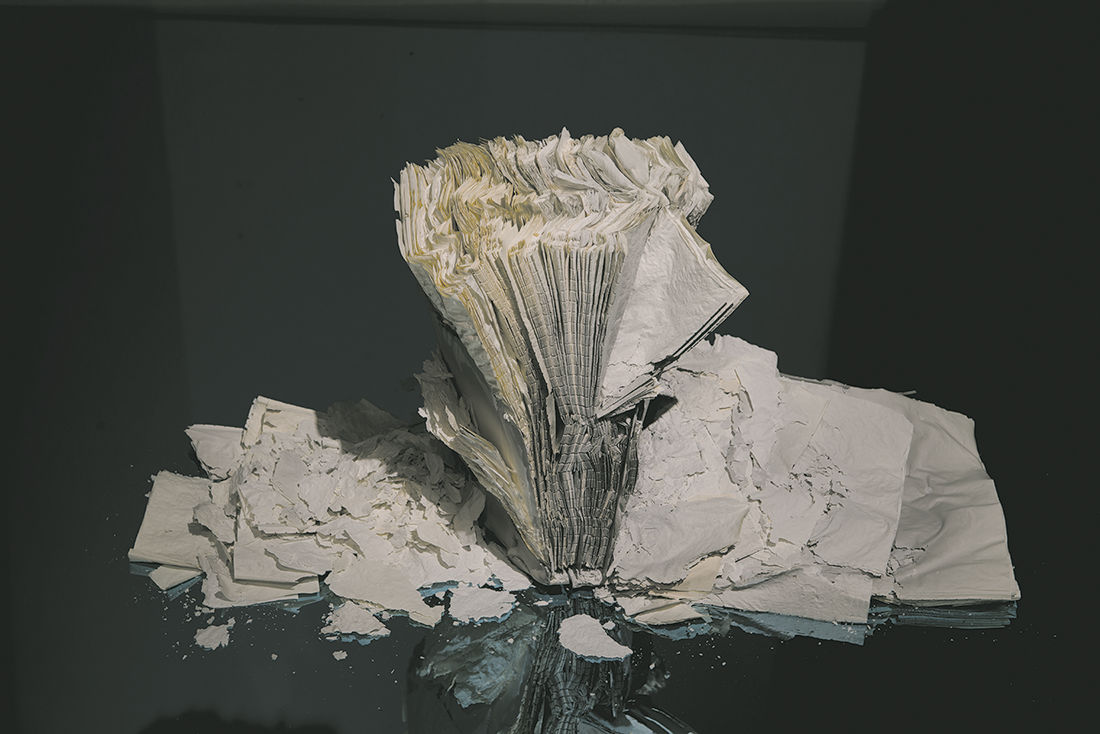 Perspective in art typically refers to the illusion of three dimensions in a two-dimensional composition. In a sculptural work, or in an actual three-dimensional space, perspective is altered with only the slightest shift of one’s movement: a step to the left or right, or a step forward or backward.

In Scott Johnson: Fissure, a beguiling, immersive exhibition of more than 30 works by Colorado artist Scott Johnson, the viewers’ perspectives are challenged as they weave their way through. This involves some trickery on the part of the artist, but it isn’t a gimmick. For instance, six Infinity Rooms — rectangular chambers with walls of mirrored glass that encase bases made of cracked earth — are strategically placed in relation to each other, as well as to other artworks in the exhibit. Four of the Infinity Rooms are 10 × 4 × 4 feet and two are 4 × 4 × 8 feet. The mirrored surfaces inside reflect each other, giving the illusion of infinite space receding into darkness. But the chambers, which are illuminated by lights suspended directly overhead, are translucent. Through them, you can see other objects in the room or other patrons. Those objects and people become specters inside the Infinity Rooms. Outside of the Infinity Rooms, of course, artworks and visitors retain their actual presence in physical space. In a sense, they both are and are not. That’s no gimmick. That’s an intriguing statement on the nature of perceived reality, like the Hindu concept of maya, or the illusory appearance of the phenomenal world.

Johnson took the name Infinity Room from the Rocky Flats nuclear weapons plant (now decommissioned) near Denver, where rooms were so contaminated that Geiger counters couldn’t measure the level of radioactivity, so they were said to contain an infinite amount of radiation. Fortunately, prior knowledge of the contaminated site isn’t necessary to understand or appreciate Fissure.

A seventh Infinity Room, which is much smaller than the others at 2 by 2 by 6.67 feet, is among the first objects the viewer comes across when entering the short hall that leads into the exhibit. It’s like a teaser, inviting you into its seemingly limitless space. There’s a room off of this short hallway, which houses an installation called Lantern. Peer inside and see luminous wavelike forms reflected on the walls, like the lattice of light reflected by an indoor pool. But light on water isn’t causing these shimmering patterns on the walls. The floor of the room is made of a thin, metallic material (aluminum, perhaps), that bounces the light back.

Much of what the viewer encounters in Fissure is almost pedestrian in its execution. Anyone could easily replicate Lantern, just as anyone can face two mirrors toward each other and create a mirage. That simple parlor trick, used so effectively in the Infinity Rooms, is no secret. But Johnson exploits this phenomenon so that the viewer experiences multiple perspectives at the same time. Infinity Rooms reflect Infinity Rooms which, in turn, reflect the space around them. The exhibit is less about the objects themselves and more about how they’re perceived.

To the right of the smallest Infinity Room is another short hallway. A wall-mounted video monitor on one side of the hall shows an image of an open book lying flat on a reflective surface, its pages blowing in the wind. As the pages turn, the movement is mirrored on the surface on which the book rests. As you stare at it, the book and its mirror image begin to look less like a single, cohesive shape and more like an organic form moving by its own volition.

On a wall across from the video (called Passage), is a piece called Vertex, which is simply a concave, mirrored disc set into the wall. As you move past it, it appears to expand outward into physical space, like an orb of liquid mercury reaching into the room. It’s a very convincing holographic effect. Vertex might seem like little more than a feint, designed to dazzle but ultimately empty of purpose, but we’ll come back to it.

Around the corner from Vertex is The Long Slope of Silence, a glass shelving unit with five shelves that contain crumbling books, which Johnson burned beyond recognition. These books, in which snippets of faded text can still be seen, are fragile forms that look as though they were made from white clay. Somehow he managed to perfect a burning technique that gives them all a uniform cream-like color and a softly undulating, velvety surface. The mind wrestles with the fact that, as burned books, they represent a loss of knowledge, but as sculptural objects, they’re ghostly and sensuous. Here, Johnson finds a poetic sense of beauty in pure ruin.

In the largest section of the exhibit, where most of the Infinity Rooms are located, is a wall-mounted found-object display called Rail. A rusted section of railroad track bent into an S-curve, this piece casts luminous reflections on the wall around it, like a halo. On first take, it seems to possess a light of its own, but this nimbus, like the patterns on the wall in Lantern, is merely the effect of directed beams of light bouncing off the metal surface.

In many of the works on view in Fissure, such as Rail, light is an integral component. But light isn’t something you can hold in your hand, like a painter wields a brush. It’s not tangible or tactile. Its waves are invisible to the naked eye. We detect light’s presence by what it reveals in our surroundings. Still, Johnson uses it like a medium. In the multifaceted installation Cataract, for example, he uses it to give a pile of cracked and charred wood the appearance of glowing embers. This effect is achieved by shining a light source onto metallic red thread woven through the pile of wood. Cataract is like a cabinet of curiosities assembled from artifacts that, together, loosely resemble some kind of natural history collection. Most of the components of this treasury of oddities, however, are unrecognizable or serve an unknown purpose. At the center of the display is a wood card catalog, its drawers open and filled not with information but with sand.

At about eye level along the same wall as Cataract is a round, convex disc with what appears to be a miniature video of Passage somehow embedded inside of it. Or video is projected from an unseen source behind the viewer. The realization dawned on this reviewer that this is actually the other side of Vertex and the image in the convex dome is not a reflection but a view straight through the wall to where the video is mounted. Yet, by some property of Vertex’s optics, the video is rendered small. This object, no larger than a dinner plate, ties two rooms and two works together in a way that is dynamic and experiential. It causes you to question the nature of what you’re seeing and your ability to judge it correctly.

Overall, Fissure is remarkably free from meaning — or, at least, didacticism. This is a show that’s intended to be experienced and meant to engage one’s senses. It isn’t so much thought-provoking as mind-provoking, like a puzzle. The design of the exhibit is engagingly crafty but not complicated. Its components are ordinary. It draws on observable phenomena we experience in our lives daily, like the play of light on a surface. Yet Fissure is greater than the sum of its parts.