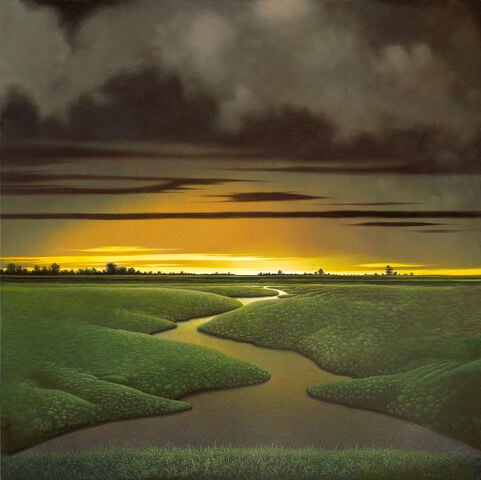 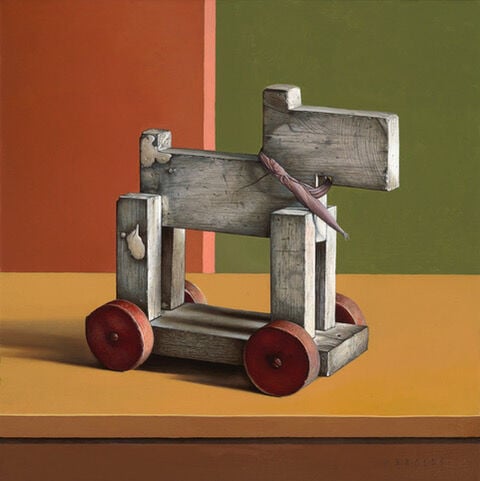 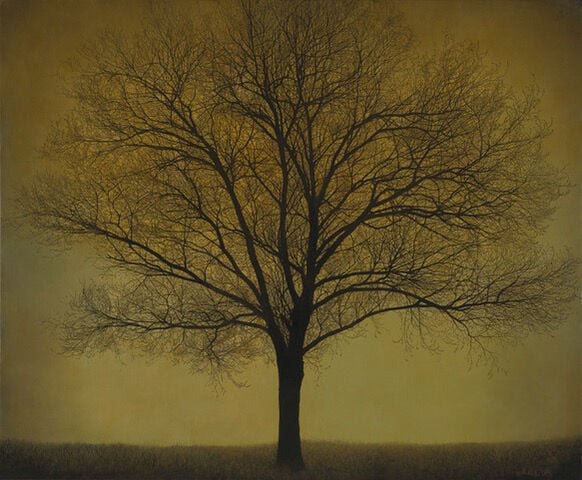 Currently on Braldt Bralds’ easel is a four-foot-tall oil painting of a chicken. It has gray-and-white feathers and a red comb and wattles. It looks askance at the viewer with a matter-of fact, slightly tense expression, as if the chicken has somewhere else it would rather be. It’s based on a real chicken that belongs to his nephew in Holland, but Bralds has given it the same sense of surrealism that he’s been cultivating since falling in love at age 12 with René Magritte.

He says the chicken has a long way to go, and up close you can see how some feathers are finely tufted while others still resemble bits of cotton fluff. From a distance, however, it looks perfect.

Bralds, 70, has always painted with an excruciating level of detail, honing his craft since the 1960s to become one of the most well-recognized illustrators in the world. But he’s been losing his vision for decades to an ironically named condition called Best Disease. Bralds’ central vision is all but gone. He can only see out of the corners of his eyes. To paint, he wears his thick eyeglasses, as well as a magnifying jewelers loupe, and looks to the sides of what’s in front of him. He’s able to focus on about one inch of canvas at a time.

Not only is he painting again, he is now represented by Nüart Gallery in Santa Fe, and he’s winning awards.

‘It’s much deeper than you think’

Bralds grew up in Holland. He moved to the United States in 1978, when he was 27 years old. His first day in New York City is the stuff of legend. He landed the cover of Time magazine within a few hours of accidentally calling a prominent agent who had, oddly enough, already heard of him. He’d been trying to get in touch with an illustrator he admired but landed a major job instead. For that cover, Bralds painted the author Mario Puzo during the height of the author’s success with The Godfather. He went on to illustrate covers for Rolling Stone, Playboy, Newsweek, and National Geographic. His clients have included Gucci, Nike, and Alfa Romeo. He painted stamps for the United Nations Postal Administration, and he won a Clio Award for Best Illustration of the Year in 1989.

He was 11 when he knew he had to be an artist, the moment he realized that Norman Rockwell’s paintings weren’t photographs. Soon after that, his teacher took his class to an art museum, where he showed them the Dutch masters from the 17th, 18th, and 19th centuries. Then they stopped in front of The Treachery of Images, Magritte’s 1929 painting of a pipe, under which is a sentence in French, “This is not a pipe.”

“The teacher said, ‘What do you think this means?’ I said, ‘It’s a pipe.’ He said, ‘No, it’s a painting of a pipe.’ That opened up a perspective for me. Because what is that about? It’s weird, but it’s much deeper than you think. I am giving you the image of a pipe, but it’s a painting. That spoke to me on a level that I didn’t understand then, but it gave root to the idea that I could paint anything and call it whatever I wanted. It freed me, even though I didn’t understand yet that it freed me.”

Bralds went to a technical arts high school and started his professional illustration career at 17. But he got fired from his first agency after about two years for submitting unsolicited drawings to his boss. He quickly found that he was better suited to a freelance life. One of his first jobs was illustrating the author James Baldwin for the cover of a magazine, working from a photograph.

“I changed the direction of his gaze, the way he was looking, and that made all the difference. It gave the viewer a way in,” he says.

Bralds is tall and slim, with thin gray hair pushed back from his forehead. He wears a purple-and-blue plaid shirt tucked into khakis, and a black-and-white checkered scarf around his neck. His small studio is in the corner of a sun-filled room at the home of fellow artist Carol Anthony, 78, also a former illustrator. They both turned to fine art when they moved to Santa Fe in the 1990s, although Bralds continued his commercial work as well.

Anthony’s house is artsy and rambling, with paintings and small sculptures cluttering every wall and surface. From a clothesline above a sitting area near the dining room hangs a row of cream-colored vintage ladies’ delicates — corsets, stockings, elbow-length gloves. Bralds’ corner contains his easel and a few tables, one of which is swallowed by an array of tiny paintbrushes and tubes of paint. He’s been using the space for about two years, since Anthony coaxed him back to his work.

He was diagnosed with Best Disease in the mid-1980s, after waking up one morning unable to read the titles of books on shelves across from his bed. There is currently no treatment for Best Disease, and Bralds was told his vision would continue to deteriorate. According to the Mayo Clinic and other sources, Best Disease is genetic, and Bralds’ father and sister both had eye problems. Bralds he says he didn’t inherit it. He found a doctor who stabilized his vision for some years with vitamins and supplements. She also told him he got the disease because of sun flares on the water during a vacation he took to the Caribbean a few months before he woke up with blurry vision.

“[She] said that there is so much reflection on the water, it hits the water and then it hits you, and the beams hit the water, and it doubles up,” Bralds says. “When it first started, I was out of work for seven weeks. She got me on all the vitamins, brought [my vision] back to a certain place. But I couldn’t draw a straight line. I had to work with an assistant to correct my drawings.”

He was able to work for decades using special glasses, but eventually they stopped working. He stopped painting entirely in 2014, when he decided that he was “fooling himself” that he could still paint to his own exacting standards. After giving up his illustration commissions, Bralds and his wife, Margaret, moved from a large house in Eldorado to an 850-square-foot apartment in town. He had no place to work even if he wanted to. He tried some drawing, but he’d lost faith in his skills. He told Anthony he wasn’t sure if he could ever paint again. She invited him to set up his easel at her place, and she moved her studio into her bedroom.

“I work small,” she says. “Value to me is not in largeness, but Braldt values large.”

The friendship between the painters began in Connecticut more than 40 years ago. She knew he needed creative camaraderie and a challenge. After he moved his things in, she handed him an artichoke and told him to get to work. He put on his jeweler’s headband and focused to the best of his ability. It took weeks, but he rendered the spiky green luminosity he was hoping for.

Anthony says they work quietly most of the day. “And then we meet at 4 p.m. at least once a week to drink wine and talk about politics, art, and philosophy — all the things that keep us becoming better people and going forward as humans.”

‘He has found his way back’

In 2021, Bralds not only found new gallery representation, he was inducted into the Society of Illustrators Hall of Fame, which he says usually only happens after you die. He also won second place in the 2021 Art2Life International Juried Art Exhibition.

He has figured out a system that accommodates the limits of his vision. He makes a somewhat detailed pencil sketch of the main image he wants to paint, and then a friend enlarges it and prints it onto canvas. Bralds builds the piece in layers, first in pencil and then in oil paint, refining detail as he goes. In his two years at Anthony’s, he’s finished seven paintings, including a nearly photorealistic image of an old wooden door (Behind Closed Doors, 2021) and an otherworldly river at sunset (Eventide, 2020). They range in size from 22 square inches to almost 4 feet by 4 feet. Five of them appeared in the 2021 Figurative Invitational at Nüart Gallery, curated by John O’Hern, Santa Fe editor for International Artist Publishing.

“I had known Braldt Bralds’ illustrations long before I met him here in Santa Fe about 10 years ago,” O’Hern says. “I knew he had stopped painting because of his Best Disease, and I was astounded when I saw his large landscape painting, Eventide, online — with a date of 2020. He had begun painting Eventide with large brush strokes and, as he progressed, slowly returned to his smaller brushes and the finely detailed, luminous surfaces that have always been typical of his paintings. He has found his way back, despite his visual handicap, to express himself again, painting with the mastery that never left him.”

Santa Fe is blessed to have great artists like Braldt Bralds in its midst, and equally fortunate to have an outstanding independent daily newspaper like the New Mexican and its world-class arts weekly, Pasatiempo, with gifted writers like Jennifer Levin to bring it all together. Bravo and brava!

The resilience of some individuals despite huge challenges is remarkable and awe inspiring. Thank you for this wonderful article.