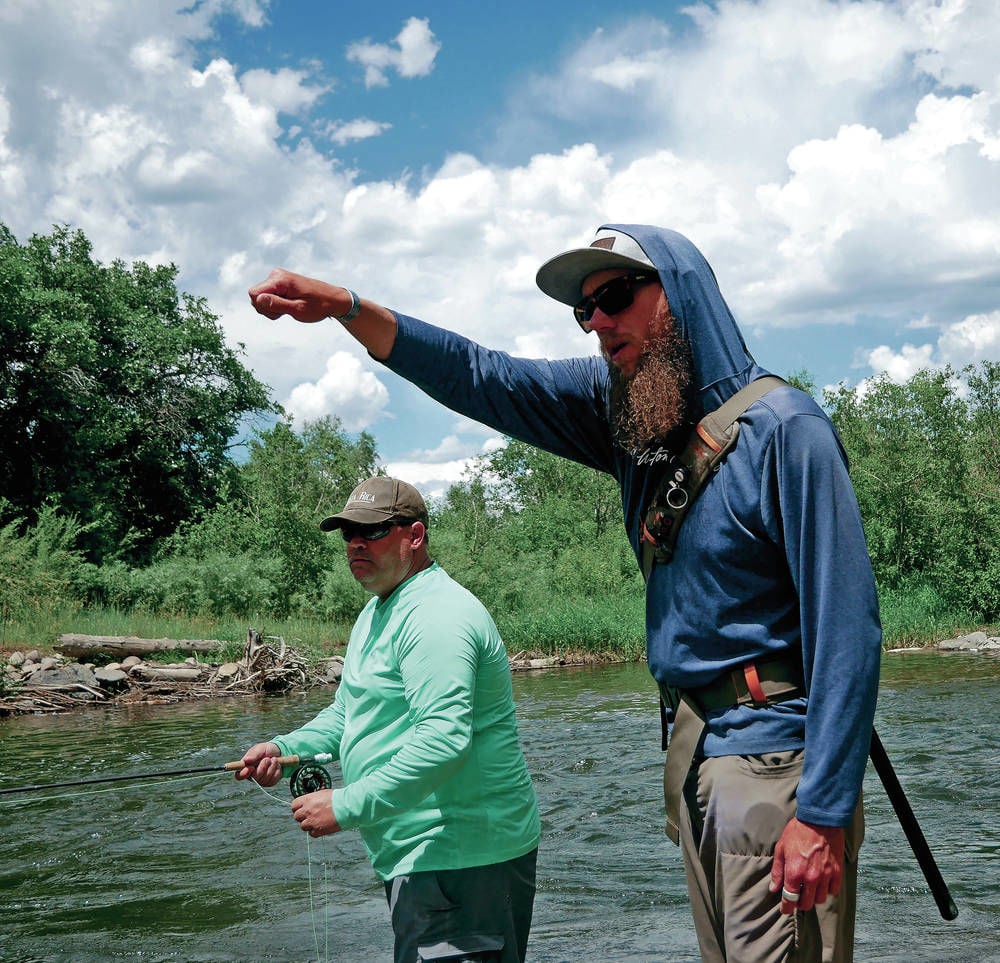 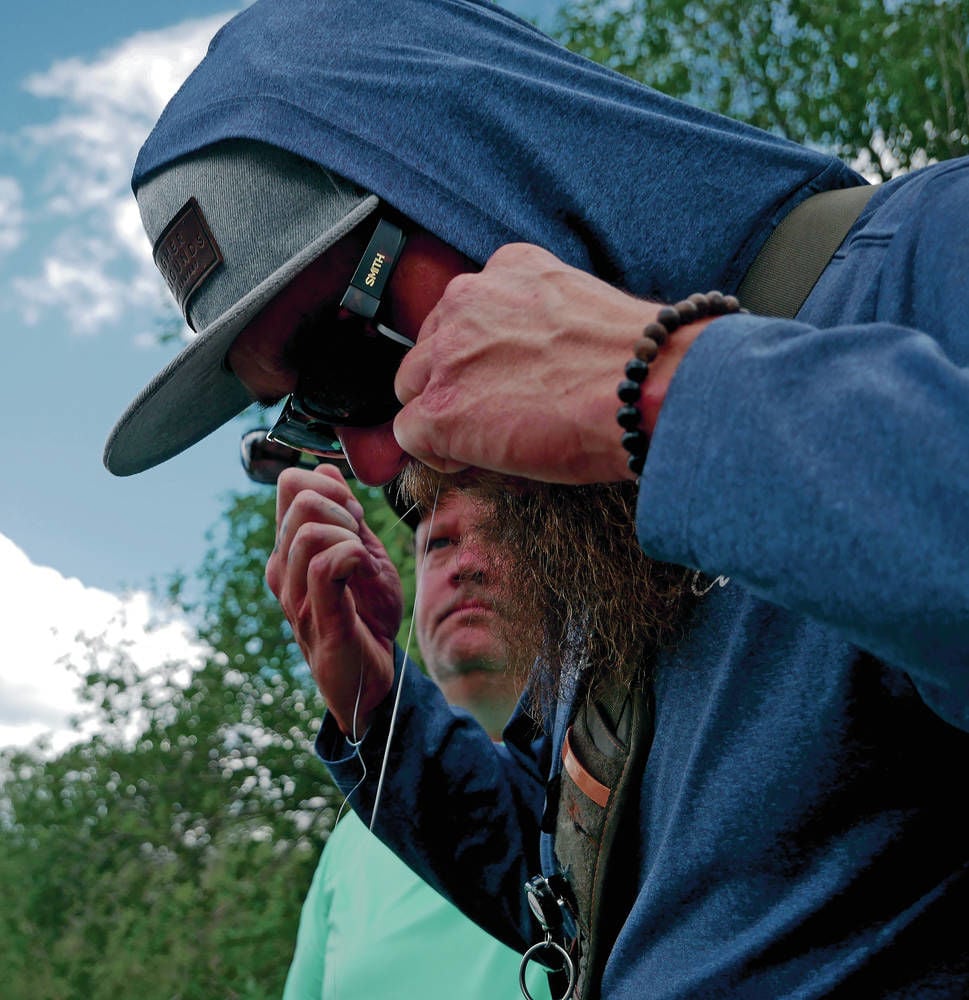 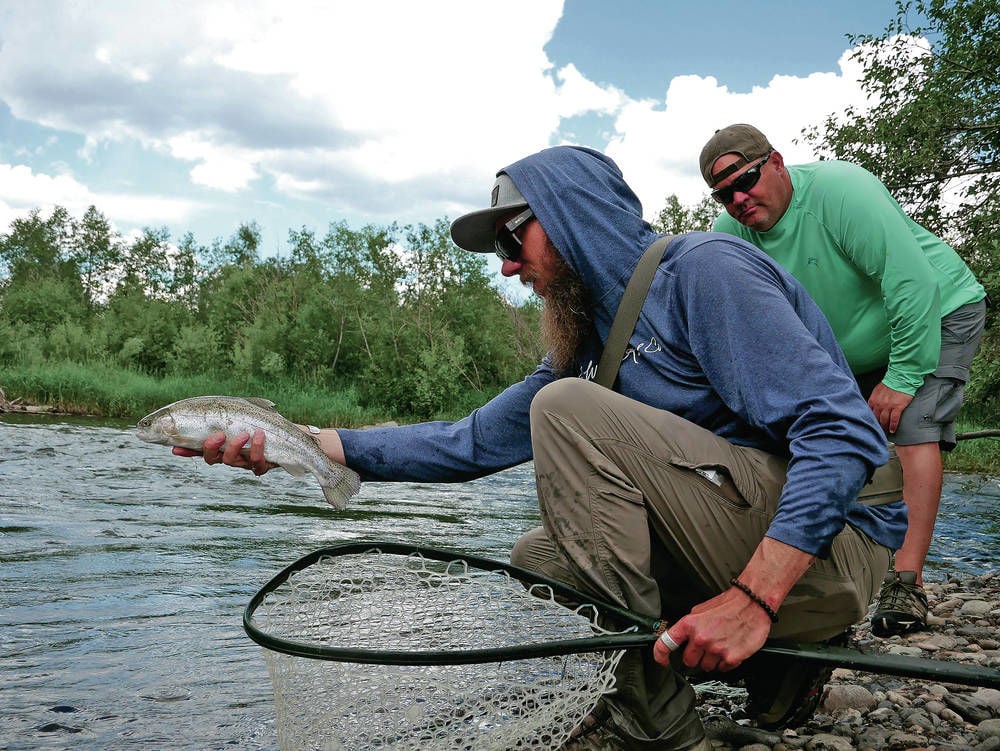 Dyer pulls a trout out of the Chama River Anderson looks on. Dyer is a former Marine who served in Afghanistan. ‘When I returned from the war, I was in bad shape,’ he said. 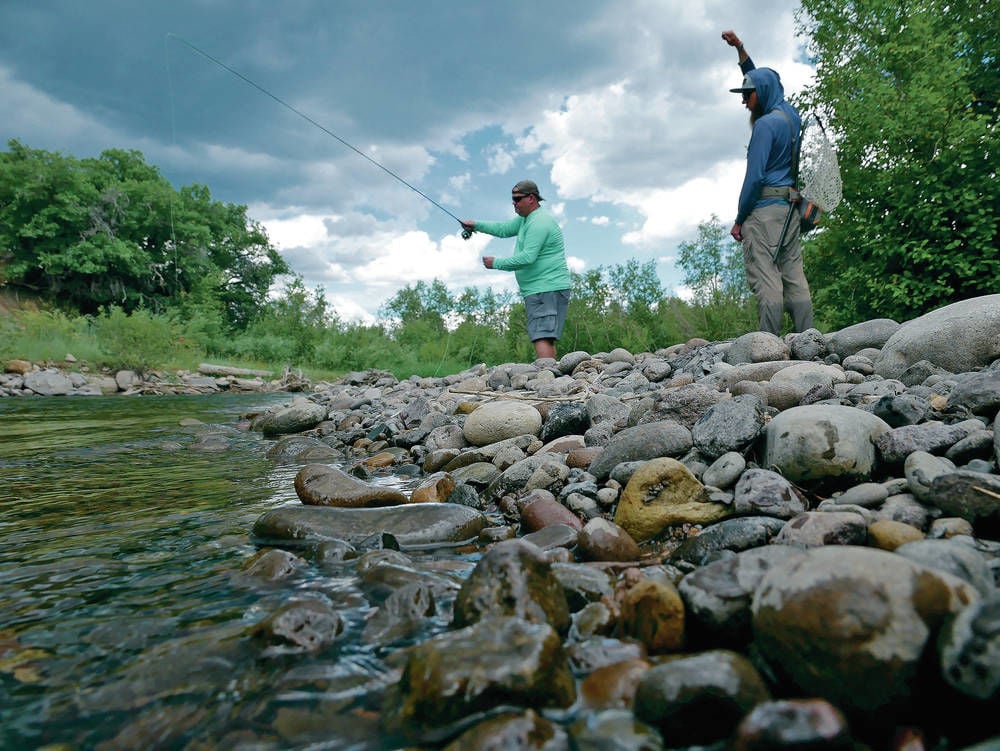 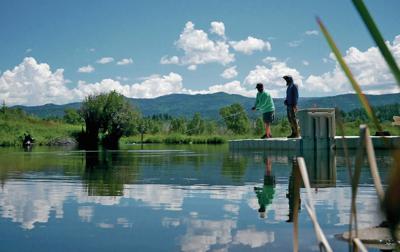 Wes Dyer sets his gaze on the far side of a riverbank where a collection of rocks lurch eerily out of the undulating current. He studies the flow of the water until he finds one spot that is sure to hide a 20-inch rainbow trout.

“There,” he says again self-assuredly as he points his index finger in the direction of his focus. “Let’s start there.”

Dyer, 32, a fly-fishing guide at the Reel Life in Santa Fe — replete with waders and boots, gear strapped to his back, plus a fly rod — marches forward into the watery abyss like the true soldier that he is.

His student for the day, 32-year-old Ryan Birdsell of Tuscaloosa, Ala., is a retired U.S. Marine on a two-day, all-expense-paid retreat. Birdsell follows closely behind.

Dyer also is a retired Marine, a former bomb dog handler and member of the 1st Combat Engineer Battalion. He was deployed to Afghanistan in 2009. The military gave him a purpose, a sense of camaraderie, that he missed after he retired.

And yet, being out on the water in pursuit of an unforgiving and at times elusive opponent makes him feel like he’s in his element. He often talks about his life before he began to fly-fish and after as two separate epochs in his personal history.

That total night-and-day transition led to a desire to help others find that path, too — especially returning military veterans.

“When I returned from the war, I was in bad shape,” Dyer said. “I was that hard-hearted man when I came back from combat.”

When Dyer arrived in New Mexico, he was working in the northern part of the state as a water utilities contractor. Then he thought he’d try his hand at guiding in Montana. He spent two years there before coming back to the Southwest.

Many returning vets, Dyer said, have a difficult time readjusting to civilian life after witnessing the destruction in a war-torn country. The Department of Veterans Affairs has programs to help, he agrees, but it could do more.

In the interim, Dyer founded a 501(c)(3) nonprofit organization, AWOL Angler, that aims to help veterans latch onto an activity that will help them reacclimate to society. Starting the organization was a way for him to give back after finding what could be called a godsend for him.

Since 2017, when he first put pen to paper, he has devoted his time and attention to get AWOL up and running. So far, the organization has secured some key sponsorships with local organizations, including the owner of the Reel Life, Ivan Valdez; the owners of Buffalo Thunder Resort; and the governor of Pojoaque Pueblo, Joseph Talachy. Southwest Airlines provides complimentary round-trip tickets to AWOL veteran guests. And the owners of the Trout Stalker Ranch in Chama open their guest ranch to Dyer and his students for lodging and, of course, fishing.

When the guests are in New Mexico, “they don’t open their wallets for anything,” Dyer said.

“We’re here to do anything we can for our vets,” Valdez said. “We wouldn’t be here if it weren’t for them, so the best thing we can do is make sure that we take care of them.”

AWOL handpicks veterans to participate in the program. They fly to Albuquerque, where Dyer gives them a lift to Santa Fe. There, they get fitted for boots and waders and are furnished with a rod and reel. Then they spend the night at Buffalo Thunder in Pojoaque. Next, they set out early in the morning for Chama, where the Trout Stalker Ranch welcomes them to their new home for a few days.

“Doctors are starting to prescribe nature as an alternative to traditional medicines,” said ranch co-owner Ashlyn Perry. “When you are fly-fishing, you are so focused that some of those worldly problems disappear. You’re able to forget them momentarily.”

Perry and her husband, Dan, grant Dyer and his guest unfettered access to the ranch’s mile-long stretch of the Chama River for one of the two days. On the second day, they explore other parts of the river.

“He’s very enthusiastic,” Perry said of Dyer. “He has this passion for helping other veterans. And I want to support our veterans, too. It makes me happy to see them so happy.”

“Wes is a rare breed,” Birdsell added. “And everyone at the ranch has the same enthusiasm, the same care in their hearts.”

So far, Dyer has taken two separate parties up to Trout Stalker, the first such trips since starting AWOL, but he’s hoping to expand the program to include more guests and perhaps even longer trips.

“I’d like to see this become nationwide,” he said.

People in the military say a soldier never leaves another soldier behind. Wes Dyer seems determined to do just that.