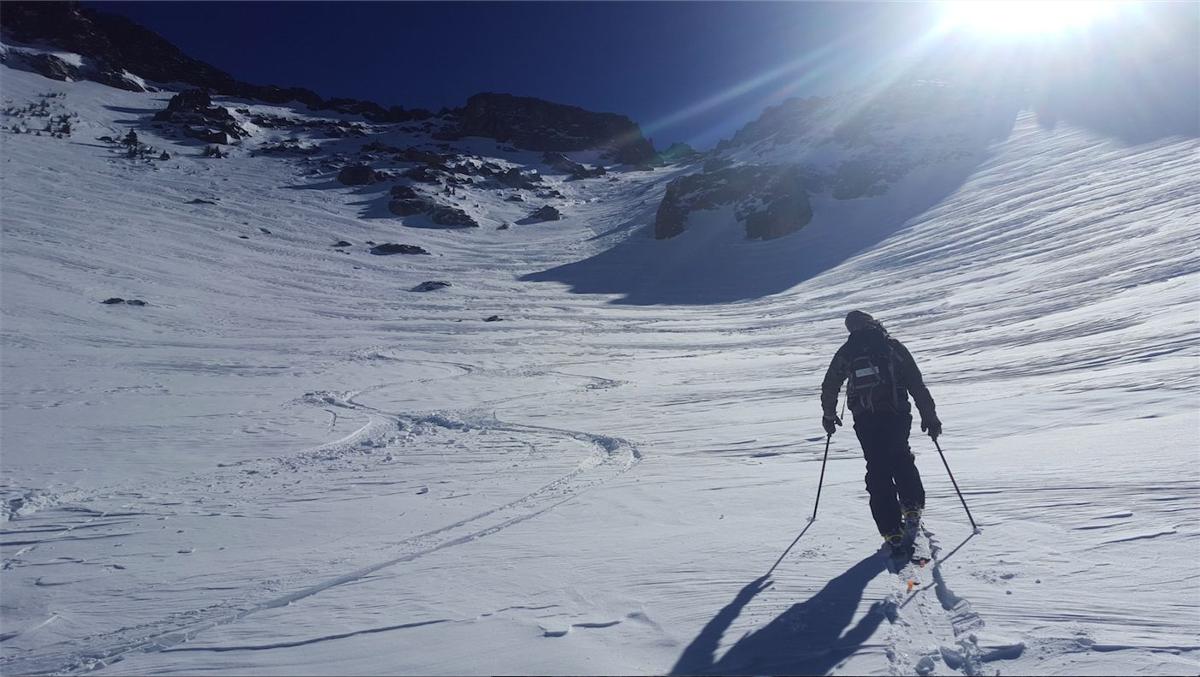 A skier in the backcountry around Santa Fe in 2016. Uphill skiing, also known as skinning, has become an alternative to traditional downhill skiing for winter enthusiasts in the Santa Fe area. 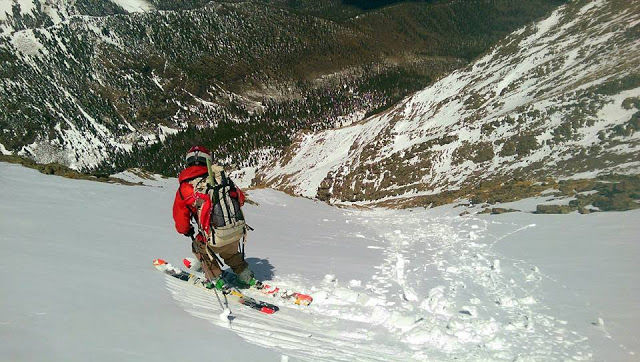 A skier heads down a slope in the Sangre de Cristo Mountains in Colorado in 2017. 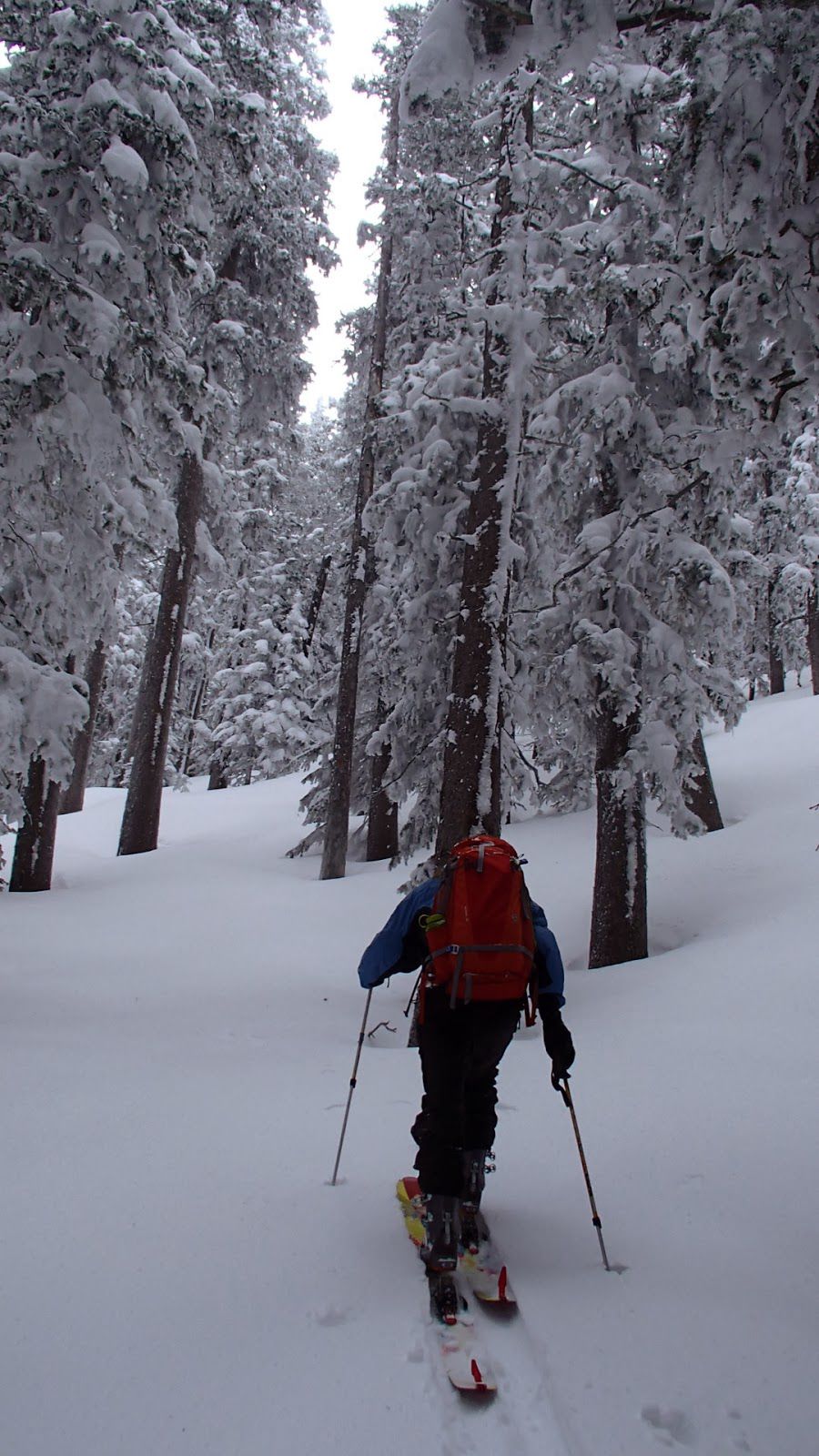 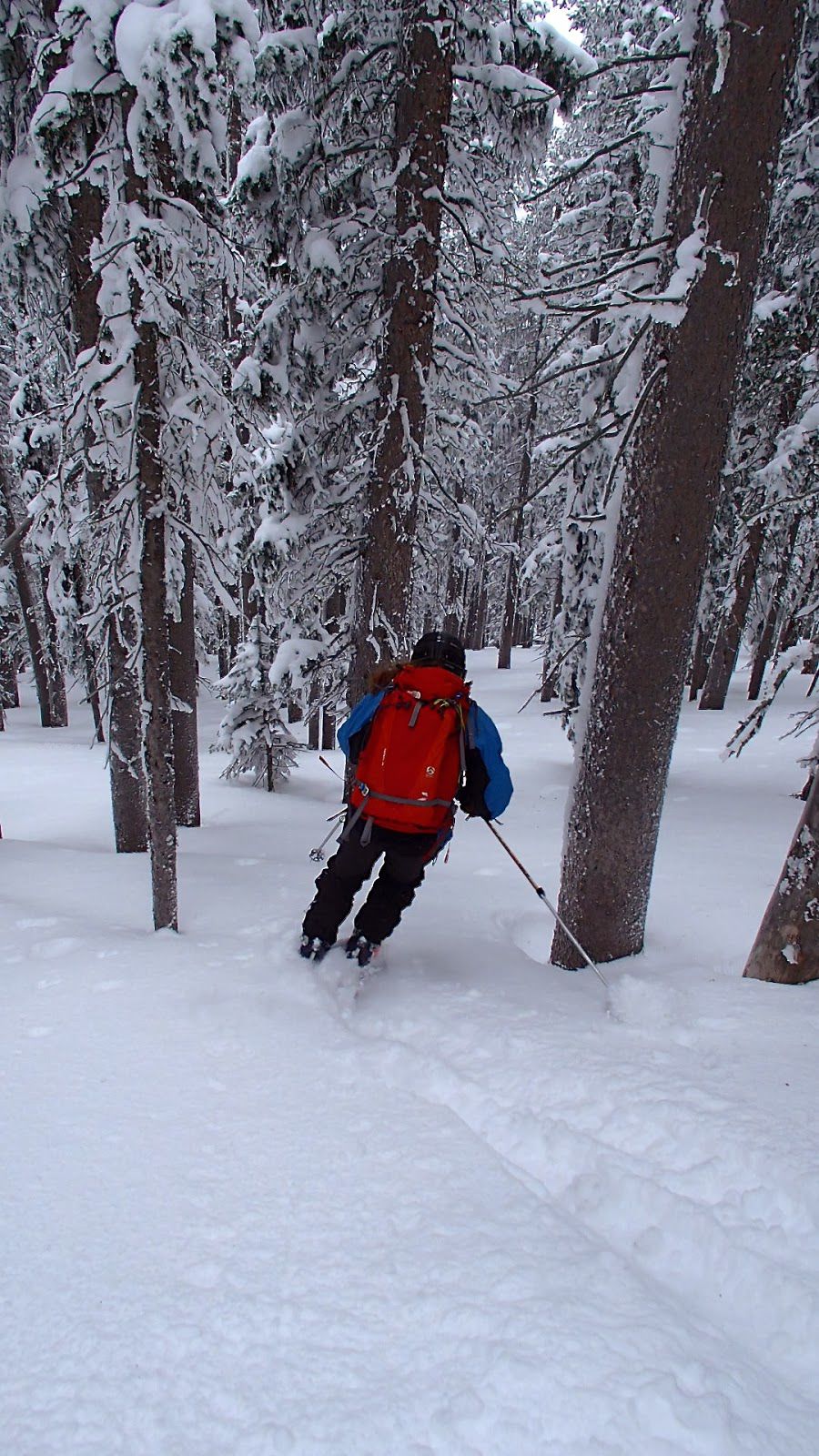 A skier in the backcountry around Santa Fe in 2016. Uphill skiing, also known as skinning, has become an alternative to traditional downhill skiing for winter enthusiasts in the Santa Fe area.

A skier heads down a slope in the Sangre de Cristo Mountains in Colorado in 2017.

It’s the middle of winter and the sun hasn’t risen yet. But Jacob Stock isn’t cold.

As he continues up the hill at Ski Santa Fe, armed with a headlamp and accompanied by his dog, the usually busy slopes are quiet except for the sound of his skis sliding on the snow and the heavy breathing of strenuous exercise.

Stock woke up at 5 a.m. to be at Ski Santa Fe. But he’s not downhill skiing, as the lifts won’t open for another few hours.

Also referred to as uphill skiing, skinning — named for the strips attached to the bottom of the skis that help them grip the snow — has become an alternative to traditional downhill skiing.

Stock said he’ll often go skinning midweek before work at Ski Santa Fe, which allows the activity. While he said it’s cold at first, the difficulty of moving up a steep trail on skis warms him quickly.

“It works a different set of muscle groups than downhill skiing, so it’s a pretty comprehensive workout — at least it feels that way,” Stock said. “My legs are usually tired, but it’s really amazing to get that adrenaline flowing.”

Stock said he usually goes to the top of the area before skiing down. The route typically takes him a couple of hours.

“Usually I barely make it to work in time,” he said.

Skinning appeals to him because it gets him moving during a season when it’s easy not to, Stock said.

“It’s a great way to stay in shape and get outside during the winter, which is sometimes hard to do,” he said.

Hayden said one reason for the increase last year could have been the large snowfall. But he said another explanation may be that people are attracted to the challenge of skinning.

“You can argue it’s more fulfilling when you get to the top than just riding a lift up,” he said.

Jack Dant, director of ski patrol at Ski Santa Fe, said while only a small percentage of people at the area skin, the number is increasing annually.

“It’s a fundamental part of the sport. … It’s something we enjoy doing and, managed well, it’s something that everyone can enjoy,” he said.

To prevent collisions with downhill skiers, Ski Santa Fe has an uphill responsibility code, which includes rules such as staying to the sides of trails and keeping dogs leashed. Dant said he’s not aware of any incidents between uphill and downhill skiers but added that the rules aren’t adhered to at times.

“Some people don’t follow our responsibility code, and it’s those individuals that risk ending the program for everyone,” he said.

Although skinning at the area is free, Dant said Ski Santa Fe may at some point consider implementing a nominal fee — much less than the cost of a lift ticket — for an uphill pass.

While Ski Santa Fe is a popular spot for skinning, some venture past the area’s boundaries into the surrounding backcountry.

Dan Shorb, who runs an adventure sports blog called Southwest Backcountry, has been skinning in New Mexico since he moved to the state in 2009. Shorb said one of his first skinning trips here was into Truchas Peak. He has since skinned in a variety of places, including the backcountry around Santa Fe.

Shorb said he likes skinning in the wilderness because it’s a way to continue adventuring in the winter.

“I get to explore areas that otherwise would be fairly rough hiking,” he said. “With skiing, you can skin up, ski down and get out quickly.”

To skin in the backcountry, as well as at a ski resort, Shorb said skiers need specialized equipment. This includes a free heel binding on their skis, which makes it easier to go up. The heel locks into the binding on the way down the mountain, Shorb said, letting skinners ski in the typical alpine style while descending. Also needed are skins — the mohair material that goes on the bottom of the ski when going uphill — and boots that fit into the free heel binding.

Shorb added that people typically swap out heavy downhill skis for a lighter pair when skinning.

However, he emphasized that even more important than equipment is knowledge of the backcountry and the risks involved.

Jeremy Cole, a backcountry skier and owner of the Santa Fe outdoor store Alpine Sports, said people going beyond the boundaries of resorts need a shovel, an avalanche probe, an avalanche transceiver and “the education to know what the hell you’re doing.”

Cole, whose store rents and sells skinning equipment, recommended that skinners take a safety course provided by the American Institute for Avalanche Research and Education. He added that skiers should travel in groups.

Despite the risks that come with the sport, Cole said the appeal of skinning is in the effort the sport demands and enjoyment that comes from being out in the wilderness.

“It’s never been about how many runs I can get in,” he said. “It’s always been about the quality of the experience rather than the quantity.”