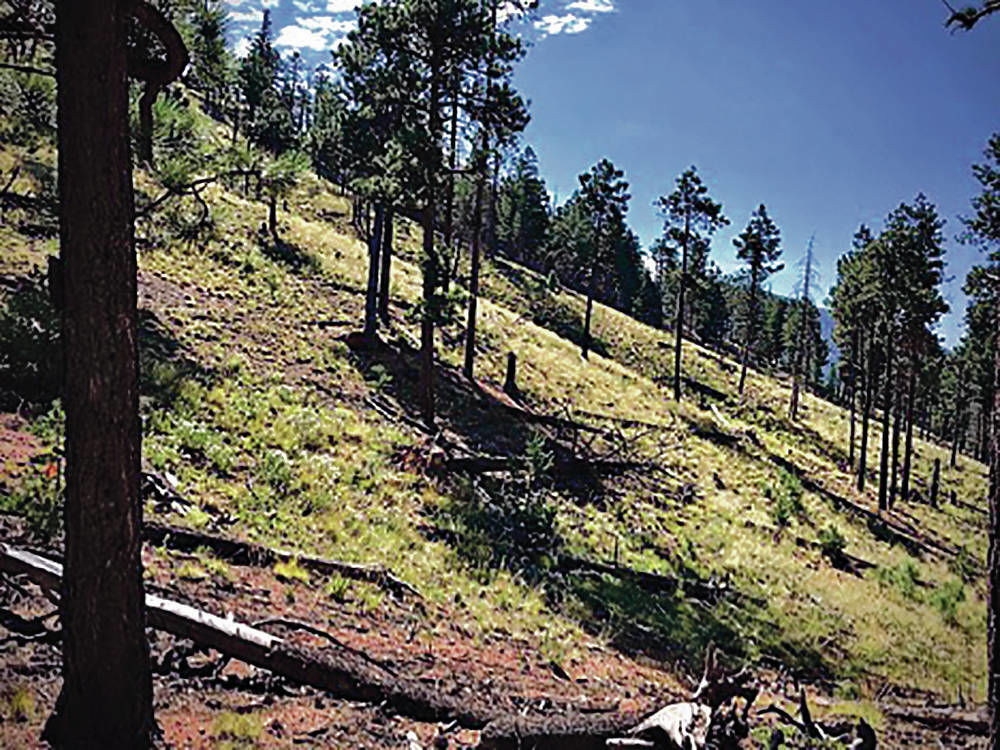 Santa Fe Municipal Watershed at Black Canyon thinned on steep slopes in early 2000s and burned twice by the Forest Service — critics of the project say this is no longer a functional pine-mixed conifer forest. Photo by Dominick A. DellaSala 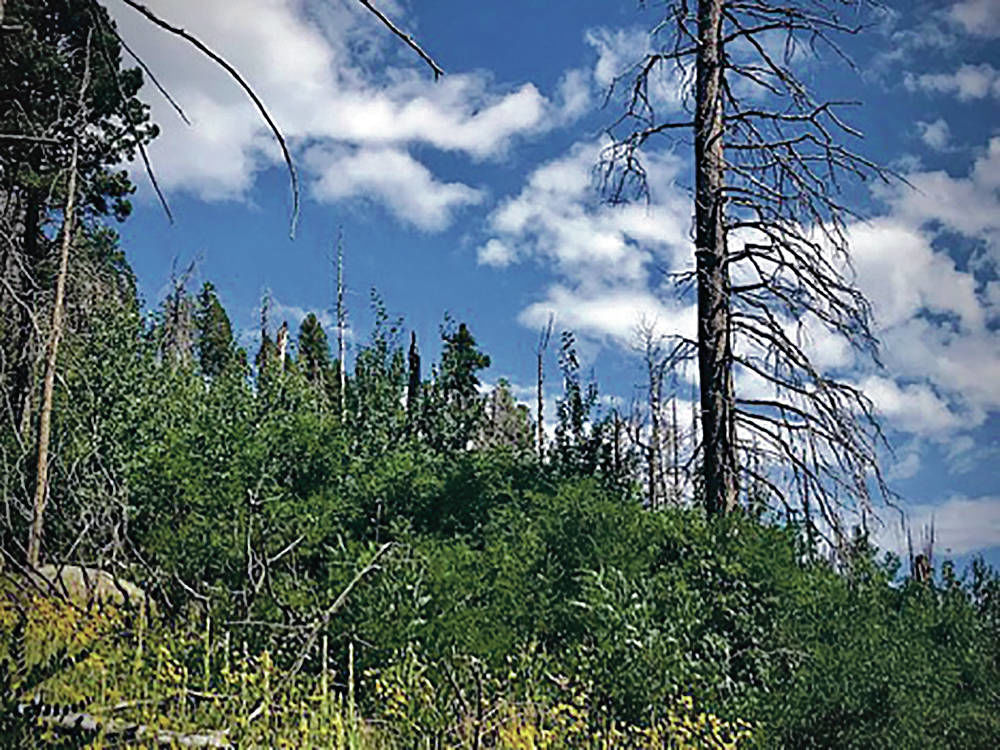 The ‘charcoal forest’ created by high intensity burns like this one outside Los Alamos is as biodiverse as an old-growth forest. Photo by Dominick A. DellaSala 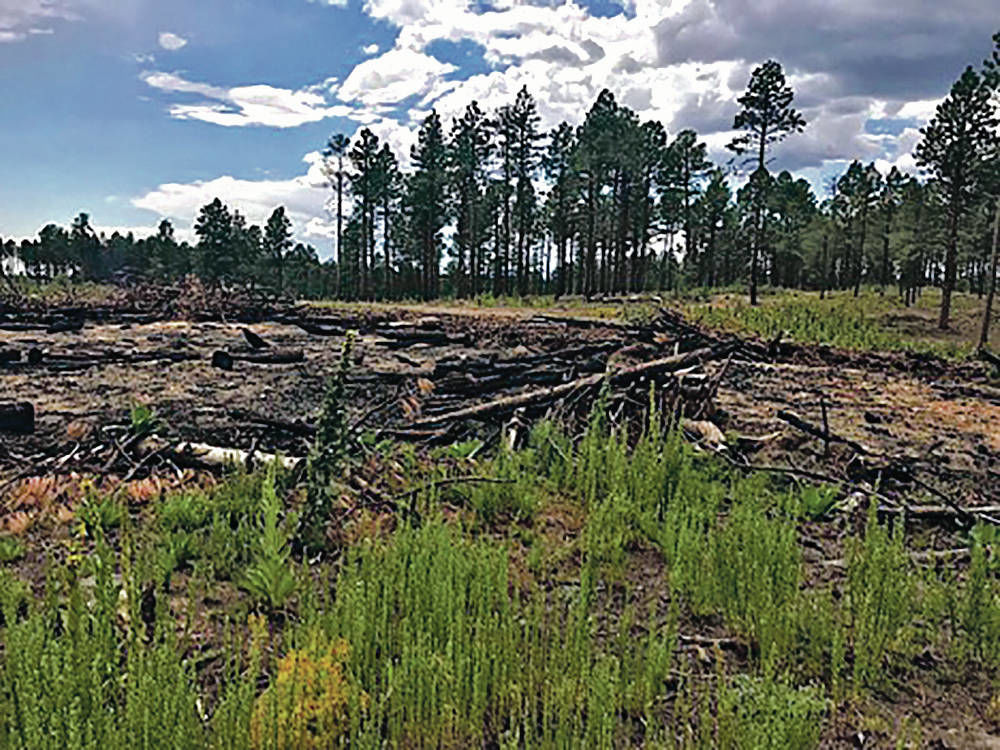 Santa Fe Municipal Watershed at Black Canyon thinned on steep slopes in early 2000s and burned twice by the Forest Service — critics of the project say this is no longer a functional pine-mixed conifer forest. Photo by Dominick A. DellaSala

The ‘charcoal forest’ created by high intensity burns like this one outside Los Alamos is as biodiverse as an old-growth forest. Photo by Dominick A. DellaSala

Santa Fe is blessed with magnificent national forests, wild rivers and some of the cleanest airsheds in the nation. Many people are here to be part of, connect with and heal through nature. It’s only natural that there is public outcry when forests are cut down or burned.

I was asked recently by local conservationists to take a hard look at the Santa Fe National Forest from the perspective of forest-fire ecology. I toured Santa Fe’s municipal watershed at Black Canyon and burned areas outside Los Alamos. I viewed forest “restoration” in the Jemez Mountains. What I witnessed was ill-informed tinkering with forest ecosystems that likely will continue for decades under the U.S. Forest Service’s new management plan currently in public review.

During my hike into the large burn patches, I experienced a remarkable fire-created charcoal forest jump-started by pollinating insects, seed-dispersing birds and a rejuvenated web of life as diverse as an old-growth forest. Nothing was wasted. Dead trees shaded new plants from intense sunlight, eventually decomposing as nutrients for fast-growing progeny. There is no end or beginning to this forest-fire cycle that I call “Nature’s Phoenix” except when interrupted by fire suppression and logging. I recommend safe coexistence with these fire-adapted forests that thrive when allowed to burn at various intensities.

Roadless areas free from logging and having fewer fire-suppression effects could provide managers with the blueprint for restoring forest integrity. Instead I found inappropriate “restoration” treatments in roadless forests.

In the municipal watershed at Black Canyon overly aggressive forest thinning and repeat prescribed burns converted the once-diverse forest into a degraded savanna that looks nothing like the blueprint. In one area, the Forest Service removed all but about 10 percent of the smallest trees, exposing the few remaining ones to blow down. The new forest plan would authorize such treatments over thousands of acres. Imagine leaving only about 20 spindly looking trees widely spaced across an area the size of a football field once populated by hundreds of wind-firm trees.

Other inappropriate treatments I observed were championed by the Southwest Jemez Mountains Landscape Collaborative that promoted “saving” a pine forest from a mistletoe infection by clearcutting infected trees and then some. The result was a weed-infested field where soil life was killed by intense pile burning and compaction from heavy machinery.

In both cases, a surgical touch is the more appropriate treatment. Such an approach would leave many more clumps of large and small trees to preserve more of the vital genetic coding for weathering climate disruptions. The Forest Service could also introduce “contour” felling of larger trees staked horizontally along steep slopes in the municipal watershed to reduce erosion into the reservoirs from periodic monsoons. “Girdling” (circular cut through the tree bark that kills the tree) of small trees in overly dense areas would help to improve wildlife habitat.

Another problem I see is the annual use of low-intensity burns to reduce fuels. These prescribed fires cannot create the diverse wildlife habitat produced by mixed-intensity, lightning-caused wildfires. The Forest Service must scale back burning and work with public health officials to provide hourly smoke monitoring needed to protect vulnerable populations including the young, elderly, asthmatics, chemically sensitive individuals, pregnant women and those with cardiovascular and lung disease. Managing lightning-caused fires for ecosystem benefits is preferred to frequent prescribed burns and may even produce less smoke cumulatively. Closing and obliterating roads would also limit human-caused fires as well as slow the spread of weeds and stop chronic sediment bleeding into streams.

An immediate need is helping residents living near wildlands make their homes firesafe. If done effectively, the vast majority of these homes could survive even large wildfires. This means homeowners must retrofit homes with fire-resistant materials, screen open vents and gutters, prune branches within 60 feet of the home, and install emergency sprinklers. Local officials also must adopt stricter building codes, create better fire-warning and evacuation infrastructures and provide assistance for low-income homeowners to become fire-wise.

Ending sprawl into fire-unsafe areas is another top priority because the majority of fuel treatments are ineffective at reducing risk. In a recent study, scientists determined that only 24,000 of the 7.3 million acres of thinned and prescribed fire-treated forests over a 20-year period across the West actually encountered a fire when “fuels” were lowest. That is, the odds of encountering a fire were less than 1 in 100 and are not improved appreciably by greatly increasing thinning.

The Forest Service is taking public comment through Nov. 7 on the Santa Fe National Forest Plan Revision that will serve as the forest management blueprint for decades to come.

To build trust, the agency must become accountable to the public it serves. This means admitting when “restoration” goes wrong and stopping use of misleading terms like “catastrophic” to describe diverse post-fire landscapes. It means leaving many more trees in place by being surgical instead of widespread with treatments, protecting roadless areas and listening to public concerns about the health effects of smoke and chemicals used to start and spread fires.

It’s time to use a more holistic medicine-like approach that responsibly treats the forest and people with the kind of respect and dignity the agency wishes to receive in return. I suggest you visit www.santafeforestcoalition.org to comments on the forest plan revision and participate in educational hikes and other activities.

Dominick A. DellaSala, Ph.D, is an award-winning scientist with more than 200 publications and books, including being co-editor of The Ecological Importance of Mixed-Severity Fires: Nature’s Phoenix.