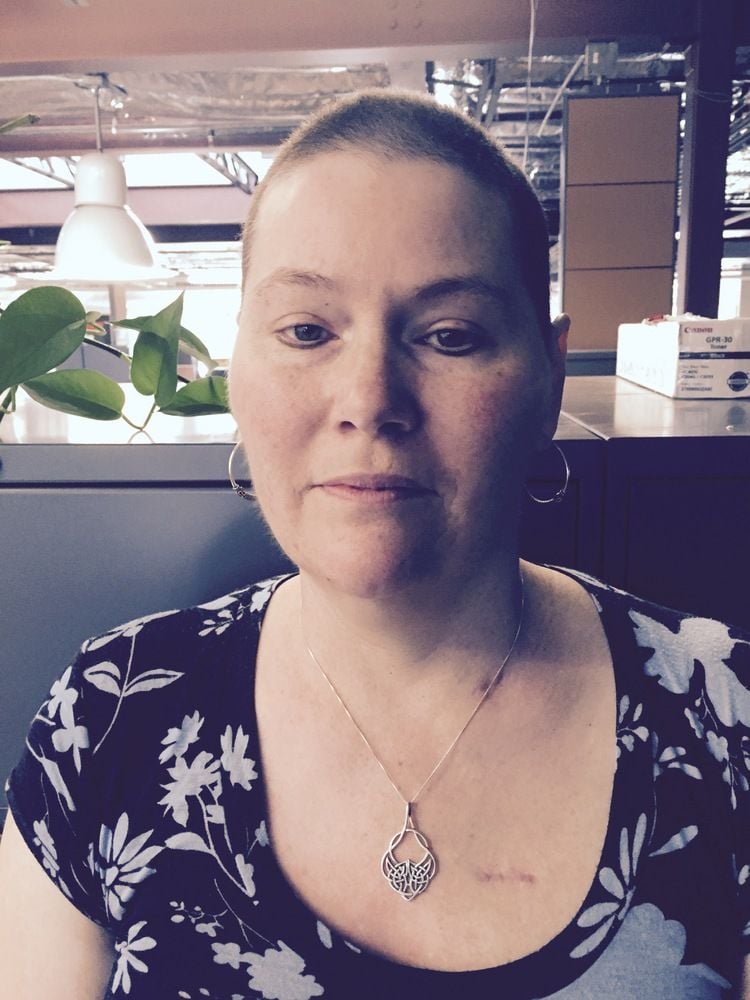 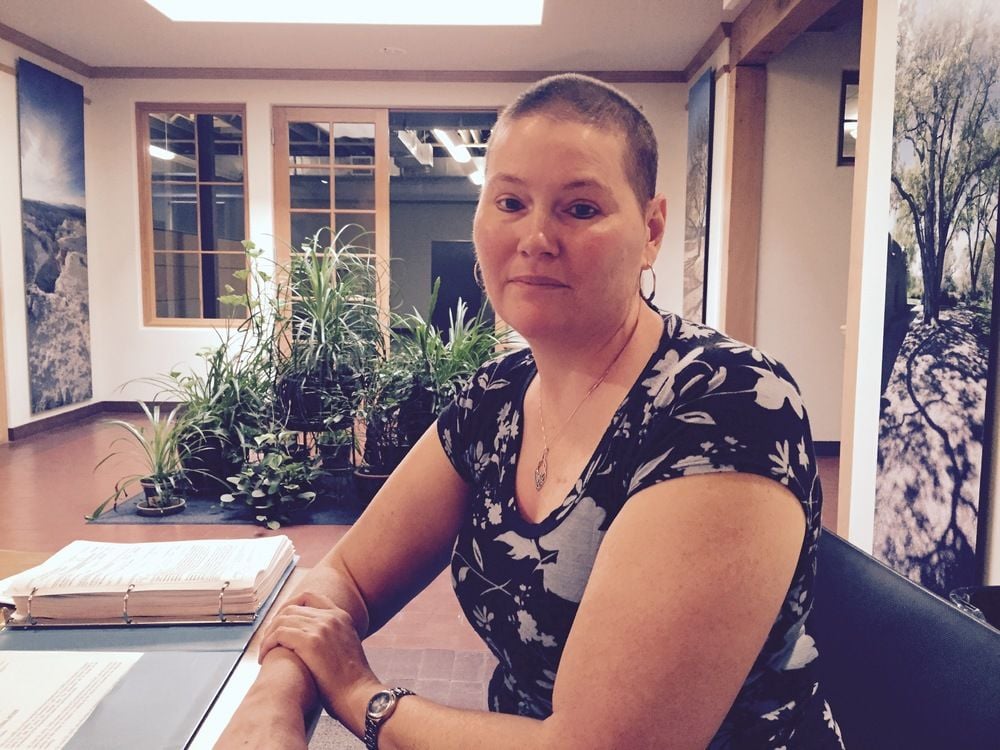 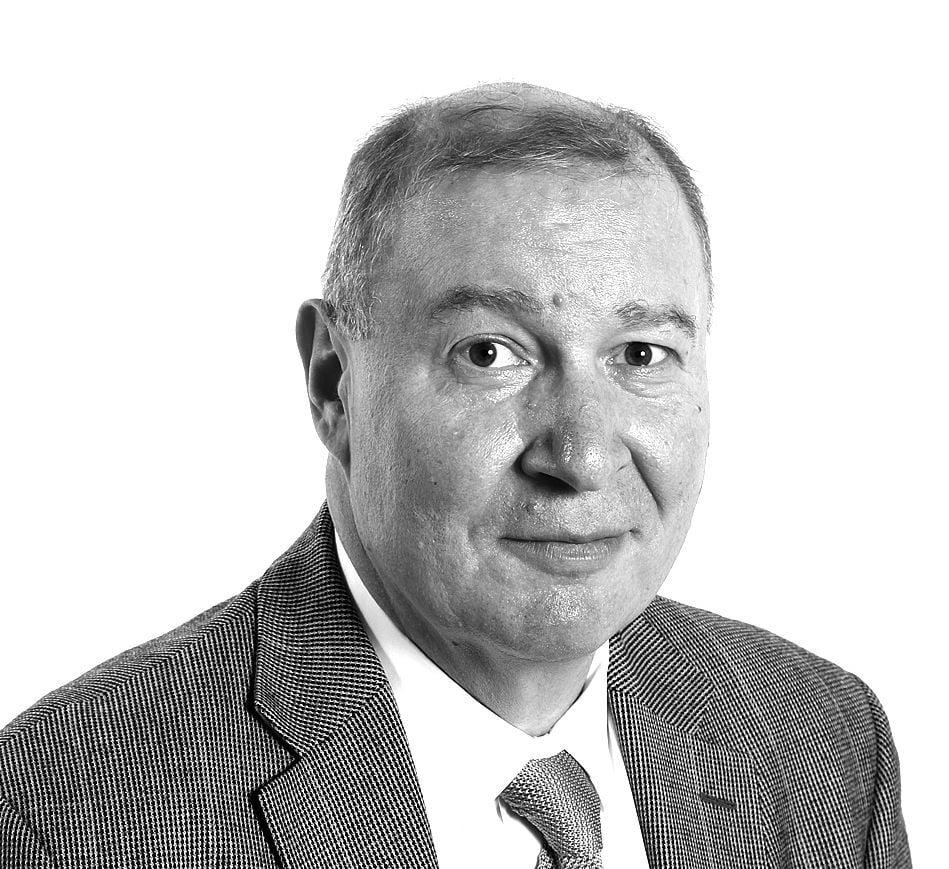 Radiation to destroy her breast cancer had burned her flesh, another setback for her as summer softened into Labor Day. Then came an email from her boss that made her convalescence more painful.

Ed Burckle, Cabinet secretary of the state General Services Department, informed Burke in the email that she was being fired from her $71,000-a-year job in the technology and computer systems bureau.

Burke, a 41-year-old single mother, found the stated reason for her firing to be peculiar.

“They have never asked me if I could work,” she said in an interview. “They’re supposed to ascertain that information, but they didn’t even try.”

She says she can still do her job with breast cancer, and is ready to return to work, at least on a part-time basis.

Breast cancer is more than a disease to Burke. She says it’s the excuse her bosses have used to take away her livelihood.

Burke has worked in the General Services Department since January 2013. She claims she became a whistleblower about wrongdoing in the computer bureau starting in 2014, before her cancer.

Now she alleges that Burckle and his managers have retaliated against her for pinpointing misconduct, first by disciplining her on petty charges, then by firing her.

Burke says the workplace was so poisonous that, after she was diagnosed with cancer, Human Resources Director Angela Dawson ordered her in an email to clock out and subtract time from her personal leave when she talked by phone to her doctor.

“Nobody else has to do that for personal calls,” Burke said.

Estevan Lujan, a spokesman for the General Services Department, discounted Burke’s claims. “Those assertions aren’t true,” Lujan said in an email. “Obviously we can’t get into the details; state law prohibits disclosing confidential personnel information. But employment actions taken on this employee were not retaliation.”

Burckle’s email telling Burke she would be fired was dated Aug. 31. It said: “The General Services Department is contemplating dismissing without prejudice you from your position as of September 1.” The Cabinet secretary’s tangled syntax meant Burke’s termination would take effect in less than 24 hours.

In a six-page letter, he went on to say that Burke had exhausted her annual leave and family medical leave. She maintains she still has short-term disability leave available. She also says Burckle violated the federal law protecting people with disabilities by firing her.

Burke has had numerous confrontations with her supervisors, beginning more than a year ago. She admits to making a mistake in computer security by failing to safeguard a password. Her bosses finally decided this July, while she was being treated for cancer, that she would be suspended for 30 days for professional misconduct in the breach of security.

But Burke says it took her bosses 40 days to change the computer password that she had left unprotected, demonstrating that her mistake was benign. The Communication Workers of America has filed a grievance on her behalf, saying Burckle’s managers missed the contractual deadline for investigating and disciplining her. She still has not served the suspension, and the dispute over the penalty would be moot if her firing stands.

Burke’s supervisors have alleged that she committed other violations, including insubordination for challenging managers. Another complaint against involved a state dress code and Gov. Susana Martinez.

Burke arrived for a work detail at the governor’s mansion in September 2014 wearing shorts and a T-shirt. Security officers escorted Burke off the mansion property because of her attire. For her part, Burke said she wore shorts to the mansion because she had recently undergone knee surgery, an explanation Baltzley did not accept.

“… As I understand it, the governor was on site,” Baltzley wrote in an email to Burke. “Even with your surgery and not being able to wear long pants, it would have been appropriate to wear a long skirt vs. shorts.”

Burke replied: “… When she complained about my shorts, did anyone defend me to say I just had knee surgery five days before? And that I have a doctor’s note on file to allow for a deviation of the dress code? Why is it so easy to make [me] the bad guy these days?”

In two complaints to the U.S. Equal Employment Opportunity Commission, Burke calls herself a whistleblower. She says she uncovered computer security violations by others in state government and reported them to her superiors. She alleges they did nothing except try to get rid of her for speaking up.

In Burckle’s email to Burke, he gave her 11 days to contest her firing. She says she has done so, in writing.

Burckle and his executives may or may not have a defensible case against Burke because of her work record. What’s clear at this stage is that firing a cancer patient via email is sure to escalate her grievances and open the way for the confrontation to reach a courtroom.

Ringside Seat is a column about New Mexico’s people, politics and news. Look for it in Monday’s print edition. Follow the Ringside Seat blog at www.santafenewmexican.com. Contact Milan Simonich at 986-3080 or msimonich@sfnewmexican.com.

A state employee who received a termination notice while undergoing treatment for cancer has sued the state and several department officials alleging supervisors retaliated against her because she was a whistleblower.

Lest anyone forget, it was Secretary Burckle’s bright idea to hire convict labor to do the landscaping at the Willie Ortiz Building/State Library and Archives,
State Personnel Office and School Administration Buildings last month when one of the “low risk”, supervised, trustees decided to escape – again – and rejoin the rest of the citizens of New Mexico. This person had a change of clothes, friends, relatives, and transportation waiting for him, so it was not a whim.

On his watch, Burckle allowed a prisoner to escape, a much more serious offense than using up one’s sick leave while on chemotherapy and breaching a password protocol. No, Burckle was not the actual guard on watch. But as a former military officer, Burckle KNOWS that the top dog is responsible for everything that happens under his command. And the GSD Secretary is also in charge of the State of New Mexico Insurance Benefit Plans. Perhaps the idea of paying out cancer benefits to Heather’s caregivers would not fit in with his budget.

Oh--the immediate area is adjacent to a skate park, children's playground and public library. Of course the Secretary is not responsible for these properties, no matter what the convicts do after leaving State grounds performing State duties.

This is the way the state operates. They like hiring thieves, embezzlers, liars, rapists and cheating the public. If you are not one of these you cannot work for the state. Plain and simple.

Unfortunately too many have had that one boss that is impossible to work for, difficult, or even unethical. I am beyond distraught at the struggles Heather has gone through, as documented in this piece. Now at the lowest time in her life, fighting cancer, the State of NM has used her cancer and "whistle-blowing" as a reason to let her go?

I cant believe these tactics to be legal or ethical and am severely disappointed in the State of NM and those in charge. Thank you for writing this story to raise awareness of our EEOC and FMLA rights. Its fitting on labor day that you run this.[sad]

Cancer as a convenient HR tactic after a series of dubious reprimands: Shame on you Secretary Burckle. Heather should not have to tackle this fight on top of fighting for her life. Knowing Heather, however, I believe she has the metal to fight for justice. She always has- Que Viva Heather!