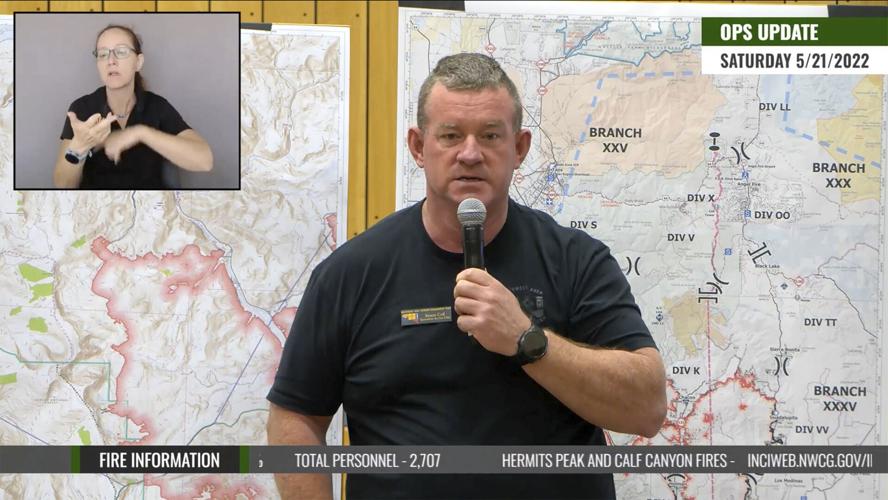 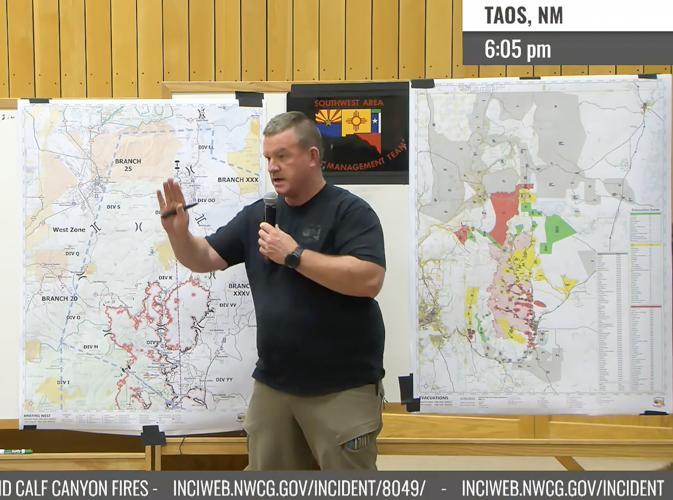 Jayson Coil speaks during a Saturday morning update on the Hermits Peak and Calf Canyon Fires.

Jayson Coil speaks during a Saturday morning update on the Hermits Peak and Calf Canyon Fires.

Anyone watching the virtual briefings on the Hermits Peak/Calf Canyon Fire has seen Jayson Coil.

The 52-year-old Sedona, Ariz., assistant fire chief has been one of the constant figures overseeing the battle against the blaze, which topped the 300,000-acre point earlier this week.

Coil, who has been a firefighter for 24 years, is a U.S. Army veteran who served as a combat engineer. Earlier this week, Coil, an operations section chief on the fire, agreed to a telephone question-and-answer session about the fire, which has burned a breathtaking amount of public and private land and hundreds if not more than 1,000 homes.

Question: The Hermits Peak/Calf Canyon Fire is now the largest fire in New Mexico history. What is the significance of that?

Answer: That’s an interesting question. I think about the previous largest fire in New Mexico history; the fire on the Whitewater-Baldy Complex [in 2012]. There have been a lot of fires that were smaller that were more complex — Los Conchas. The size of the fire is certainly a benchmark that gets attention in the media, but the way each one of the drainages between where the fire originates and where fire is now has a different community in it, with all their unique values and nuances. … With the acequia systems, everything that is part of Northern New Mexico, that helps make the complexity of this fire far greater than any fire New Mexico has ever seen.

For me, having been on the Biscuit Fire [in Oregon and California], Wallow [Arizona], the Rodeo-Chedeski [Arizona], the Big Turnaround [Georgia], all of which grew to over the half-million-acre range, this is still the most complex fire I’ve seen.

Question: Have you ever seen a fire behave like this in your firefighting career?

Answer: Northern California is known for persistent fires and deep, challenging terrain that makes it difficult to put those fires out. In the Southwest though? No, we’ve never seen a fire like this. … The inability to make gains, the background situation with the fuel dryness and ongoing drought coupled with an apparently high number of wind events — no, I’ve never seen a fire like this.

Question: Can this fire be quelled without some kind of rain event?

Answer: Yes. If I say no I’d be risking a whole bunch of people’s lives for no good reason and I don’t think that’s the case. The strategy we have going on right now that we’ve implemented and the tactics being used on the ground to support that strategy, they all allow for the best opportunity for us to gain ground on this one.

Question: Is there an estimate on how long this fire could go? Is it likely firefighters will still be on the ground in four, six weeks? Eight weeks?

Answer: We most certainly could have firefighters on the ground for four, six or eight weeks.

With this fire there are three things — fuel transitions, weather transitions and applying overwhelming force. Being able to apply overwhelming force when the fire is at this scale is not really possible. You can’t squeeze enough people together in an area to do that, especially in this terrain.

Then look at fuel transitions — that piece of land between Chacon and Guadalupita, that northern part where it is growing. A combined effort of having a couple, three days of moderated weather and having already scouted everything out and being ready to pounce when that growth occurred with air, ground resources, gave us a chance to be successful.

Question: You talked about building contingency lines farther out to give firefighters the best opportunity for success. Was that difficult early in the fire because of its proximity to populated areas?

We have an opportunity where the fire is not growing on the same rate. We have a little space between the next communities — Angel Fire, Black Lake, the [N.M.] highway 64 corridor, with Peñasco out to the west, so we have an opportunity to take advantage of that space and not deal with those tradeoffs every day. It allows you to have a more congruent execution of your plan.

We’re supposed to be adapting, right? Because we don’t control the variables in the environment. When you choose to pivot, it is not without consequence … you move a hotshot crew that has to hike out two miles, you lose four or five hours. You have to compound that loss with all the different pieces here. Even things like getting out of our logistics briefings fast enough where we are not on the line fast enough, all of those add up.

Question: When can we expect authorities to start looking into the cause of the Calf Canyon Fire? Who will do that?

Answer: I do not know the answer to either part of this question.

(Santa Fe National Forest spokeswoman Julie Anne Overton wrote in an email: “The Forest Service Law Enforcement and Investigations group does the investigation on cause of fire when it’s not immediately apparent. I know they are working on the final report but I don’t have a good sense of the timeframe for all the steps. I would guess within a couple weeks.”)

Question: What are the pros and cons of firefighters winning, making ground, beating the fire and and then of losing ground, losing structures? Is there pride when you progress and disappointment when you don’t?

Answer: There’s a group of hardworking and dedicated professionals who deserve all the praise for the work they are doing in their field … if you know you are doing something significant, you are working hard every day, you get the opportunity to make decisions on the fly within that space you are given to make a difference, and you can relate how the work you did contributes to the overall success, you want to keep doing it.

But there are situations over the past few years where firefighters go in and get their teeth kicked out and you are unable to define success in terms of progress on that situation, and that has an impact.

Question: Have you seen areas of this fire where prescribed burns would have helped?

Answer: If we look back at natural fire regimes and ecosystems in the Southwest, we should ask ourselves, “Are conditions right now representative of this [action] and if not how do we adapt to those conditions?”

Question: No one has been hurt yet in this fire — what kind of miracle is that?

Answer: I think some of contributing factors to that — one is, this is earlier in the season so people are coming in and not being as fatigued as later in the season.

There’s an approach to the emphasis put on firefighter safety by all land management agencies that has changed over many years. There is absolutely no expectations that firefighters will engage in work that presents an unnecessary risk. When we do engage in risky work it has to be intentful.

Now we say “Make sure the perimeter is secure and we don’t advance on the line because of wind events. Make sure the people who are out there making the calls are appropriately trained to make those judgment calls.” We only take a risk when it is appropriate.

Question: Can you paint a picture of what it’s like to be on the lines fighting a fire?

Answer: I’m not gonna paint my picture anymore. My picture is I get to sleep in a hotel room. I work long days, yeah, I press buttons on the radio and work a lot on maps and talk to a lot of people.

But people who are out there on the face [of the fire] doing the hard work are working the same long hours. A lot don’t get to sleep in hotel rooms, the ones who work at night we try to get to sleep in a place that is air conditioned in the day.

Your lunch is put in a backpack, it’s pretty squished when you eat it, you eat it with dirty hands on the side of a hill with smoke tearing up your eyes and figuring out if you are doing the right thing or if you should be doing something else [on the line].

The [fire] leaders work several dimensions based on the terrain — what should we do with the fire, are our actions going to have a long term outcome of this incident? A lot of people are engaged in difficult work that involves sharp mental skills and physical ability.