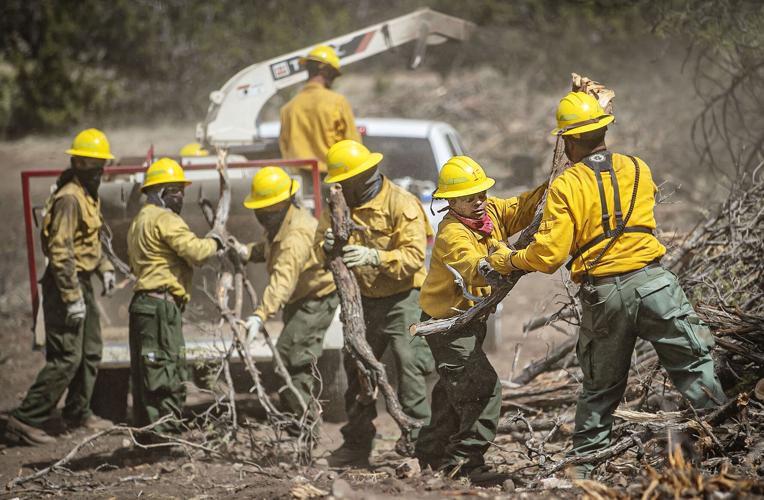 A crew chips up brush while repairing areas along a bulldozed fire line near Las Vegas, N.M., last week. The line was built as part of suppression efforts to stop the spread of the Hermits Peak/Calf Canyon wildfire, but the line is being removed to prevent erosion. 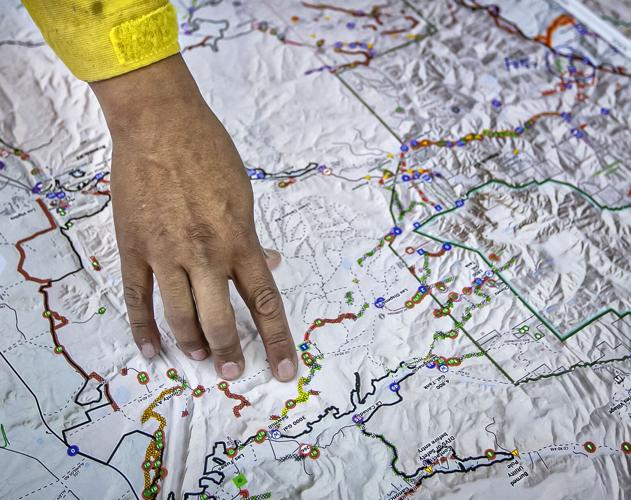 RIGHT: Andre Silva, a marine wildlife biologist and program manager for Santa Fe National Forest, points out last week areas where bulldozers and other heavy equipment have naturalized fire lines and constructed water bars to prevent erosion. Silva said 73 miles have been completed, nine are in progress and 277 still remain. BELOW: A crew chips up brush while repairing areas along a bulldozed fire line near Las Vegas, N.M., last week. 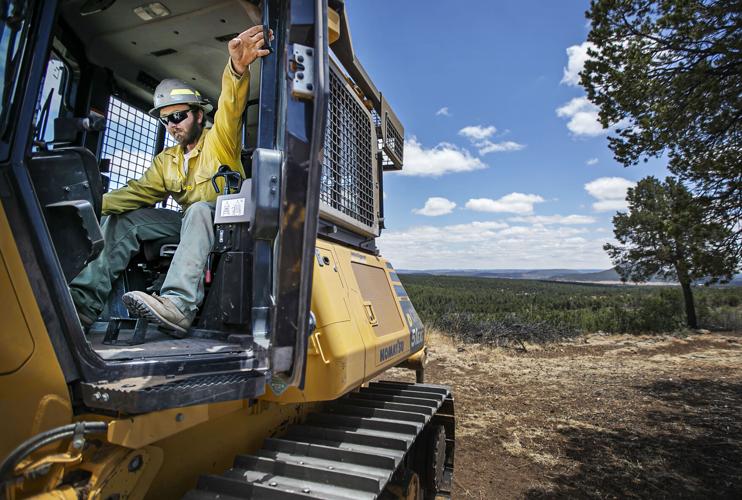 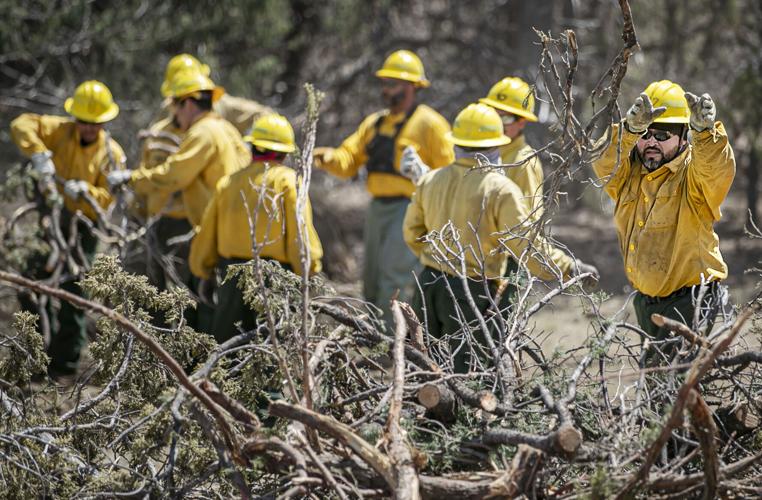 A crew chips up brush while repairing areas along a bulldozed fire line near Las Vegas, N.M., last week. The line was built as part of suppression efforts to stop the spread of the Hermits Peak/Calf Canyon wildfire, but the line is being removed to prevent erosion.

RIGHT: Andre Silva, a marine wildlife biologist and program manager for Santa Fe National Forest, points out last week areas where bulldozers and other heavy equipment have naturalized fire lines and constructed water bars to prevent erosion. Silva said 73 miles have been completed, nine are in progress and 277 still remain. BELOW: A crew chips up brush while repairing areas along a bulldozed fire line near Las Vegas, N.M., last week.

LAS VEGAS, N.M. — The bevy of workers clad in yellow shirts and hard hats trailing behind a growling chipper contrasted sharply with piñons lining a dusty swath that had been cut by a dozer.

The crew fed brush, branches and small logs into the rolling machine, which ground up the material with a deafening caterwaul before spitting out chips along the edge of the dozer line.

A dozer or excavator will move the chips onto the swath to control erosion and, with some grass seed mixed in, help regrow vegetation on the barren dirt.

This winding, hillside dozer line could pass for a road or a hiking path but was created as a defense against the massive Hermits Peak/Calf Canyon Fire when the blaze bore down on Las Vegas from the north. To everyone’s relief, this line was never needed.

Now it must be cleaned up. It is one of countless containment lines dug, burned or plowed across hundreds of miles to combat New Mexico’s largest wildfire on record.

Known as suppression repair, the unglamorous work of restoring the defensive lines in the aftermath of a colossal blaze is a lesser-known part of wildland firefighting but a task deemed critical to avoid erosion and scarring of the landscape.

It is separate from the “burned area emergency response” — or BAER — the U.S. Forest Service does to assess and help fix the broader damage a wildfire inflicts on lands, watersheds, homes and infrastructure.

“Here you need a whole army of guys to get it back to its former glory — help nature repair itself,” said Wenceslao Haro, who was overseeing a crew doing the work in the Las Vegas hills.

The workers, all wearing face scarves as shields against the chipper spewing heavy dust, were immersed in a flurry of activity. They sliced up branches and logs with a chain saw and stacked brush and wood chunks in neat piles along the dozer line.

They typically labor 14 hours a day for two weeks before getting two days off and then returning for another two weeks, Haro said.

The sheer magnitude of the record-setting fire “stands toe to toe” with the huge ones he has dealt with in California, he said, although New Mexico has much less housing that can be ravaged in a big blaze.

Suppression repair on this scale could take a couple of months.

“Maybe more with the footprint this fire left,” Haro said.

Restoring as much as possible

At Luna Community College in Las Vegas, an operations center has been set up to orchestrate suppression repair.

A large, color-coded map spread out across a table shows the progress being made in the wake of a fire that’s still raging.

Dozer lines by far require the most work to fix because they are wider and usually deeper than the lines crews build by hand, said Andre Silva, a wildlife biologist and program manager for the Santa Fe National Forest.

Not all of the estimated 562 miles of dozer lines require repair.

As of Wednesday, there were 73 miles of completed work, nine miles in progress and 277 miles of work that lie ahead, Silva said.

There are 12 to 15 resource advisers coordinating the suppression repair just in the southern portion of the burn area, he said, adding he wasn’t sure how many are in the northern zone.

The dozer lines’ depth depends on the terrain, ranging from a foot or more on steep, rocky terrain to little more than a few inches on pastures.

During repair, a crew will cut “water bars” across the dozer and hand lines to divert runoff away from these swaths and break up a torrential stream that could cause erosion or flooding, Silva said. Water bars can range from a trench to a shallow depression, which again depends on the terrain.

Dozers create earthen berms along the sides of the lines when they’re digging out the dirt.

A dozer or excavator can push the berms onto the swath to help fill them in, Silva said. Rocks, fallen trees, branches and other loose debris can be added, partly to act as a dam and also to block access to trespassers.

Grass seeds are spread on the line to replenish the soil enough for natural grasses and vegetation to take root and regrow.

You’ll never completely restore the landscape after it’s been altered this much during a wildfire, but the goal is to increase its chances of regenerating as much as possible, Silva said, especially by reducing erosion.

“If the erosion really takes over, then nothing can establish there,” he said. “So that’s really the point of this kind of multipronged approach.”

Some landowners welcome a dozer line, either because it forms a pathway into less accessible areas of their properties or improves an existing road.

On a rural property outside Las Vegas, the owner requested federal fire managers finish grading the dozer line that was plowed onto a skinny road stretching across meadows into forested terrain.

It’s important to knock down the berms lining the sides of the new roadway, otherwise they will hold water and cause overflow, said Garrett Dunn, a Bureau of Land Management task force leader.

Crews try to repair the land reasonably close to where it was before fire suppression took place, Dunn said. Officials talk with the landowners to get a clear idea of what they expect from restoration.

“We’re minimizing the impact that the suppression work has on the land,” he said.

Within a wooded section of the land, a dozer operator scraped shallow water bars into the dirt road, just enough to funnel runoff down the embankment but not deep enough to impede drivers.

The steeper the slope, the more of these mini-diversions were needed to act as relief valves.

Cody Longley, the dozer operator, had been doing suppression repair for a couple of days after spending weeks digging containment lines. He looked forward to taking a weekend off after working for two weeks straight.

Longley, who has done fire suppression for 13 years, said he’s no stranger to big fires, but this one is unusual in how early it started.

And now it’s dragging on, creating a mental demand that can be a challenge, he said. “I didn’t think it was going to last as long as it has.”