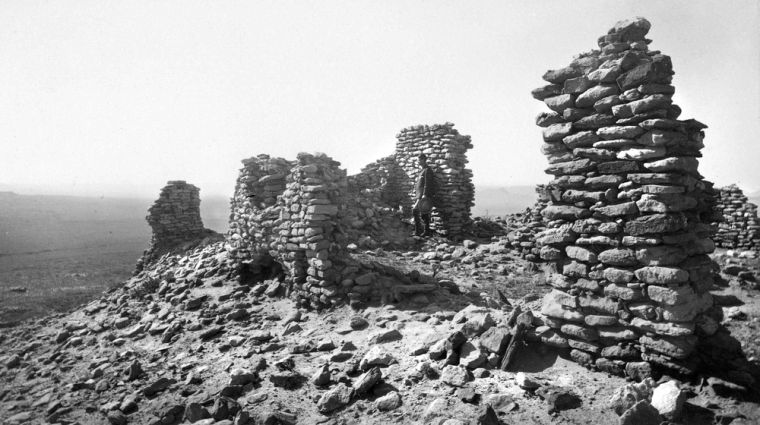 The ruins of a massacred Hopi village atop Antelope Mesa in Awatovi, Ariz., circa 1915. Courtesy Palace of the Governors Photo Archives, Negative No. 29947 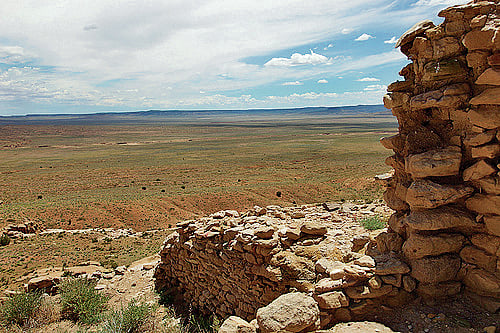 Located on the Hopi Indian Reservation, Awatovi Ruins is the site of one of the most important Hopi Indian villages encountered by Coronado’s men in 1540. It contains the remains of a 500-year-old pueblo and a 17th-century Spanish mission complex. Courtesy photo 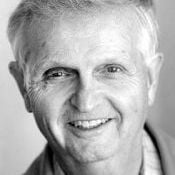 The ruins of a massacred Hopi village atop Antelope Mesa in Awatovi, Ariz., circa 1915. Courtesy Palace of the Governors Photo Archives, Negative No. 29947

Located on the Hopi Indian Reservation, Awatovi Ruins is the site of one of the most important Hopi Indian villages encountered by Coronado’s men in 1540. It contains the remains of a 500-year-old pueblo and a 17th-century Spanish mission complex. Courtesy photo

One of my favorite periodicals is Indian Trader, published out of Gallup. The articles are slanted toward interests of Indian art and artifact collectors. But good historical pieces are also included.

An excellent example was Massacre on Antelope Mesa by Alex Witzeman. It deals with a tragic and little known episode that occurred among the Hopi in late 1700.

The incident was the massacre of the pueblo of Awatovi, perhaps the most complete act of genocide ever recorded in the Southwest. For years, I have been collecting material on the subject and now have a substantial file.

Even after 300 years, the nature and extent of this tragedy is difficult to explain. A distinguished Taos author, the late Frank Waters, once wrote that the massacre seared the Hopi’s soul with “a guilt they were to bear forever.”

The original Spaniards knew the Hopi by the term Moqui. In the 17th century, they built three missions among them, but these were destroyed during the Pueblo Revolt of 1680 and their priests slain.

During the reconquest of the 1690s, Gen. Diego de Vargas returned to the Moqui villages in northern Arizona with his army and accepted their rather sullen submission. But he placed no friars or soldiers among them.

Then in 1700, two padres, Fray Juan and Fray Antonio, came to Awatovi from Zuni and began preaching. Surprisingly, the Awatovis appeared receptive. Many remembered Christian practices dating back to the pre-revolt years.

Awatovi was located atop Antelope Mesa, some distance east of the other villages. This separation gave it an air of independence, much resented by the remaining Moquis.

After a few weeks, the Spanish missionaries went back to Zuni and from there wrote a letter to the governor at Santa Fe. Saying they wished to rebuild the Awatovi church, burned in 1680, they asked for a soldier escort.

But before the padres received a reply, news reached them that Awatovi was no more. The other Hopi had assembled an army and under war chiefs sent it marching eastward to exterminate the defecting town.

They fell upon it at dawn while all the men were in the kivas preparing for a pending ritual. The attackers pulled up the ladders, trapping the occupants, then threw flaming bundles of sticks into the kivas. Everyone inside was smothered or burned to death.

Next, the vengeful army went on a rampage through Awatovi. Archeologist Jess W. Fewkes found the grim evidence when he excavated part of the village in 1892.

Wholesale slaughter of the population had occurred near the church. “The earth was literally filled with bones,” he reported, “left where the dead fell.” Fewkes noted that most of the skulls were broken, some pierced with stone weapons.

More excavations in the 1970s raised the possibility that cannibalism had been practiced. That subject, among the ancient Anasazi, has been widely reported in the press.

A pathetic remnant of Awatovi women and children were herded together and led away by the victors. According to Witzeman, at one place on the road, the warriors fell into bitter argument over distribution of the captives. That led to renewal of the massacre at a place known since as Skeleton Mound.

This site also has been excavated, and Frank Waters says that the victims, women and children, were tortured and dismembered. Only a few were spared, and they were dispersed among the leading Hopi towns.

What possibly could have inspired such fury and such harsh treatment of Awatovi? Historical consensus suggests that the village was condemned by its neighbors for religious treason. Preserving traditional Hopi ceremonialism from a renewed Christian threat had produced this horrifying event. What other motives might have inspired the calamity will forever remain unknown.

Decades ago, I walked over the mounded ruins of abandoned Awatovi. Scattered on the surface lay large chunks of pottery, broken apart on the morning of the massacre. It was a dismal place, inhabited only by ghosts.

I understand the Hopis have closed the site and no longer allow casual visits. Perhaps that’s the best policy.