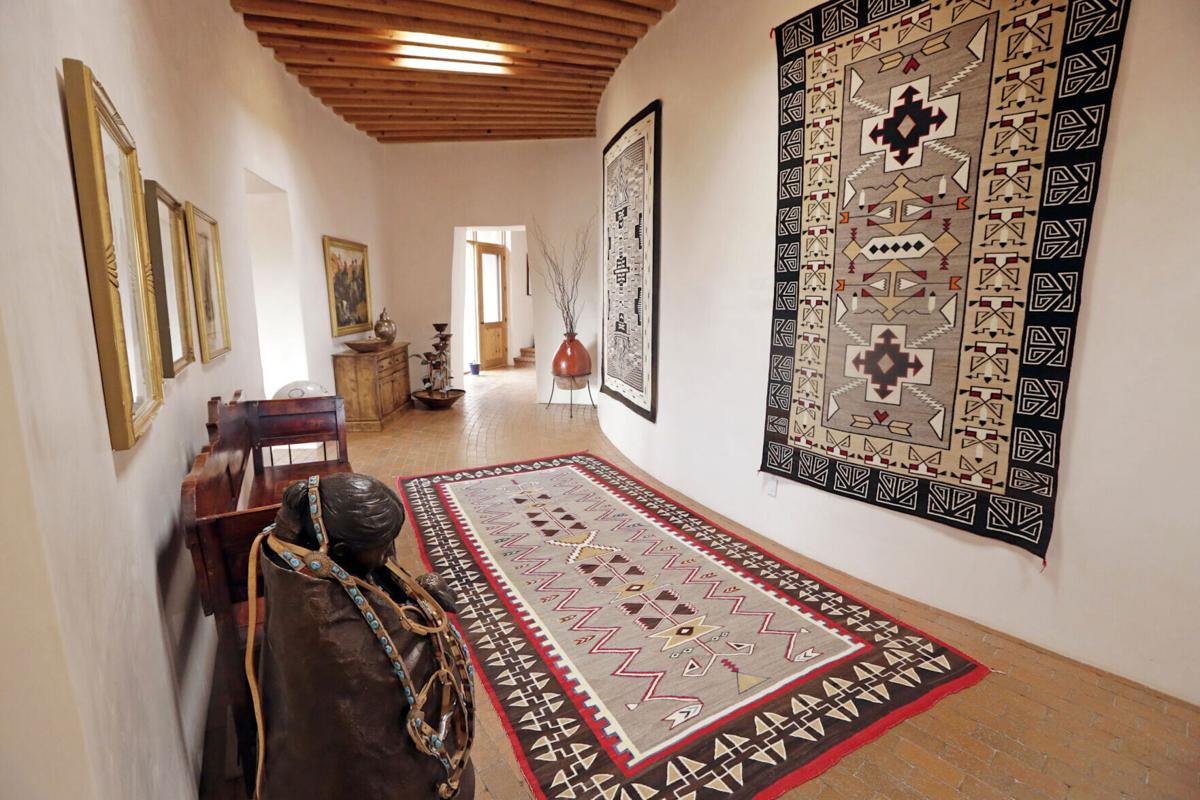 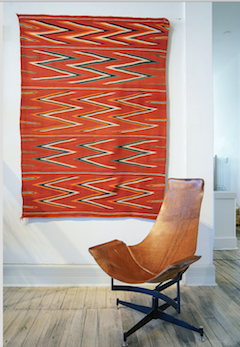 A Navajo wedge weave blanket made in the 1880s on display at Shiprock Santa Fe. 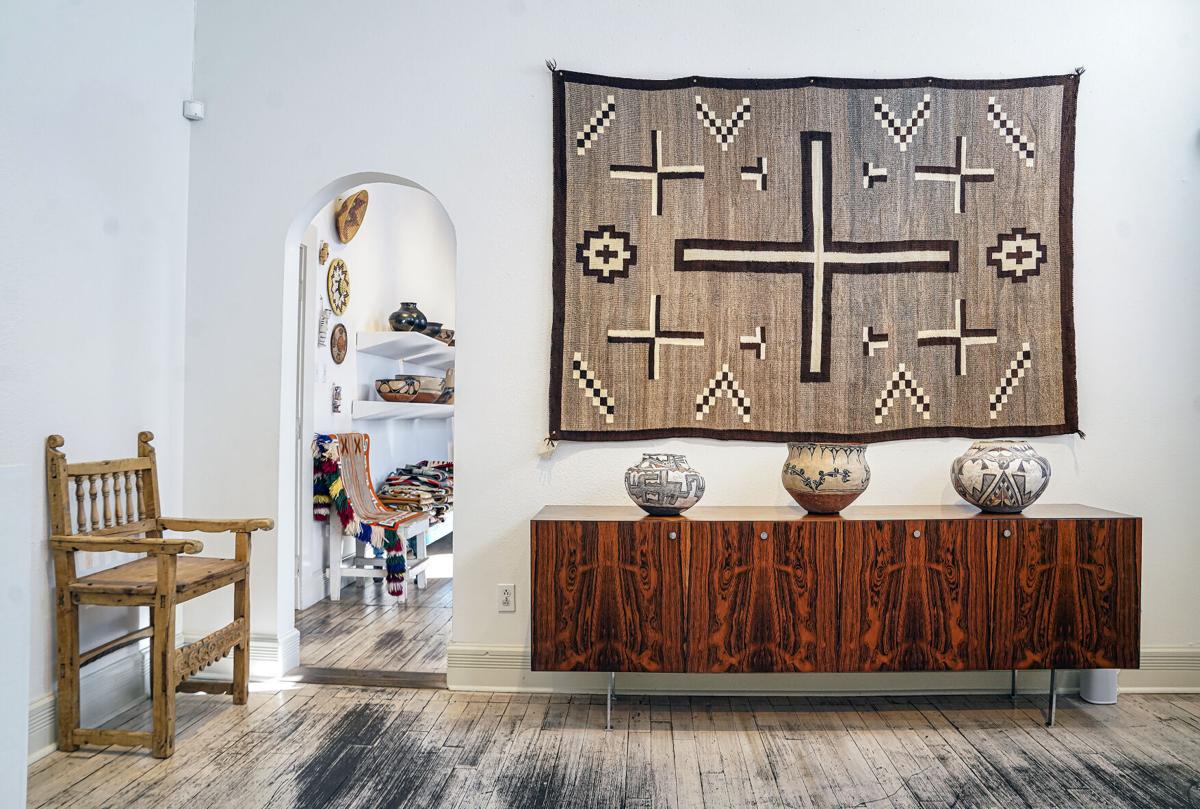 “When it’s on the floor, it’s a rug. When it’s on the wall, it’s a blanket,” a local collector of Navajo weavings opined. Yet, it seems, where a weaving is displayed does not determine whether it’s considered a rug or blanket.

According to Shiprock of Santa Fe gallery director Paul Elmore, Navajo weavings from the late 1800s, up until around 1910 when the trading post was established, were primarily made as wearable garments for utilitarian purposes, such as blankets and shawls. Once the railcar and trading posts took hold, and store-bought clothing was in favor, Navajo weavers began to style rugs in heavier, dense fabrics to sell instead.

No matter what you call them, using rugs (or blankets or shawls) on a wall adds dimension and warmth to a room. Textile wall hangings are also great sound absorbers and insulators.

Lydia Hodgson Stinnett found this out by chance. She loved the circular walls of her La Tierra Nueva home and thought them unique. It was only after she moved in that she realized the challenge curved walls propose in hanging picture frames. With the help of an interior designer, Hodgson Stinnett decided to hang two large Navajo rugs for the entryway corridor of her home — one titled “Two Grey Hills” and the other, “Teec Nos Pos,” which means Trees in a Circle. Both rugs have a geometric pattern that complements the home’s large cream-colored walls and brick floors.

“I figured whatever I hung had to be soft and forgiving,” she said. Other artifacts Hodgson Stinnett collected over the years, and uses as wall décor, include a Nez Percé Saddle Drape from 1900 that watches over the dining room table. Drapes were typically laid across the rump of a horse behind the rider and were decorated with buckskin leather fringe which dangled on each side.

“It’s from a Chief, I am told,” said Hodgson Stinnett. Chief Joseph, perhaps?

For Santa Fe resident Jann Shepard, her love of textiles goes well beyond necessity and began in childhood. Her mother started to collect Navajo rugs in the 1940s and fostered her love of the craft. She feels that weavings are a form of living art. Her home is decorated with Navajo rugs and other handcrafted fabrics which she places on walls, as well as on benches and tables.

Placing rugs for many uses “gives you another view of the art, and provides texture and warmth to a space,” she said.

In particular, Shepard favors the pictorial rugs that the Navajo often weave. She admires that each rug tells a story, expressing what is valuable in the culture from which it came.

“It’s nice to have that meaning around you,” said Shepard.

One of her favorites is a weaving that shows a father in a dining room serving children peanut butter and jelly sandwiches. “It tells such a good story, and you can see the mountains in the background through the window.”

Shepard tries to encourage people to learn about the art form and recommends attending fiber festivals. “The Taos Wool Festival is a great show,” she said. “You can sit down with the weavers and talk about what they are creating.”

“It gives you a great perspective of the process and how labor-intensive weaving is,” she added, which starts with shearing sheep and dying wool.

“Learning about the whole process gives you an appreciation for the craft,” concluded Shepard, which is likely the reason people choose to hang textiles as decorative wall art instead of laying them on the floor.

Shiprock’s Elmore said it’s a 50/50 mix of people looking for Navajo textiles — half are wanting something for the floor and the other half want something for the wall. He often collaborates with interior designers and film set directors to find the right weavings for a given space and offered that Navajo rugs work well in contemporary homes that often have a lot of white in the interior.

“Double saddle blankets work really well too,” he added. “They’re about the size of a painting and easy to hang.”

Speaking of hanging, Shepard tends to use carpet strips with tiny nails that she said don’t interfere with the weavings. Other times she attaches weavings to a quilt rod or plywood with Velcro so the pieces lay flat against the wall, as if glued to it.

Fine Art Framers general manager Erika Palmaffy mounts rugs and other textiles for clients and said there are various ways to frame weavings, depending on how much a client wants to spend and the size and style of the pieces.

The hardest way to frame it is to stretch float mount the piece in a shadow box, commented Palmaffy.

“It’s the most involved and expensive way to mount, but it makes an impressive presentation, like in a museum.”

Another method is to stretch the textile on a pre-stretched fabric attached to a canvas bar — typically made of Poplar wood, without any glass or Plexi—or cut a piece of wood the same width as the textile and hang.

All that said, Palmaffy always recommends doing what it best for the piece.

It’s not a bad idea to put a few of your rugs down on the floor, too, Shepard added with a wink and a smile.

Lovely home, lovely and quality weavings and presentation! We decorate similarly in a much more modest home and doing so is also beautiful. The quality of weavings shown is excellent and will cost a lot of money so it's worth your time and $ to learn about the weavings, the various places where they are woven and even the artists who created them. Shiprock and Malouf's are excellent Santa Fe galleries on SF Plaza where you can see these works of art in person. Chimayo Trading Post at the Plaza de Taos just south of town is also nice. There are remote trading posts located all throughout NM. Tees Nos Pos, Two Grey Hills, and Todalena are excellent trading posts you can visit. Add in Richardson's and Bill Malone's trading posts in Gallup and the Hubbell in nearby Ganado. Sometimes you must ask to be let into their "Rug Room" where you will find weavings and other art forms made by the talented native artists in the area. AAA has a great map called Indian Country where every trading post is marked. The maps are free for members but they sell them at a reasonable price as well. The map is necessary since they are located in remote areas, sometimes off of unpaved side roads. You can use the map and look up any trading post on line...its helpful because some have now created their own websites. Others reading this article may want to include some of their favorite trading posts or galleries in the comments section.