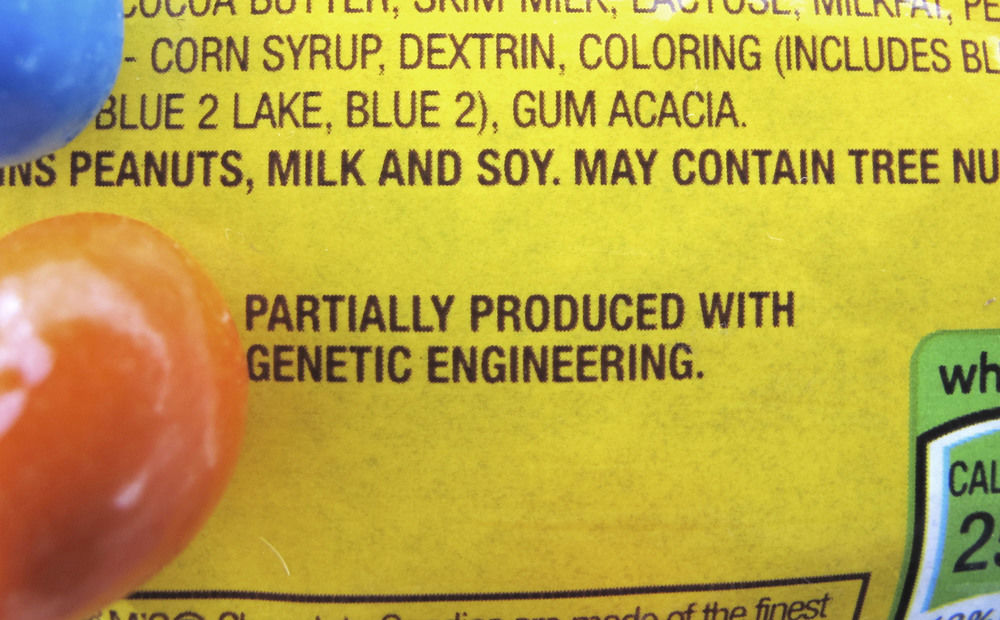 FILE - This April 8, 2016 file photo shows a new disclosure statement which reads, "PARTIALLY PRODUCED WITH GENETIC ENGINEERING" on a package of candy in Montpelier, Vt. On Friday, July 1, 2016, Vermont will become the first U.S. state to require the labeling of foods made with genetically modified ingredients. (AP Photo/Lisa Rathke) 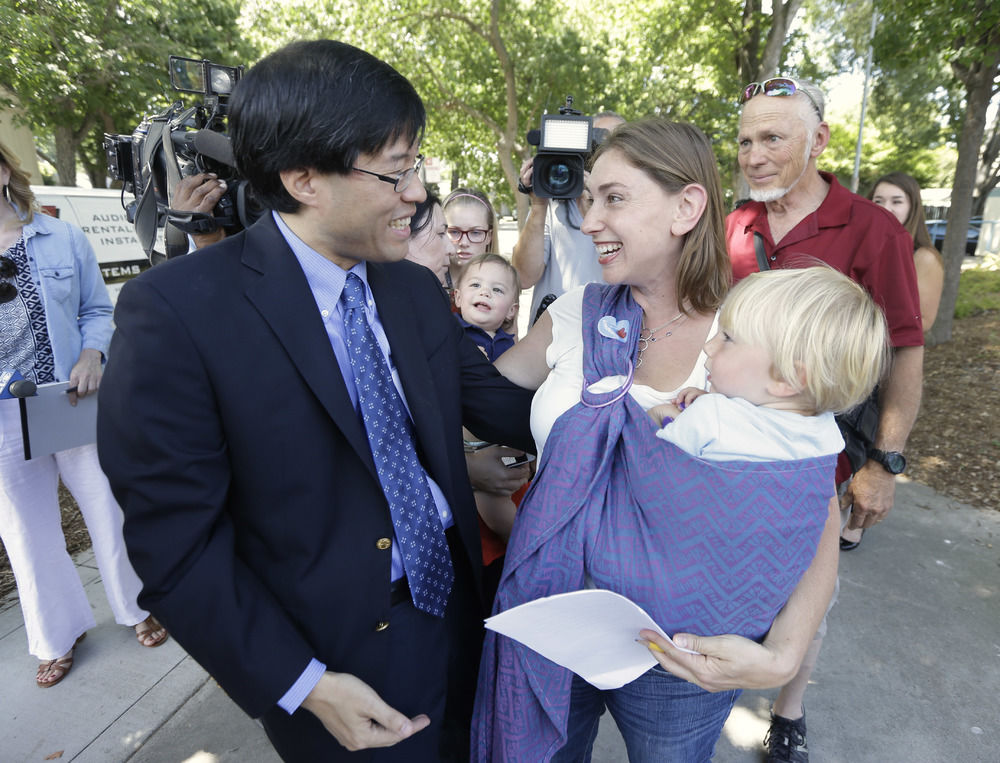 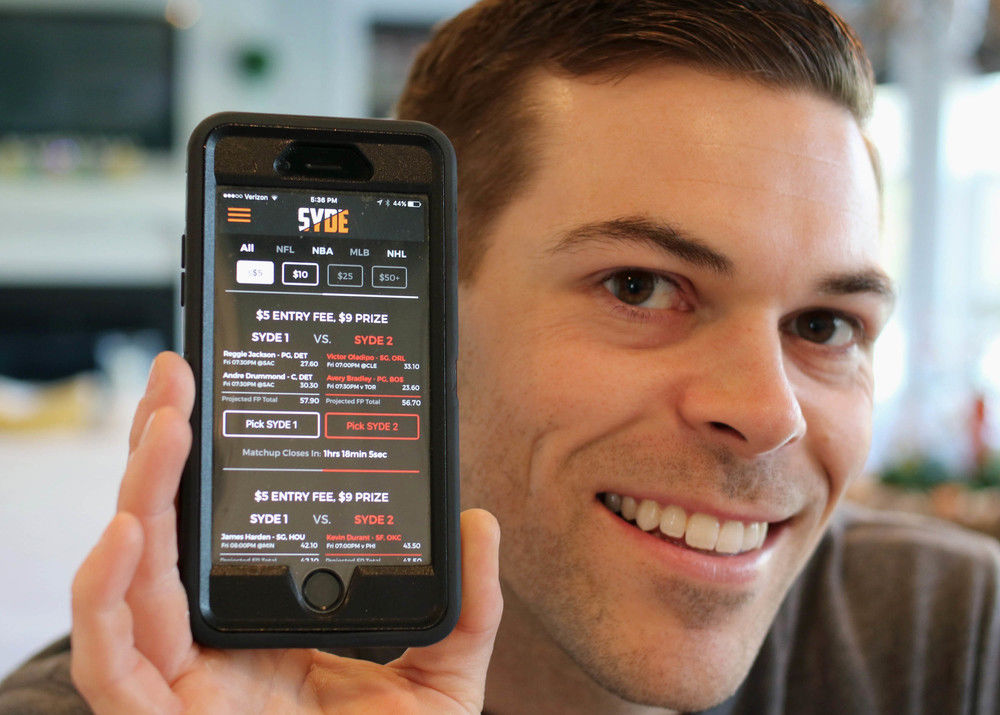 FILE - In this March 18, 2016 file photo, fantasy sports player Scott Burlingame poses with the Syde site on his smartphone at his home in Aldie, Va. On Friday, July 1, 2016, several states, including Virginia, are imposing new taxes and fees on daily fantasy sports games, which have come under increased scrutiny over whether they amount to gambling. (AP Photo/Harry Hamburg)

FILE - This April 8, 2016 file photo shows a new disclosure statement which reads, "PARTIALLY PRODUCED WITH GENETIC ENGINEERING" on a package of candy in Montpelier, Vt. On Friday, July 1, 2016, Vermont will become the first U.S. state to require the labeling of foods made with genetically modified ingredients. (AP Photo/Lisa Rathke)

FILE - In this March 18, 2016 file photo, fantasy sports player Scott Burlingame poses with the Syde site on his smartphone at his home in Aldie, Va. On Friday, July 1, 2016, several states, including Virginia, are imposing new taxes and fees on daily fantasy sports games, which have come under increased scrutiny over whether they amount to gambling. (AP Photo/Harry Hamburg)

New laws targeting abortion are set to take effect Friday in about one-fifth of the states, initiating another wave of restrictions just days after the U.S. Supreme Court struck down a Texas measure that led several clinics to close.

Some of the laws limit when and how the procedure can be performed. Others restrict what can be done with tissue from aborted fetuses. Still others seek to block abortion providers from getting government funding.

They are part of a raft of laws that are going on the books around the country with the start of the new fiscal year July 1. California, for example, will tighten its childhood vaccination requirements, narrowing the ability of parents to opt out. Vermont will become the first state to require labeling of genetically modified ingredients in food. And Idaho and Tennessee will expand the right to carry concealed guns.

Some of the laws face legal challenges, including a Mississippi measure protecting people who object to gay marriage on religious grounds. A federal judge this week struck down a part of the law that allowed county clerks to refuse to issue marriage licenses to same-sex couples.

A look at some of the new measures:

Laws limiting what can be done with the remains of aborted fetuses are set to take effect in Alabama, Florida, Idaho, Indiana and South Dakota, though some are under legal attack.

In Florida, Mississippi and Missouri, new laws would stop tax dollars from going to Planned Parenthood.

Many of those funding and fetal-tissue laws came in response to undercover videos released last summer that alleged Planned Parenthood officials were selling fetal tissue for profit. The organization denied it, and two anti-abortion activists who made the videos face felony charges in Texas.

“Typically, in a major election year, we see a decrease in the number of abortion restrictions enacted,” said Elizabeth Nash, who tracks state policies at the nonprofit Guttmacher Institute, which supports abortion rights. “But this year, we’ve seen a bit of an uptick.”

A lawsuit already is challenging a new Indiana law banning abortions because of the fetus’ race, sex or genetic abnormalities, such as Down syndrome.

Elsewhere, South Dakota will ban most abortions at 20 weeks of pregnancy, allowing misdemeanor charges against providers but not pregnant women.

Mississippi will prohibit a commonly used second-trimester abortion procedure, called dilation and evacuation, in which the fetus is dismembered.

Other new laws will require Idaho abortion providers to give women information about where they can receive free ultrasounds and create a Georgia grant program for “pregnancy resource centers” that typically discourage abortions.

California will no longer allow parents to cite philosophical objections to avoid vaccinating their children against measles, mumps and rubella. The law will now require a valid medical reason for an exemption and will apply to public and private schools.

“This will help restore our community immunity,” said Sen. Richard Pan, a Sacramento pediatrician who introduced the legislation after a measles outbreak at Disneyland in December 2014. The outbreak sickened 147 people in the U.S., mostly in California.

Vermont will require most food containing genetically modified ingredients to have labels that read “produced with genetic engineering.”

Seeds that are genetically modified in laboratories for certain traits, such as resistance to herbicides, generally have been found to be safe by the Food and Drug Administration. But labeling advocates question those conclusions and say consumers have a right to know what’s in their food.

The law could have ripple effects. Maine and Connecticut have passed laws that require labeling of genetically modified ingredients if other nearby states do so.

Food industry groups are challenging the Vermont measure in court.

Starting Friday, Idaho will allow residents 21 and older to carry concealed guns without needing permits or training, making it the 10th state with such a policy. Similar laws took effect earlier this year in Mississippi and West Virginia.

Tennessee will let faculty and staff with concealed gun permits carry their weapons at public colleges and universities.

Georgia will allow employees and students over 18 to carry stun guns on public college campuses. Supporters tout it as a means of self-defense, while critics worry the weapons could be misused.

In Colorado, a new law doubles to 20 years the amount of time after an attack that sexual assault victims have to seek charges. State Rep. Rhonda Fields crafted the bill after two Colorado women claimed Bill Cosby assaulted them decades ago. The comedian has denied any wrongdoing. He is awaiting trial in Pennsylvania on charges he drugged and sexually assaulted a woman in 2004.

New laws in Florida and Georgia will speed up the testing of rape kits — the hair, fluid and other forensic evidence taken from victims. And Connecticut will require colleges to adopt policies requiring “clear and voluntary” consent for sexual activity.

July marks the start of a new budget year in all but four states, and many will be on solid financial footing. A recent report by the National Association of State Budget Officers found that estimated general-fund spending by states has finally surpassed its pre-recession peak in 2008 when adjusted for inflation.

Yet slower revenue growth is projected in the new budget year, and some states — especially those hurt by the downturn in oil, coal and gas — are responding by raising taxes and fees.

Oklahoma is doubling the court costs assessed for traffic and criminal cases. It is also raising fees for divorce, alimony and child-support actions.

West Virginia is increasing its cigarette tax by 65 cents to $1.20 a pack, while also raising other tobacco taxes. The nearly $100 million of projected revenue will help cover a budget hole created by the drop in coal and natural gas prices.

Connecticut’s cigarette tax will rise to $3.90 a pack, the second-highest nationally behind New York’s, as the final step of a phased-in 50-cent increase passed last year.

Several states are imposing new taxes and fees on daily fantasy sports games, which have come under increased scrutiny over whether they amount to gambling. Virginia and Indiana will charge an initial $50,000 fee for fantasy sports websites to operate in those states. Tennessee will impose a 6 percent revenue tax on such companies.

Help your neighbors; cut off the politicians

3rd Congressional District could still be a horse race

It's time for the civil courts to shut down