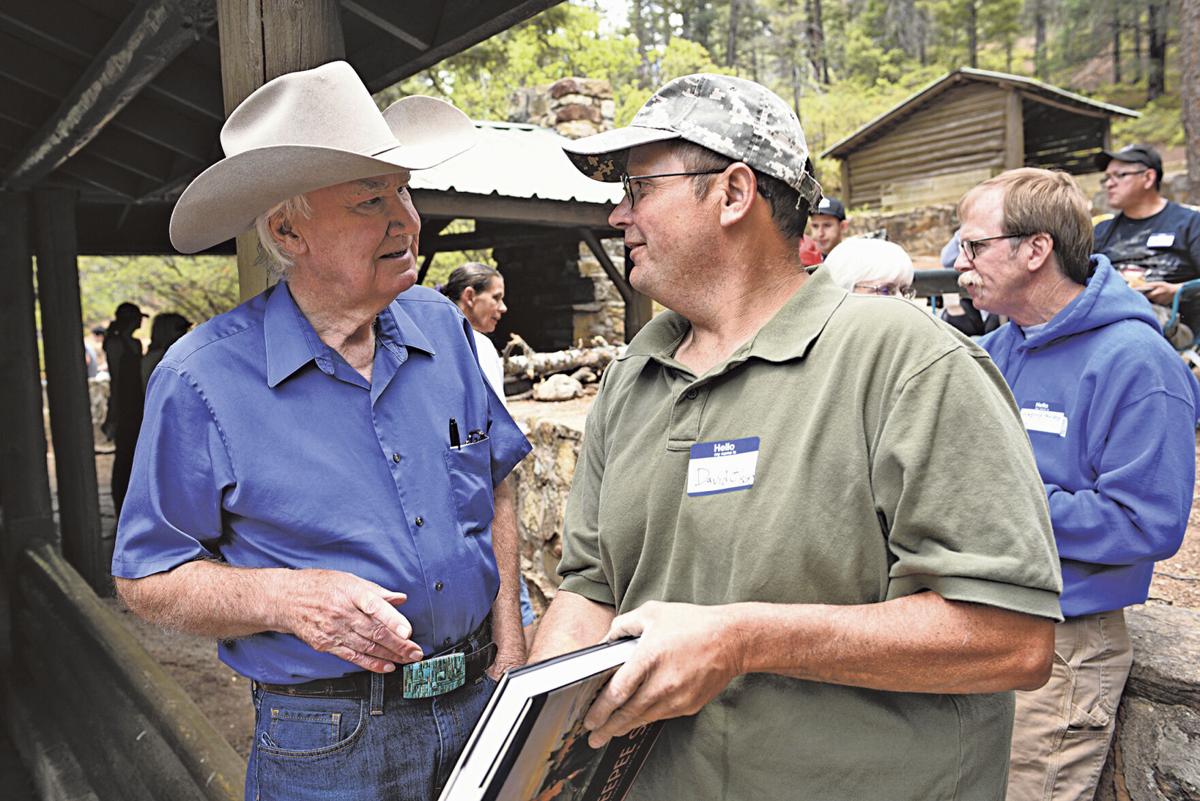 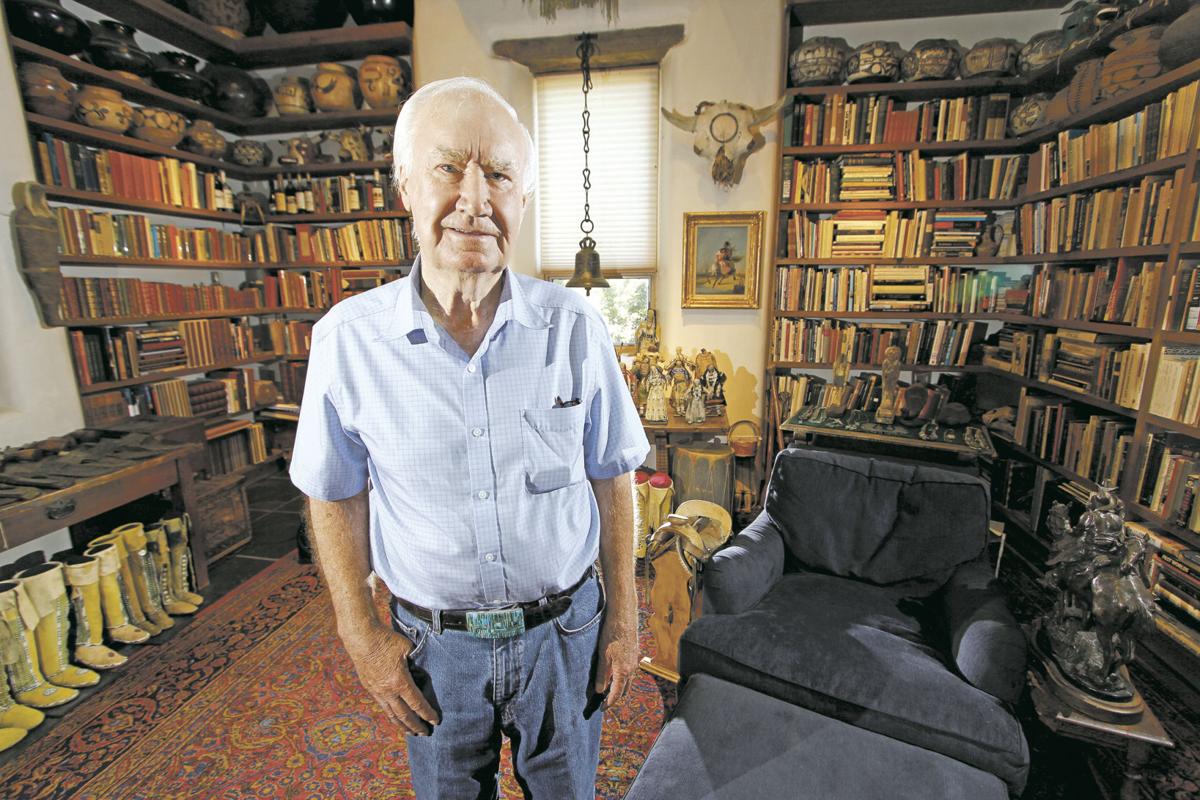 Forrest Fenn served as a fighter pilot in the U.S. Air Force, ran art galleries, wrote numerous books and collected artifacts from around the globe. But he likely will remain best known for the treasure hunt he launched with his 2010 memoir, The Thrill of the Chase.

Forrest Fenn served as a fighter pilot in the U.S. Air Force, ran art galleries, wrote numerous books and collected artifacts from around the globe. But he likely will remain best known for the treasure hunt he launched with his 2010 memoir, The Thrill of the Chase.

Years of writing about people searching for the fabled treasure of Santa Fe’s Forrest Fenn, the eccentric art dealer and Vietnam War veteran.

Years of waiting for the day when I could get the scoop and be the first guy who reported on the man or woman who found the treasure.

And then my boss decides to move me off the Sunday shift and another reporter gets the story.

But, as B. Traven, who wrote the 1927 novel The Treasure of the Sierra Madre, put it: “It is always more convenient to dream of what might be.”

So let’s just reflect on what was — we think — the long hunt for Forrest Fenn’s treasure, one that may be worth as much as $2 million. In a short interview Sunday, he said the search came to an end with a discovery, but like the beginning and middle of this story, there may be more questions at the end than there are answers. After all, Fenn has neither revealed the person who made the discovery nor where it was found.

Which is half the fun.

The other half, though, has been a lot of fun to cover. The undeniable interest, from Santa Fe to Saint-Tropez, has brought with it a menagerie of dreamers and doers who’ve never given up hope they would somehow make history.

For me, there are delightful memories of numerous encounters with interesting, curious people who sincerely believed they knew where the treasure was. At least twice a year for the past several years, I would get an offer from these people to team up with them to search for the treasure with the promise of a 50-50 split and a front-page news story if we succeeded.

In many cases, they wanted me to make the trek alone, with directions they would provide me.

More often than not, they said they were too ill or old or financially broke to make the trip to Northern New Mexico, where they were sure the treasure was stashed, based on clues Fenn left in a poem encouraging people to get out on a good old-fashioned scavenger hunt.

One woman from a neighboring country called me and an editor at the office to say she knew the precise location, just a couple of hours north of Santa Fe, on state land, and she was willing to give up her husband and her job to get her mitts on the loot. I would accompany her for two reasons, she said: To report on her find and to protect her lest other treasure hunters were following her and planned to steal the cache.

Now, when it comes to protecting others, I’m basically a weakling and a coward. In fact, I work as a weakling during the day and moonlight as a coward at night.

At the last minute, she told my editor and me that if she found the treasure, she would not want a photo, a story, nor anything else from me except to confirm in print she found it.

So that was that.

She wasn’t the only one who made such offers. A guy who said he was calling from Pennsylvania and called himself “Dr. Decipher” told me a legitimate fortune hunter would be in touch soon to lead me to the treasure — and a scoop. That never happened. (On a personal note, I should own up to the fact that I’ve dated several local monied women who suspected I was a different kind of fortune hunter. I didn’t get anywhere with those quests, either).

I treated all of these treasure seekers seriously, responded to them professionally and asked them to keep me posted on what, if anything, they found. Some did. Some didn’t.

It wasn’t all fun and games. I had to report on the deaths — at least five associated with the search for the treasure — and talk to loved ones those treasure seekers left behind.

And there was gunplay — sort of. I covered the story of the guy who broke into Fenn’s property to search for the treasure and how Fenn and one of his daughters held the intruder at gunpoint until the police showed up. Fenn’s dog didn’t bark at the burglar, but when I showed up at the scene, he let loose with a threatening tirade of canine caution to tip Fenn off that a suspicious character was on the grounds.

The paper’s coverage led me into the court system — as with the story I wrote about the Colorado man who filed a lawsuit against Fenn, suggesting he was defrauding people with the search, and then the story about the Arizona man who wanted to intervene in that case because he believes the treasure is a virtual art installation of sorts. I wouldn’t be surprised if more lawsuits come out of this saga yet.

Now it looks like it may be all over — at least, the big scoop story.

One treasure hunter called me Sunday to say now everyone involved with the hunt has to go through “a mourning process.”

I get it. People wanted to believe there was something out there, maybe something beyond the actual treasure itself — a quest to prove a point, or get their name in the newspaper, or demonstrate to someone they love that they could pull something like this off.

Maybe they wanted fame, though the guy Fenn said found the treasure is so far avoiding that.

Maybe they wanted to avoid just becoming “an asterisk in a book that was never written,” as Fenn himself once put it.

I get that part, too, especially now that I’m an asterisk.

In retrospect, I should have gone with the lady who wanted me to protect her. I could have brought Fenn’s dog with us for that job. Maybe we wouldn’t have found anything, but there still would have been some good hours enjoying the thrill of the chase.

And who knows? Had she found the treasure, and maybe left her husband ...

Robert Nott, a reporter for The New Mexican for more than 20 years, is still trying to find the keys to his 1994 Jeep Wrangler.

The Santa Fe author and artifacts dealer said he hid a chest full of goods in the Rocky Mountains in 2010. An estimated 350,000 people have gone on the hunt. Many quit their jobs to do so. Some died in the search.

Hoax of the century! There was never any real proof it was actually put out there to find, Fenn got into hot water with law enforcement, Yellowstone bei g damaged and his endangered family. So he himself called it off with a supposed finder. It's all a crock!

Well, you may have had fun, Robert, but people did lose their lives and no one can be sure that there was a treasure or that it was found. Perhaps you should talk about the less savory parts of Fenn's reputation to give people an idea of the credibility of this guy. Was it WC Fields who said a sucker is born every minute?

Stefanie, I believe it was P.T. Barnum who said that.

Same on you. Seriously!!

Shame on you! Seriously!

The finder may never be known. No doubt the IRS will begin its own treasure hunt. Likewise the NM Bureau of Revenue. With oil taxes dried up, the Gov needs her cut.