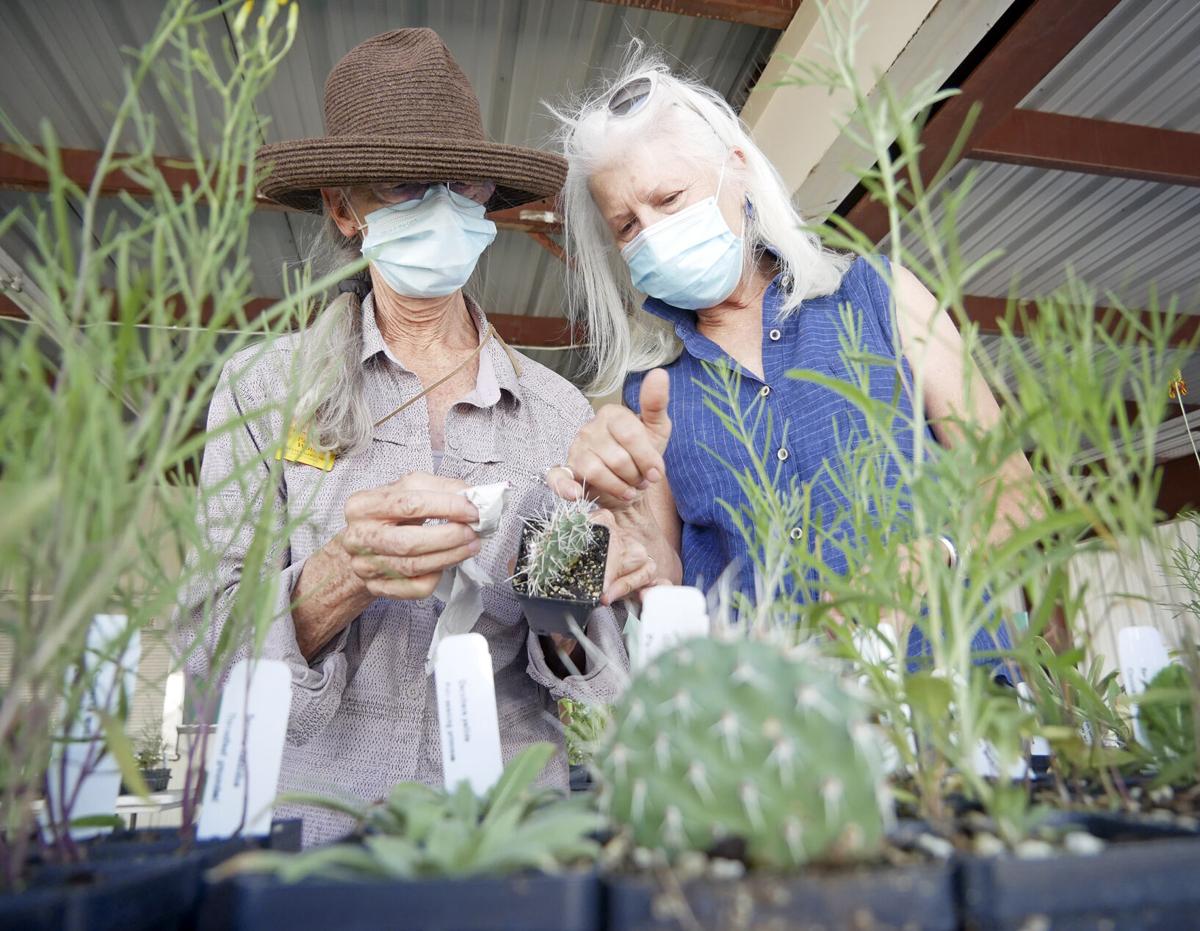 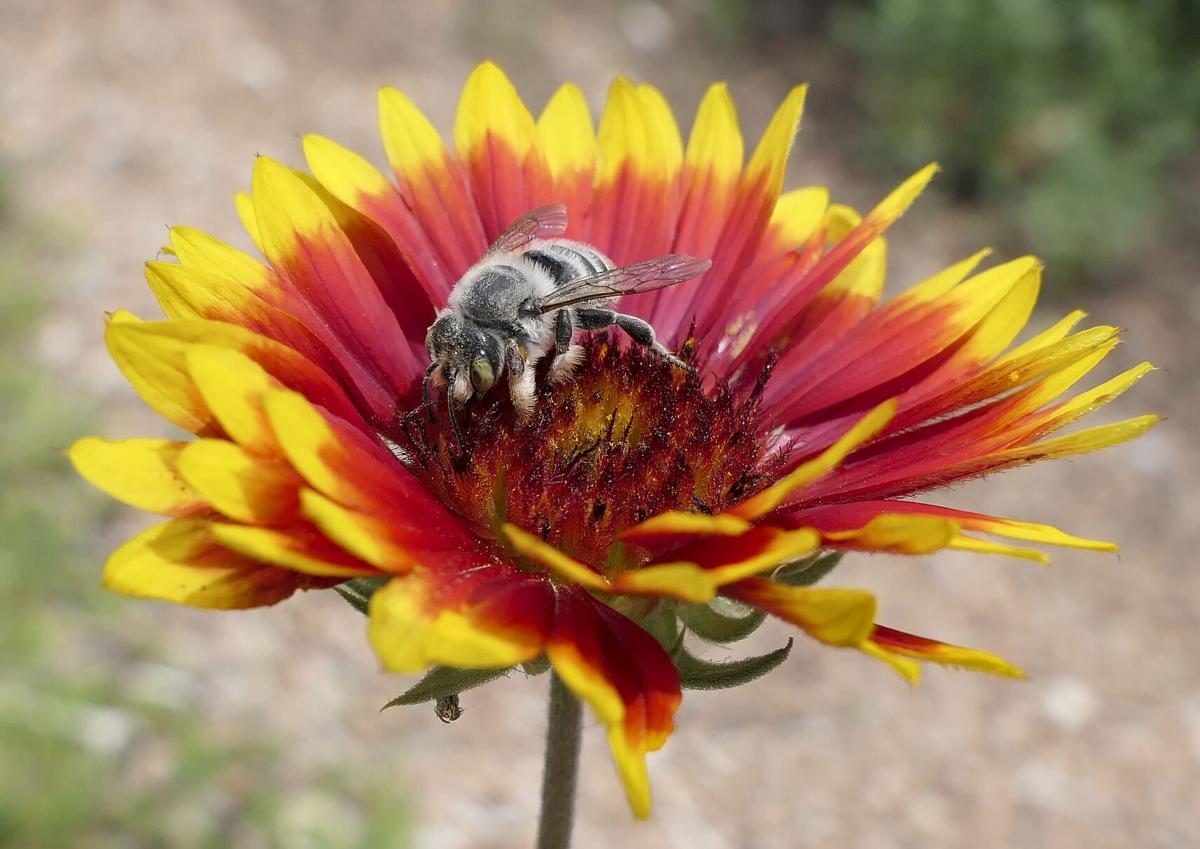 An Anthophora bee on a blanketflower (Gaillardia pulchella), which is one of the native species being distributed in pollinator habitat kits this weekend by the Xerces Society for Invertebrate Conservation. 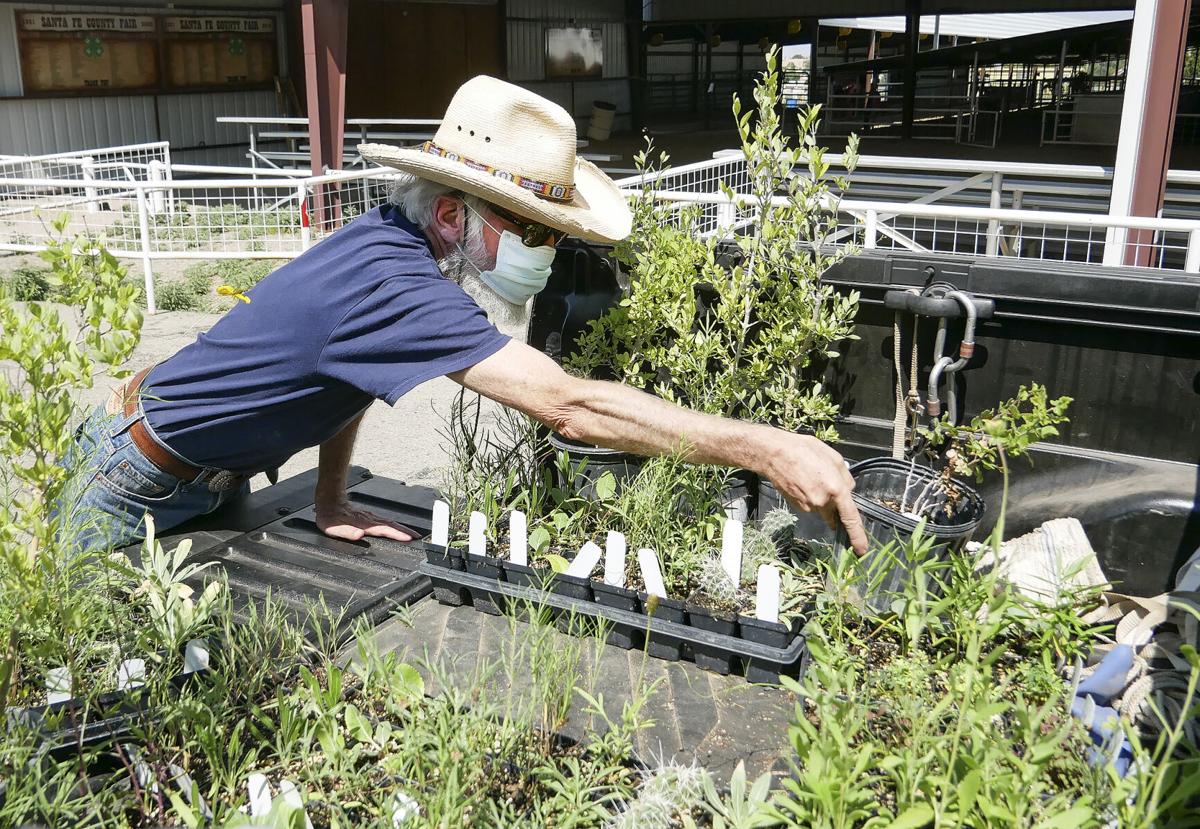 Bob Findling, with the Nature Conservancy, arranges plants in his truck bed after picking up habitat kits at the Xerces Society’s Pollinator Trail program distribution event at the Santa Fe County Fairgrounds on Friday afternoon. The nonprofit organization planned to distribute 11,550 plants this weekend. 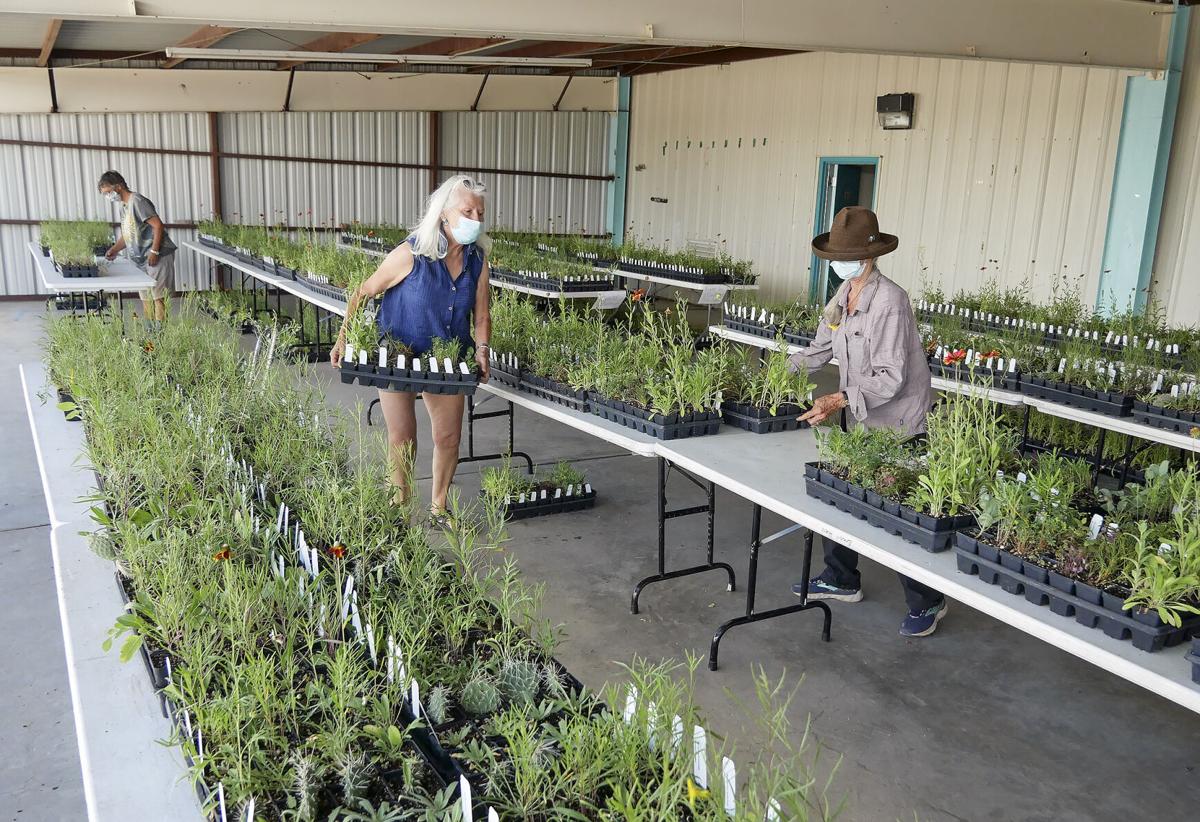 Linda Churchill, the head gardener at the Santa Fe Botanical Garden, was concerned about something she began noticing around the city earlier this year, as spring turned to summer.

Or rather, what she wasn’t noticing.

There were no aphids on the roses at the botanical garden. No bugs on windshields. No moths fluttering around lightbulbs in the evenings.

“People were saying, ‘Oh, it’s so nice. There are no bugs around.’ And I was saying, ‘Are you kidding?’ ” Churchill said.

“It felt just like the science fiction books about when the world ends,” she added. “People have been saying for years that when the insects go, we’re all going to go, and it felt like that this spring. It was really scary.”

Churchill said she saw insects start to reappear when the monsoon rains arrived and eased the extreme drought conditions that had plagued the region. But the scare she experienced drove home the importance of a new program she and the botanical garden are now taking part in.

This weekend, the Xerces Society for Invertebrate Conservation is distributing 11,550 native plants to residents and organizations throughout the city as part of its Santa Fe Pollinator Trail program. The aim of the project is to address habitat loss in the city by introducing new pockets of climate-resistant plants.

Pollinators such as bees, butterflies and moths have been in decline globally in recent decades. Climate change, habitat destruction and the improper use of pesticides are three of the most likely culprits, said Kaitlin Haase, Southwest pollinator conservation specialist for the Xerces Society.

Through the involvement of local residents and organizations, Haase hopes the pilot program raises awareness of the issue and helps people approach landscaping and gardening in a way that’s much more beneficial to pollinators than installing heat-trapping rock lawns.

“I know it’s kind of paralyzing to think about all the environmental problems in the world and climate change,” Haase said. “This is just one little thing that we can all do as a community, to be part of a movement to change our landscapes to be resilient with climate change and support not only pollinators, but birds and wildlife that depend on the plants that they pollinate.”

The Xerces Society purchased the plants for the program from the Santa Ana Native Plant Nursery, which is owned and operated by Santa Ana Pueblo and specializes in producing low-water, pesticide-free plants that are native to the Southwest.

With the help of volunteers from the Santa Fe Extension Master Gardeners, 350 kits of 33 small transplants will be handed out to about 230 residents and 20 organizations that have been selected to participate in the program.

The kits are being distributed this weekend at the Santa Fe County Fairgrounds at no cost to the participants, who have committed to establishing the plants in yards, gardens and public spaces.

There are two types of kits available. One is a low-water kit that includes plants such as pale evening primrose, plains prickly pear and blackfoot daisy. A low- to medium-water kit contains varieties such as Rocky Mountain penstemon, white prairie clover and blanketflower.

Haase said each kit has plants that bloom at different times of the year, allowing the small habitats to support pollinators that are active from spring through fall.

All the kits have been assigned to participants this year, but Haase said she plans to make the plant distribution an annual event.

The Santa Fe Botanical Garden is among the organizations that will be receiving kits this weekend. Others include the Santa Fe Children’s Museum, the Railyard Conservancy and the Randall Davey Audubon Center.

Churchill said the plants in the kits are not typical of what is found in most Santa Fe residents’ gardens, which commonly have compost mixed in to create a rich soil that’s frequently watered.

“Native plants want what’s there to begin with,” she said. “They don’t necessarily want a fertile soil.”

Adding pesticides is also a no-no.

Pam Wolfe is a Santa Fe Extension Master Gardener, meaning she’s been trained in horticulture by the New Mexico State University Cooperative Extension Service and shares her knowledge with the community.

She said pesticides tend to do more harm than good when it comes to pollinators.

“Oftentimes, these broad spectrum pesticides end up making things worse in the long run and repeated use tends to engender resistance in the target pests,” Wolfe said, “so they become less effective against the target and they wipe out a lot of the beneficials in the meantime.”

There are plenty of resources to help guide gardeners through the process of establishing their native plants.

The Xerces Society has posted webinars and sent out literature, and the Master Gardeners have an online form to answer any questions related to home gardening.

The Santa Fe Botanical Garden is also hosting a day dedicated to native plants and pollinators on Sept. 19 — Community Day on Museum Hill — with free admission to hear Haase and other experts speak on the subject.

Haase came to Santa Fe in May 2020 to establish a presence for the Xerces Society in the Southwest. She’s found the community to be ahead of the curve in terms of being friendly toward pollinators.

In June, Santa Fe was certified as a Bee City USA affiliate. An initiative of the Xerces Society, the designation means a city has committed to providing pollinators with healthy habitats free of pesticides and full of native plants.

With the Pollinator Trail program, Haase hopes to keep the momentum rolling.

“Santa Fe is really quite a dream to work with because there are so many people that really are concerned and care,” she said.

• To learn more about the Pollinator Trail program and find forms to participate next year, visit https://xerces.org/pollinator-conservation/habitat-kits/santa-fe.

I catch the water from my sink & bring to native plants outside giving them a little drink. Second use adds up bringing flowers.