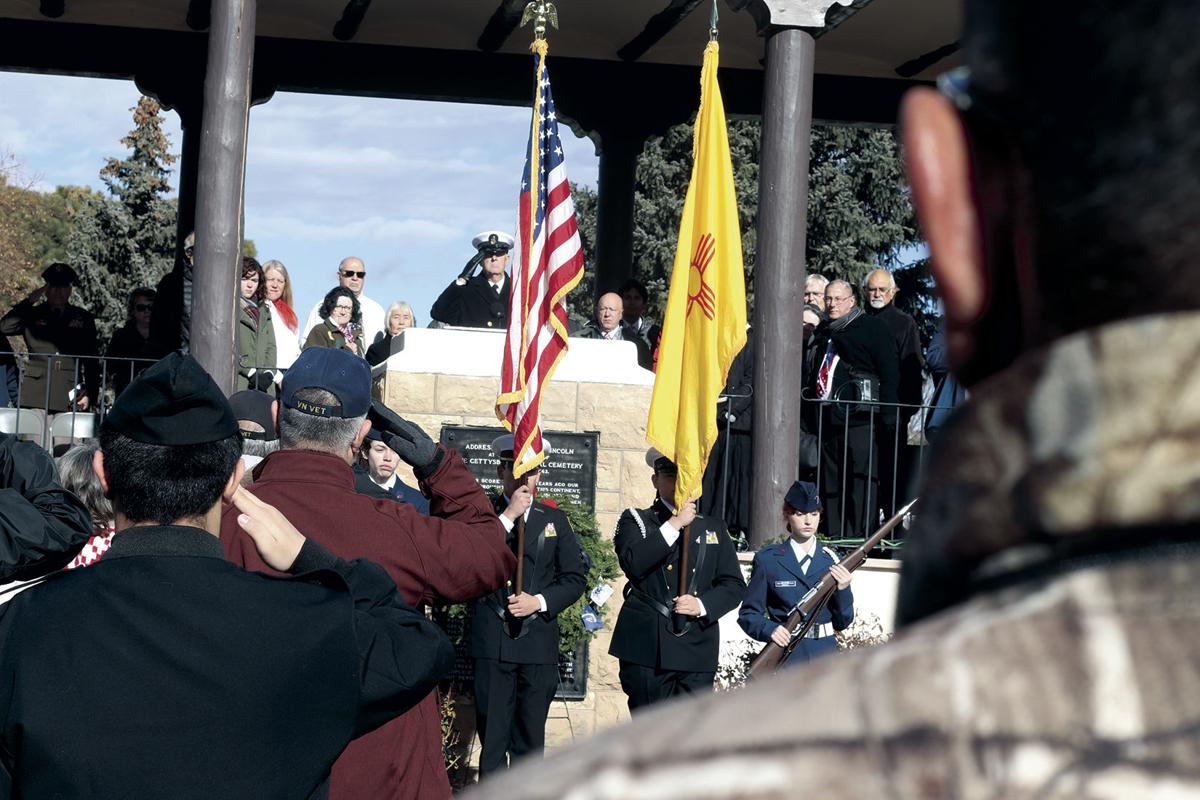 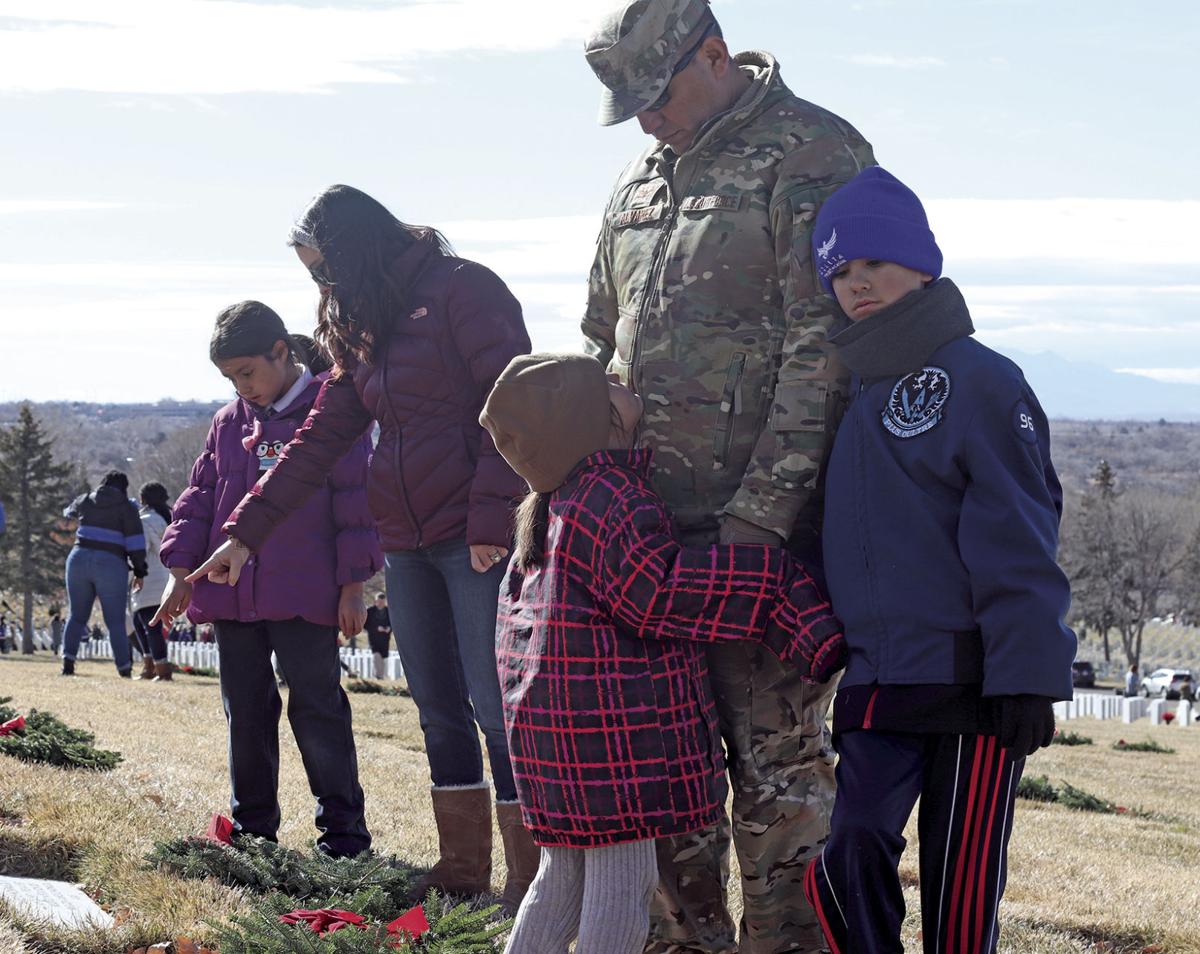 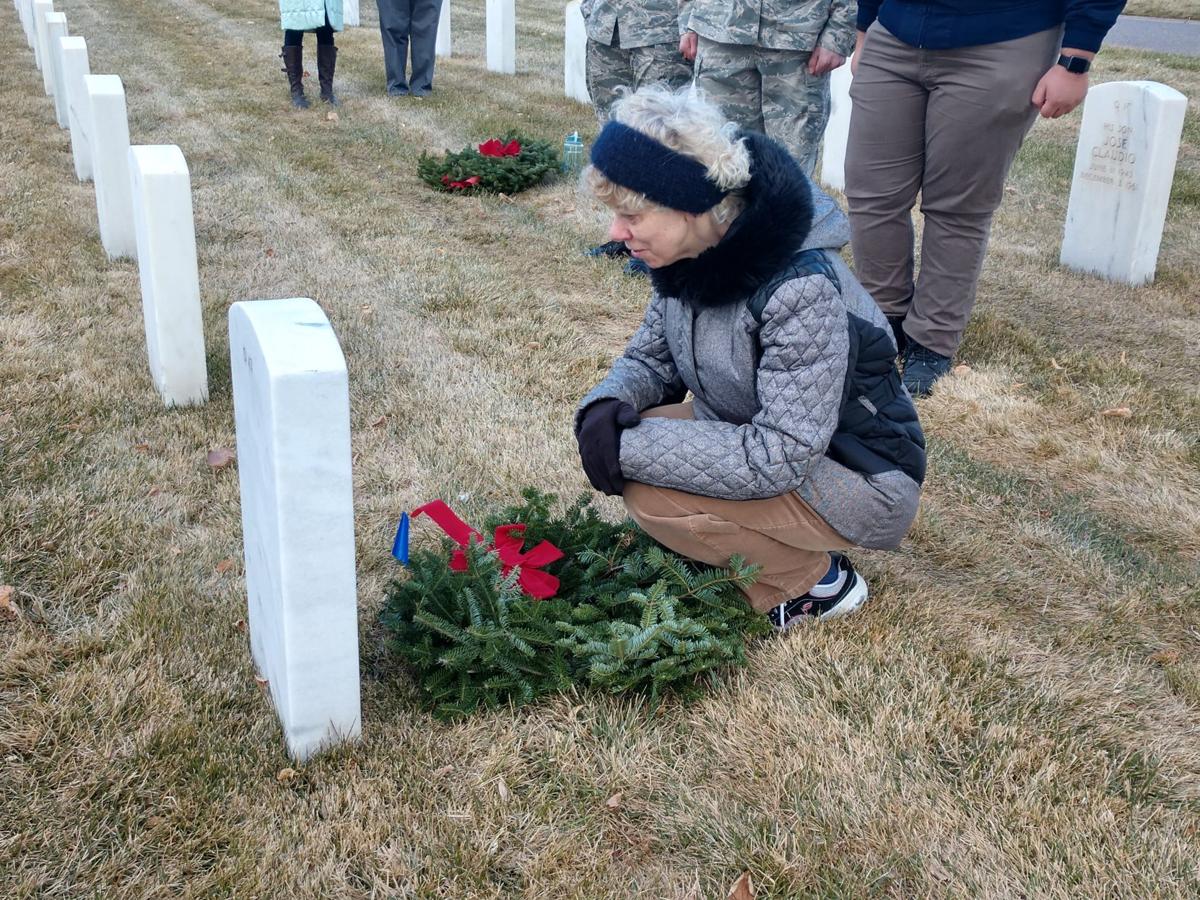 Sister Martha Trobik sponsored 100 wreaths at Santa Fe National Cemetery to honor the Navajo Code Talkers for Saturday's Wreaths Across America event. She placed a wreath for Marine Code Talker Pvt. Ralph Morgan. He was 18 when he died in World War II.

Sister Martha Trobik sponsored 100 wreaths at Santa Fe National Cemetery to honor the Navajo Code Talkers for Saturday's Wreaths Across America event. She placed a wreath for Marine Code Talker Pvt. Ralph Morgan. He was 18 when he died in World War II.

A few years ago, Sister Martha Torbik decided to volunteer for Wreaths Across America, an annual wreath-laying ceremony that honors veterans during the holiday season.

Her father, Bernard Torbik, served in the U.S. Army during World War II and was buried along with his wife at Arlington National Cemetery near Washington. Torbik couldn’t make the trip to Arlington, so she volunteered to place wreaths on veteran graves at a cemetery near her home in New York.

“At the same time I was placing wreaths in New York, I knew someone would be placing wreaths at the base of my parents’ [columbarium] niche in Arlington,” Torbik said in a recent interview with Wreaths Across America.

On Saturday, she paid it forward by traveling to Santa Fe National Cemetery to place wreaths on the graves of four Marines who served as Navajo Code Talkers during World War II. The men were assigned to battlefields in the Pacific and transmitted messages in a complex Navajo-based code that the Japanese never deciphered.

“This is an opportunity for me to do the same for someone else’s family,” said Torbik, who belongs to the Sisters of St. Francis of the Neumann Communities.

She was among hundreds of volunteers who placed more than 2,600 wreaths on the graves of service members during Saturday’s ceremony in Santa Fe.

“We want these holiday wreaths to symbolize our honor for those who served and are serving in our great nation and their families who endure sacrifices every day on their behalf,” said Chief Petty Officer Chuck Grosvenor, a Navy veteran and member of the Civil Air Patrol.

Danny Richardson served in the Navy for 15 years and grew up in New Mexico. While he doesn’t have any family buried in Santa Fe, he said he wanted to bring his children to the ceremony.

“We’re here to honor the sacrifice veterans made,” he said.

Lt. Col. Angie Slingluff of the Civil Air Patrol has coordinated the local event for the past four years.

“The Civil Air Patrol helps sponsor the national event across the country,” she said. “And that’s been the case here, but I’ve had a lot of help.”

Nicole Miller brought her daughters to visit their father’s grave. He was deployed to Afghanistan, Iraq and elsewhere while serving in the Air Force. She said he’d been medically discharged and died of complications in 2015.

Miller said she wanted to make sure her daughters — Sarah, 13, and Hailey, 10 — honored his sacrifice. Sarah held the wreath closer when she talked about giving it to her dad.

“I like visiting his grave because it reminds me of him,” she said. “I was really close to him.”

Several of the Daughters of the American Revolution were honored to meet and host Sister Martha in many of her activities during her visit to Santa Fe, and she couldn't say enough about our kind and generous community. WAA remembers our fallen and brings new friends together year after year all across the country on this extraordinary, wonderful day.