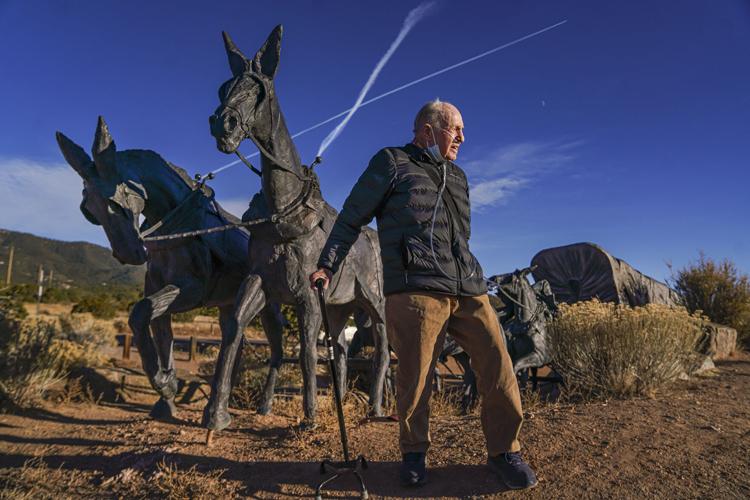 George Donoho Bayless looks out over the last miles of the Santa Fe Trail from the Journey's End monument Wednesday on Museum Hill. Bayless’ great-great-grandmother, Mary Dodson Donoho, is believed to be the first woman from back East to make the crossing. 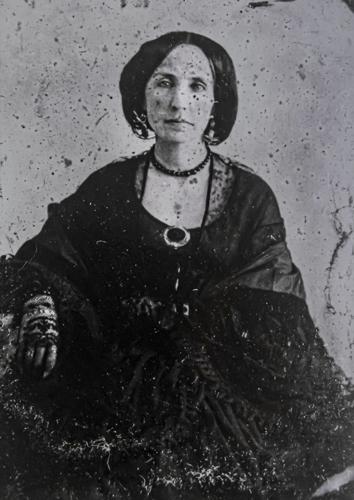 A picture of Mary Dodson Donoho. Historians believe she was one of the first, if not the first, Anglo woman to make it from Missouri to New Mexico on the Santa Fe Trail, setting aside a long-held belief the first lady of the trail was Susan Shelby Magoffin in 1846. 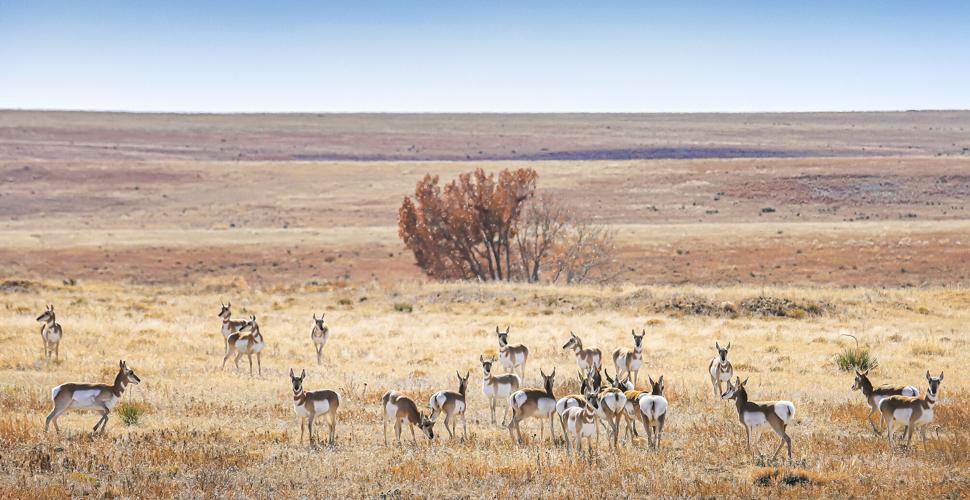 A herd of antelope grazes in the plains near the old Santa Fe Trail in early November. Among the women who left a diary while traveling the Santa Fe Trail was Susan Shelby Magoffin. In addition to daily life, Magoffin wrote about the scenery along the trail, including the open plains and herds of antelope that roamed them.

You could see the pride in George Donoho Bayless’ face as he surveyed the last two miles of the Santa Fe Trail.

His great-great-grandmother, Mary Dodson Donoho, likely traversed this piece of land in 1833. Historians believe she was one of the first, if not the first, Anglo woman to make it from Missouri to New Mexico, setting aside a long-held belief the first lady of the trail was Susan Shelby Magoffin in 1846.

From his perch next to the Journey’s End monument near Museum Hill, which depicts a wagon coming into Santa Fe on the trail, Bayless, 90, said he believes he knows what Donoho and the others in her caravan were thinking as they first saw the distinctive — and for Americans, unusual — adobe dwellings of their destination.

“They were exhilarated to be finding civilization, since they hadn’t seen anything like it since leaving Missouri,” he said. “She must have been excited — a new venture!”

Though Donoho may not have known it at the time, she represented a new power coming across the trail — a vanguard of wives, mothers and business operators. Their energy brought a familial force to the saga of westward expansion, merging with strong Hispanic and Native women who’d lived in New Mexico for many years.

For Mary Dodson Donaho, a new life in the West included opening a hotel at end of trail, which ended at what is now the Plaza. Historians say her hotel was somewhere near where La Fonda on the Plaza stands.

It also meant Donoho had survived the hardships of the trail — difficulties magnified for the few women who traveled it, usually in tandem with their merchant husbands. In her case, she was carrying a 9-month-old baby in her arms all the way.

Though several women who made the journey reflected on it in a positive way that suggested they embraced the adventure of it all, historians say there’s no way the hundreds of miles of hard, untamed country could have been easy, let alone fun.

“It’d be darn lonely and darn difficult,” said Santa Fe Trail historian Doug Hocking. “Just doing her business,” — in other words, going to the bathroom where there was no bathroom — “she had to get out of sight of the men, which put her in danger of Indians and wild animals.”

“No outhouses, no running water, and you needed to have water for everything — to cook, to clean, to wash clothes,” she said.

Christmas said it’s unlikely many of the caravans had doctors, complicating matters for women dealing with pregnancy issues — especially if there were no other women on the wagon train.

“And if your husband died on the trail, then what?” Christmas asked. “She would literally be at the mercy of another family or somebody to help her get across. And I suspect it was lonely. There’s something to the idea of guys talking to guys and women talking to women. Can you imagine [as a man] traveling 800 miles with a group of women for six weeks?”

It’s unclear just how Donoho, who was born in 1807 in Tennessee, actually fared on her 1833 trip with her husband, Missouri merchant William Donoho. Unlike other women who kept journals of their Santa Fe Trail travels, she left no known records.

Her biographer, the late Marian Meyer, uncovered Donoho’s ties to the trail after accidentally stumbling across an old New Mexican article about Donoho’s son James visiting Santa Fe in 1885. In that article, the son talked about his parents coming across the trail and setting up a hotel. Subsequent research confirmed Donoho made the 1833 trip.

Until that point, most historians generally agreed Magoffin was, as she noted in her memoirs, the first lady of the trail. She left a near-daily diary of her journey, sharing her observances of the customs of the trail and its challenges — inclement weather, mosquitoes, broken wheels and the profanity the men in her caravan used when dealing with oxen.

While she does not make the trip sound exactly like a lark, there’s also no real sense of depression or despair in her words, even when she suffered a miscarriage at Bent’s Fort in Colorado.

Meyer’s book Mary Donoho: New First Lady of the Santa Fe Trail portrays the Tennessean as one of a few pioneer women bold enough to take the trail in its early days, preceding the period of the late 1840s when, as the Santa Fe Republican reported in May 1848, “there are several American families on the road to this place. This is what we like to see and the time is not far distant when we shall see this country thickly settled by industrious and enterprising Americans.”

The Donohos traveled with a caravan of nearly 240 people, accompanied by a military escort. Meyers reports the wagon train came into Santa Fe in August 1833.

“They undoubtedly experienced mixed emotions,” Meyers writes. “There was probably relief at having arrived safely; curiosity and perhaps some apprehension about the life ahead of them. But assuredly there was exuberance.”

The late reporter, editor and historian R.L. Duffus described the Santa Fe of the time as “not much to look at. It was possible to be utterly disgusted with it at first sight, second sight and last sight. To enjoy it throughout one had to have a flair for such things … for some men, perhaps, it was an antidote for the smugness, hypocrisy and overfastidiousness they hated in the American civilization of their day.”

For the few women who undertook the trail, heading to the Southwest may have prompted fear, but also the hope they could not only “break the expected standards of the day but almost escape from them,” said trail historian Leo Oliva.

That so many of the women who did record their experiences spoke of it as “a great adventure” indicates some of them must have seen it as a freeing experience, he said — one that might have allowed them to more fully pursue business and cultural enterprises.

The Donohos ran their hotel in Santa Fe from 1833-37 on what is now the south half of the La Fonda property, Meyers writes. She notes the experience came in handy when the couple returned first to Missouri and then relocated to Clarksville, Texas, to open a hotel there.

They left Santa Fe in August 1837 in the wake of an uprising against Mexican Gov. Albino Peréz, who was decapitated.

“When they cut off his [Peréz’s] head, they decided it was a good time to go back to Missouri,” Bayless said with a chuckle.

Following the upheaval, William Donoho almost immediately played a role in rescuing a trio of women who had been taken captive by Native Americans. Though the women survived that ordeal, none lived much longer once they returned to their homes, Meyer reports.

“That was a real sad story,” Bayless said.

George Bayless, a U.S. Army veteran who worked in both the advertising and newsroom business, has lived in New Mexico since the mid-1990s. He never met Meyers, who wrote and published her book about his great-great-grandmother earlier in that decade. Nor did he know about Donoho’s fortitude until a relative read about it in Meyers’ book and then called him.

Asked what he would do if he could meet Mary Dodson Donoho — who died in 1880, the year the arrival of the railroad killed the trail — Bayless paused to contemplate an answer.

“I’d ask her, ‘Did you ever realize you became a leading historical figure in the southwestern United States?’ ” he said.

What: Historical reenactment of the arrival in Santa Fe on the Santa Fe Trail

Where: On the Santa Fe Plaza

A path to history: The Santa Fe Trail turns 200

Just as varied cultures in the city work to deal with their differences and conflicts today, European and Anglo newcomers sought to find a common ground with the Hispanos who lived in Santa Fe in 1821.

Column No. 200: It doesn't end with Old Pecos Trail