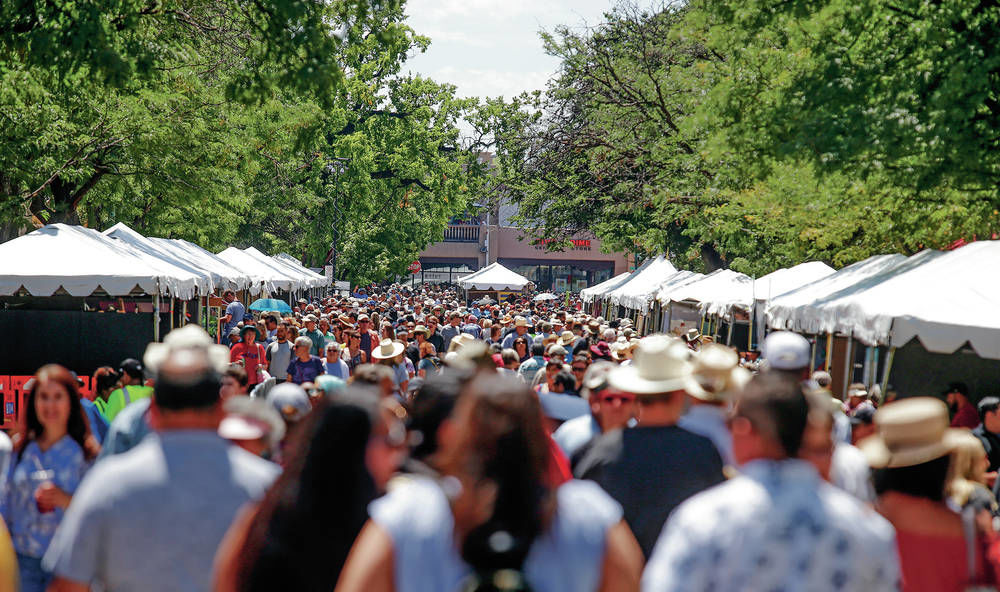 Thousands crowd Lincoln Avenue in August 2019 for the 98th annual Santa Fe Indian Market. Last year’s market was virtual; if this year’s is live again, it’s likely to look different than in years past. 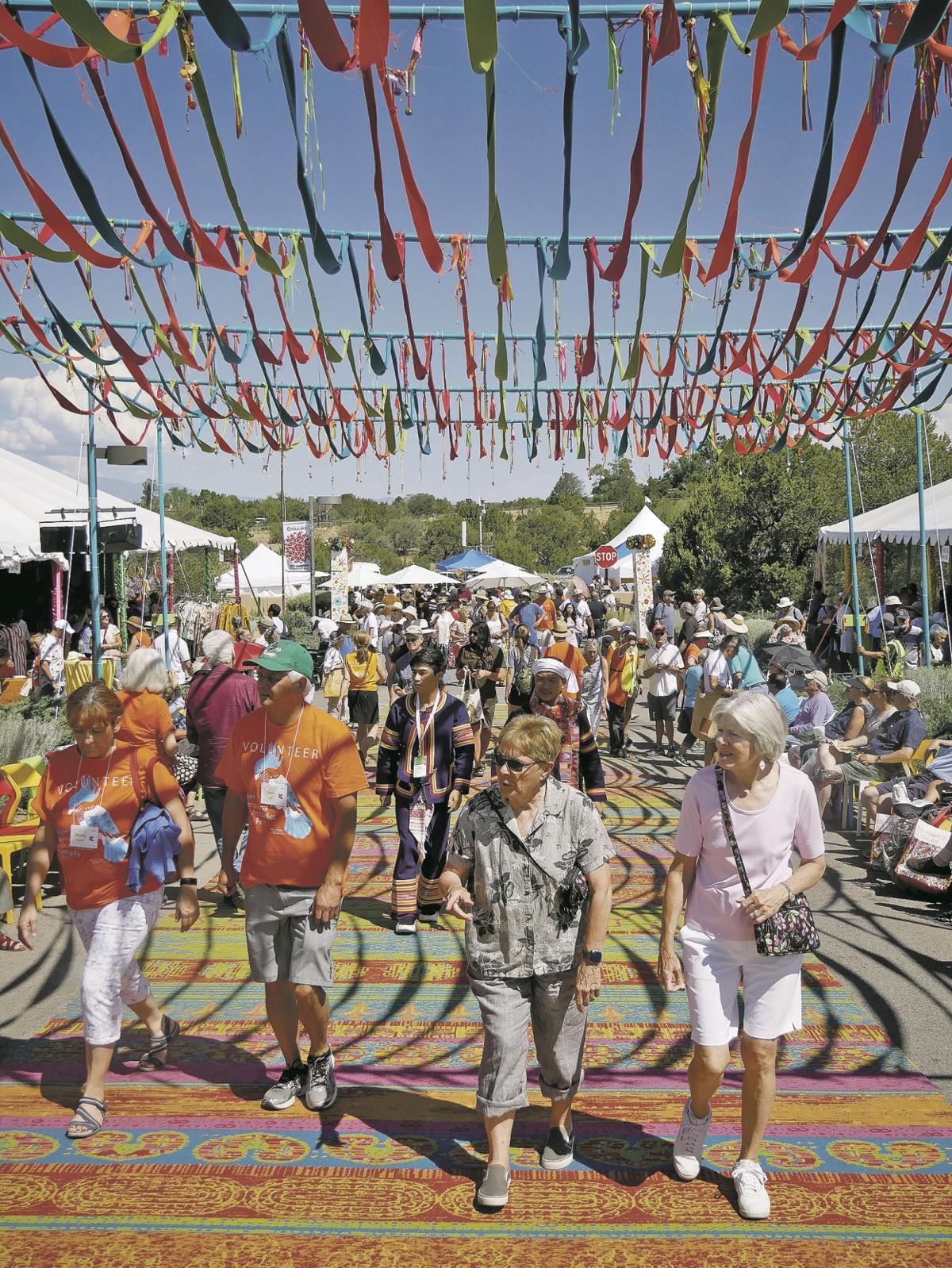 People walk through the decorative entrance into the International Folk Art Market in 2019. Last year’s market was canceled, but the organization plans for a live market to return this year with limits on crowd size.

Thousands crowd Lincoln Avenue in August 2019 for the 98th annual Santa Fe Indian Market. Last year’s market was virtual; if this year’s is live again, it’s likely to look different than in years past.

People walk through the decorative entrance into the International Folk Art Market in 2019. Last year’s market was canceled, but the organization plans for a live market to return this year with limits on crowd size.

Of course, that was in a world before the coronavirus pandemic, which leads to a question worth millions of dollars this year.

Will the city’s major markets — events that draw thousands of visitors — be live, virtual and/or not happen at all?

The answer, market officials say, rests with the pandemic and how it affects the state’s public health orders that dictate staging public events.

Large-scale markets with hundreds of vendors coming from around the world require varying amounts of advance notice. But many are making elaborate plans — some based on attendance, others on social distance — to handle whatever crowds are allowed. Santa Fe County currently has a mass gathering limit of 20 people.

The International Folk Art Market has a plan for a live market at two locations, with timed entries for 65 visitors and 15 artists for two-hour sessions — and more if the state allows. IFAM seeks a mass gathering limit of 100 people, CEO Stuart Ashman said.

The Traditional Spanish Market is not drawing a line for a mass gathering, said Jennifer Berkley, executive director of the Spanish Colonial Arts Society, which has staged the market since 1926.

“All we really need to know is what we are allowed to do, and we’ll work around that,” Berkley said. “We are committed to doing something live this year.”

The Spanish Market opted not to do a virtual market last year, unlike the online auctions and markets staged by IFAM and the Santa Fe Indian Market in 2020.

Indian Market is the largest of the summer events, normally with 700 vendors crowding the Plaza and surrounding streets and 230 volunteers keeping order. Kim Peone, executive director of the Southwestern Association for Indian Arts, which stages the event, said she weighs concerns beyond what the governor’s orders will allow.

“How do my staff feel about it?” Peone said. “How do my volunteers feel about it? The majority are 65 or older. There is the demographics of our artists, who have been the most impacted [by the coronavirus]. To me [the market] has to be a controlled environment. It may not look like it has looked in the past.”

The Plaza may be fenced off as other cities have done to create dedicated venues, she said.

“This is going to force the community to come together to support an effort like that,” Peone said. “It would be appropriate to say we have three or four game plans. We are looking at the financial perspective, the strategic perspective and the safety perspective. How are you going to strategize how you herd people in and out but you also have to give them the shopping experience?”

Peone said the number of visitors the event can hold may not be as critical as how to ensure safety.

“I don’t think it’s dictated by a number but dictated by a process,” she said, though she added outdoor markets should be able to proceed if skiing and outdoor dining are allowed.

“I’m actually hopeful,” Peone said. “Three weeks ago, I was not.”

The Indian Market last year offered its first virtual market to replace the canceled live market. The virtual market drew 450 of the 1,117 artists who were juried for the 2020 market. At the start, only 77 had a website, but by the end all had a dedicated internet presence.

The virtual market will return this summer, regardless of whether there is the traditional live market.

“It’s a hybrid between physical and virtual event,” Peone said.

“We are more flexible. Unlike the other markets, we have our own campus,” she said, referring to the Spanish Colonial Arts Society’s museum on 2½ acres on Museum Hill.

“Can we do a pop-up market on our site?” Berkley said. “Can we do something in our building? Can we partner with another organization, like El Rancho de las Golondrinas? We are hoping to have a market on the Plaza. It all depends on what the state regulations are.”

Berkley intends to have a live Traditional Spanish Market one way or another.

“If it’s not a one-off event and we do a number of events through the summer, we will do that, too,” she said.

The International Folk Art Market needs the most advance notice, as the bulk of its artist vendors come from far corners of the world and have to make travel arrangements and get government clearances. It was the first local market to publicly commit to a live 2021 market, contingent on favorable public health orders.

For now, the market plans to have artists at two locations: its Museum Hill venue and the International Folk Art Market Center parking lot at 620 Cerrillos Road.

“The question is, how many people can we have?” Ashman said. “That’s still to be determined. We have 97 artists that said they would come from 45 countries.”

IFAM had a four-day online auction last year. If the market goes online again this year, Ashman suspects the days would be the same as the scheduled July 7-18 live market.

“It might include direct sales instead of an auction,” he said.

The Santa Fe Opera is not a summer market, but plans to have more than 500 socially distanced patrons in the outdoor theater on a near-nightly basis.

As long as Santa Fe County can remain in COVID-19 levels turquoise, green or yellow, General Director Robert K. Meya said he intends to stage 30 performances of four operas with live audiences in July and August.

“We’re totally committed to having a season at 25 percent capacity,” Meya said. “We have been working very hard for nine months to mount a season without the usual ticket revenue.”

Meya anticipates bringing in only $2.5 million compared to the usual $10.5 million in ticket revenue. Much of 2020 was occupied with fundraising to cover the gap, he said.

The opera plans to sell tickets in pods of two, three, four, five or six people who want to sit together.

How individual operagoers will be seated has not yet been worked out, Meya said.

“We are not assigning seat locations now,” Meya said. “We are assigning a section.”

A computer at a later date will be used to arrange the pods with 6 feet of distance between each. Santa Fe Opera is more focused on the social-distance requirements than occupancy percentage, Meya said.

For now, the opera will stick to 25 percent theater occupancy rather than the 50 percent occupancy allowed under the green level that Santa Fe County achieved last week.

About one-third of the performances already have sections of the theater sold out. Of course, more tickets could become available later if social-distancing standards are loosened.

“That’s going to depend on how well we do as a state and county to keep our [COVID-19] numbers down and the success of our vaccination rates,” Meya said.

Attending the opera this summer will resemble going to the doctor or government office or anywhere else where you’re asked health questions and your temperature is taken.

“There will be some form of wellness check,” Meya said. “I think we will check cars as they come into the parking lot.”

And tailgating? The cherished tradition will be allowed, with more details to be released in May.

“We have an upper and lower parking lot,” Meya hinted. “We’re exploring something interesting.”

Location: The Plaza, possibly with a fence

Location: The Plaza or alternative location