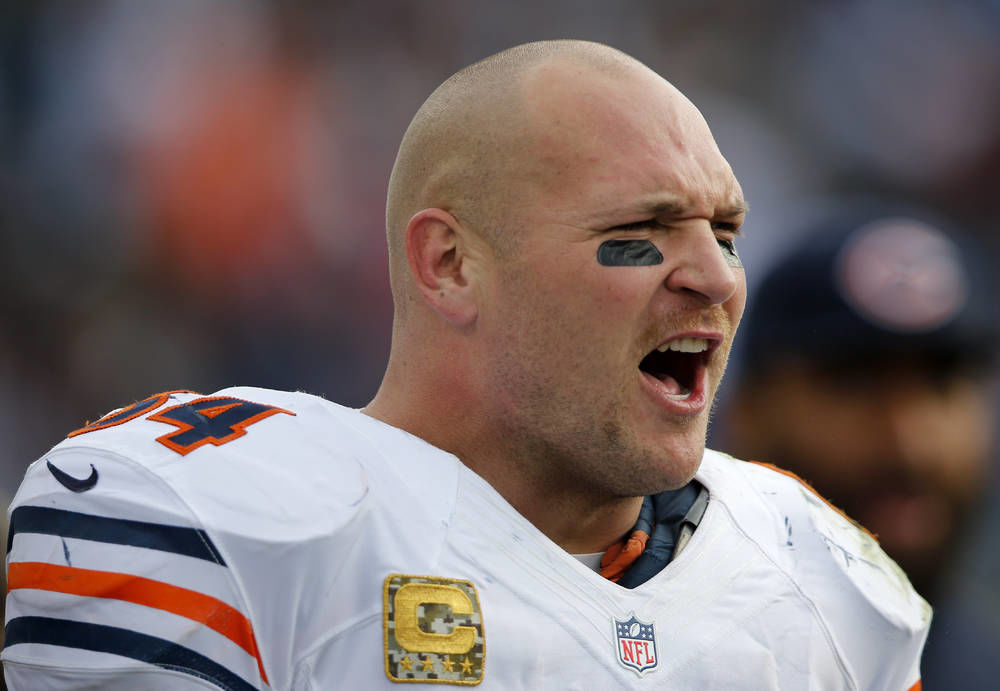 Then-Chicago Bears middle linebacker Brian Urlacher yells while watching from the bench in during a game against the Tennessee Titans in 2012 in Nashville, Tenn. Associated Press file photo

Let’s face a fact as cold as the winds of December. College football has far more to do with show business and big business than it does with education.

Ohio State, Clemson, Alabama and a few other powerhouses are rich in cash and rabid followers. On the homefront, there is nothing entertaining about the University of New Mexico’s football team. It doesn’t win and it doesn’t draw customers.

But UNM’s administration insists on maintaining a football team at the Division I level, highest in the collegiate ranks. It just ushered out a coach with a long and checkered résumé.

In his place, the school needs a charismatic figure with a name that prospective recruits know as well as their own. Only one person fits the description.

Brian Urlacher, the modern-day monster of the Midway, can revive a moribund program in the Southwest.

Urlacher, lightly recruited out of Lovington High School, blossomed at UNM. Then he played 13 seasons as a linebacker for the Chicago Bears and was voted into the Pro Football Hall of Fame on the first ballot in 2018.

He looked like a real-life Mr. Clean, his shaved head making him the most recognizable and publicized Bears player of the last 20 years.

Urlacher has said in recent years he has no interest in coaching, but that should not stop UNM from pursuing him. What’s to lose? The school needs star power, and Urlacher is the only person with close ties to the Lobos who has it.

His presence would sell tickets and resurrect interest in a program that has become irrelevant. With Urlacher, UNM would have a building block.

Still, I can hear the doubters with their questions.

Can Urlacher coach? Of course he can. Having played at the highest level, he knows as much about football as any other potential candidate. It’s not like he dozed in the film room. No player excels in the pros without meticulous preparation.

But recruiting is pivotal in college. Would he be able to land players?

Urlacher would be a better closer than UNM has had in decades. Players and especially their parents would know him from his success in the NFL. They would welcome the opportunity to hear his pitch.

The last question, though, is the tough one. Could Urlacher be coaxed into taking a job that would require endless hours and just as many headaches?

Probably not. As an elite NFL player who performed in the third-largest market, he has his pick of business opportunities.

The only reason he might consider coaching the UNM football team is that it was his gateway to fame. Sometimes great players are willing to return to the college that gave them an opportunity, even if the job isn’t a good one.

Forrest Gregg resigned as head coach of the Green Bay Packers to go back to his school, Southern Methodist University. And SMU at the time was even more downtrodden than New Mexico.

Urlacher wouldn’t be stepping into so big a mess. Nonetheless, the New Mexico team he would inherit can’t compete with the likes of Wyoming or the Air Force Academy, places where recruiting is more difficult than at UNM.

Urlacher would strengthen the program immediately by the sheer force of his reputation. Curiosity would compel many to follow the Lobos for the first time. I’ve lived in New Mexico for eight years, but never seen the Lobos play in person. Urlacher would motivate me to buy tickets.

Those who contend UNM needs an experienced hand, that no coaching novice can get the job done, are ignoring history.

The best coach UNM ever had was Marv Levy. Just 32 when he was elevated from assistant to head coach in 1958, he led the Lobos for two seasons. Levy’s teams finished 7-3 each time.

A Harvard graduate who could connect with players, Levy became a hot property. The University of California hired him to turn around its slumbering Bears. He failed at Cal, winning just 11 of 40 games in four seasons.

Levy rehabilitated his career and eventually became the head coach of two teams in the NFL. He reached and lost four consecutive Super Bowls with the Buffalo Bills. Like Urlacher and Gregg, Levy is in the Pro Football Hall of Fame.

A street is named for Levy in Chicago, his hometown. Urlacher can expect to see his name on a Windy City boulevard or maybe a bridge.

He should have the keys to the campus in Albuquerque. If UNM wants to continue in showbiz, it needs a leading man.

Ringside Seat is an opinion column about people, politics and news. Contact Milan Simonich at msimonich@sfnewmexican.com or 505-490-1048.

Nuñez said he has reached out to former head coaches Rocky Long and Dennis Franchione, as well as former Lobo star and pro football Hall of Famer Brian Urlacher to get their insight on what they feel the program needs most.

Can we get Marv Levy back?

Sure, sure, why not? He would be an abject failure, but that is what the Lobos are used to, and at least the fans would be happy to have him on the sidelines. Win-win.