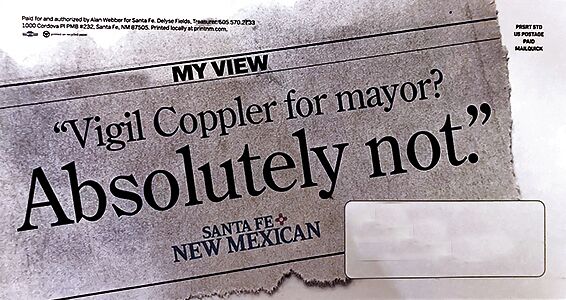 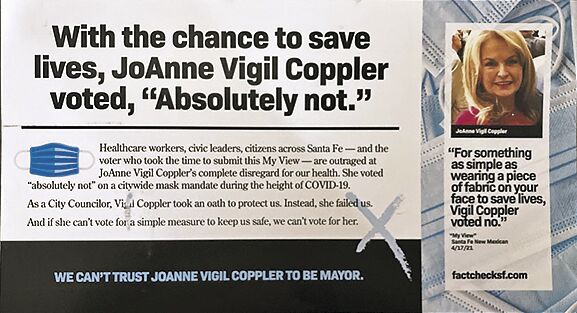 A mailer with The New Mexican logo that Webber campaign sent out.

A mailer with The New Mexican logo that Webber campaign sent out.

The Santa Fe New Mexican on Friday asked Mayor Alan Webber’s campaign to stop sending a mailer with its logo that left some voters with the impression the newspaper has taken a stance against his chief rival in the upcoming city election.

The front side of the glossy mailer, which was sent to several thousand voters earlier this week, is emblazoned with a headline unflattering to City Councilor JoAnne Vigil Coppler: “Vigil Coppler for mayor? Absolutely not.”

The newspaper’s familiar logo is featured on the mailer underneath the headline, which originated from an opinion piece published in the “My View” section of the newspaper’s editorial pages in April. The piece was written by a nurse who criticized Vigil Coppler for voting “absolutely not” in June 2020 on a citywide mask mandate.

The back of the mailer quotes from the opinion piece but doesn’t explicitly identify the author. It also states, among other things, “Healthcare workers, civic leaders, citizens across Santa Fe — and the voter who took the time to submit this My View — are outraged at JoAnne Vigil Coppler’s complete disregard for our health.”

“Our attorney’s belief is that you can quote The New Mexican and even identify it in text as a source, but I think our concern is the logo,” he said.

For others, Casaus said, the concern might be the mailer “has the opportunity to imply to the reader that that’s The New Mexican‘s viewpoint on Ms. Vigil Coppler, and we haven’t endorsed in this race.”

The local nurse who wrote the opinion piece did not return a call to comment on its appearance in a campaign mailer.

Sascha Anderson, Webber’s campaign spokeswoman, wrote in an email the campaign didn’t intend to leave voters with the wrong impression.

“We simply used the exact headline of the My View that was published in the New Mexican and took great pains to ensure that this quote was from a My View guest op-ed, and not an editorial from the New Mexican,” she wrote. “The campaign seeks to educate voters about Vigil Coppler’s vote against the City’s mask ordinance because we feel that if you vote no on something as simple as a mask ordinance you are not qualified to be Mayor.”

Vigil Coppler said the mayor’s campaign is using the newspaper “for a bit of sensationalism.”

“What part of ‘I’m not against masks’ do they not understand?” she said, adding she wears one “religiously.”

Vigil Coppler reiterated she voted against the mask ordinance because it was a “poorly written measure” that “had so many loopholes” and unenforceable provisions. For example, she said, the law allowed police to issue violators a written warning for a first offense. Vigil Coppler said the ordinance didn’t address how police would know whether someone had received a prior warning and that repeat violators wouldn’t admit to previous offenses to avoid a fine.

“I worked in the judiciary … and I thought it was important for us to have legislation that’s going to be enforceable. Otherwise, it’s just window dressing,” she said.

“Instead of Alan Webber running on his own dismal record, he deliberately attempts to distort my City Council testimony on the mask legislation,” Vigil Coppler added.

Anderson said Webber’s campaign would stop sending the mailer to voters. “And we will not use the New Mexican logo going forward,” she wrote.

She declined to disclose how much money the campaign spent on the mailer, writing the expense “will be on our next financial report.”

The mailer was designed by the campaign’s communications team and approved by Webber, Anderson wrote. It did not undergo a legal review beforehand, she added.

“It is pretty standard to quote articles and My View pieces in political mail and use the logo of the publication,” she wrote. “Other candidates have done this in the past as well.”

Asked whether the campaign made it abundantly clear the material came from a reader opinion, Anderson wrote the headline quotes the exact headline from the “My View.”

“We took pains to enlarge the ‘My View’ portion so it was clear that this headline was not an editorial, but a guest editorial from the paper’s ‘My View’ section,” she wrote. “The mailer indicates it’s a quote from a ‘My View’ on the front and again makes it clear on the back that the quote is from a My View author that was published in the New Mexican.”

But former City Councilor Karen Heldmeyer said it takes a sophisticated voter to know the difference.

“When I’ve seen it done before by campaigns, it’s done intentionally by the campaigns,” she said.

“The Webber campaign is supposedly a very organized campaign, a very professional campaign, and I can’t see that being done just inadvertently,” she added.

Heldmeyer said she heard from “a number of people who were really very upset” about the mailer.

George Johnson, a journalist and author who has been commenting on the mayoral race in his online publication, The Santa Fe Review, wrote about Webber’s mailer Friday. He called it a “campaign attack ad misrepresenting his opponent’s vote on the mask ordinance.”

“A reader taking the time to parse the histrionic text on back might figure out that the opinion is from a single letter to the editor, one that was published back in April, but many people will be left with the impression that the city’s leading newspaper has called for his opponent’s defeat,” Johnson wrote. “I don’t think we’ve seen this kind of tactic since the sleazy Santa Fe Grass Roots campaigns of 2004, which prompted me to begin writing The Santa Fe Review. I would have expected the mayor to hold himself to a higher standard.”

But Johnson wrote Vigil Coppler “seems no better in that regard.”

At the end of a recent debate, he wrote, Vigil Coppler “slammed Mr. Webber with a hit-and-run act of verbal sabotage: an accusation that in a fit of pique he had insulted her with a crude remark. The incident was more than a year and a half ago and there were no witnesses. My vote won’t hinge on that any more than it will on the Councilor’s mask vote.”

Casaus said the mailer won’t affect the newspaper’s coverage of the mayoral race.

“All companies need to protect their trademark, their brand, because it belongs to them and not anyone else,” he said.

The Mayor just voluntarily reached down onto $^%*@# mud and rubbed it on himself. Don't know if it was stupid or if it was slimy.

Stupid ? or Slimy? Who knows? What a choice for a leader.

Maybe I haven't listened enough to the Mayor, but his accent doesn't seem as bad as Schumer's. Having spent 10 years on Lawn Guyland, I got used to that.

This deceptive and misleading flyer clearly shows who Webber and his cabal really are. Let’s vote him out of office!

I'm dumbfounded at the stupidity of this move. Wasn't Webber a newspaper guy and didn't he launch a major magazine? And so don't you think he would know better than to let this kind of thing out? So much for the "competent" leadership he tries to convey. Please please people of SFe, vote for JVC or whoever else it takes to launch this nincompoop from office.

Really ugly comment, using a regional accent to suggest that a respected doctor is like a child sex trafficker. Is that the best you have to say?

I'd been leaning away from Vigil-Coppler, but I'm again so disgusted by Webber's slick-and-slide that V-C is looking better.

Tempest in a teapot. If you read the New Mexican, you know that My View columns are private citizens and politicos who get to voice their own opinions. Maybe we should not discount voters as being too dumb to figure it out. We definitely need better civic classes and maybe some of you could contribute so the New Mexican will be available to school-aged children in the classroom. An educated electorate is what we need.

Tempest in a teapot? Completely disagree.

The public should expect that the Mayor of the City of Santa Fe in an honest and ethical manner. This ill advised stunt shows that he is not capable of that.

But I am surprised at, Stefanie, that you take every opportunity to launch a very subtle, passive aggressive attack on Councilor JoAnne Vigil Coppler.

Quite frankly I would have to say that you’ve taken on the role of the Webber apologist in chief for this election in the New Mexican’s comment section. It’s a shame, Stefanie. It’s a shame because you claim to be this enlightened, reasonable woman. I have yet to see any evidence of that.

Dennis, remember she spends her life making sure her neighbor knows who owns the wall between them in an aggressive harassing way even to the point of wasting valuable court time that could be used on criminals, not much reason there.

Dennis, you are so right!

I agree with you, Stefanie, that people should think when they see the ad. That said, those lurid political ads are meant to make a person emotional, not analytical. Mayor Webber's campaign should have made it crystal clear that it was not the newspaper's position, such as by adding the author's name.

The mailer seems like a sleazy underhanded attempt to mislead voters. Fortunately, many people who bother to vote will realize what is going on by a close study of the mailer, and/or by reading The New Mexican. The use of the logo does not seem like trademark infringement to me because Weber is not in the business of selling newspapers and is not trying to pass off his newspaper as The New Mexican. Nor is he trying to pass off his mailer as coming from The New Mexican. The mailer does not need the logo to be effective. It could have used the words "The Santa Fe New Mexican" instead of the logo for its nefarious purpose.