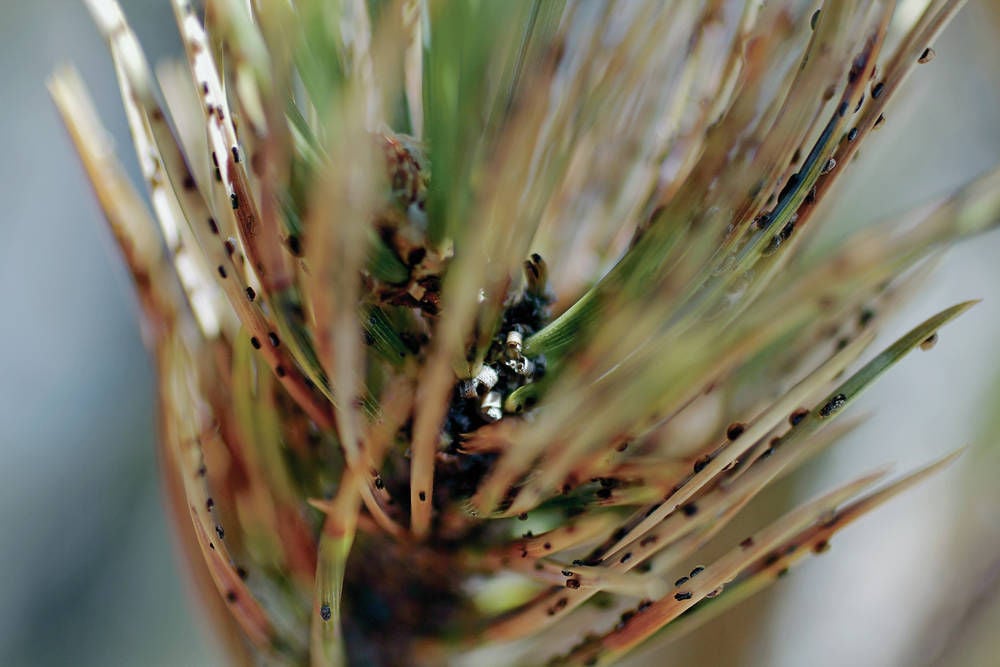 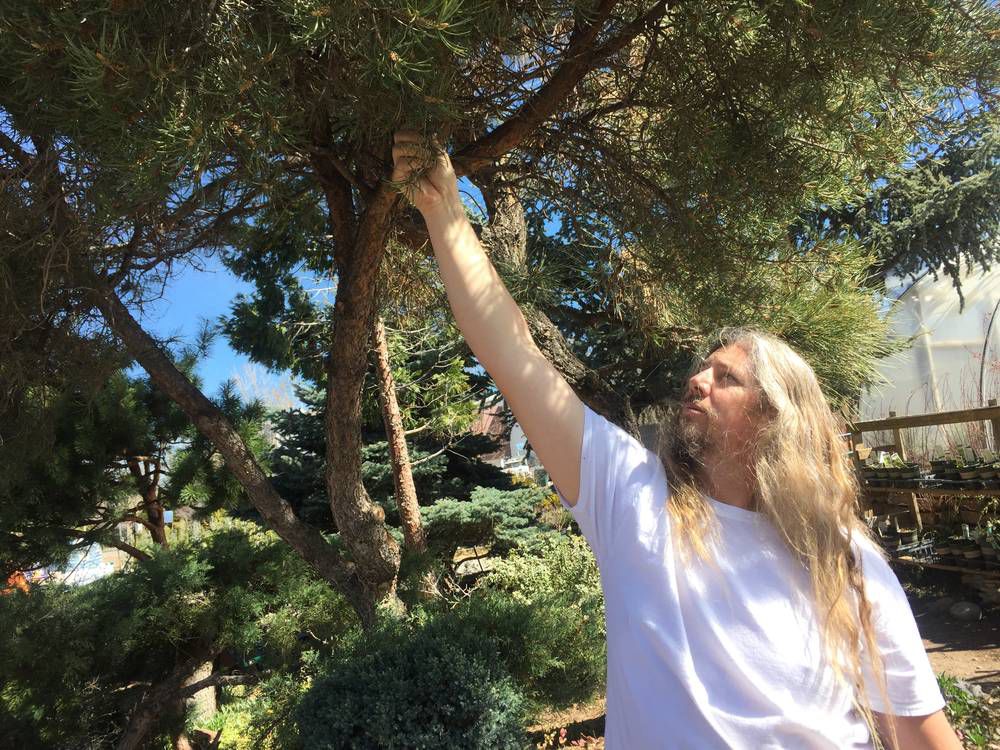 Mark Pennington examines a tree infested with piñon needle scale at Agua Fria Nursery. ‘It’s definitely getting worse with a lack of winter cold and a lack of winter moisture,’ he says of the infestation. Rebecca Moss/The New Mexican 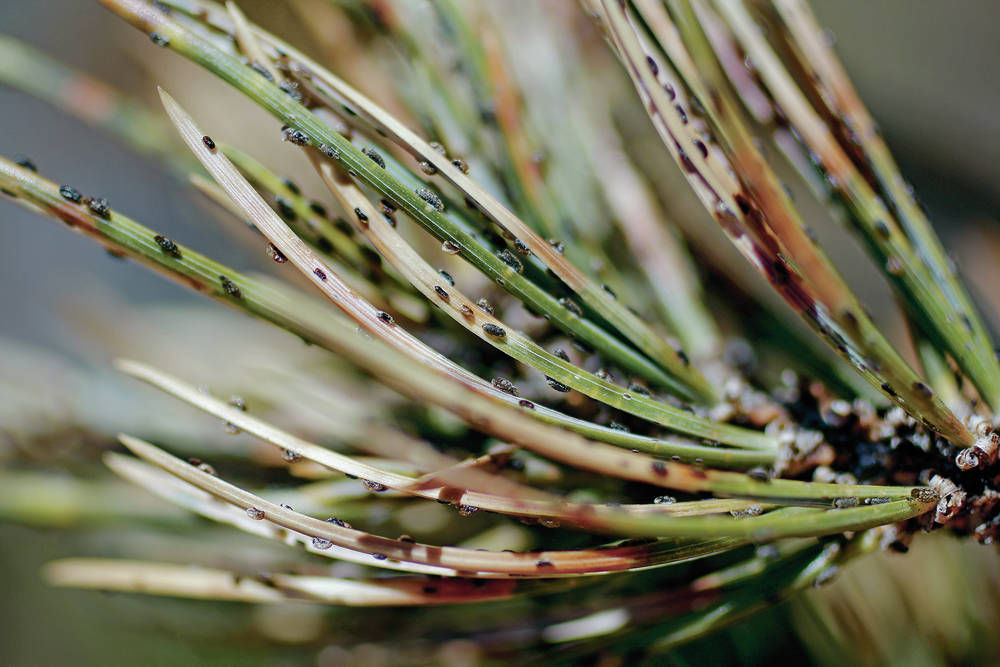 Mark Pennington examines a tree infested with piñon needle scale at Agua Fria Nursery. ‘It’s definitely getting worse with a lack of winter cold and a lack of winter moisture,’ he says of the infestation. Rebecca Moss/The New Mexican

Black gnats swarmed at the base of an old, gnarled piñon tree. Many of its dark green needles had been drained of their color and pliancy and were pocked by tens of microscopic bugs. Brittle and tan, the needles broke easily between Mark Pennington’s fingers.

Pennington said he noticed the first signs of the piñon needle scale infestation last week and since has been spraying the old tree at the Agua Fria Nursery with water and a horticultural oil called dormant, trying to kill off the new generation of the scale before it can reproduce.

The piñon — the official state tree, known for its nuts and its distinctive aroma as firewood — is under attack again in Santa Fe because of New Mexico’s warming and drying climate, which can leave the tree vulnerable to bug infestation. It isn’t yet known how severe the problem may become.

“If the weather continues to be warmer and drier, everything we are used to seeing here is going to change,” he said.

State scientists and local botanists say a number of signs indicate piñons in Northern New Mexico and other areas of the state are under increasing strain this year.

“Pine needle scale is all over Santa Fe,” said Scott Canning, director of horticulture for the Santa Fe Botanical Garden. “Last year, it was widespread; this year it is even more widespread,” he said.

Canning said pine needle scale goes after trees that are stressed from inadequate water or drastic fluctuations in temperature. “Our climate is warmer and drier than it was; certainly that is not up for debate,” he said.

The last incident of dramatic piñon die-off happened in 2013, when ips beetles attacked the trees during an extended period of drought, killing off millions of trees and leaving the brittle remains to become a widespread fire hazard. In 2002, the bark beetle preyed on drought-weakened piñons, decimating larger numbers of trees in Northern New Mexico and leaving wide gaps in tree cover along the foothills.

Canning said the best way to prevent scale from developing is to water piñons monthly during drought; if an infestation is in progress, he agreed that Pennington’s method — to routinely spray a tree with water or smother it with dormant oil — is the best way to kill off the bugs.

“The scale has been here; it is a not a newly introduced pest,” Canning said. “But right now, the conditions seem to be right for it spreading widely across Santa Fe.”

The first three months of 2017 are on track to be the third-warmest start of any year on record for Santa Fe and Albuquerque, according to meteorologist Randall Hergert with the National Weather Service in Albuquerque. He said forecasts for the coming months point to higher-than-average temperatures and drier conditions, which can lead to evaporation of snowpack, diminishing the amount of runoff and impacting vegetation.

“New Mexico is not in any abnormally dry c0ondition [now], but that is likely to change,” he said.

Driving through the foothills of Santa Fe, the piñons are highlighted in a flaxen hue, as if they’ve been tanned by the sun in uneven clumps. Up close, many are dotted with the black scale females eating away at the sap in the pine needles; the males are winged. When they mate, they coat the piñon bark in white film, like dryer lint. But that won’t be visible until later this spring.

The yellowing of the needles is the result of die-off created by infestation last year, which also saw a low-moisture spring season. It is also indicative of a pattern, said Carol Sutherland, an entomologist at New Mexico State University.

Cold years can snuff out piñon needle scale and other insidious bugs, but in warmer years, they are more likely to thrive, she said.

“We have fooled ourselves, to some degree, with thinking native plants can’t be stressed in a native environment,” she said. “But when that environment changes from what is considered normal, those plants can be stressed.”

While the trees can survive on between 6 and 8 inches of water, parts of the state have consistently received less than 3 inches annually.

She says a tree can recover from a single year of premature needle drop (when the piñon needles fall in the spring instead of the fall) but year after year, the trees lose their ability to grow new needles and become more susceptible to disease and insect infestation.

A study published in 2015 and conducted in part by scientists at Los Alamos National Laboratory found that an increasingly warm and dry climate in the Southwest, consistent with global warming, would lead to widespread piñon and juniper tree death in New Mexico by 2050 and could entirely wipe out the population by 2100.

“We have had long periods of drought that have taken its toll over time,” Goldberg said. “Whether or not that is part of a larger change in the ecosystem, I am not really qualified to say.”