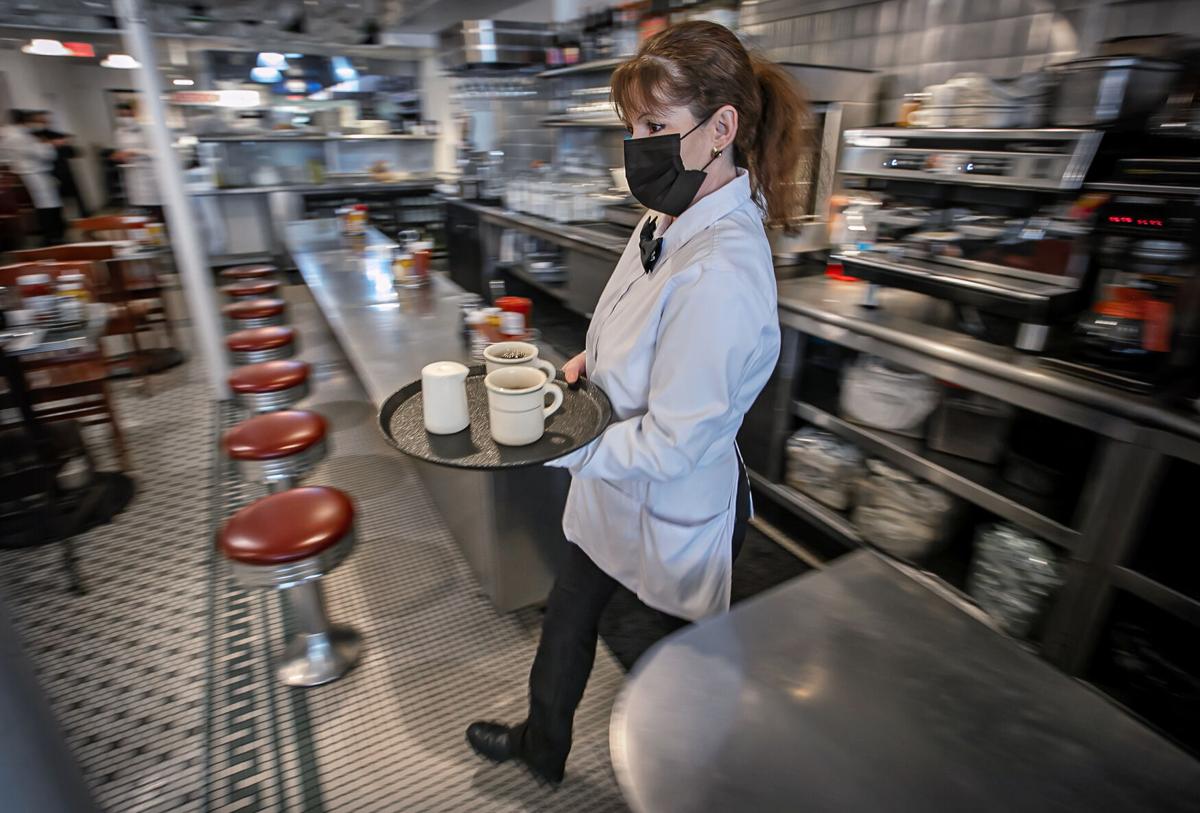 Ester Najarro works the morning shift Thursday at the Plaza Cafe, where she has been a server for 40 years. The downtown cafe, she said, is her second home, full of people who are like members of a second family. 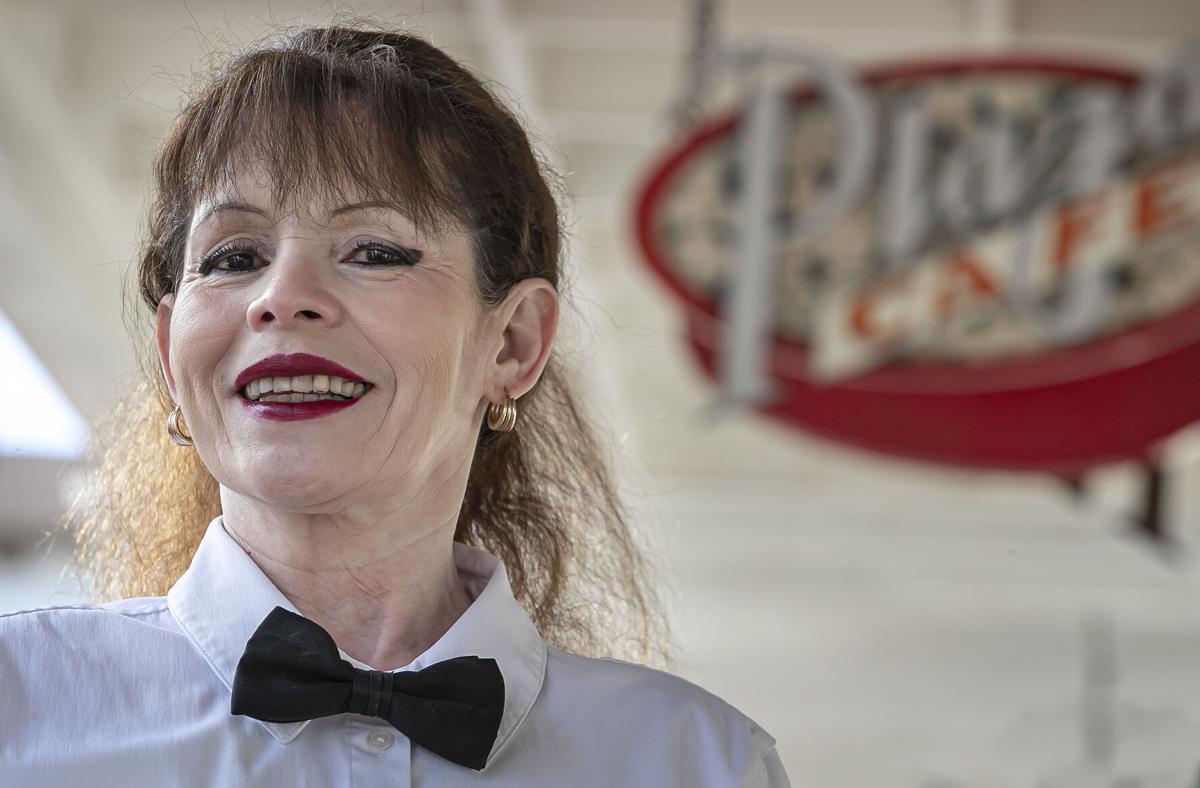 Ester Najarro at the Plaza Cafe on Thursday. General manager Andrew Razatos said about Najarro, ‘We’ve always appreciated her tenacity, honesty, hard work and most of all, her love and dedication to the family business.’

The magic moment arrived when Ester Najarro was dressed as a witch in her favorite place.

It was Halloween 2000, in the Plaza Cafe, where Najarro was working as a server, when her boyfriend of three years, Mario Escobedo, popped the question.

“Will you marry me?” he asked, offering her a ring. She put it on her finger and ran crying into the kitchen, happy as any witch could be.

The cooks there were less impressed. “Be nice to him or he’ll take the ring back,” one of them told her.

She was, and he didn’t: Najarro still proudly displays the ring, and she has been happily wed to Escobedo for over 20 years.

Her marriage to the Plaza Cafe has lasted twice as long: 40 years come Monday.

Several online career-focused websites report the average tenure for a restaurant server is one to two years. Najarro’s tenure at the Plaza is man-bites-dog unusual. And as she’s gone about her work for four decades, it’s fair to say she has become as much of a fixture of Santa Fe as the cafe itself.

“She makes me feel at home every time I come in,” said Santa Fe resident Lena Keslin, who stopped in one recent morning for breakfast. “You don’t get to come in without a big hug from her.”

She noted it’s unusual to see an employee stay with a job so long. But Najarro, she said, is like “the patrona of the place.”

The Guatemala-born Najarro left most of her family members behind when she moved to Santa Fe and the United States in 1981, when she was a young teen. Her homeland was reeling from the effects of a lengthy civil war, one that prompted a military coup one year after Najarro migrated to the U.S. with an older cousin.

Upon her arrival in town, she began working for the Plaza Cafe, where her cousin had found a job busing tables. It was difficult at first because she did not know how to speak, read or understand English. Her efforts to take an English language class at Santa Fe Community College went nowhere as the instructor kept speaking mostly in Spanish, she said.

She learned English slowly, on the job, between clearing and wiping down tables.

Within five years, she became a server.

The customer, a New Yorker, wasn’t too happy, but when she apologized and told him she was “so scared” about making a mistake, he was forgiving. And he eventually got the burger — this time, it wasn’t rare — the way he wanted it.

The downtown cafe, she said, is her second home, full of people who are like members of a second family. She’s been the subject of some recruiting efforts by other restaurants, “but I would never leave the Plaza,” she said.

She loves her customers and is accustomed to having to explain to newcomers the difference between red and green chile — a distinction she thinks is important because the Plaza Cafe chile can be spicy, she said. And when she asks customers, “Red or green or Christmas?” she often adds: “Christmas in New Mexico is all the time, every day,” when it comes to the state’s most-beloved food.

Her customers, she said, must come first, as she tells new servers she trains. There are certain protocols to follow when dealing with them: understand their needs; help them understand the menu choices; never let a bad day affect your professional demeanor.

“Your life is your private life,” she said. If she’s having a bad day and wants to cry, “I go to the bathroom and cry and clean my eyes, and it’s like nothing happened. The customer doesn’t need to know if there’s something wrong.”

New server Rose Evans, who was working her first day under Najarro’s guidance Tuesday, called her trainer “a good teacher. It’s exciting to learn from someone who is so immersed in the culture of the restaurant and been a part of it for so long. She knows the family who owns it, she’s seen it go through several iterations and she knows everyone.”

Citing a quote from the Dalai Lama — “The roots of all goodness lie in the soil of an appreciation for goodness” — general manager Andrew Razatos said Najarro is “the Plaza Cafe’s goodness.” He said she has worked at the restaurant through three generations of his family’s ownership of the place.

“We’ve always appreciated her tenacity, honesty, hard work and most of all, her love and dedication to the family business,” he said.

Over time, Najarro earned her citizenship and was able to bring her parents and 10 siblings to the U.S., where they are all doing well, she said.

She and her husband, who is a tile setter, have two teenage children who attend Santa Fe High School.

While Najarro says she loves her job, she wants her children to pursue a different career.

She said she plans to stay at the restaurant until the day she can no longer wait tables. In the interim, she’s become something of a local celebrity for those who frequent the cafe, which opened on the Plaza well over a century ago.

She’s not one to tell funny stories about her experiences at the restaurant. But she broke into spontaneous laughter as she recalled how customers who had not walked into the cafe for years, or even decades, reacted when they saw her.

Ester’s hard work and dedication are inspirational. Her presence at Plaza Cafe is always comforting, like all is right with the world. After having breakfast at Plaza many hundreds of times, one memory sticks out. After five or six years ago there was a scheduling mixup and Ester was the only waitperson on duty that morning. As the cafe filled up, Ester ran the whole dining room by herself, doing the work of maybe half a dozen people while waiting for reinforcements. Most mortals would have been crushed by all that, but not Ester. What a superstar!

Esther was my waitress for 35 years until we needed to relocate. I miss her, the food, the other employees and the Razatos family. Lots of good memories at the Plaza Cafe.

Great story. And a nice reminder how much our Immigrant population adds to the greatness of our country.

Mr Robert Nott: Waking up to waitress in the headlines shouldn’t be startling but it is.

A waiter/ess is someone who comes to your table and literally waits on you; they stand there and take your order. A server serves you; they may bring your meal….

Your stories are great and we do appreciate your research and writing.

What a great human interest story.