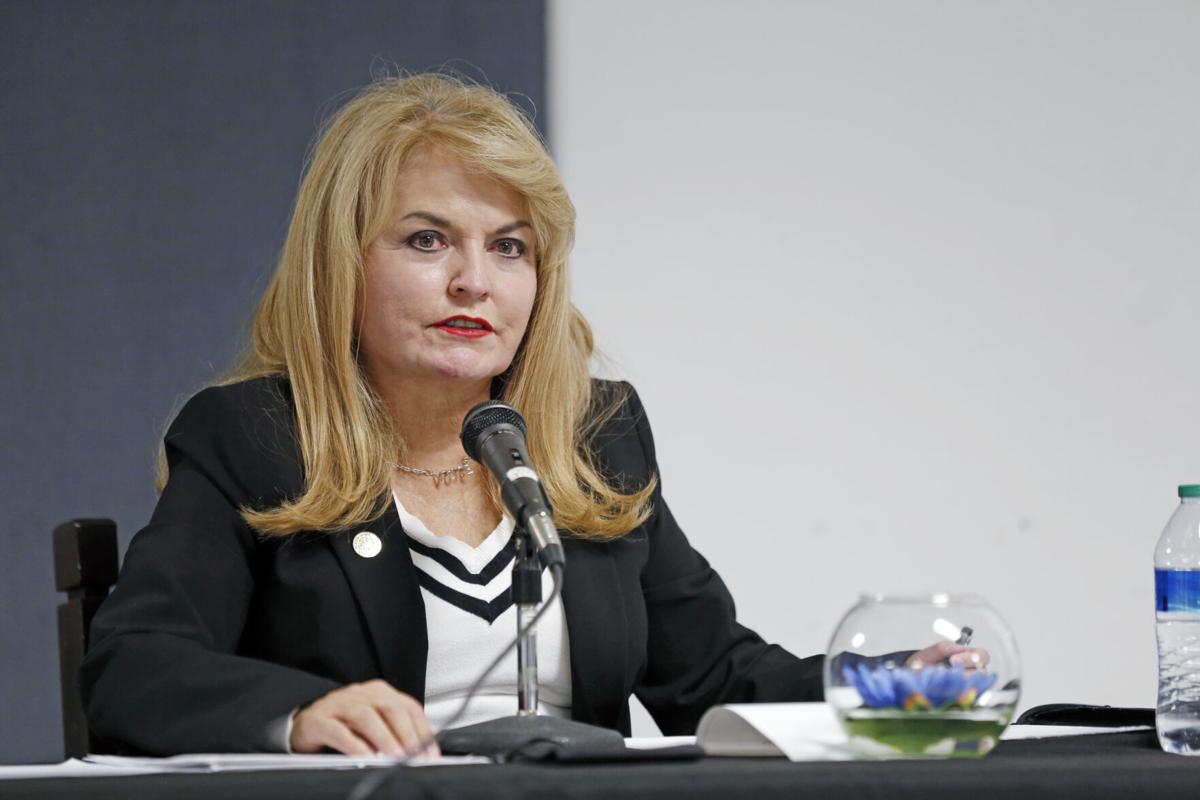 City Councilor JoAnne Vigil Coppler takes part in a mayoral candidate forum this month at the Fraternal Order of Police lodge. Vigil Coppler, who has questioned the health of the city’s recent fiscal audit, says her resignation as the city’s personnel director in 1982 was unrelated to financial audits. 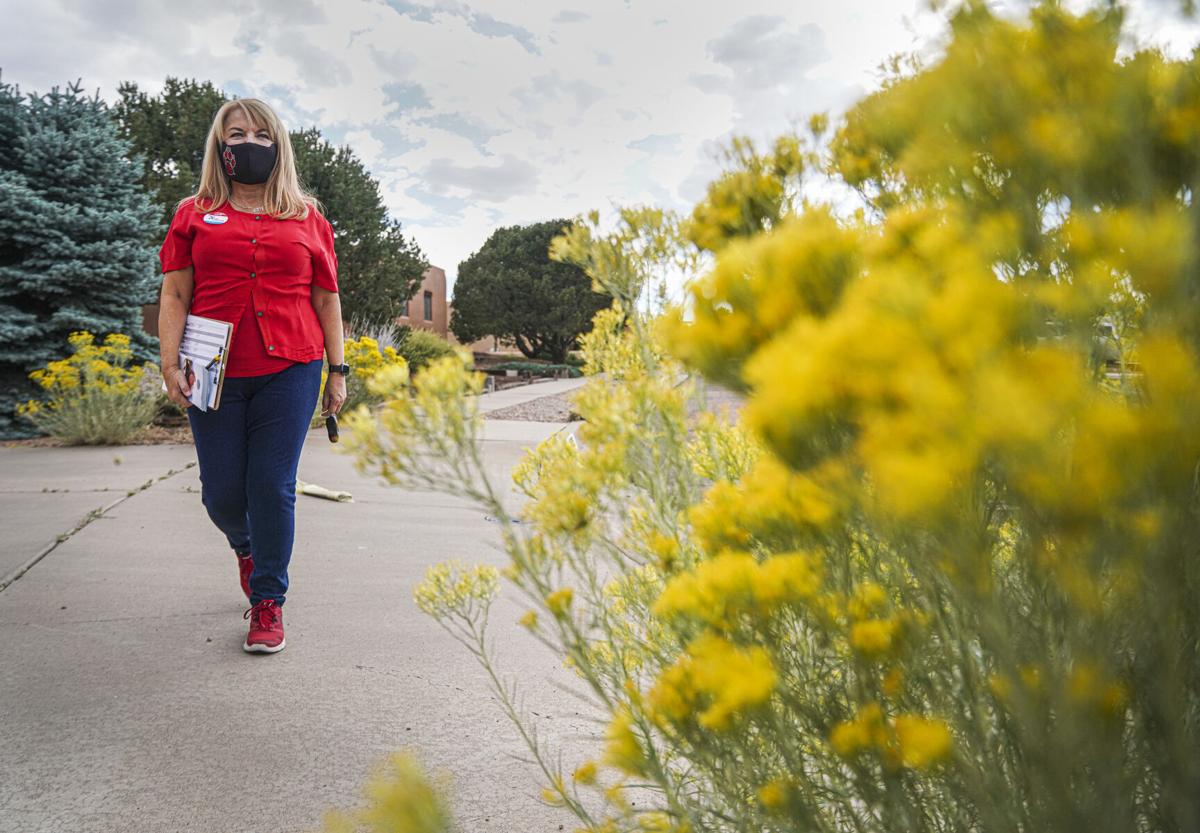 City Councilor JoAnne Vigil Coppler takes part in a mayoral candidate forum this month at the Fraternal Order of Police lodge. Vigil Coppler, who has questioned the health of the city’s recent fiscal audit, says her resignation as the city’s personnel director in 1982 was unrelated to financial audits.

One of mayoral candidate JoAnne Vigil Coppler’s primary targets as she attempts to unseat Mayor Alan Webber has been the health of the city’s recent fiscal audit.

“When you have late audits, you are really behind in the information and this money, you need to be accountable,” Vigil Coppler said at a recent candidate forum.

The recent discussion about city audits likely will be on voters’ minds with the Nov. 2 election nearing.

Both the fiscal year 1980-81 and 1981-82 audits during her stint as personnel director contained qualified opinions, which the investment website Investopedia describes as a situation in which an auditor determines there is a material issue with accounting policies but it’s not one that misrepresents financial facts.

The audits’ findings included payroll changes being implemented prior to obtaining the signature of a department supervisor.

The audits, conducted by Downey & Sisneros, CPAs, also recommended individual departments take responsibility to check payroll to make sure that paychecks were not issued to nonexistent employees and that proper compensation was being provided to employees based on the compensation scale.

According to a resignation letter sent to then-City Manager Jerry Manzagol, Vigil Coppler, then going by JoAnne Vigil, wrote she regretted the city manager and the mayor felt her resignation was a “necessary action.”

Vigil Coppler said she wasn’t asked to resign and denied her resignation had anything to do with the findings of the audit.

“It was an exempt position,” she said Wednesday. “I am not going to sit around and wait for anything to happen. I fully understand how exempt positions work.”

Sisto Abeyta, Vigil Coppler’s campaign manager, said Vigil Coppler had “no physical impact on the budgets or the audits or anything else, other than processing paperwork.”

Similarly, Cody Peluso, communication director for Vigil Coppler’s campaign, wrote in an email that payroll operations were in the Finance Department, which Vigil Coppler had no authority over, and not the Human Resources Department.

“Holding the current administration to high standards simply because JoAnne Vigil Coppler was an employee for a previous administration is far from hypocritical,” Peluso wrote.

“The problems under this mayor have been severe, reoccurring and unresolved, plain and simple,” he later said.

Fred Lopez, city controller from 1982-95, said that during his tenure the city was running a “pretty tight ship.”

“She really didn’t have anything to do with finances,” he said. “We made sure of that. We are the finance directors; we did the budget.”

Lopez added that the state Department of Finance and Administration oversaw Santa Fe finances for a time prior to 1981 due to issues that arose in the late 1970s.

“I remember it distinctly because I was offered the job in 1981, and I turned it down because I saw the mess,” he said.

He said he accepted the position in 1982 after being persuaded by a colleague.

“I just want to be clear that there was no shenanigans going on in payroll during my period,” Lopez said. “What happened before and after, what the hell can I do?”

Vigil Coppler’s explanation of her departure seemed to be corroborated Wednesday by Manzagol, who said he didn’t remember Vigil Coppler’s resignation letter but that he believed the reason she resigned stemmed from an administration change.

Around the time the letter was sent, then-Mayor Louis R. Montaño, who died in 2008, was starting his four-year term and Manzagol believed Montaño was looking to fill what he considered a key position with “someone else” he preferred.

The now-84-year-old Manzagol said he didn’t think the resignation had anything to do with poor performance on Vigil Coppler’s part.

Vigil Coppler would return to the city from 1991-94 as human resources director under Mayor Sam Pick. In those audits, findings cited were related to overtime and compensatory pay, including some instances in which overtime was paid at an incorrect rate.

In a statement, Sandra Wechsler, campaign manager for Webber’s campaign, said the audits raised “serious questions” about Vigil Coppler’s time at the city, questioning the validity of campaign statements made by the candidate.

“JoAnne is clearly lying about her record,” Wechsler wrote. “She has said on several occasions that when she worked at the City, she had ‘perfect audits.’ These records definitely tell a different story.”

Vigil Coppler has touted her background in city and state government, especially her human resources/personnel stints.

Prior to retiring as court director/clerk for the First Judicial District Court, she also worked as a human resources director for the city of Santa Fe, Los Alamos County, and the state Taxation and Revenue Department. She also served on the transition teams for two New Mexico governors.

Wechsler wrote that Webber, who has highlighted his background in business, has had nothing but “clean” audits based on the lack of “significant findings” and no “fiscal management” issues — a stance that has drawn criticism from Vigil Coppler’s camp.

The most recent audit, which was submitted by the accounting firm CliftonLarsonAllen almost a year late, carried an “unmodified” finding and had in total 21 findings, including issues with reporting for federal grants and improper accounting procedures.

When asked if it was fair to characterize the audit as “clean,” Wechsler wrote in an email that a “clean audit” is still possible with findings.

According to Investopedia, an “unqualified opinion” essentially means a “clean audit.”

The report found 10 “significant” findings and eight “material” deficiencies, the most serious of findings.

The proverbial October surprise. When you wrestle with a pig, everybody gets muddy.

Sure, V-C, whatever you say (eye roll)

LOL. Kettle calling the pot black. And V-C's supporters seem like those of the former guy who blow off any sign that their preferred candidate is far from perfect and highly unlikely to protect neighborhoods from rampant growth.

The New Mexican is clearly digging desperately for dirt if they have to go back 30-40 years to find something to complain about JVC. Why, when we can go back only months to find dirt on Webber? Resigning from an exempt job after a mayoral change is standard stuff. Webber didn't have any administrative experience in government and it shows. He shown extremely poor judgment by prioritizing cultural issues over basic bread and butter issues of the city's residents - besides the folks who look just like him on the east side.

Wechsler has the right job. She sure can spin. Webber had a "clean" audit - that's clean in quotes. Everybody's trying to spin what a clean audit is. Does it really matter what a clean audit is if that audit was so poorly done - and almost a year late - that the City is in danger of losing federal funding? Twenty-one findings is horrendous. The person who should resign is Webber's Finance Department director and Webber should've resigned after the fiasco on the plaza.

I so appreciate how this article speaks to the depth of Joanne’s long professional work experience, particularly in Human Resources. With our city workers’ morale at an absolute all time low, we need a change in leadership that creates an enjoyable and respectful workplace. A positive culture shift will return to our community both improved productivity/services and the ability to recruit and retain talented employees. All of Santa Fe is disappointed in the failure of our city services, the low morale of city staff, and escalating racial tensions. Joanne has the long professional experience our city needs right now to guide our city forward and create a positive and respectful city and workplace for all Santa Fe residents.

How pathetic can you get? Webber’s campaign has to go back 39 years in a feeble attempt to dig up dirt on Coppler. And they still couldn’t find anything. So now they are trying to gaslight us into believing that there is some sort of scandal. (Man, you can just smell the desperation). You know, if Webber and his team of overpaid and underqualified financial wizzes had spent half as much time and effort on the audits as they did in trying to dig up or manufacture dirt on Coppler, they might have actually turned them in on time and earned clean audits.

IMO Next Webber will find JVC didn't wear the right shoes for her prom dress in 1971. Webber is showing his underbelly to try and salvage a terrible 4 years by deflecting. Gaslighting is what Webber does best.

Who is Jay Baker, again, Richard? All the mud was coming from Webber’s opponents and Webber didn’t write this report, did he? Do you know what gaslighting is?

It would be nice for Vigil Coppler to fully disclose why she resigned after a questionable audit, wouldn’t it? Wouldn’t you like to hear her explanation? Non-existing employees and off scale pay on Vigil Coppler’s watch? For shame.

A very interesting read. So Vigil Coppler has a bit of baggage. Surprise.

Haha- so she has a dusty old carry-on bag vs Webber's three 200lb steamer trunks. Your point?