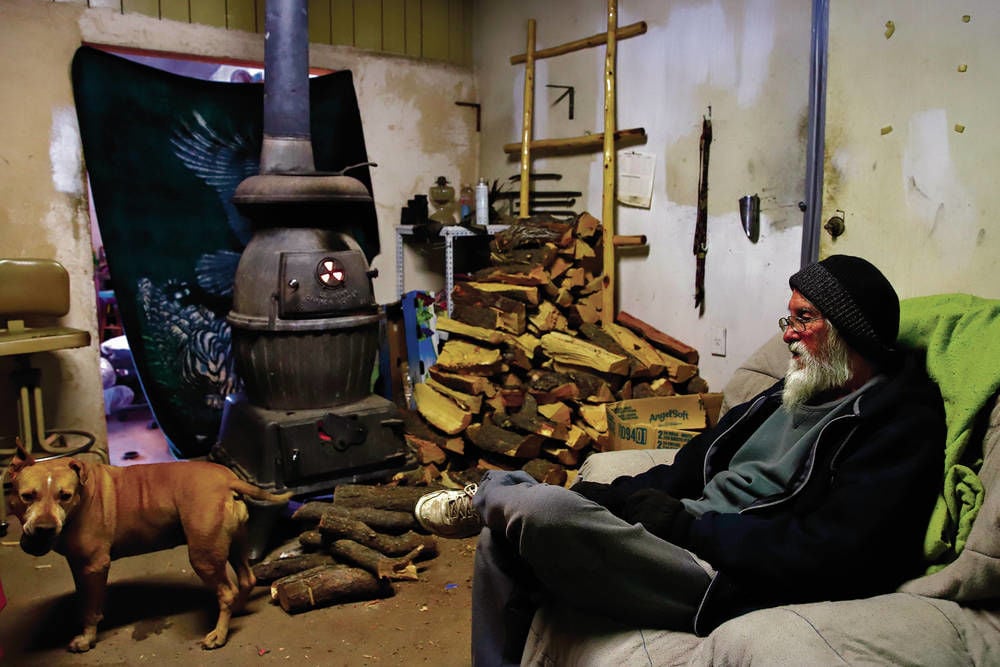 Rudy Archuleta lost his home in Rowe to a fire Sept. 12. He has since moved into his garage, which is heated only by a 1950s wood stove, where he’s pictured Tuesday. At left is his dog Chica, who barely escaped the blaze. Luke E. Montavon/The New Mexican 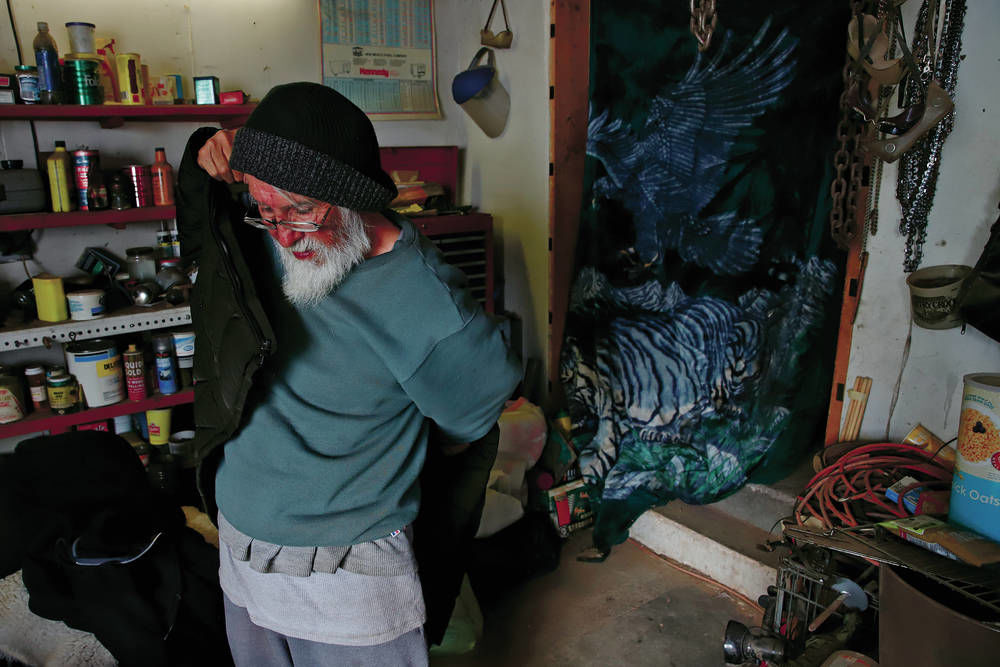 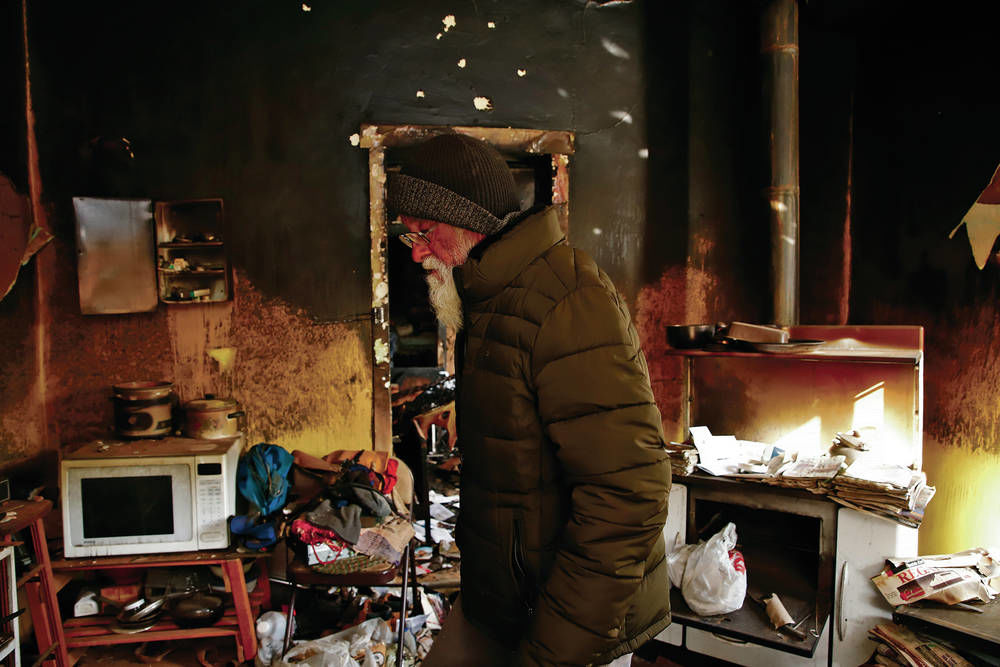 Rudy Archuleta, shows the home he lost to a fire. Its cause is still under investigation. Luke E. Montavon/The New Mexican 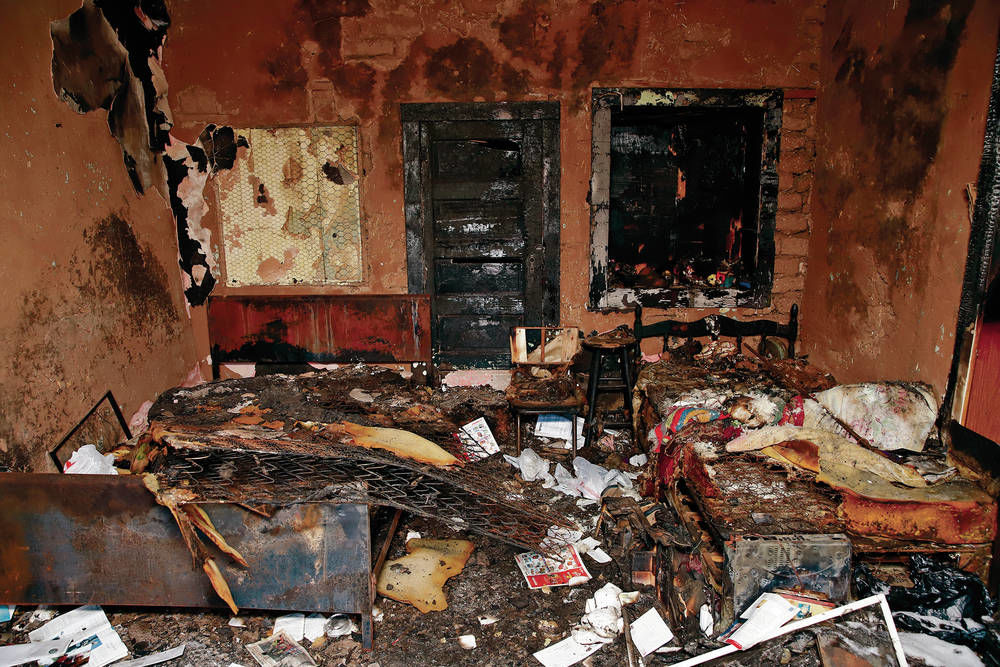 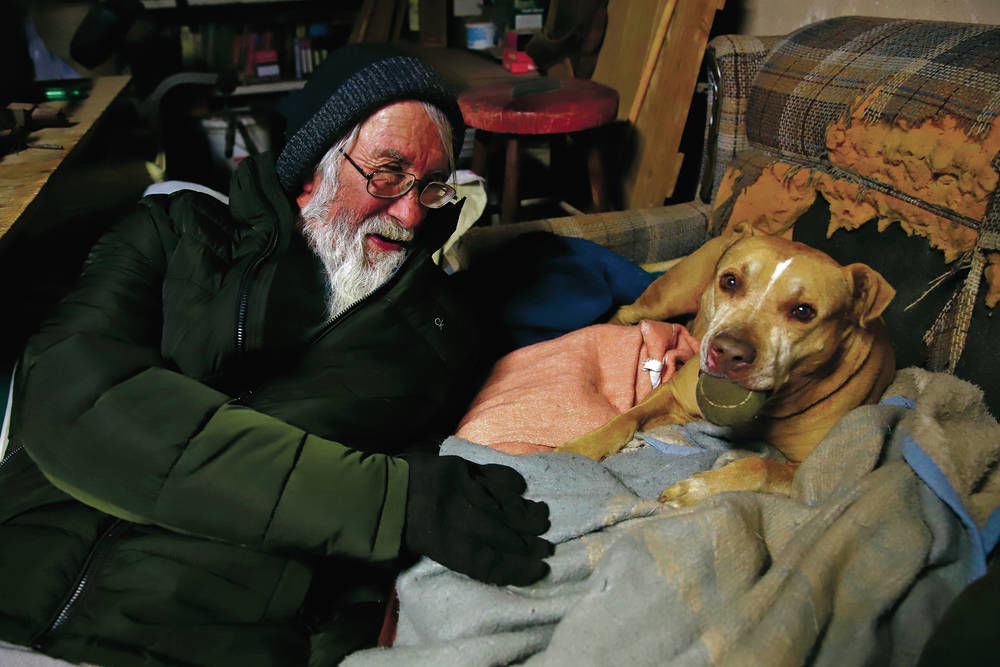 Rudy Archuleta lost his home in Rowe to a fire Sept. 12. He has since moved into his garage, which is heated only by a 1950s wood stove, where he’s pictured Tuesday. At left is his dog Chica, who barely escaped the blaze. Luke E. Montavon/The New Mexican

Rudy Archuleta, shows the home he lost to a fire. Its cause is still under investigation. Luke E. Montavon/The New Mexican

ROWE — The winter wind wailed as it swept through the burned remains of Rudy Archuleta’s house. A fire, still under investigation, consumed the home early on the morning of Sept. 12.

The fire took from Archuleta, a 69-year-old U.S. Army veteran of the Vietnam era, everything he had spent his life collecting: tools, furniture, food, clothes, books, magazines, photos, military discharge papers and other documents. Now he is living in his two-room garage, which houses his old workshop, with his two dogs, Negro and Chica.

He thought he and the dogs could make it through the winter there — until the season showed up in force this month.

The low temperatures and fast-moving winds that blew in with this week’s storms shook Archuleta’s garage Tuesday as he sat by a 1951 wood-burning stove, trying to stay warm. He reflected on his life and the fire that left him homeless and in need of aid. Fire officials say there were signs it might have been caused by arson. Friends have been brainstorming ways to help Archuleta live more comfortably through the winter until he figures out how to remain on the property near Rowe he inherited from his parents.

He doesn’t have the money to rebuild the house, Archuleta said, but he doesn’t want to leave his parents’ property: “This is my home,” he said.

He doesn’t want pity, he added, but is hoping someone will donate or loan him a camper or trailer to place on a neighbor’s property.

Looking around his garage at the leather works — belts, vests and jackets — he has made over the years, Archuleta called himself a “jack-of-all-trades.” For years after his discharge from the Army, he worked as a mechanic, tinkerer, upholsterer and leather goods expert.

He was a helicopter mechanic during the war.

The only son of Frank and Mary Archuleta, he didn’t have to volunteer to serve in the military, he said, but he did. “Everybody was going over there. Friends, relatives, uncles. It was like going to college.”

About six months into his first year of duty, he was sent home as a hardship case, he said, because his mother had fallen seriously ill. Both of his parents later died.

He grew up on the Rowe property, just off Interstate 25, and recalled playing in the nearby woods and fishing in the local rivers and streams. “Everybody out here knew everybody then,” he said. “It was like a big family.”

His family raised pigs, chickens and rabbits, he added.

He had kept many of his childhood toys, from stuffed animals to Tonka trucks. A few still survive, sitting on shelves in his garage. Others were consumed by the fire.

Archuleta never married or had children. He thrived in the community for many years until back pain forced him to stop working in the late 1990s.

“Everything went bad then,” Archuleta said.

But he does not want to dwell on that.

He feels blessed to have escaped the fire, thanks to the warning shouts of a friend, Jose Quintana, who was spending the night in his home and had awakened Archuleta from a deep sleep, shouting, “Fire! Fire!”

“I thought I was dreaming,” Archuleta said. “Then I smelled smoke, and it was like a bad nightmare.”

He staggered to his feet, groped around for some pants and sneakers to put on and wondered what to save.

Negro fled hastily out the door, but Chica, terrified by the commotion, dove under Archuleta’s bed. He managed to get her out and ran with her and Quintana into his yard, choking on smoke all the way.

Firefighters from nearby Rowe, Pecos and Glorieta showed up to fight the blaze but were unable to save the house.

“We stood around and watched it burn,” Archuleta said.

Quintana wonders if a drifter who had lived with Archuleta with for a while played a role in the fire.

Chief Raphael D’Amato of the Rowe Volunteer Fire Department said a firefighter discovered a can of gasoline and a lighter near Archuleta’s house. The State Fire Marshal’s Office is still investigating, D’Amato added.

State fire investigator Shane Woodward did not return a call Tuesday seeking comment on the case.

He figures God played a hand in keeping him safe. “Has to be,” he said, his eyes briefly tearing up.

He knows another storm is on its way this week. He plans to weather it with his dogs by the fire, watching whatever programs he can tune into on an old 1980s-era Sharp television set in his garage.

“As long as I got some wood, I stay warm,” Archuleta said, eyeing a stack of firewood.

He doesn’t want to believe he is homeless.

Friends of Rudy Archuleta, a 69-year-old Army veteran who lost his home in Rowe to a fire in September, have talked about starting a GoFundMe campaign or setting up a bank account to collect contributions to help him purchase a camper or trailer where he could live more comfortably on a neighbor’s property, but no one has taken such action. Archuleta said anyone who wants to help can call him at 505-570-1683.

Rudy is my neighbor and a good guy. The day after his home burned he came to see me to let me know he was ok. Even after all that happened he let me know if I need anything at all to let him know. That is the heart he has. More concerned for others than himself.

My heart breaks for this man and his dogs, I hope the fine people in his community give him the helping hand he so deserves. God bless.