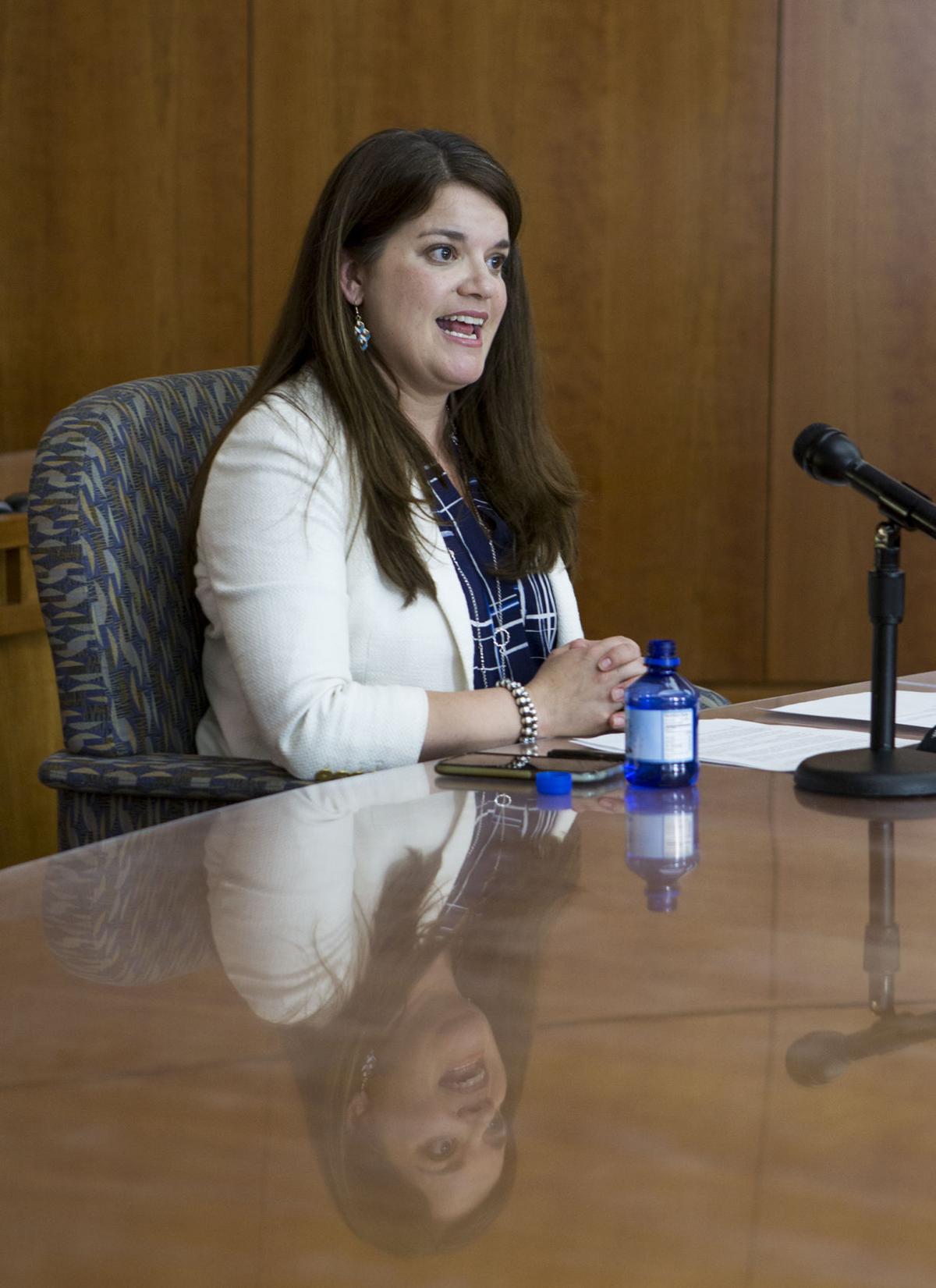 Secretary of State Maggie Toulouse Oliver on Friday reminds voters of ways they can participate in the primary election. 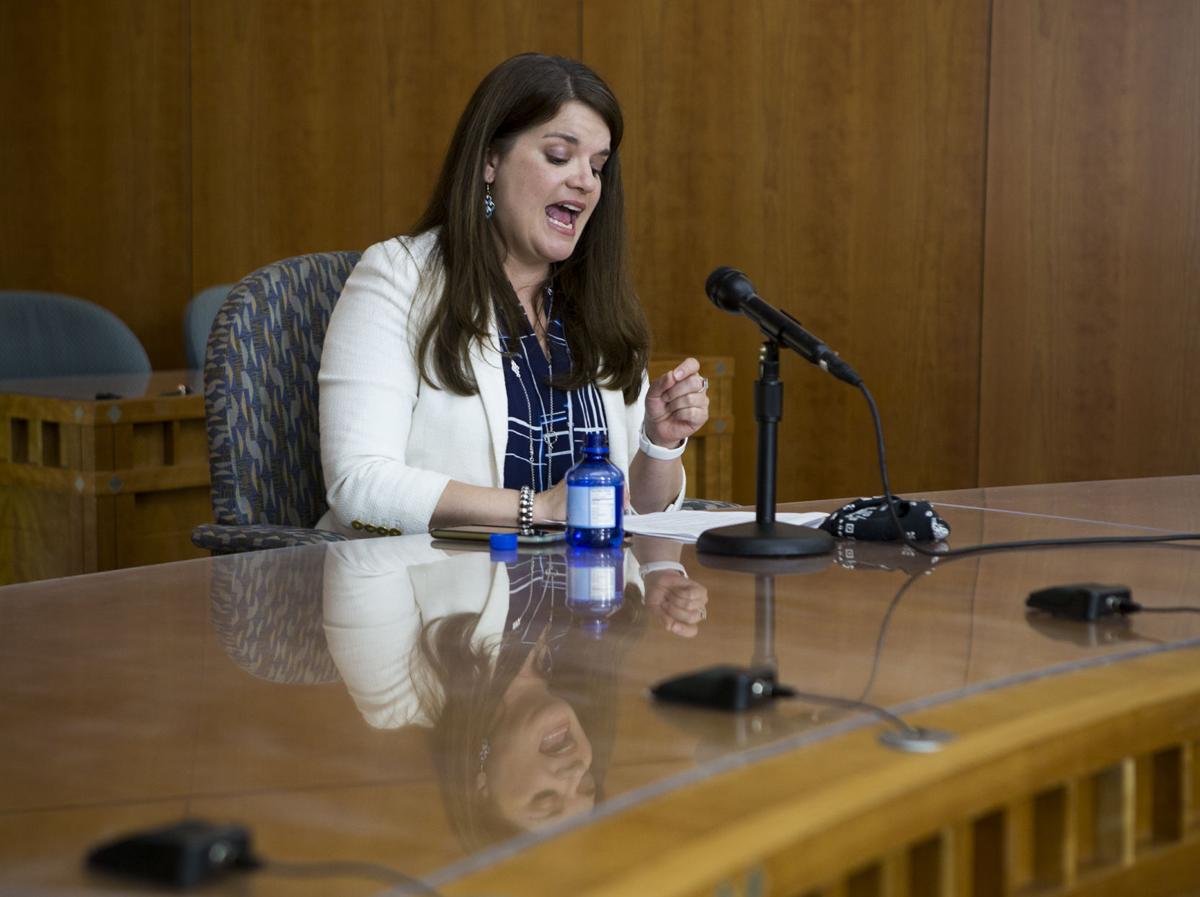 New Mexico Secretary of State Maggie Toulouse Oliver reminds the public of ways they can vote in the upcoming primary election. She encourages people to fill out an absentee ballot and only to vote at polls if absolutely necessary.

Secretary of State Maggie Toulouse Oliver on Friday reminds voters of ways they can participate in the primary election.

New Mexico Secretary of State Maggie Toulouse Oliver reminds the public of ways they can vote in the upcoming primary election. She encourages people to fill out an absentee ballot and only to vote at polls if absolutely necessary.

In the meantime, “problems with delivery timing” have led to delays in mailed absentee ballots.

Santa Fe County Clerk Geraldine Salazar said her office had put 22,239 ballots in the mail as of Friday, but many voters still had not received them due to sluggish delivery.

Salazar said she has been in communication with the state’s congressional delegation “to reach out to the U.S. Postal Service to resolve the lengthy time it takes for our voters to receive their absentee ballots.”

These problems add more hurdles for county clerks across the state at a time when they already are bogged down with preparations for an unprecedented primary election during a pandemic.

During an interview last week, Toulouse Oliver, a Democrat, said finding enough people to work at the polls could be a problem in larger counties such as Bernalillo, the state’s most populous. Valencia County Clerk Peggy Carabajal also has expressed concerns about recruiting poll workers, the secretary of state said.

“It could potentially create bottlenecks for Election Day results if these Election Day polling places are operating on skeleton crews and they end up having huge turnouts that are unanticipated,” Toulouse Oliver said.

Carabajal did not return a phone call Friday to discuss the situation.

Clerks in the state’s 33 counties have less than two weeks to finish mailing a record number of absentee ballots and prepare polling locations so they are safe for voters and poll workers.

As of Friday morning, 132,398 absentee ballots had been requested statewide. The deadline to request a ballot by mail is May 28.

On Friday, Toulouse Oliver joined Gov. Michelle Lujan Grisham in a news conference broadcast live on Facebook. They urged every voter who does not need assistance at an in-person polling place to cast their ballot by mail.

Ensuring most people vote absentee — and cast their ballots early — would make it less likely for poll workers to be overwhelmed by droves of voters on Election Day, officials said. It also would protect poll workers, most of whom are over the age of 60 and at higher risk of developing severe cases of COVID-19 should they contract the illness.

Initially, counties were expected to open a combined 600 polling sites on Election Day for people voting in person and turning in last-minute absentee ballots.

According to state Sen. Daniel Ivey-Soto, D-Albuquerque, the number of polling places has been reduced to about 360. Ivey-Soto, who works as an attorney, said he is providing technical support and training for county clerks gearing up for the election.

He also represented 27 county clerks across the state who asked the New Mexico Supreme Court in April to allow them to send a ballot to every voter and conduct the election by mail. The petition was prompted by problems in Wisconsin, where skeleton crews at primary election polling locations, combined with delays in getting absentee ballots to voters, led to long lines in the middle of the pandemic.

Republicans in New Mexico opposed the request for the mail-in election, and justices ruled in the GOP’s favor: State law requires voters to request an absentee ballot before one can be sent. The court ordered the state to mail an absentee ballot request, rather than a ballot, to every registered primary voter.

A voter must be registered as a Democrat, Republican or Libertarian to cast a ballot in a New Mexico primary.

“I think we’ve seen some really terrible lessons and tragedies as a result of in-person voting, so if at all possible, please don’t do that,” Lujan Grisham said Friday.

Ivey-Soto said the problems county clerks now face were issues they had anticipated, which led them to petition the Supreme Court in the first place.

Even worse than slow election results, Ivey-Soto said, would be an increase in people deciding to vote in person on Election Day because their ballot came late or they fear it won’t get counted in time if they return it by mail.

An election night bottleneck for ballot counting would be exacerbated by any potentially close race — such as the heated Republican primary in the 2nd Congressional District or the fierce fight for the Democratic Party’s nomination in the 3rd Congressional District. Seven Democrats are vying for the U.S. House seat being vacated by U.S. Rep. Ben Ray Luján. Luján is running for U.S. Senate.

Salazar said Santa Fe County has drastically cut the number of polling locations that will be open June 2 in anticipation of a shortage of poll volunteers.

During the 2016 primary election, 51 polling locations were open. This year, that number has been slashed to 19, she said. The county seems to have enough poll workers after the cut, Salazar said.

“We’re doing everything we can to manage this election cycle,” Salazar said. “We don’t know, really, are we going to be hit? We don’t think so because we see the amount of absentee ballots requested.”

Request an absentee ballot at the secretary of state's website, nmvote.org. The deadline is May 28.

I think it is too bad that once the SOS and the county clerks got the state supreme court decision that they should mail request for absentee ballots to all voters, they did not immediately mail them out--unless state law states they can only be sent out x days before the primary....Then the SOS and county clerks would know the extent of these absentee ballots. You can also drop your ballot off at early voting sites and voting sites on the day of the election if you do not trust the USPS to get it there.

This will be a Hungarian Cluster... of biblical proportions, and historic data shows many will get "lost" for whatever reasons...https://www.realclearpolitics.com/articles/2020/04/24/28_million_mail-in_ballots_went_missing_in_last_four_elections_143033.html?fbclid=IwAR1_RUi4uQxP3TZ9BUvbM3XEmdI5L7LxQShdKWFa8GzZI4t7y-GhlJeH78M

Why is MLG discouraging voters to vote in person? Could it be her parties insisstance on using paper ballots. I went to vote this week at the Cortez poll in the underground parking garage. There must have been no less than 8 volunteers just sitting there waiting for someone to vote. No problem with volunteers here. I was not asked for identification which should be standard to vote in every election. This push to discourage voting in person smacks of partisan politics and does not hold water. I hope people will use common sense and not allow the fear mongering to discourage them from exercising their civil rights.

Question ... if you've requested an absentee ballot, receive it and change your mind, can you still vote in person)?

Yes. My neighbors did just that.

and then many will mail in the ballot also, just think when this is all over, NM will still be ranked 50th in everything