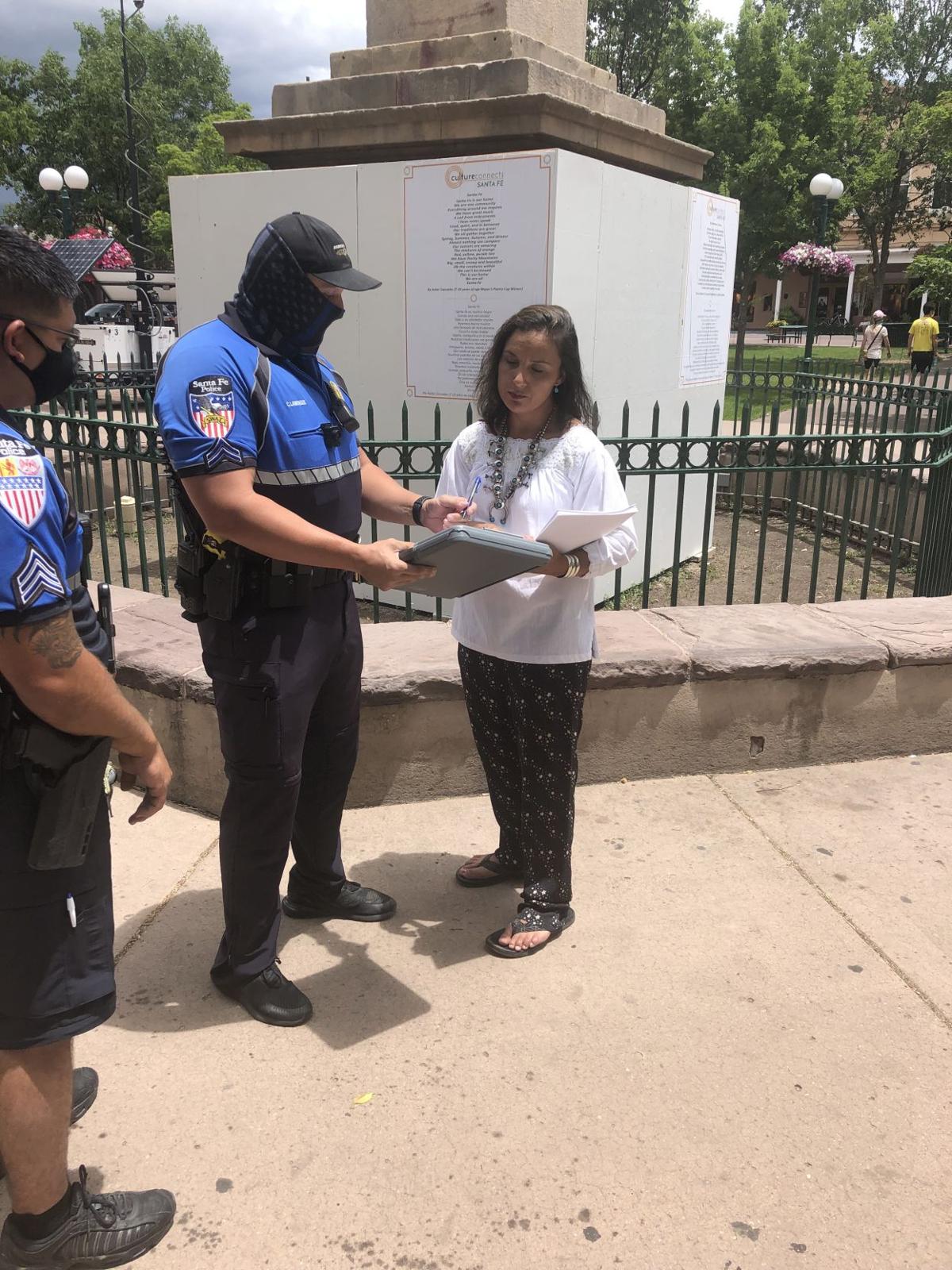 Santa Fe police in July cited Republican congressional candidate Alexis Martinez Johnson for not wearing a mask as she was campaigning on the Plaza. The ordinance has become a major talking point for Johnson, who at one time publicly showed support for masks.

After all her showboating, Republican congressional candidate Alexis Martinez Johnson decided not to stand trial on a charge of violating Santa Fe’s ordinance requiring people to wear masks in public places.

Johnson pleaded no contest Tuesday to violating the ordinance.

She campaigned on the Plaza without a mask the afternoon of July 3, saying city government couldn’t dictate that she wear a face covering during the novel coronavirus pandemic.

In fact, Johnson said, she had a constitutional right not to wear a mask. But she couldn’t identify a section of the U.S. Constitution that negated the city ordinance.

Other people on the Plaza complained about Johnson being unmasked while she handed out flyers and spoke about her candidacy in the 3rd Congressional District.

Police Officer Chris Lamoreux issued a citation to Johnson, who accepted the ticket but continued campaigning without a mask.

Johnson initially pleaded not guilty. Her trial was scheduled for Tuesday.

Instead, she changed her plea to no contest, which is treated as an admission of guilt by the court.

Lamoreux said the terms of the deal call for Johnson’s sentence of a written warning to be deferred for 90 days. If she stays out of trouble, no conviction would be listed on city records.

A second offense of the mask ordinance would carry a fine of $50.

The hearing was conducted by telephone because of the pandemic. It lasted four minutes, a fraction of the time Johnson campaigned without wearing a mask.

Vigil said the plea deal discussed on the call would be committed to writing and emailed to Johnson.

With that, the candidate hung up. Her case can’t conclude for at least three months, but her political stunt is over.

Johnson’s hypocrisy on the worth of masks will be what she’s remembered for in her moribund campaign for Congress.

On the Plaza, Johnson carried herself as a rebel with a cause. She said the government couldn’t infringe on personal freedom by ordering her to wear a mask while she was outside.

Fresh air, Johnson said, would reduce the chances of an unmasked person spreading or contracting COVID-19, the disease caused by the virus.

Various passersby on the Plaza didn’t appreciate her defiance. One man yelled at Johnson for putting other people at risk.

Public opinion against Johnson soon escalated. I wrote columns about how she’d flip-flopped on face coverings.

Johnson and her four young children all wore masks in April when they attended an outdoor rally protesting Democratic Gov. Michelle Lujan Grisham’s business strictures during the pandemic. A photo of Johnson and her kids, all masked for safety, ran in The New Mexican.

At that time, Johnson’s decision to wear a mask was voluntary. Santa Fe’s mayor and city councilors did not approve the ordinance on mask use until June 10.

There was more, none of it good for Johnson. She was a public fan of masks until at least late May. She placed an order on the internet from a woman who was making customized face coverings.

“Heather I love your masks!” Johnson wrote. “Not sure what bidding your doing but I would like to buy a [Dallas] Cowboys one from you. I can buy two. Let me know how much. I’m here in Santa Fe.”

Johnson wanted to outfit her children in custom masks, too.

“Also let me know when you have some for kiddos. I have 2 very small kiddos and 2 bigger kids,” she wrote.

Heather Nordquist made the masks Johnson admired. Nordquist told me she delivered masks on May 29 for Johnson’s 2-year-old twins.

But as the Independence Day holiday approached, Johnson went to the Plaza on a mission to denounce the importance of masks and the government that had mandated them.

She set up a table adorned with U.S. flags. Johnson said personal freedoms were being taken away while disrespect of America escalated.

An ally was filming her stand against face coverings and other perceived enemies.

During Johnson’s soliloquy, she said people who oppose patriotism would like to fling her display of flags to the ground.

No one made a move against the flags Johnson wrapped herself in. Her claims were bluster.

The same was true of her denunciations of the ordinance on masks.

Johnson will return to private life. Her histrionics will be forgotten almost as fast as she is.

America's judiciary is finally declaring and reminding all of the lawful reality that we are composed of THREE separate departments of governance. The Executive cannot write and enforce their invented orders... especially those that deny our Constitutionally guaranteed rights. Sobering reality is making headway in the states of Ohio and Pennsylvania. All federal rulings at the state level are applicable to every state. I encourage Milan to read a fellow journalist's report regarding this timely subject matter. And I encourage Alexis Martinez Johnson to study and absorb these important rulings that could help propel her towards her political goals. https://blog.nomorefakenews.com/category/covid/

Johnson has the stand of “pro-life.” Pro-life goes beyond the baby in the womb. It means to take measures to let everyone live. This includes the wearing of a mask, to prevent the contagious virus spreading to others.

Yes, that Leger woman is most likely to win, but as with all elected officials in NM, we will be poorer for it. Look at what we elect, now look at where NM is in the ranking of states in most all categories. Coincidence? Nope. But NM voters are insane, electing the same kind of incompetent, egotistical politicians out for themselves, and expecting different results. The Leger woman is a good example.

Well, Dr. Johnson, you may be right that the vast majority of New Mexicans are insane. And that you are the only one who is right. Or, the converse may be true.

As a scientist, I look for data to prove or disprove an hypothesis. The data I see for NM's ranking in most all economic and societal measures, compared to other states, shows it to be last most often. Now if you think elected politicians , thus government, are responsible for the state's performance, and it has overwhelmingly been dominated by Democrats since the Great Depression, what conclusion would you come to? Perhaps you have another hypothesis for why NM is and has been so poor, backward, primitive, and failing in most all categories? I'm all ears. Perhaps you think elected politicians have nothing to do with any of it, and thus voters are not to blame?

Keep repeating the governor has the power to order us to do anything she wishes and still it isn't true. Barry Rabkin must be getting paid to spread the propaganda because nobody would do this for free. Who is paying you, Barry? The Pennsylvania Federal Court has ruled in a case titled Butler County v. Wolf that their governor never had the authority to order businesses, churches, restaurants, and schools closed nor people socially distanced and ordered to wear masks. All Federal rulings at the state level are transferable to every other state. Gov. Michelle has effectively murdered Santa Fe and every other city that obeyed her lawless orders. Roswell voted to ignore her orders and everything is going quite well down there. Milan Simonich is a scold with a vindictive agenda who is doing more to harm his readers than inform them. Here's a link to the court ruling.... https://tinyurl.com/y6f8j23j

So, Chaves County according to you, (compared to here I presume, SF County) is where "everything is going quite well" in ignoring the Gov.'s orders...I have to assume you mean everything except the virus; for as the data shows, Chaves has more cases and deaths than SF County, even with only 43% of the population of SF County (appx> 64500 there vs 150300 here; not to mention tourists traveling here.). Your pronouncement of "all good in Chaves County" is very Trumpian; did you just make it up? Look here: and learn:

Sorry Rodney, but the New York Times cannot be trusted to tell the truth about anything. This has been ongoing long before Obama left office. Also, the tests are defective beyond belief, too. "New cases" is meaningless. Count the deaths. There are so few... while the regular mortalities like cancer, heart attack, gun violence, drug overdose... those FAR outnumber this covid thing. Nobody believes the flu. It's over and the judiciary is finally kicking into gear. Read my link above.

Nothing in the Constitution saying you have to wear pants, either.

But fortunately there is State Law that gives the governor the authority to manage the 'comings and goings' of people in the State during a pandemic. That means her PHOs carry the full force of law.