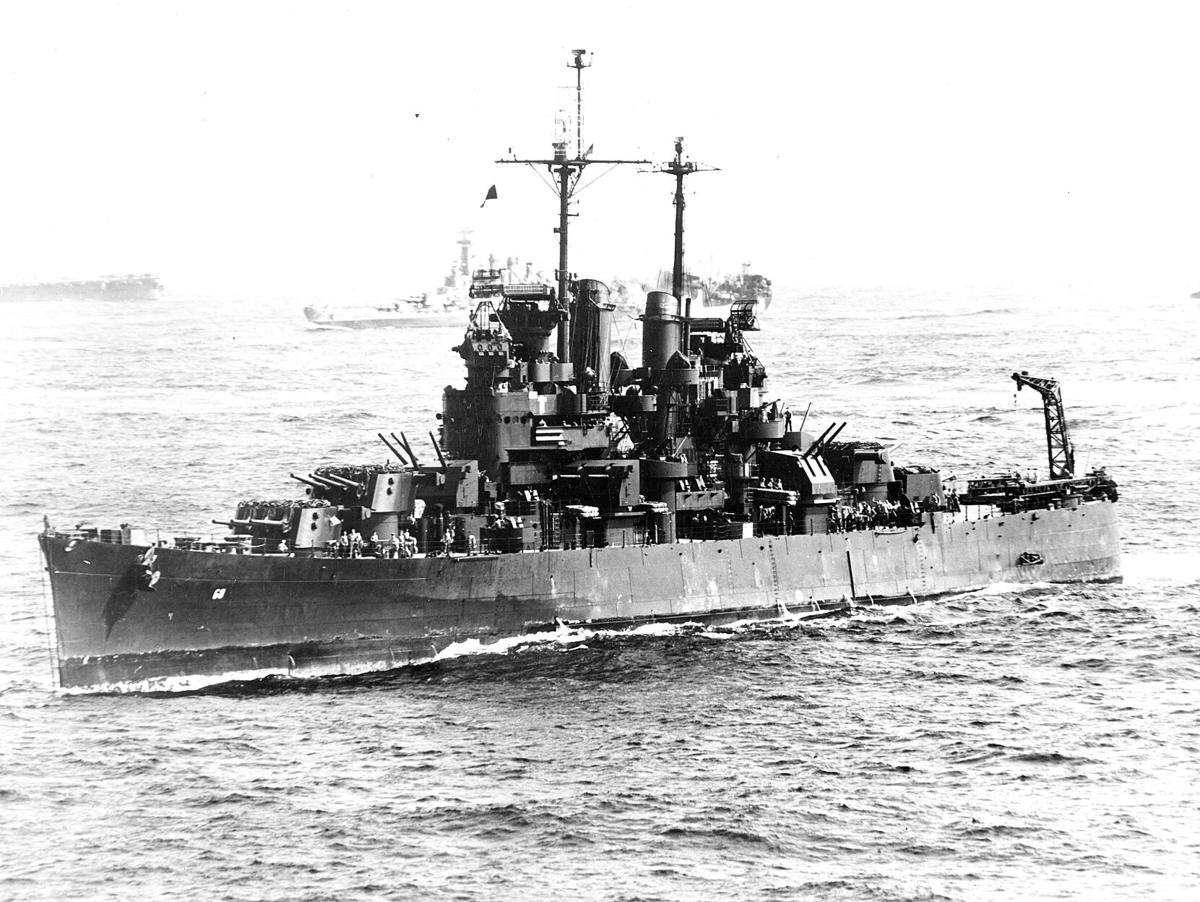 The USS Santa Fe at sea during the Philippines campaign in December 1944. The light cruiser suffered few casualties and almost no major damage during her World War II service. She was nicknamed Lucky Lady as a result. 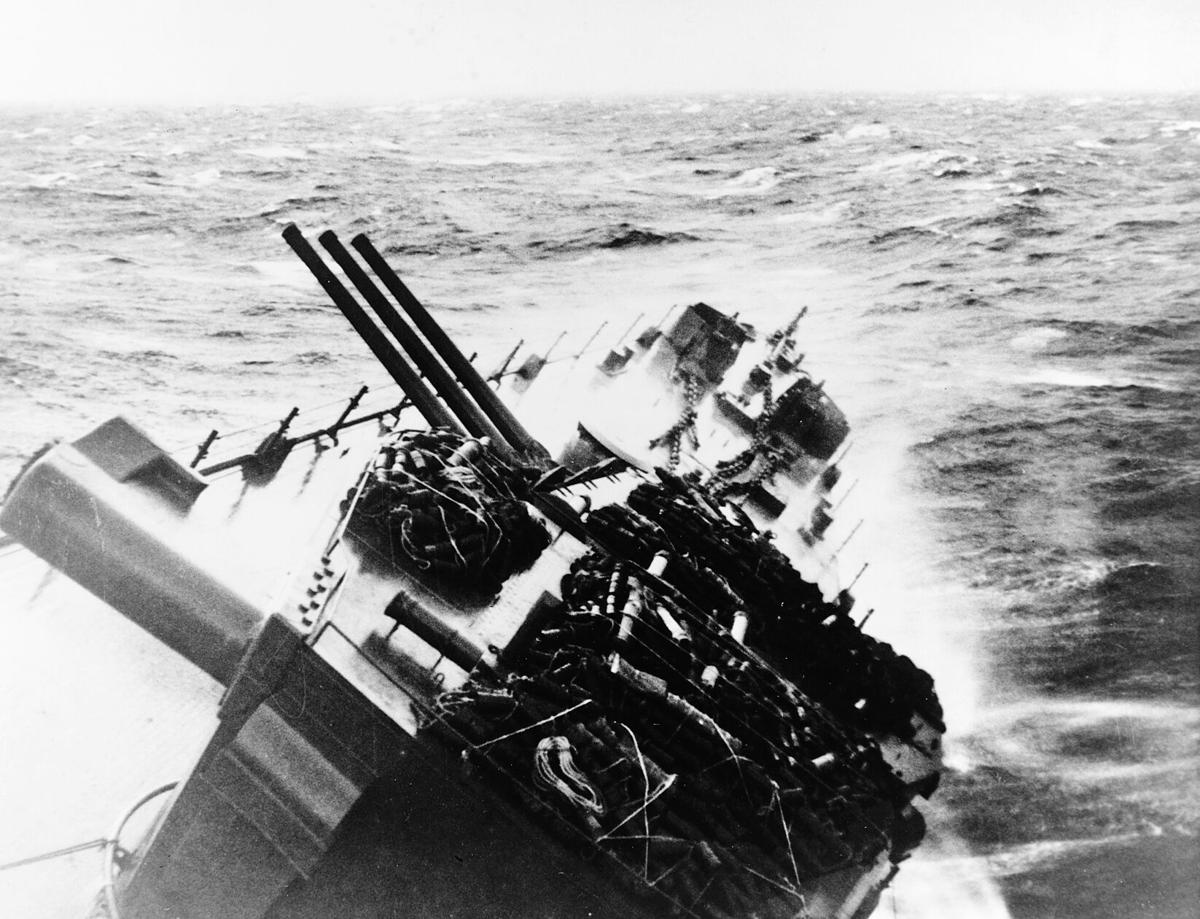 The USS Santa Fe rolls about 35 degrees to starboard as she rides out a typhoon encountered in the South China Sea in December 1944. The light cruiser suffered few casualties and almost no major damage during her World War II service.

The USS Santa Fe at sea during the Philippines campaign in December 1944. The light cruiser suffered few casualties and almost no major damage during her World War II service. She was nicknamed Lucky Lady as a result.

The USS Santa Fe rolls about 35 degrees to starboard as she rides out a typhoon encountered in the South China Sea in December 1944. The light cruiser suffered few casualties and almost no major damage during her World War II service.

Sailors called her the Lucky Lady.

She was all that and more.

Despite three years of combat in the Pacific theater during World War II — a tough sojourn in which she logged 220,000 miles, the longest tour of any major naval unit during the conflict — the light cruiser USS Santa Fe sustained few casualties and almost no major damage.

It was, historian and author Steve Jackson wrote in his 2003 book Lucky Lady: The World War II Heroics of the USS Santa Fe and Franklin, one of the true feats in U.S. Navy history.

“During that time, she had participated in 42 air strikes, 12 shore bombardments, sunk seven ships and had officially knocked down seven planes, though there were plenty more sent to the sea in flames when holes from the USS Santa Fe’s guns in them,” wrote Jackson, whose father, Donald Clyde Jackson Jr., served on the Santa Fe.

Though the ship was built on the East Coast, it stands as a testament to Santa Fe’s ties to the U.S. Navy, despite the fact that the desert-anchored city does not have a port — or even a large body of water near it.

This week, the Navy is making port in Santa Fe as part of an initiative that began in 2005 to bring sailors to cities that often don’t have a natural tie to the maritime branch of the military.

“We do about 12 to 15 of these events every year,” said Lt. Cmdr. Kevin Chambers, the lead planner for U.S. Navy Week activities. “We send 50 to 75 sailors to a town or city that doesn’t have a traditional Navy presence — somewhere like Santa Fe, Spokane, Nashville, Kansas City.”

Visitors to City Hall can also view the bell from the original USS Santa Fe hanging in the main hallway.

Accompanying plaques provide some background on the construction of the ship, the many campaigns it took part in and the names of its commanding officers.

The USS Santa Fe did its namesake city proud.

It was commissioned in November 1942 and set sail with about 1,200 men, many of whom had never been to sea before, Jackson wrote.

Some sailors assigned to the light cruiser, particularly those of Catholic faith, saw the ship’s naming as a sure sign they would be protected, given Santa Fe’s reputation as a city of holy faith.

But the experienced sailors onboard harbored more serious concerns after learning the woman who christened the ship — Caroline Chavez, niece of then-U.S. Sen. Dennis Chavez of New Mexico — did not use the traditional bottle of champagne to perform the act.

Instead, according to Jackson she used a bottle filled with water from the Santa Fe River — which, fortunately, the archbishop of Santa Fe had blessed.

The ship bombarded Japanese-held islands during the war, fending off kamikaze pilots and bracing for torpedo hits.

The ship served in every engagement in the Central Pacific campaign, Jackson wrote, and soon earned a “reputation for getting in and out of hot spots without a scratch.”

Jackson paints a literary portrait of a ship helmed by clear-headed men and manned by ordinary guys determined to get the job done through hard work and dedication. They may have been scared when the shooting started, but they fired right back.

And, as Jackson makes clear, the Japanese weren’t the only threat to the Santa Fe during the war.

Nature, in the form of a typhoon, enveloped the ship and turned her on her side one winter night, tipping the ship past the 50-degree mark.

The USS Santa Fe, Jackson wrote, “hovered there, fighting to regain her balance as the wind pushed her down, like a killer trying to hold his victim’s head underwater.”

The ship began to lift itself as if operating under a will of its own, Jackson wrote, until she was once again upright, leaving the men onboard shaking their heads in disbelief. The Lucky Lady had come through for them once again.

The original USS Santa Fe was inactivated in 1946 in Washington state. Nearly 50 years later, the U.S. Navy commissioned a nuclear-powered fast attack submarine — one of 41 known as the Los Angeles class that are still active — and named her the USS Santa Fe. The submarine’s home port is in the Portsmouth Naval Shipyard on the East Coast, Chambers said.

Chambers said U.S. Navy Week programs often teach people “you have a ship named after your city or state.” He said over the years hundreds of ships have been named after New Mexico cities or the state itself.

Among those naval vessels with New Mexico monikers past and present: USS Albuquerque, USS Alamogordo, USS Pecos, USS Tucumcari and USS New Mexico, a Virginia-class nuclear attack submarine commissioned in 2010. The first New Mexico, a World War I- and II-era battleship, served in the Pacific theater.

Oppurtonity to participate in the events .

Our Grandson Valentino danced the Native American Hoop Dance in 2014 when they docked in Hawaii .

He was only six years old at the time !

The Lightning Boy Foundation was formed to commemorate his short life !

He was a boy of mixed blood lines that truly represented New Mexico!

ANCHORS AWAY SANTA FE ! and am sure you will welcome the boys in blue in your traditional south west warm style. just don't ask them red or green, as they may not know how to respond.

This is such a good idea, especially for the kids. They need to get out of their geographic bubble and learn about other climates / situations / parts of the world. A few years ago I taught a unit for a junior high girls' STEM festival here in Santa Fe, introducing the girls to the concept of gravity and measuring gravity. I included the very important concern about how measurements are influenced by the tides. I had to explain first what a tide is. Any kid growing up on the coast would know this, of course, but it's irrelevant to the daily life of an inlander and most of them had never even heard of tides. Good for the Navy - I hope they can help people to think about the Earth in broader terms, even if people don't extend this process to thinking about military readiness or operations. Stretching the brain is good for everyone.