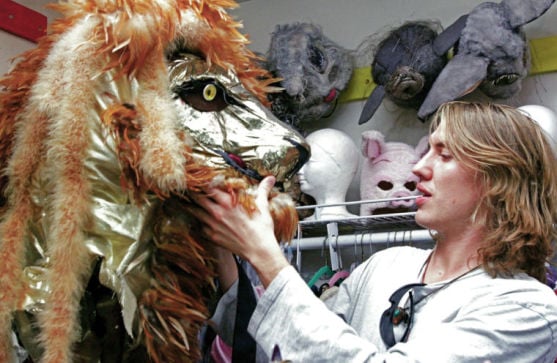 Daniel Day inspects costume heads Monday at Costumes! Ltd. on Second Street. Costumes range from $45 to $250, and the shop will have extended hours until Halloween. For more information, call 988-9501. Jane Phillips/The New Mexican 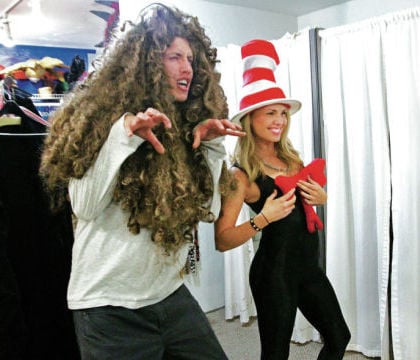 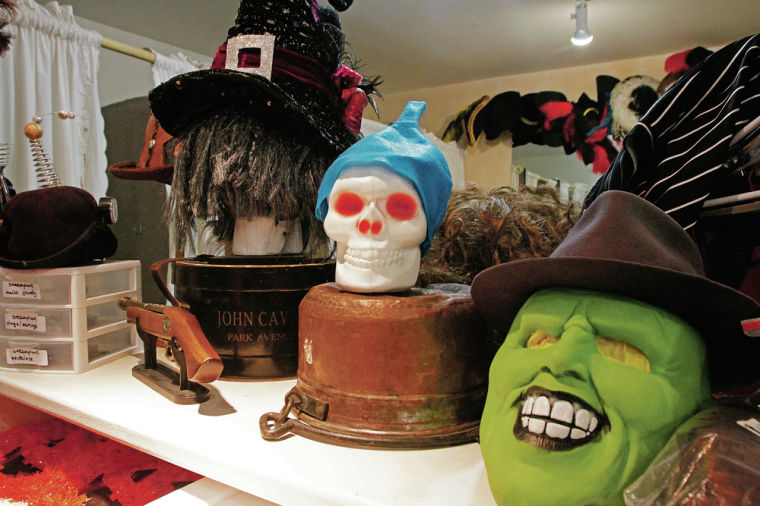 Costumes! Ltd. features a large inventory of costumes and accessories. Costumes range from $45 to $250, and the shop will have extended hours until Halloween. For more information, call 988-9501. Jane Phillips/The New Mexican

Daniel Day inspects costume heads Monday at Costumes! Ltd. on Second Street. Costumes range from $45 to $250, and the shop will have extended hours until Halloween. For more information, call 988-9501. Jane Phillips/The New Mexican

Costumes! Ltd. features a large inventory of costumes and accessories. Costumes range from $45 to $250, and the shop will have extended hours until Halloween. For more information, call 988-9501. Jane Phillips/The New Mexican

On Monday morning, 97.3 Kiss FM radio DJs Dana Cortez and The-Kandee-Man filled their drive-time show with banter about a list of the Top 10 Halloween costume ideas across the United States. Kandee gave readers a hint about the No. 1 costume idea for women — according to a list they were reading on air — saying that you might find a lot of them every day in New Mexico, but not in other places say, Texas.

The top costume idea— according to the list published on American Live Wire — Pocahontas/Native American.

“This is one of the easiest costumes to customize and accessorize to your liking,” according to the list. “Whether you want to go all out and dress like an authentic Native American, or you just want a reason to wear your moccasins …”

So is it really OK to dress up like a Native American for Halloween?

Apparently, it is in some parts of the country. A Google search for the words “Halloween” and “Native American” turned up dozens of Native American-themed costumes for all ages and genders. Sexy, Native-themed costumes — with names like “Tribal Trouble,” “Chief Hottie Body” and “Rain Dancing Diva” — are particularly prevalent. Men aren’t left out, either. For $45, they can buy a “Chief Wansum Tail” costume from Yandy.com, which comes complete with black fringed, ultra-suede top and pants and matching “authentic feather head dress.” Or they can buy a “Noble Warrior” costume for $ 31 from CostumeSupercenter.com — “tomahawk sold separately.”

Couples also can step out together as “Reservation Royalty.”

But while Native-themed costumes maybe all the rage nationwide, in Santa Fe, where tribal dress is a celebrated art form and worn by tribal members for religious and cultural ceremonies, “people don’t go in for that,” according to Anne De May , owner of Costumes! Ltd.

There is also an entire line of Native American-themed accessories — in the Western section next to the cowboy items and the “Mexican Serape” — including a headdress, wig and bow and arrow set.

The store may stock it, but that doesn’t mean they sell.

Michael Graham , president of 20 Party City franchises in New Mexico and Arizona, said the “Dreamcatcher Cutie” is “definitely” not on the store’s top-seller list. “It’s so far down on the list, it doesn’t even register,” said Graham, who noted that the Santa Fe store has sold four of the “Dreamcatcher Cutie” costume this year. He said he orders 12 to 24 of each type of costume the store offers.

So what are of the must-have costumes in Santa Fe? Ninjas, morph suits and lawless ladies.

Graham said he’s also never received a single complaint about any of the merchandise in the 20 years he’s been in the business, which doesn’t mean everyone likes them.

“Those costumes, overall, are probably the worst representation of Native American people,” said Douglas Miles, an Apache artist and social critic from San Carlos, Ariz., whose show What Tribe? — which examines stereotypes of Native people in media — has been traveling the Southwest this year. “As far as representing who Native people are, they are good for nothing.”

Miles said Americans are becoming more savvy. “But now,” he added, “there exists a myth that we are in a post racial society, which is really not true. We’ve made inroads, but a lot of these images are demeaning and harmful over time. And a bunch of people still don’t know they are harmful.”

Miles said he has felt a shift in Native consciousness about racial stereotypes in the past few years, but he said it wasn’t surprised that no one called the radio show to complain about the costume list because there just aren’t that many Native people to complain.

“Native American people don’t want to be looked at as a one dimensional stereotype any longer,” he said. “We never liked it, but no one ever asked us. The reason these faux Native American symbols have gotten so far is that we only make up 2 percent of the public, bottom line. So it’s really hard to actually address these issues. And some of these images have become a part of American pop culture, so we are just used to it.”

Some time fashion designers go overboard to designing dress which most of the people find it difficult to connect with and hence condemned by many.
Look here

Halloween is for children. Just goes to show, many adults never grew up.

So what about people pretending to be cowboys (all year round)?

Leave it to ignorant youth and arrogant White politics to declare this "Post-Racial America".