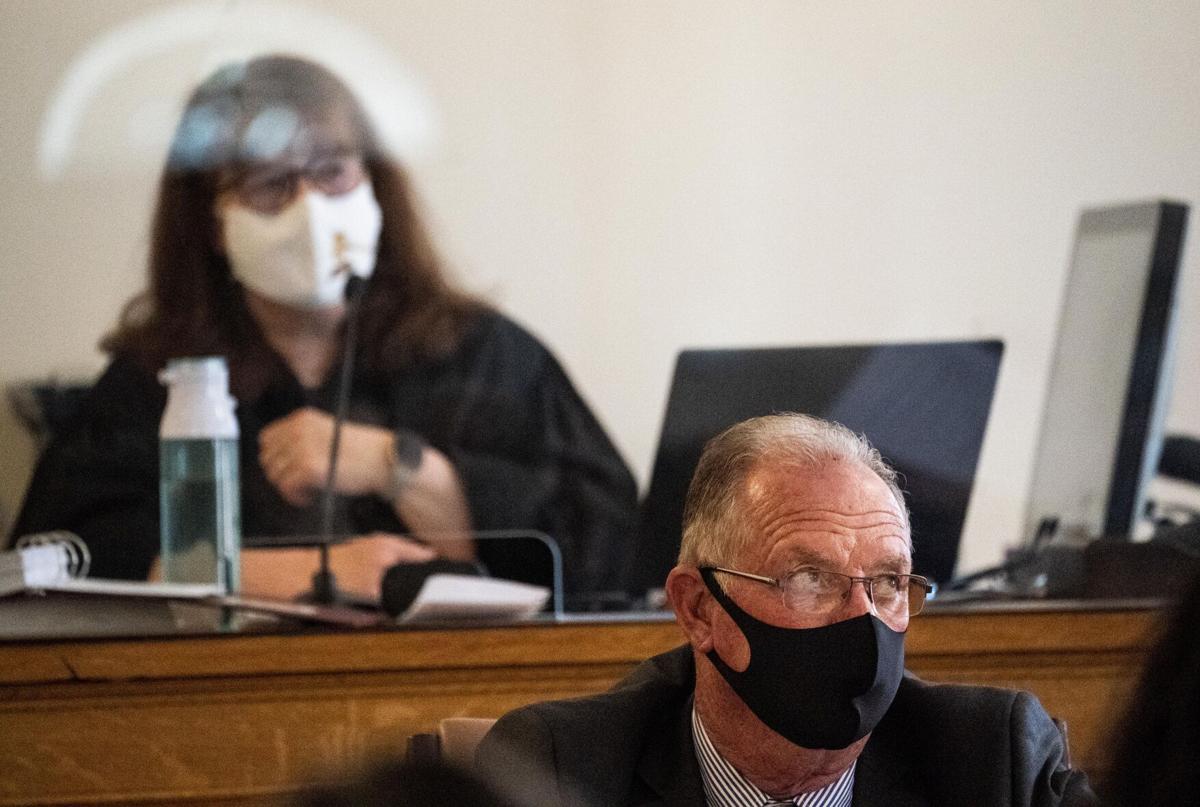 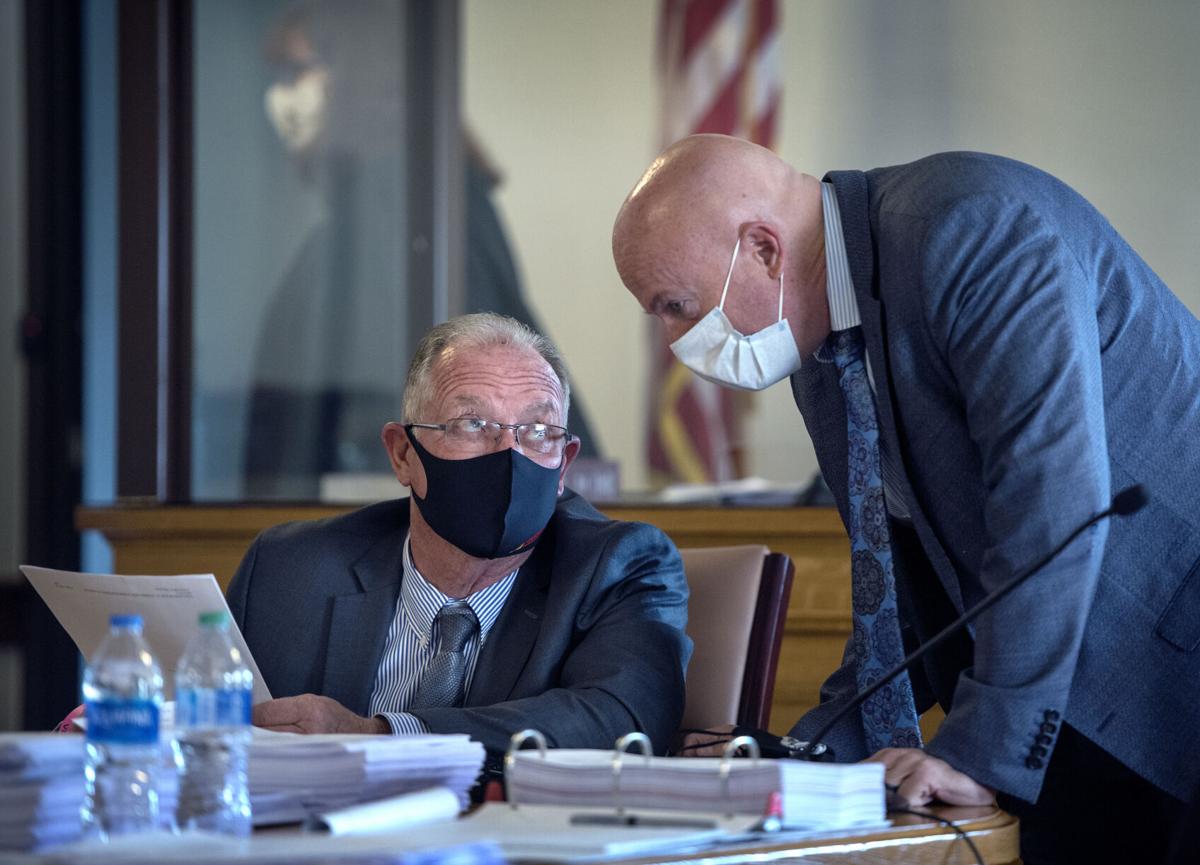 Rio Arriba County Sheriff James Lujan, left, and his attorney, Jason Bowles, talk in the courtroom in Tierra Amarilla before the start of the first day of his trial Wednesday. 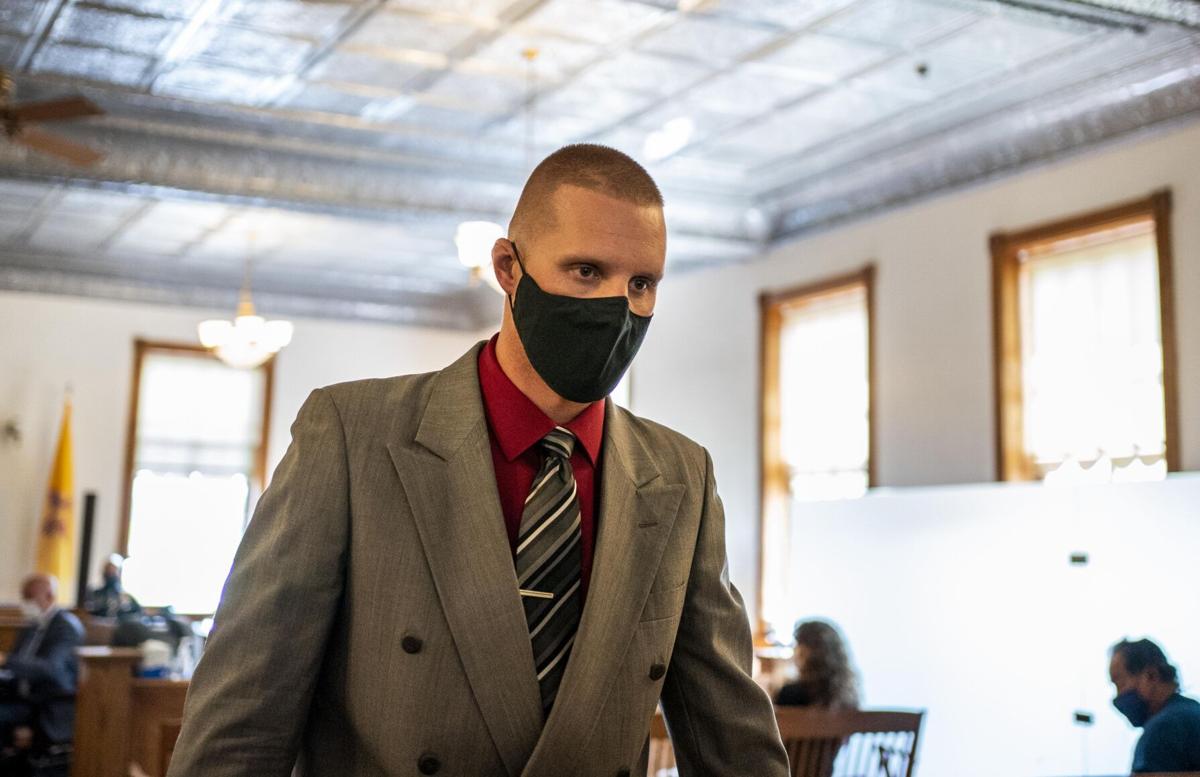 Rio Arriba County Sheriff James Lujan, left, and his attorney, Jason Bowles, talk in the courtroom in Tierra Amarilla before the start of the first day of his trial Wednesday.

That’s when Lujan, 60, is accused of helping a felon, former Española City Councilor Phillip Chacon, evade police after a high-speed chase and telling a sheriff’s deputy who witnessed some of his actions not to tell anyone.

Lujan is being tried on charges of aiding a felon and bribing a witness. Jury selection was held Tuesday.

Ninth Judicial District Attorney Andrea Reeb, a special prosecutor in the case, asserted in her opening arguments Lujan knew he was breaking the law at the time, knew he was helping a felon and put other law enforcement officers in a bad situation.

“It’s definitely a difficult time in this day and age for law enforcement,” Reeb said.

Lujan is one of those bad apples, she argued.

Defense attorney Robert Jason Bowles countered Lujan was merely doing his job that night and had no knowledge of the charges against Chacon at the time: aggravated fleeing from law enforcement and aggravated assault with a deadly weapon.

“He’s not a bad apple, I’ll tell you that,” Bowles said of Lujan. “... All the sheriff did, as the elected sheriff of this county, all he did that night was go out and do his job.”

Lattin had seen part of the chase earlier that night but didn’t realize the vehicle was driven by Chacon, he said. He emphasized Chacon and Lujan were friends and would talk often.

While he was speaking with Lujan that night, Lattin said, “We talked about what was going on, and the sheriff said he was sick and tired of the Española Police Department illegally pursuing Chacon in the city.”

A call came in on Lujan’s phone through the Bluetooth in his vehicle. Lujan rolled up his window partly, but Lattin said he heard the caller say, “Hey James, this is Phil,” and they discussed the pursuit.

After the phone call, Lattin said, he was instructed by the sheriff to follow Lujan and to “not say anything” — something he would hear nearly 30 times again after that night, he testified.

Lujan led Lattin to Chacon’s home so Lattin could help serve a restraining order requiring him to leave the premises, the former deputy said.

After serving the order, Lattin saw Chacon emerge from the house with a duffel bag and get into Lujan’s unmarked patrol vehicle, he said.

Lattin said he believed Chacon should have been taken directly to Española police.

But he said he feared for his job if he reported the incident.

In opening arguments, Bowles questioned Lattin’s credibility, given an incident at his first job with the Taos Police Department in which Lattin was accused of lying about his military background. Those accusations were later dismissed by the New Mexico Law Enforcement Academy Board.

“Mrs. Reeb called him an honest policeman, but you’re going to hear evidence in this case that his own police colleagues said he lied,” Bowles said. “Take that into account when you evaluate Cody Lattin’s testimony to determine, to use [Reeb’s] expression, who’s a bad apple in this trial.”

Bowles argued Chacon was the only person who committed a crime the night of March 14, 2017.

Bowles had filed a subpoena for personnel records on Lattin, who is a U.S. Army veteran and served as a deputy in Rio Arriba and Santa Fe counties and a police officer in Portales.

Attorneys for the cities of Española and Portales argued in a hearing last week that personnel records are generally exempt from public records requests. But District Judge Kathleen McGarry Ellenwood said Lattin’s “credibility is absolutely an issue.”

She ordered the attorneys to deliver Lattin’s personnel records to her Friday and said she would make a decision by Tuesday.

Court records show her ruling on the issue has been sealed.

Lujan, who is connected to another case involving Chacon, remains sheriff but has lost his authority to carry a gun, drive a police vehicle or make arrests.

Prosecutors say Lujan showed up drunk at Chacon’s house one night in March 2020 as police were executing a search warrant and tried to take over the operation from local officers and New Mexico State Police.

Lujan also has been named a defendant in a number of lawsuits, including some accusing him of civil rights violations, sexual harassment and racism.

All sheriffs in this county have been Democrats. I'm just saying.

Well, maybe he can bunk with the other RA County Sheriff that's in prison, desperately seeking reasons to be let free. Can't think of his name, but it's a notorious Northern NM mob family.

I wish the SFNM would concentrate with everything wrong with Santa Fe. I'm sure the reporters would stay busy. By reporting on the neighboring cities and counties they are deflecting what's wrong in there own city/county.

Corruption from the top down. Notice how Lattin is a 'former' Espanola police officer. His credibility being picked apart and on display because he told the truth. Lujan remains sheriff although he's been neutered. He says he did nothing wrong or illegal, while commanding all of his subordinates to say nothing of his actions. He's looking guilty and corrupt, giving a black eye to the whole department. Even if Lujan is ejected, the department is so deeply embedded in corruption, that very little would likely change. The baton will just be passed to the next one who will further the corruption.

I know at least one sheriffs deputy that is honest and serves for the people, Randy Sanchez, he started out as a paramedic serving the people and worked his way into the Sheriffs Dept. He comes from a family of law and order his brother Dan Sanchez was a Judge in Santa Fe until he retired. So I take exception of painting with a wide brush that the whole dept. is corrupt. I think on the most part everyone wants to do what's right and with the right leadership that is what you will get.