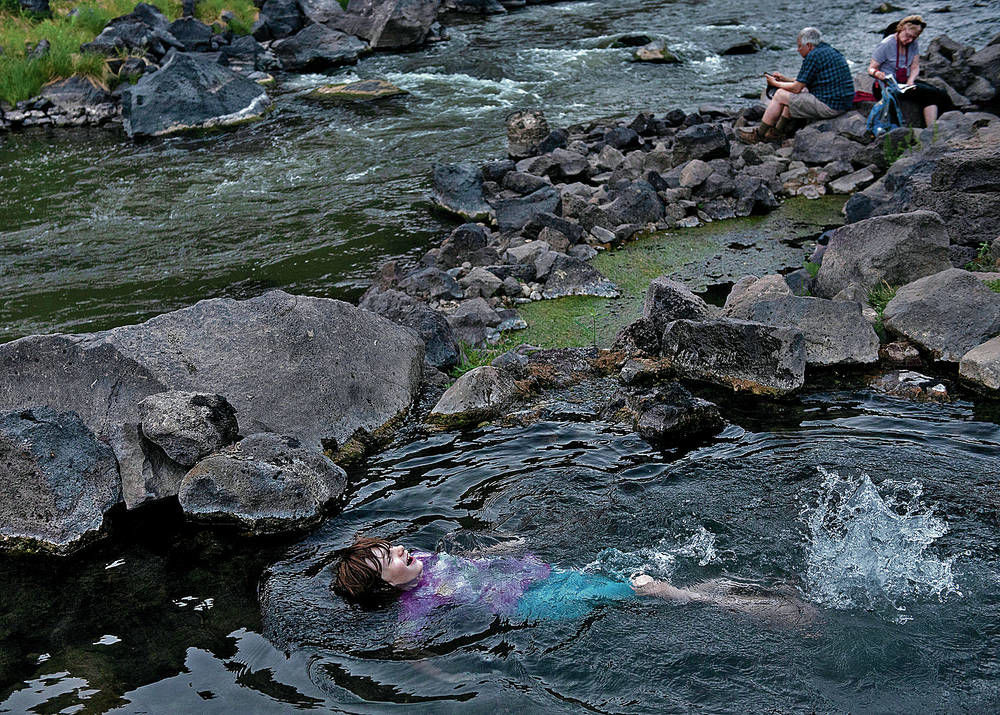 Elektra Cognito, 8, of Ojo Caliente, swims in the Manby Hot Springs near Taos. 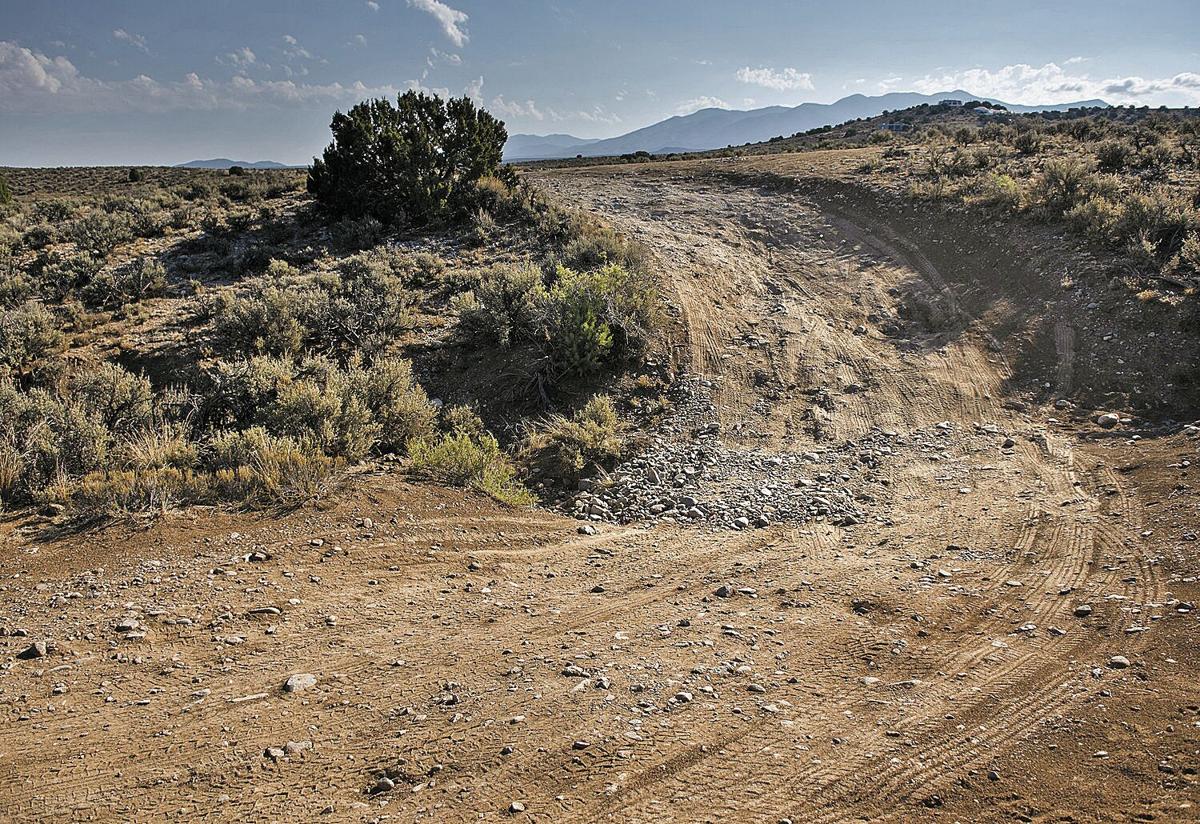 The private, unpaved Tune Drive, seen in 2018, is a widely used route to Manby Hot Springs near Taos, creating problems for the neighbors who pay to maintain it. The homeowners have posted a sign redirecting traffic, to no avail, and even considered gating the road. 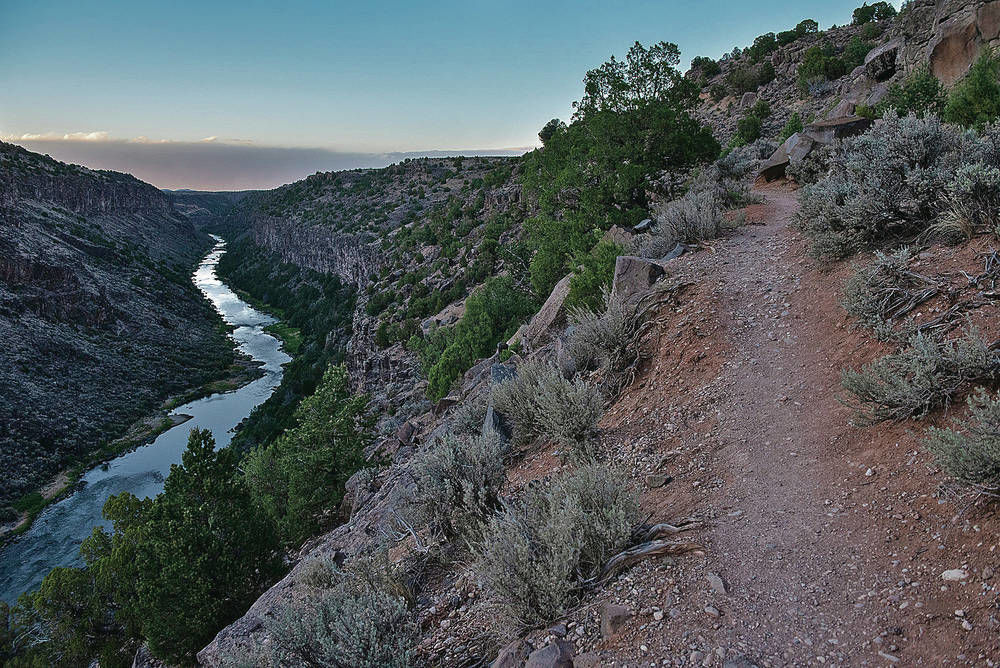 A hiking trail leading down to the Manby Hot Springs, seen in 2018, runs parallel to the Rio Grande.

Elektra Cognito, 8, of Ojo Caliente, swims in the Manby Hot Springs near Taos.

The private, unpaved Tune Drive, seen in 2018, is a widely used route to Manby Hot Springs near Taos, creating problems for the neighbors who pay to maintain it. The homeowners have posted a sign redirecting traffic, to no avail, and even considered gating the road.

A hiking trail leading down to the Manby Hot Springs, seen in 2018, runs parallel to the Rio Grande.

TAOS — A large sign at the entrance of Tune Drive off U.S. 64 warns drivers not to trespass on the unpaved, private road not far from the Rio Grande Gorge Bridge.

For decades, however, the road has been used by locals and tourists alike to access the increasingly popular Manby Hot Springs along the river, raising the ire of those who pay to maintain it. The festering issue had been escalating in recent years, with property owners grumbling their dirt road was becoming more and more impassable with heavy use and litter piling up.

The coronavirus pandemic made matters worse as people weary of being cooped up swarmed to outdoor recreation sites.

Thanks to a new enforcement promise from the Bureau of Land Management, an end is finally in sight for Tune Drive residents.

“Tune Drive has never been open to the public,” said Sherry Popham, a resident who serves as vice president of the Stagecoach Neighborhood Association, one of two groups fighting for the closure. “It has always been a private road that crosses property like mine.”

She lauds the BLM’s efforts to protect the springs. “Reclamation is essential before that point of no return is achieved,” she said. “It has been loved to near death.”

BLM spokeswoman Jillian Aragon said the “scenic easement” agreement between the Interior Department and George P. Tune, a developer who died in 2018, has never allowed for public access on the private road and was intended to protect the pristine nature of the area.

“Its purpose is for conservation, not public use,” Aragon said. “The scenic easement is on private property and does not allow for public access. Even if there were a county or public road, the scenic easement itself is not legally open to the public.”

Doug Daubert, president of the Stagecoach association, said many homeowners “actually own to the middle of the road. … They’ve had to carry extra liability insurance on their properties because people are driving down their road.”

Daubert said the road has become “impassable unless you have a four-wheel drive — God forbid if it’s rained or it’s been snowing out.”

The issue came to a head in recent years, he said, “because of the degradation that was happening at Manby Hot Springs, and the volume of traffic that was coming down there.” He said on one random winter day, he and his wife passed 37 people in 45 minutes.

When they first moved to the area, “you could go down to the hot springs, and you could be there on a Christmas Day and be by yourself. Now, you can’t go down there without hordes of people,” he said.

Andrew Yates, the acting manager of the Hondo Mesa Community Association, another group pushing for the road closure, said he saw an uptick in tourist traffic amid the coronavirus pandemic. “It’s gotten really bad since COVID began, and the whole ‘van life’ movement,” he said. “We’ve had a surge of people, mostly from out of town and out of state, just driving on the roads here to get to the hot springs and then camping out there.”

Camping has always been strictly prohibited at the site.

Daubert said petroglyphs in the area have been defaced with graffiti and trees have been cut for firewood, possibly by people camping out near the hot springs for days or weeks at a time.

Doug Wingo, a Tune Drive resident, said most of the tourists he has talked to simply don’t know the rules.

“They don’t know it’s private property,” he said. “That’s the big part. That’s the whole issue about this — public education.”

He added: “People are driving cross-country just to come out to the hot springs. I have talked to a lot of the tourists who come out here and try to educate them on what’s going on.”

She hopes the county can be a partner in the restoration, facilitating conversations about how to protect the area while still allowing use of one of its prized gems.

“I like getting creative like that,” Brush said. “We know we have a problem, but we also have this treasure. Where do we meet in the middle to both protect and allow enjoyment?”

Chris Tucs, a local who made his first visit to the Manby Hot Springs 16 years ago, said he was upset when he learned Tune Drive access to the springs was being closed off due to degradation and disrespect.

“It kind of breaks my heart that people are trashing it and abusing it and not treating it right,” he said.

But not everyone is happy about the closed-off access to the hot springs.

In a message on social media, one person said they understand the problems caused by heavy use of the road and springs.

“At the same time,” the person wrote, “something else needs to happen that doesn’t involve denying access to pretty much everybody.”

The person wondered if there will be future ramifications at other popular sites in the area.

“If access gets closed down to this spring, what’s going to happen to the other spring? What happens to the John Dunn Bridge area? Does that become so overwhelmed that they have to close that off now too?” the message read.

“I’m not really sure what the answer is here,” the message continued. “It’s just kind of sad to see that this is the way it’s gonna go.”

A version of this story first appeared in The Taos News, a sister publication of the Santa Fe New Mexican.

To be fair, New Mexicans themselves are not exactly known for being respectful of public lands and packing out their trash. Blame it on the tourists and the “van life”ers all ya want, it ain’t gonna solve squat.

Spence Hot Springs is way overused and dis-respected. Google reviews regularly report all the trash and filth there.

I think San Antonio Hot Springs is not far behind Spence.

I cannot tell if Montezuma Hot Springs near Vegas is still closed. One reviewer commented two weeks ago about the Montezuma Springs, "I ABSOLUTELY love love love this spot. My last visit there however made me so sad. And I ended up with a car full of trash all the way back home. Pack it out people."

The population is growing. The heat of the cities drives people into the mountains where these springs are. And those using them are slobs. The pandemic has worsened things. I suppose the quality of both camping and natural hot spring soaking has been declining for decades now. How lucky I was to experience Spence Hot Springs before 2010, when most of the year, soakers tended to be pleasant caring people, and one could still find one's self alone there to take in the view and soak in the steaming spring.

For the hot springs off the Rio Grande and near Taos, I think the road owners made the right decision to shut down the road to the public.

Why not set up a pay box? $3 a car. Then all the money goes to maintenance for the road. I feel this is more trying to have private access than solve a problem. You know people are going to keep using the road or start carving new trails to the springs.

Great idea Jesse. Put up a sign to protect the springs too at the trailhead( where you pay $3 )and at the bottom.

"Please pack everything out. Protect the springs so all can enjoy forever". respect the homeowners on the road in by keeping the road trash free. Please pack out additional trash you see."

This way everyone wins. Put up a sign not allowing camping out there...and why.

Shutting down stagecoach springs is very sad. A sad day for Taos. A blow to the friendly community feel of Taos in my eyes to locals and travelers.

Homeowners please share the springs with everyone. (Make woodie Guthrey proud..this land is your land...this land is my land..everybody sing it) I can't believe homeowners own the springs..Or the road into it?...half the road on each side. That is so laughable in my eyes. Think about what you are doing homeowners. We can keep the area clean and pay for road maintenance..as a community..a family

and allow everyone to enjoy the springs forever..

Stagecoach hot springs is the heart and soul of Taos; for locals and travelers. I have met so many wonderful locals and travels there for decades...and had such great conversations; made so many new friends. We can make this work. Shutting down stagecoach is shutting down the community feel of Taos and the heart of Taos. I feel like this is an easy fix.

I was one of those trespassers 42 years ago. It was called Stagecoach Hot Springs. They weren't that hot and I got an infection and a case of tonsillitis there. My penance. Haven't been back since. One thing I'd like to know is how do trespassers "lose" their access if it truly wasn't theirs to begin with?

A classic example of open access to water ways thru private land, there is a long history of abuse and litter on private land.

Yep, the newly imported self intitleds, tourists and traditional ignorance and bad behavor......