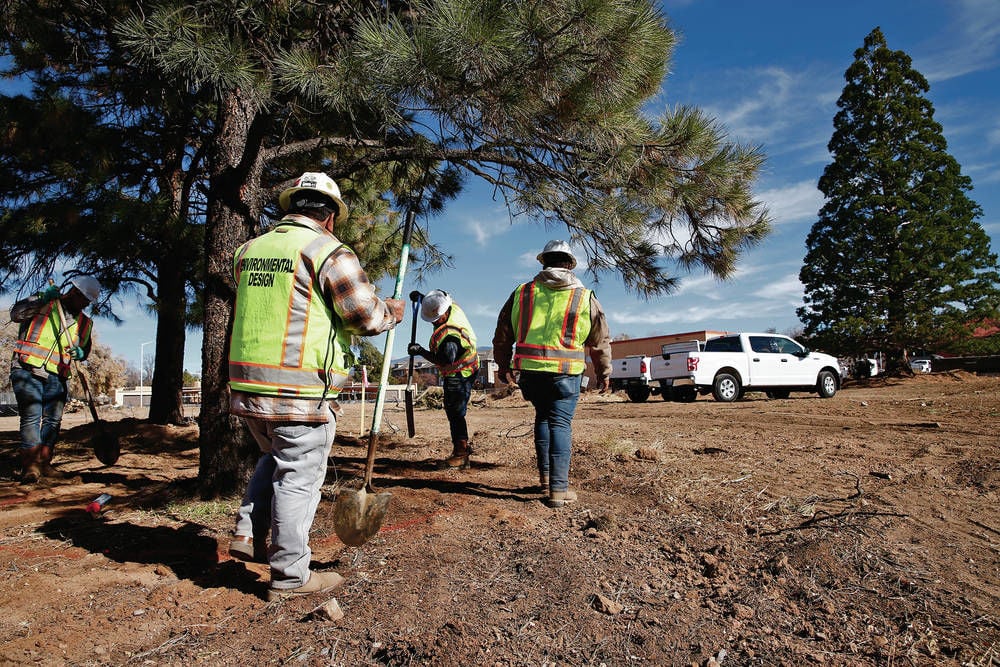 Workers from Environmental Design Tree Movers prepare Monday to relocate a sequoia tree, right, in preparation for the construction of La Secoya de El Castillo, a senior living community. The tree is only moving a couple of hundred feet, but the project is expected to take two weeks. Luke E. Montavon/The New Mexican 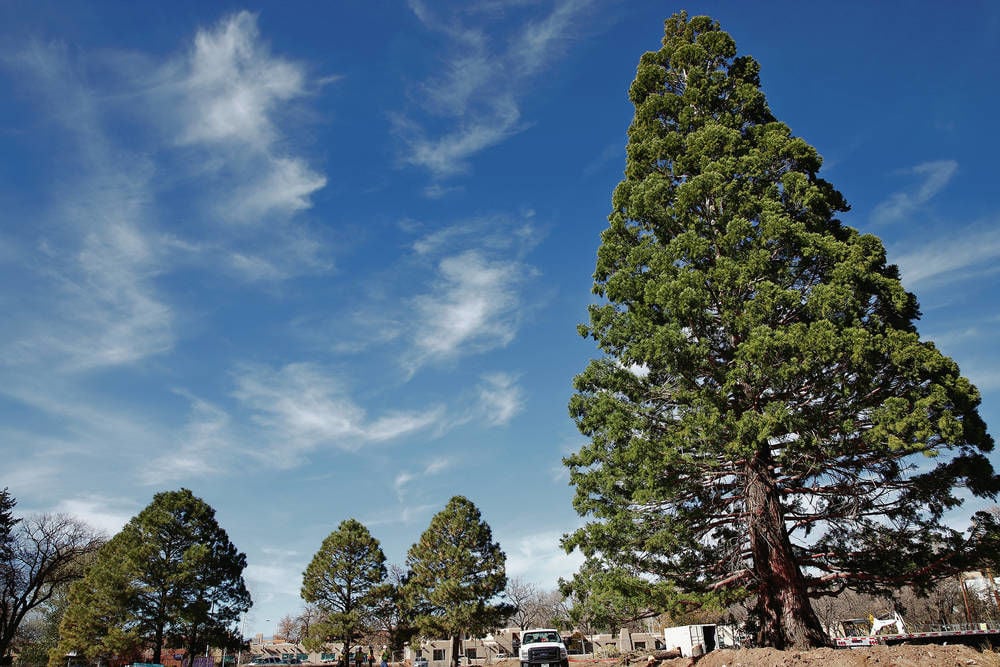 A sequoia in Santa Fe that’s about to be relocated is 70 feet high and 38 inches in diameter. David Cox, an official with the Texas firm that will transport the tree, estimates it’s between 80 and 90 years old. Luke E. Montavon/The New Mexican

Workers from Environmental Design Tree Movers prepare Monday to relocate a sequoia tree, right, in preparation for the construction of La Secoya de El Castillo, a senior living community. The tree is only moving a couple of hundred feet, but the project is expected to take two weeks. Luke E. Montavon/The New Mexican

A sequoia in Santa Fe that’s about to be relocated is 70 feet high and 38 inches in diameter. David Cox, an official with the Texas firm that will transport the tree, estimates it’s between 80 and 90 years old. Luke E. Montavon/The New Mexican

There is a trick to moving an eight-decade-old sequoia tree.

The long-anticipated relocation of a rare and famed downtown sequoia began Monday, and while its height (70 feet) and diameter (38 inches) are nowhere close to its more famous arboreal cousins in California, that doesn’t make the job any less stressful for David Cox, an official with the Texas firm that will transport the tree 200 feet south and 100 feet west.

“When it comes to really big ones, [I’ve moved] probably three or four,” said Cox, western region vice president at Environmental Design Inc., a Texas firm that lists treemover.com as its web address. “This is a really big one.”

Monday’s start is just the beginning of what likely will be a nearly two-week process for the sequoia, which is being relocated within the grounds of the future La Secoya de El Castillo, a 68-unit senior independent living community that will be built on a 2.52-acre property at the corner of Paseo de Peralta and Old Taos Highway.

The tree will move diagonally from its current location and become, if possible, even more noticeable.

“It’s going to be a prominent feature,” Cox said. “People will always notice it driving by there.”

The tree stands where an underground garage will be constructed, but first things first: Extensive preliminary work must be done before the painstaking relocation, Cox said.

“We will move the tree in the first part of Thanksgiving week,” Cox said. “I think the tree will be in the new location prior to Thanksgiving.”

Cox said the sequoia work will start with its root system, which can extend 60 to 80 feet from the trunk.

“The structural roots are the bones,” he said. “The feeder roots — the bloodstream of the root system — can grow and die and grow and die.”

Cox will preserve the structural roots and cut off the feeder roots to end up with a 30-foot diameter root ball that with the embedded soil will weigh upward of a half-million pounds. The root ball will be wrapped in a layer of burlap and a field fence.

Digging out the roots will allow Cox’s team to build a steel platform underneath the tree. This will be made of 36-foot-long, 7-inch wide steel pipes. The platform will remain permanently attached when the tree arrives at the new location.

“That’s probably $20,000 worth of steel getting planted with the tree,” Cox said.

The entire cost of moving the sequoia and two ponderosas is $175,000, said Colleen Gavin, a principal in the Santa Fe project management firm JenkinsGavin, which is representing La Secoya de El Castillo.

Five layers of air bags, each 3 to 4 inches thick, will be inserted under the platform and inflated to three feet thick with the tree rising with the bags.

The tree will be towed with excavating equipment, employing a similar technique used to build the pyramids. An air bag will be placed in front of the tree. When the tree is moved over that air bag, the air bag left in the clear at the rear will be removed and brought to the front, he said.

The tree will not fall over because the root ball is so massive that the tree itself is anchored upright, Cox said, though it seemed to be the Leaning Tower of Santa Fe on Monday.

A ramp will lead the tree into its new hole. The same dirt dug up from the original location will be packed around the tree. Perforated irrigation piping will be installed around the circumference.

A trench will be dug under the steel pipe platform to remove the deflated airbags.

If that seems like a lot of detail, well, it’s a detail-oriented operation.

Two years ago, Cox moved a 110-foot solo sequoia in Boise, Idaho, to make way for a hospital expansion. Scientific American magazine and other national media wrote about the move.

Al Jahner, the CEO/administrator at El Castillo, read the Boise stories and called Cox about that time to ask him to move the El Castillo tree.

“The one thing we did in Boise that we are going to duplicate in Santa Fe is when we excavated around the tree, we saved all the soil around the root system,” Cox said. “We put the original soil under the tree. We are recreating the same environment that the tree was surviving in. When you get to big trees like this, you don’t want to have a failure.”

Cox, who estimated the tree is between 80 and 90 years old — “I’m just guessing, it could be more” — said sequoias are as tough as trees get. The tallest goes 316 feet; the widest 31 feet. They are able to survive fires and whatever else, to live hundreds, even thousands of years. But they never move from their original location. Moving these younger sequoias is still something of an experiment.

Cox told Scientific American he lost some sleep over the move in Boise.

But with a system in place, he’s ready for Santa Fe.

I have often wondered if there is a story behind Santa Fe's sequoia trees. There are a number of them in our city and they appear to be of similar age. Was there a Johnny Sequoia Seed in our past?