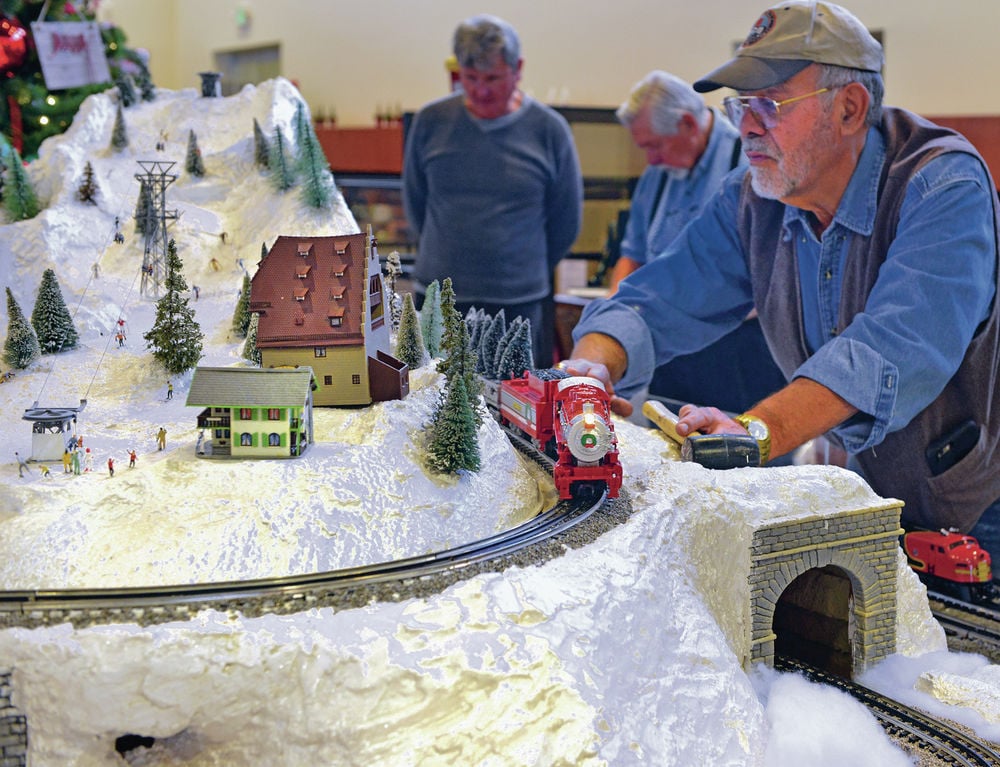 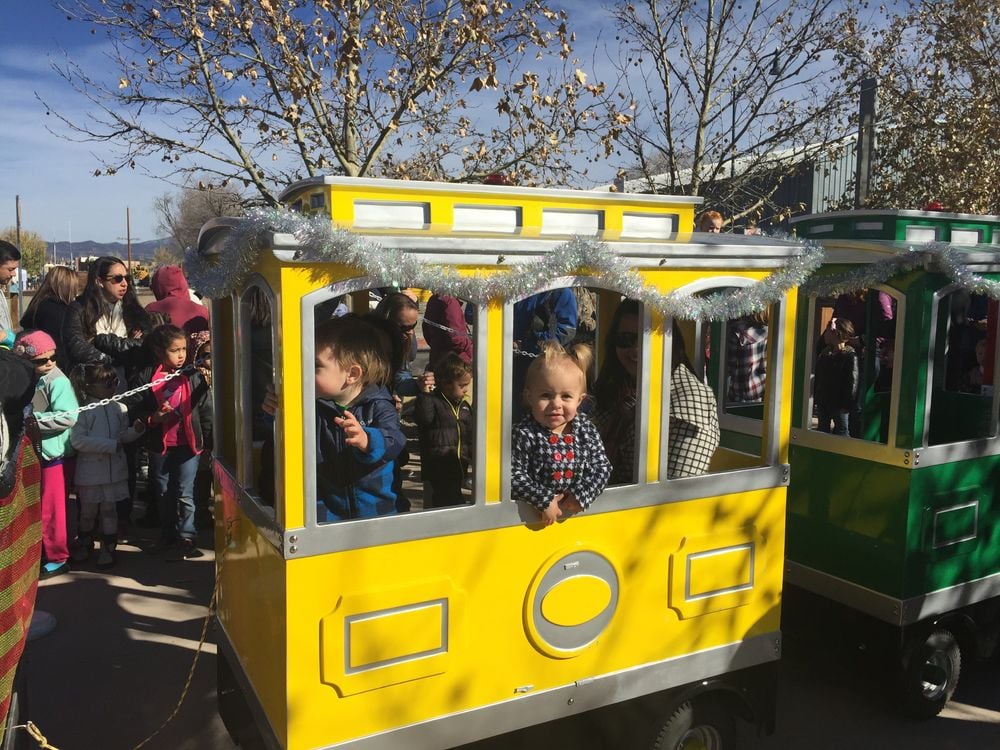 Maya Lucero enjoys her train ride Saturday at the Santa Fe Railyard. The Rail Runner and members of the Santa Fe Model Railroad Club teamed up with Meow Wolf and other organizations to create a Santa’s Village. Among the activities were model railroad exhibits and a mini train that children could ride. Robert Nott/The New Mexican 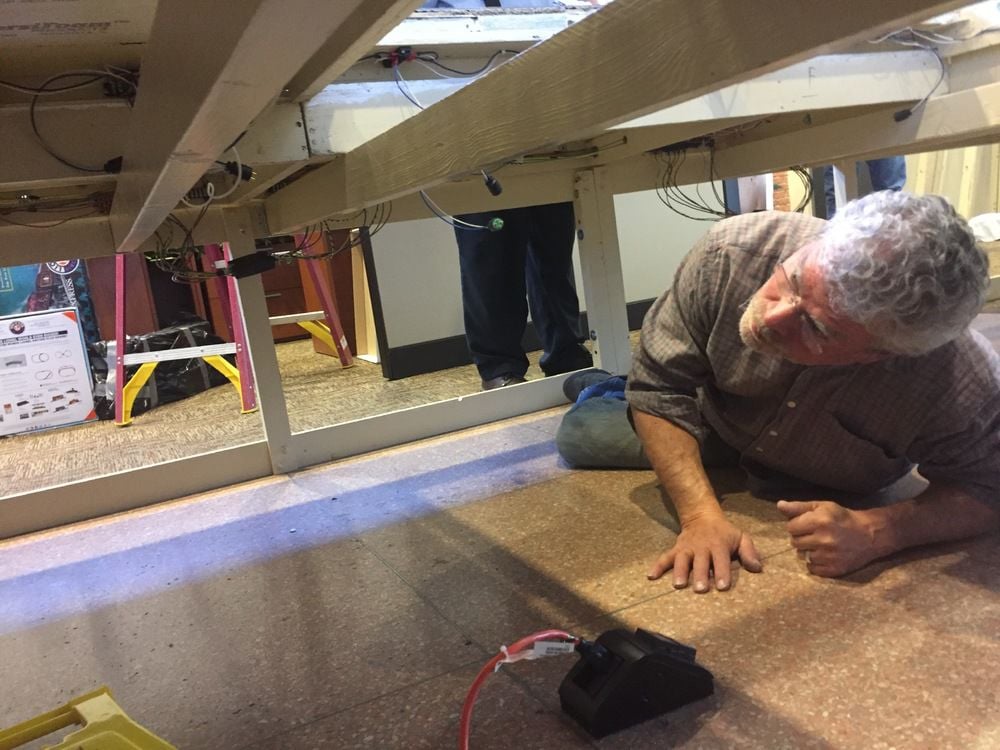 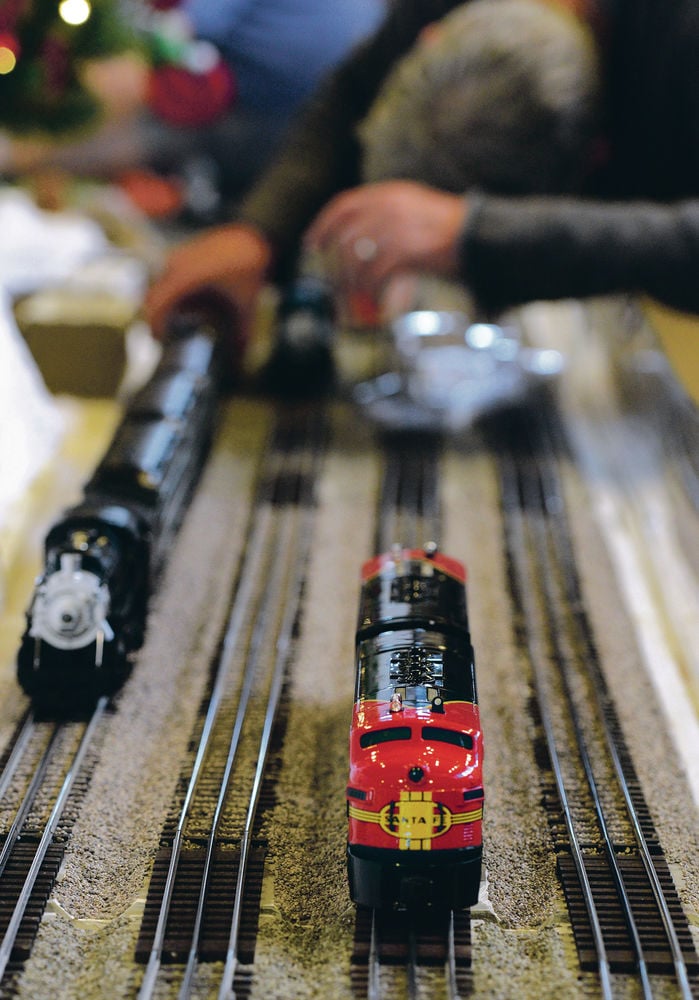 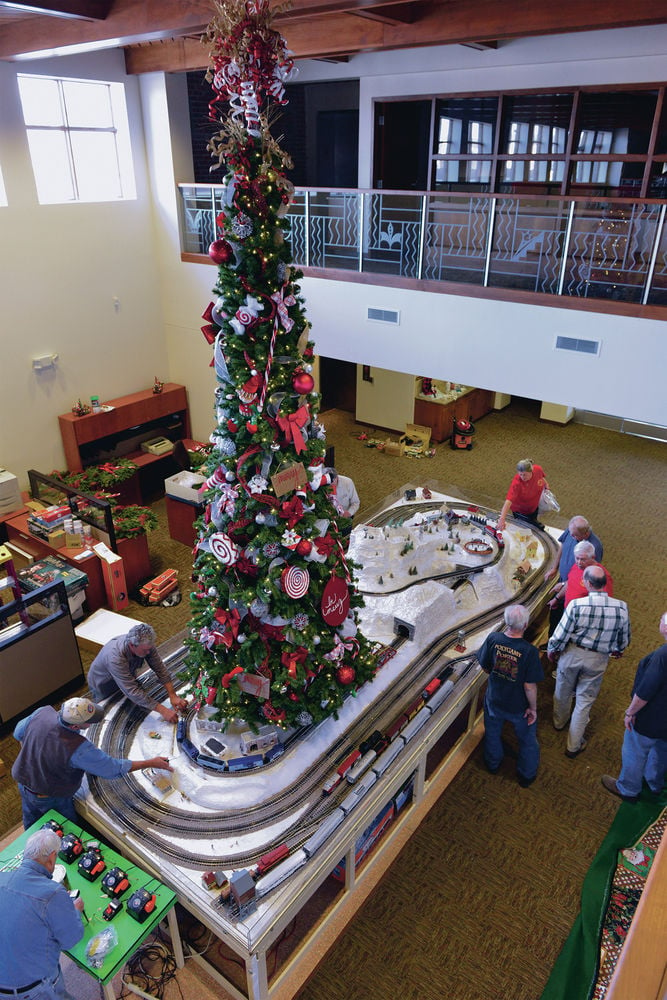 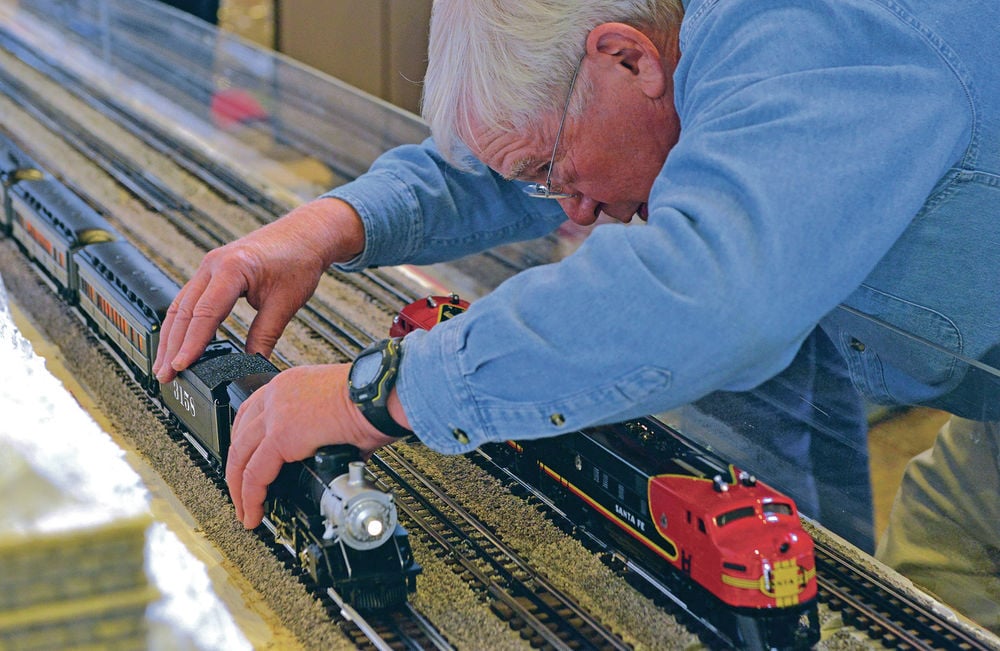 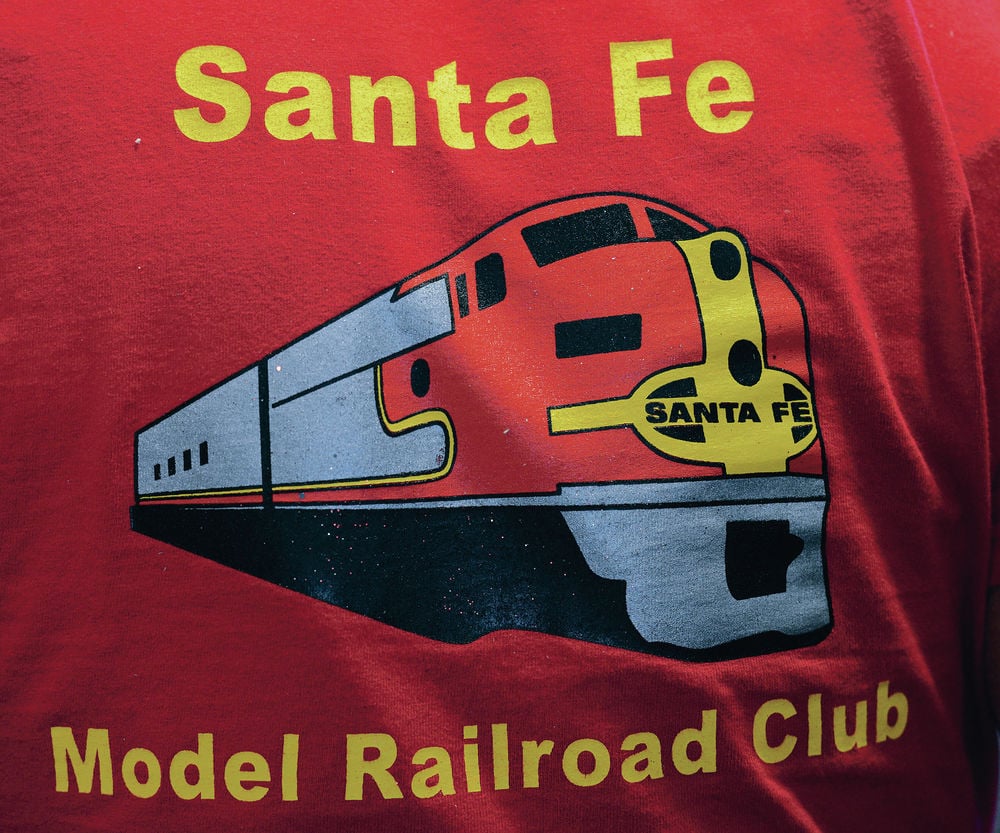 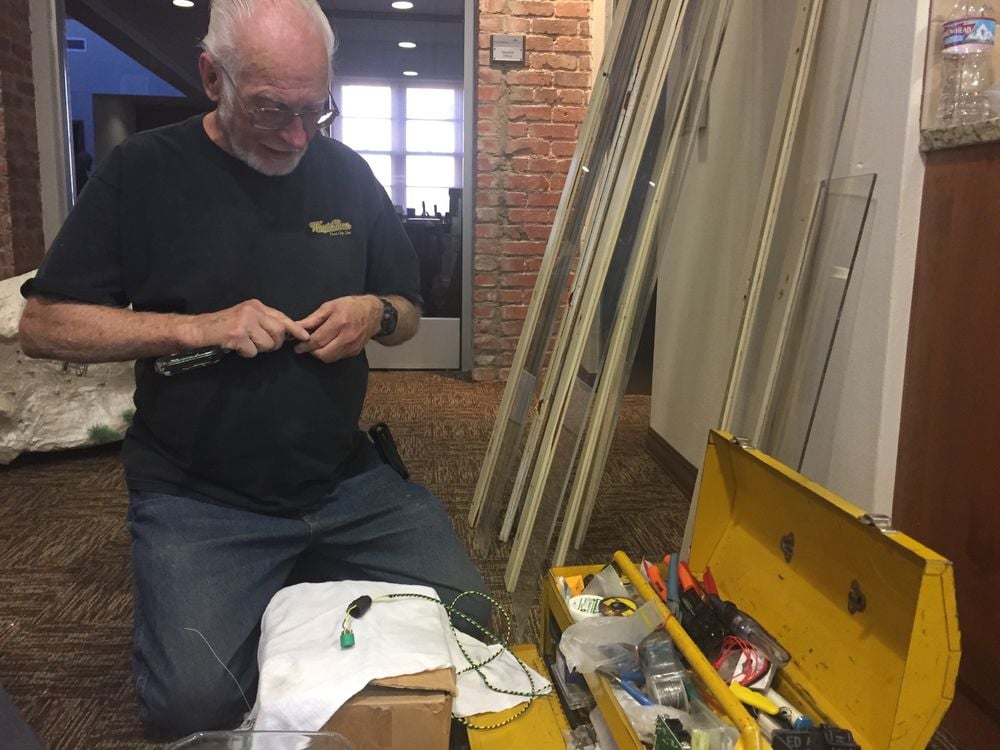 Maya Lucero enjoys her train ride Saturday at the Santa Fe Railyard. The Rail Runner and members of the Santa Fe Model Railroad Club teamed up with Meow Wolf and other organizations to create a Santa’s Village. Among the activities were model railroad exhibits and a mini train that children could ride. Robert Nott/The New Mexican

The enclave of workers gathered Saturday in Santa Fe easily could have been building machinery in a Midwestern factory.

“Bolts, who has the bolts?” one asked.

“I need a mallet,” quipped another.

“Whose got the ratchet? My ratchet’s floating around here somewhere.”

The construction chaos was actually taking place inside the lobby of the city’s oldest bank as members of the Santa Fe Model Railroad Club gathered to assemble an annual holiday model train exhibit at First National Santa Fe, just off the historic Plaza.

“It’s the same thing every year,” said First National security officer Martin Lobato. “ ‘This doesn’t work. Don’t we have another box of bolts? Whose got the mallet?’ ”

For 25 years, the club has been putting together the model train village that circles a decorated Christmas tree. But the bank’s train tradition is much older. It began in 1950s and has survived a bank merger and a major lobby remodel, when the popular display was temporarily moved to space inside a state museum.

No one knows precisely what it is that draws both children and adults to train displays at Christmas time, but the tradition dates back more than a century. In the late 19th century, train-like toys began appearing as Christmas gifts. Model trains later began to figure prominently in holiday displays, often set up around trees, like the First National exhibit. A train is also featured in the beloved, decades-old holiday children’s book and 2004 movie The Polar Express, about a boy who doubts the existence of Santa Claus until he ends up boarding a train for the North Pole on Christmas Eve.

Several railroad companies that provide tourist excursions have developed their own Polar Express promotions in which children can ride in pajamas, including the Durango & Silverton Narrow Gauge Railroad in Durango, Colo. The Cumbres & Toltec Scenic Railroad, a narrow-gauge excursion train in Chama, also offers a Christmas-themed ride during the holiday season.

The New Mexico Rail Runner Express is considering a similar promotion in the future, said Augusta Meyers, a spokeswoman for the commuter train between Belen and Santa Fe. “Anytime we involve the train at Christmas, people love it,” she said.

The model train show at First National is so popular that for the first time ever, the bank will open on a Saturday this season — Dec. 17 — just so families in the community can stop by and see the display.

While some 20 Model Railroad Club members were helping with the setup at the bank, other club volunteers were at the Santa Fe Railyard on Saturday, working on a model train demonstration that was part of a joint holiday event with the Rail Runner — a sign that the Christmas season in the city was heading into full swing.

The Rail Runner and the railroad club teamed up with Meow Wolf and other organizations to create a Santa’s Village. Among the activities were model railroad exhibits and a mini train that children could ride.

Michael Jiron, an employee of the Rail Runner, expected Saturday’s crowd to reach “in the thousands” by the time it ended.

Over at First National, Alana Light said watching the tiny train took her back to her childhood. “My dad had a train around the Christmas tree when he was a little boy, so it’s exciting to be part of this project,” she said.

Light, of Ala Carte Design, decorated the tree in the bank lobby and put up ornaments. She created her own challenge for children who visit. “See if you can find the Santa in the tree — it’s like find Waldo,” she said.

One of those volunteering to set up the train display was Steve Meyer, a retired state employee. He spent most of the morning crawling under panels to connect wiring and bolts.

“I had train sets since I was 4 or 5. I still have my old train sets,” said Meyer, who also has participated in Model Railroad Club events at the Santa Fe Children’s Museum and the county fairgrounds. He has three young children, he said, and he takes them on the scenic train rides that operate out of Durango and Chama.

It was two bank employees, Antonio Romero and Don Van Soelen, who set up the first train exhibit at First National in the mid-1950s. The tradition grew until 1991, when the last employee who knew how to assemble the panels was set to retire.

Enter the Model Railroad Club, which agreed to find volunteers and assume the project.

Club members started their day at 8 a.m. Saturday. They pulled boxes and 13 panels from the bank’s basement and began patching together the 8-foot by 20-foot display table. Tracks are already attached to plywood, and each is numbered.

“It fits together like a puzzle, ” said club president Edward Williams, whose grandfather was a commuter train engineer in Chicago and used to sneak him into the cabin. “I was hooked,” he said.

Every year, something has to be changed or fixed. If one section of track doesn’t work, the entire exhibit shuts down.

On Saturday, the wiring for a section that moved the train through a ski lift village had come apart, and Paul Enstrom was trying to diagnose the failing. The fittings had to be replaced. He stood by his toolbox, trying to match connectors.

“I have everything I need,” he said. But some of the plugs were from different manufacturers. “If it’s off just a hair, it’s not going to work.”

By 11 a.m., the group was getting ready to take a lunch break. They had several hours of work left before the track could even be tested. Then the scenery would be added and the trains set upon the tracks, ready for a curious public starting Monday morning.

“Someone have electrical tape?” asked one volunteer.

“Anybody have a wire nut?”

“This track is not flush. I can’t make it work.”

Bank executive Jennifer Lind said when the trains are running, it is her favorite time at work. Families come with their children. They look at the tree and the model train village, warming to the holidays.

“It’s really pretty incredible,” she said in a telephone interview. “It’s one of my favorite times of the year because I get to hang out in the lobby. And it isn’t just little kids, it’s their grandparents.”