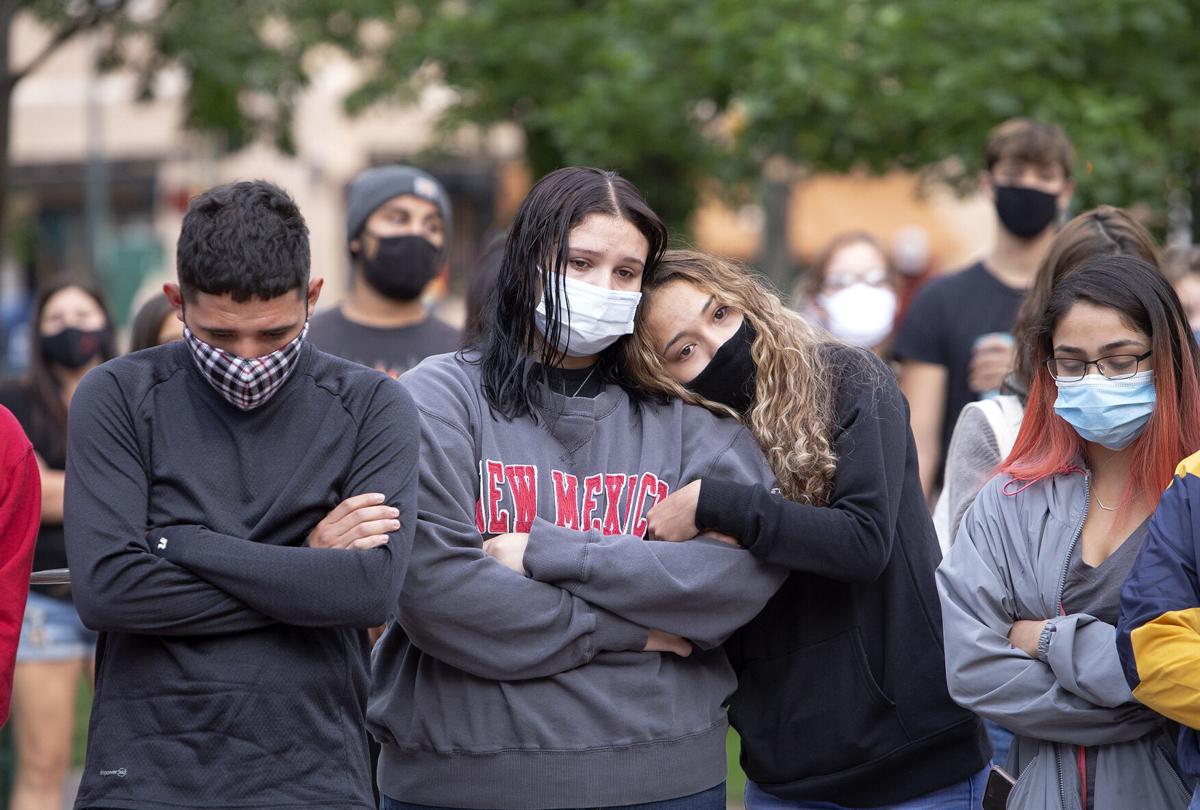 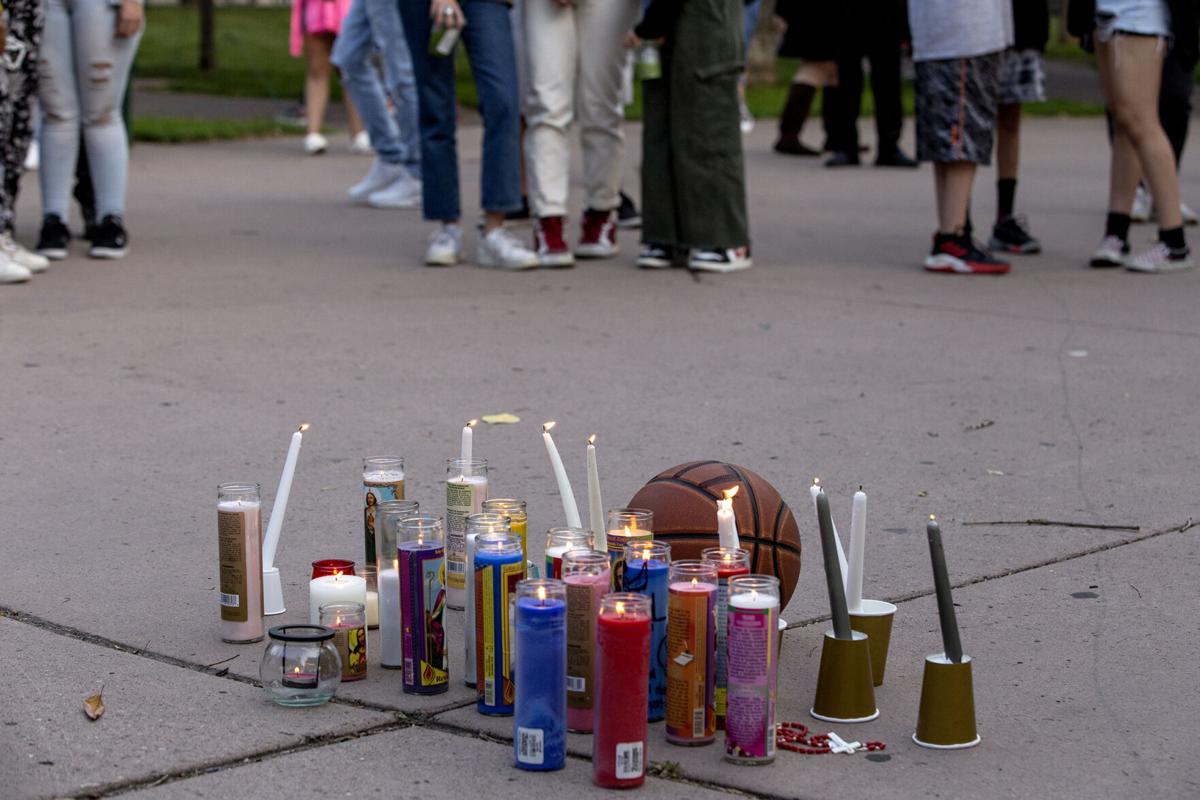 Friends gather for a vigil Sunday on the Plaza for Fedonta ‘JB’ White, the 18-year-old basketball player who was killed early Saturday morning. 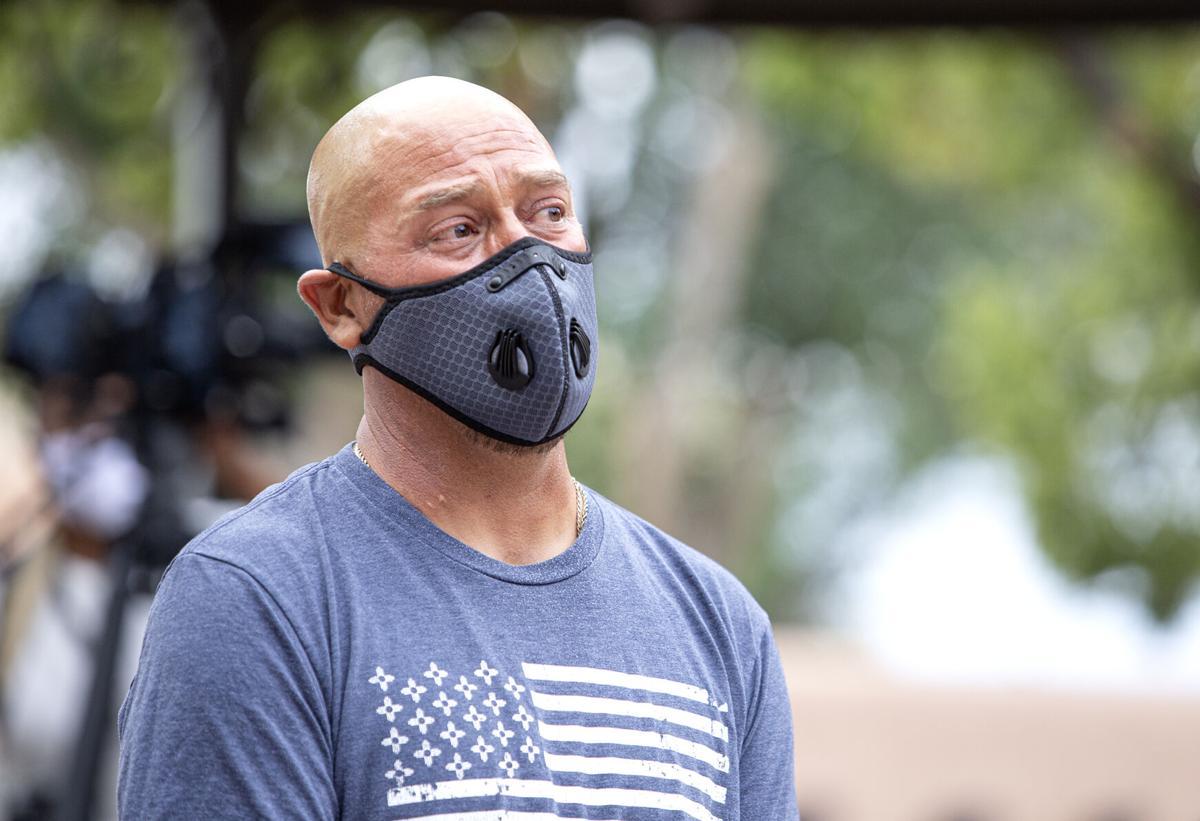 Mark Rodriguez speaks Sunday at a vigil for JB White. He spoke about the sadness of students seeing their classmates dying due to gun violence and about living their lives to the fullest. 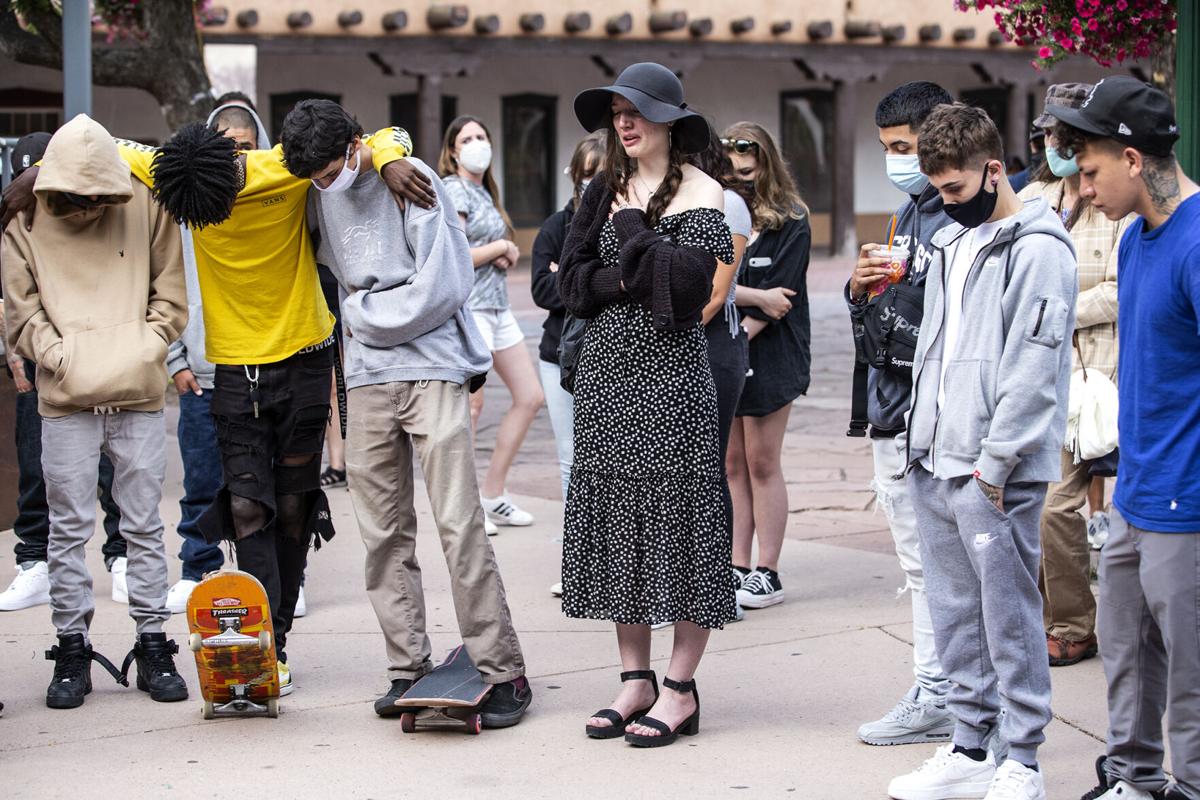 Friends gather Sunday for a vigil for Fedonta ‘JB’ White on the Plaza. 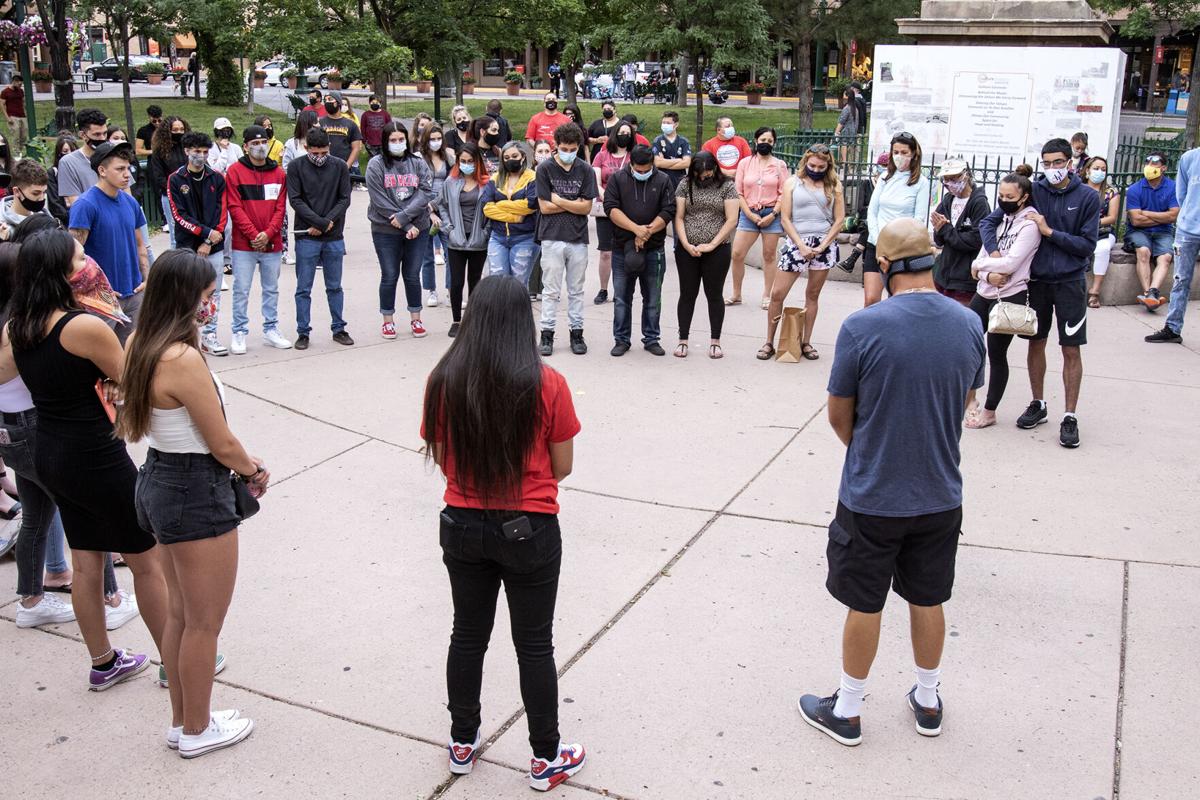 Friends gather Sunday for a vigil for Fedonta 'JB' White on the Plaza.

Friends gather for a vigil Sunday on the Plaza for Fedonta ‘JB’ White, the 18-year-old basketball player who was killed early Saturday morning.

Mark Rodriguez speaks Sunday at a vigil for JB White. He spoke about the sadness of students seeing their classmates dying due to gun violence and about living their lives to the fullest.

Friends gather Sunday for a vigil for Fedonta ‘JB’ White on the Plaza.

Friends gather Sunday for a vigil for Fedonta 'JB' White on the Plaza.

The last words from Fedonta “JB” White’s mouth as paramedics loaded him into an ambulance were “I love you” to his girlfriend, cousin and a few friends, according to an eyewitness.

Chris McKnight, a 20-year-old who first met White in middle school, said around 70 high school and college students were at a party at a house under construction in the Tesuque/Chupadero area when a fight broke out.

As he was leaving, White exchanged shoves with another student, who then pulled out a handgun and fired one shot that hit White below his right shoulder and did not exit his back, McKnight said.

“I asked him where he was hit, and he pointed to his shoulder. I felt it with my hand and started screaming for a clean towel to put over the bullet hole,” said McKnight, who will start classes later this month to become an emergency medical technician at Santa Fe Community College. “I put the towel on the bullet hole and pressed. He didn’t lose no blood.”

After the shooting, four friends loaded White into a car and drove him to a highway exit in Tesuque, where they met paramedics around 4 a.m., McKnight said.

White was still alive and talking.

“He said, ‘Put me in the car. Put me in the car and take me to the hospital or else I’m going to die, bro,’ ” McKnight said. “When I last saw him, he told me he loved me. He said he loved everyone. He said ‘I love you,’ to everyone as he went into the ambulance.”

McKnight said he and four or five others followed White to Christus St. Vincent Regional Medical Center, but he did not find out White had died until later that morning.

Authorities arrested 16-year-old Estevan Montoya, who students say attended Capital High School, and charged him with first-degree murder in connection with White’s death. A spokesman for the Santa Fe County Sheriff’s Office said a criminal complaint with more details about the shooting and arrest will be available Monday.

McKnight and others who were at the party said they weren’t sure if White and Montoya had a prior relationship.

“I know Estevan. I didn’t know he would shoot someone,” said Seth Arroyos, a recent Capital High graduate who said he was at the party but left before the shooting. “I saw them say ‘what’s up’ to each other at the party, but I’m not sure if [White and Montoya] had a relationship.”

A few hundred people took part in a vigil for White on Sunday night on the Plaza.

White graduated early from Santa Fe High over the summer with plans to play basketball at the University of New Mexico this fall. A top 100 recruit nationally, White spurned more successful programs to become a Lobo.

Now the most-prized basketball recruit to come out of the City Different in recent memory is the third teenager in Santa Fe to be killed this summer.

On July 15, 17-year-old Ivan Armando Perez Chumacero, a rising senior at Capital High School, was shot and killed during a fight outside a south-side apartment complex. On June 5, Aiko Perez, a recent graduate of the Academy at Larragoite in Santa Fe, was fatally stabbed by a friend who told police he was under the influence of LSD.

“In the span of a few months, three of my friends have gotten murdered. This is too much,” said T.J. Sanchez, a recent Capital High graduate who joined White on the Class 5A All-State team following this past season. “What set JB apart was his competitiveness. We met in second grade, and it felt like we were in the gym playing everyday.”

Dax Roybal, who directs youth basketball programs at the Genoveva Chavez Community Center, said he is worried there is a connection between the increase in violence and loss of extracurricular opportunities during the pandemic.

“I’ve never heard of this happening to three kids so quickly like this,” said Roybal, whose father Lenny Roybal used to coach basketball at Santa Fe High. “I’m not going to blame it on COVID, but we usually have 500 kids in our summer basketball league. Maybe if we had some of these kids in the gym every day like we always did, we could have saved at least one of them.”

On Sunday night, teenagers shocked by violence lit candles for a makeshift memorial. One mourner added a basketball to the tribute. Others asked for a stop to it all.

“I would spend every day with JB at the Chavez Center practicing our game. I know Ivan, too. I knew Aiko. They’re all gone now,” said Arroyos. “It’s time to put the guns down. No way a 16-year-old should ever have a gun.”

I'd like to know who the s*** head is that keeps leaving a laughing emoji in response to these articles. You're a weak person if you can only post that stupid s*** on here, where no one can see who you are. Rest in peace June Bug

Such a tragic and senseless end to a young man with so much promise who had overcome so much. Heartfelt condolences to his loved ones, his friends, and the community who will miss him. (Ran across this article posted about a while ago about this extraordinary young man. https://www.santafenewmexican.com/news/local_news/love-conquers-all-for-santa-fe-high-hoops-star/article_f4b9cf78-9475-5bb1-aa42-757b4dc3d851.html)

Suspect in J.B. White’s murder has a history of violence

I really hope these kids and witnesses at the party start to speak up to detectives. From what I’ve heard about the party is that it was all peaceful till Montoya and his gang crashed it. I heard that they were picking fights with everyone, doing cocaine, and they all had guns. Montoya allegedly pistol whipped another kid at this party before he killed JB. These goons were instigators that came to the party looking to cause trouble. The court system needs to make an example of this kid by giving him maximum punishment. He allegedly pulled a gun on a kid at school this year and shot at a parked car, police did nothing. He’s a danger to our youth

My sincere condolences to the family and loved-ones of JB White, and all those afflicted by gun violence.

While I do not oppose responsible adult firearm ownership, I've long exposed the wholly inept, cowardly -and murderous- ATF, the glorified gun peddling NRA that cunningly exploits the Second-Amendment, and the countless bought-and-paid for politicians who have fostered and created the bloody, lethal epidemic. Be clear: There is no agency, department nor association in "America" with an accurate accounting of guns - nor their owners.

Consequences, for a once-Godly blessed nation that has long sacrificed Everything, -even the innocent unborn- to it's true master: The Golden Calf of Capitalism.

Of course, we've all seen how well "America's" god has saved it from COVID -19 - and the heathen nation, ain't seen nuthin' yet.

All, for The Greater Glory of The Kingdom of Christ Yeshua/The House of David!

You have the wrong teen. Ivan was also killed by gun violence.

Wrong kid. Chumacero was killed earlier this summer. However Montoya and Chumacero were friends and fellow gang members. The real question is what are these kids gang banging for in Santa Fe? Their gang lost a life already, killed the greatest athlete from Santa Fe in generations, and now Montoya will be locked up for life potentially. That’s three young life’s lost, and families and friends mourning and grieving for the rest of their life’s. For what?? All cause some kids want to prove their gangster? Real G’s move in silence. Real Gangs have OG’s to keep the youngins in line and guide them. These streets don’t care about you kids as you can tell. In less than a month Mando died, JB died, and Montoya is facing life. Countless friends and families will forever be affected from these events. Enough is Enough, Mando and JB would want peace right now! and JB and his family deserves justice.

"A good start might be to hold our legal system more accountable for the way they handle violent criminals." You are wrong, Joseph. A better start would be not frequenting parties at 4 a.m., being nowhere near the presence of all these violent losers. Guess expectation too high.

So very sad. This young man was killed by a boy, yes. He was also killed by a gun. In 2017, the most recent year for which complete data is available, 39,773 people died from gun-related injuries in the U.S., according to the CDC. Guns turn impulsive moments by disturbed people, drunk and high people, and young people with undeveloped brains into death. In a sane society unsaturated by guns this would have been a few insults and a few punches. In this sense, all of us are responsible for this young man's death.

You are absolutely ridiculous. 👎

Like, what's ridiculous exactly? Demanding better gun regulations? Sharing concrete data to back up claims? Posting well thought out comments about a terrible and distressing situation, one that goes beyond this one young man's tragic death? Sorry, but the "thumbs down" emoji tells me nothing, and your pert comment comes off as, well, absolutely ridiculous in itself.