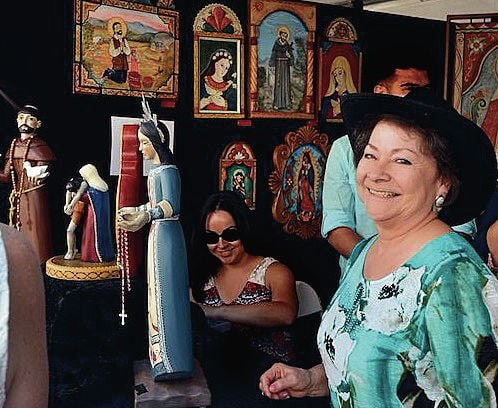 Lorrie Garcia, pictured in her booth during this year’s Traditional Spanish Market, says a retablo depicting St. Thérèse of Lisieux was labeled ‘sold’ when it disappeared from her booth Sunday morning. Courtesy photo 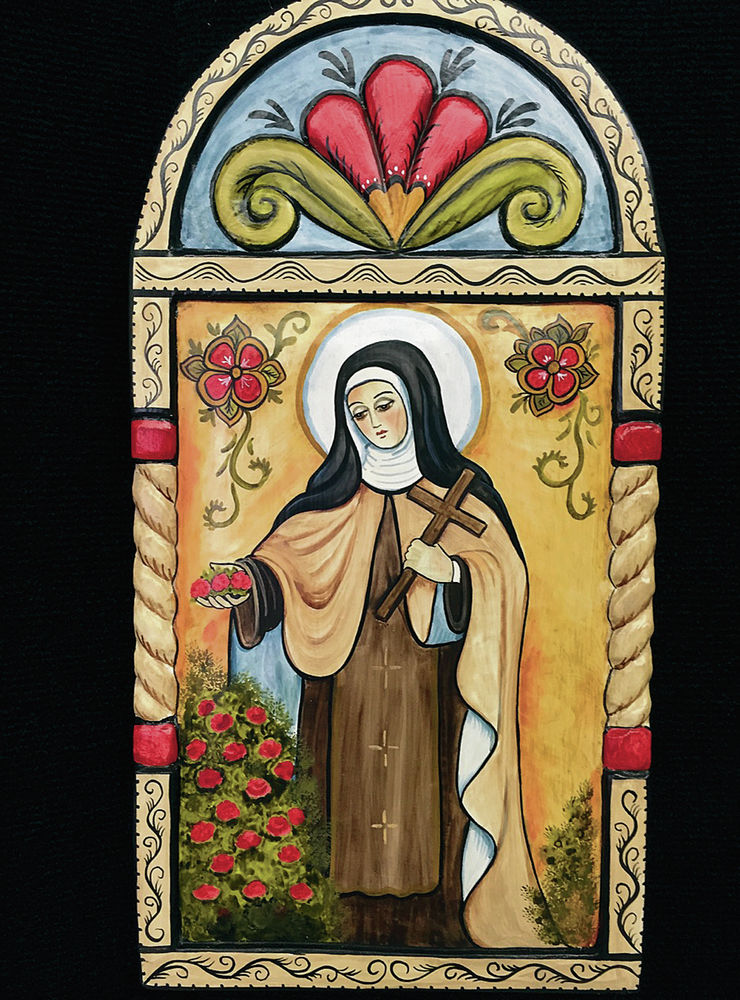 Lorrie Garcia, pictured in her booth during this year’s Traditional Spanish Market, says a retablo depicting St. Thérèse of Lisieux was labeled ‘sold’ when it disappeared from her booth Sunday morning. Courtesy photo

Catherine Robles Shaw turned her back for just a moment Sunday while speaking with visitors at her booth on the Plaza during the Traditional Spanish Market, where she has exhibited and sold her Colonial artwork for two decades.

When she turned around again, she noticed an empty spot among the religious paintings she had displayed. Our Lady of Peace had disappeared.

Robles Shaw and two other well-known santeras — or “saint-makers” — suspect a thief swiped paintings from their booths during the annual event last weekend, making off with works valued at hundreds of dollars each and leaving the artists to wonder why anyone would steal religious icons. Word of the thefts spread on social media in the days following the market, eliciting a combination of outrage and sympathy for the artists.

“It’s beyond bad karma,” said Lorrie Garcia, an artist from Peñasco who has sold her work at the Spanish Market for 15 years.

Garcia’s 16-inch by 10-inch retablo depicting St. Thérèse of Lisieux was labeled “sold” when it disappeared from her booth Sunday morning. She didn’t notice her depiction of the 19th-century French nun was missing until the buyer, a friend from Las Vegas, Nev., sought to retrieve it.

Another artist whose retablo went missing during the event saw news of the other thefts on Facebook, leading her to believe that one of her pieces had been stolen, too.

Marie Romero Cash said she placed a retablo depicting Santa Barbara in a box with bubble wrap while she was tending to her booth. The bubble wrap remained, she said, but her painting of the early Christian martyr was nowhere to be found. She suspects someone pilfered it.

David F. Setford, executive director of the Spanish Colonial Arts Society, which organizes the Spanish Market each year, called the thefts of the artworks acts of disrespect. “It’s upsetting because this is how many of our artists live,” he said. “This is how they make ends meet.”

The Spanish Market has come to serve as a showcase for the area’s most renowned contemporary santeros, as well as artists specializing in other distinct Colonial art forms. Robles Shaw’s entire family, for example, makes religious artwork such as bultos and altar screens, along with retablos.

Painted on wooden panels, retablos are part of a tradition that took root among Spanish missionaries during the 17th century. While the missionaries used images of saints to help spread Catholicism to Native communities, retablos evolved into personal objects of veneration, and the art of retablo-making passed through generations.

While the Spanish Market — which included more than 230 artists this year — typically draws crowds to the Plaza, thefts of artwork at the show are unusual.

“I’ve never even had a bad check,” said Garcia, whose works can be found in churches, private collections and museums across the country.

Besides, Robles Shaw added, “these are saints.”

“Once in a while, someone will walk off with something little,” said Romero Cash, a renowned santera who created 15 Stations of the Cross at the Cathedral Basilica of St. Francis of Assisi in Santa Fe, an installation dedicated in 1997.

But none of the artists could remember the last time anyone stole a retablo.

“They must really need a saint,” Robles Shaw joked.

The santeras are not expecting to get the works back and did not immediately file police reports. But their social media posts served as an appeal for collectors and artists to be on the lookout if the retablos should re-emerge.

Sharing the images on its Facebook account, the Spanish Colonial Arts Society described the thefts as an unfortunate postscript to an otherwise successful event.

The thefts, Garcia said, are “a good wake-up call for the artists to be a little more vigilant.”

The Spanish Colonial Arts Society asks anyone with information about the retablos to call 505-982-2226.

Correction: This story has been appended to reflect the following correction. A previous version of this story incorrectly reported the year of Marie Romero Cash’s installation of the Stations of the Cross at the Cathedral Basilica of St. Francis of Assisi in Santa Fe. The installation was dedicated in 1997.