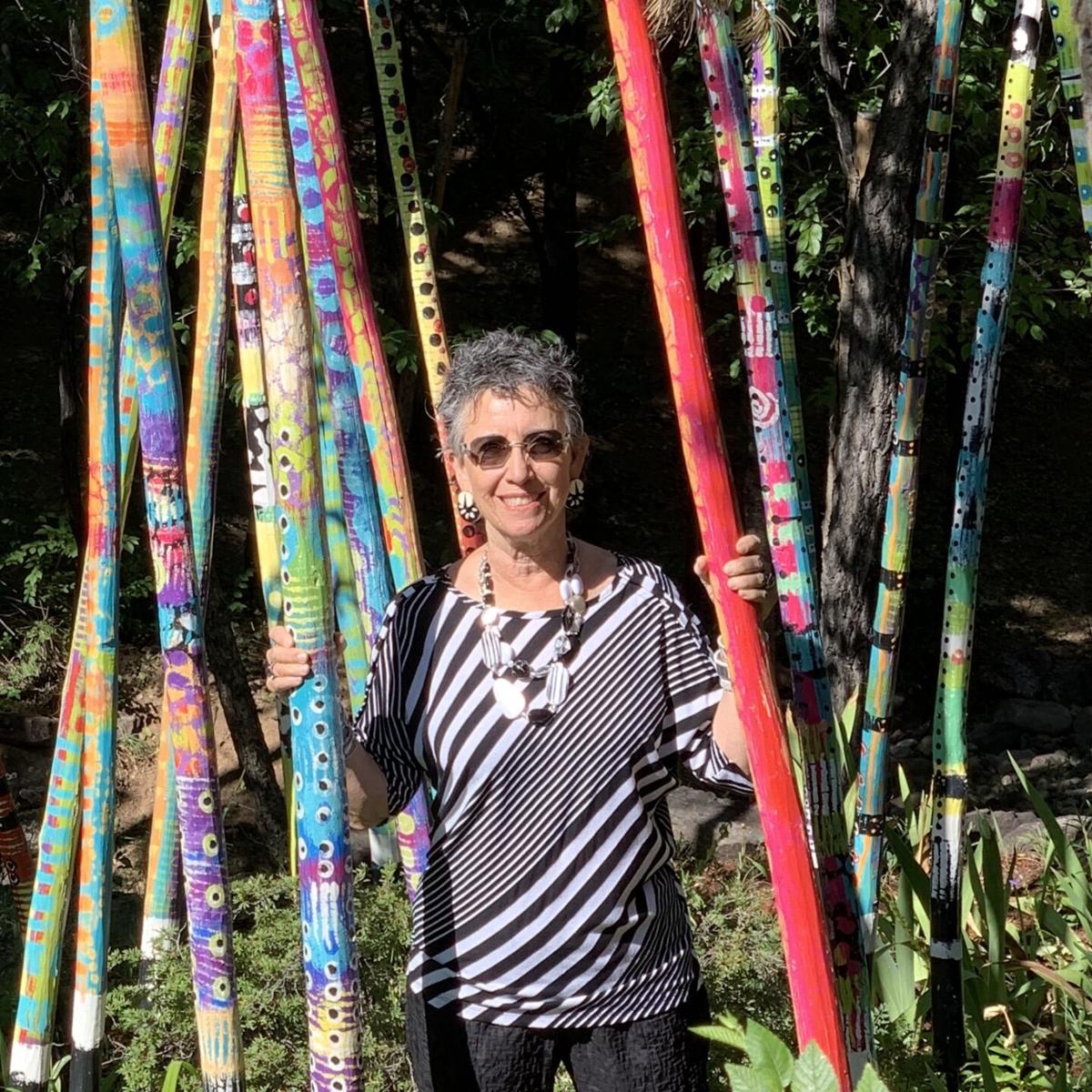 Victoria Rabinowe of Santa Fe shows off some over her colorful spirit poles. She displayed them for years on her street corner but is taking them down after several were stolen. 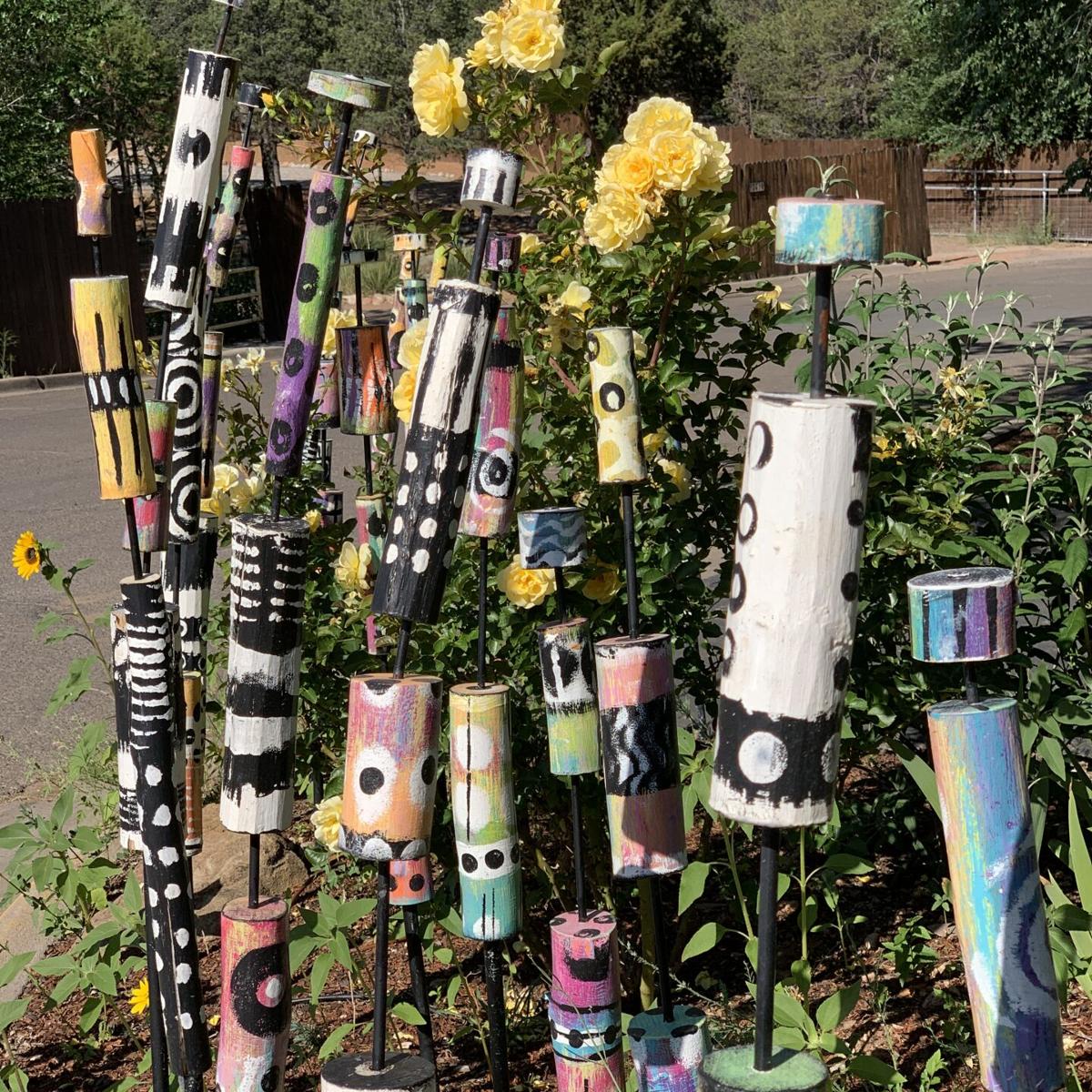 Some spirit poles displayed outside Victoria Rabinowe’s home. She displayed them for years but is taking them down after several were stolen.

Victoria Rabinowe of Santa Fe shows off some over her colorful spirit poles. She displayed them for years on her street corner but is taking them down after several were stolen.

Some spirit poles displayed outside Victoria Rabinowe’s home. She displayed them for years but is taking them down after several were stolen.

A Santa Fe woman who has adorned an intersection near her home with her artwork for the last six years said the tradition may come to a stop after someone stole several of her “spirit poles” last week.

Victoria Rabinowe had been placing the art at the corner of West Alicante Road and Don Gaspar Avenue as a way to bring joy to her community, she said. She knew it was a risk.

Last week, Rabinowe went outside her home and discovered some of the poles missing.

“I just wanted to do it,” she said. “It’s amused me for so many years. I really hadn’t thought about it anymore that anyone would take some.”

She called the thief her “mystery gopher” and said she does not plan to report the incident to police.

“My higher self thinks it’s someone who just loved them and wanted to have them in their own garden and really just didn’t have the moral compass that some of the rest of us do, or doesn’t really understand the way karma works,” Rabinowe said.

Her spirit poles are made from aspen latillas — peeled wood often used between ceiling beams — that were leftover from the construction of her home. She decided to paint them in her signature black-and-white style, but later expanded her palette, completing a colorful series of poles.

Some of the poles are 8-feet, 6-inches tall, and others are composed of smaller pieces stacked together. Rabinowe called the installation labor intensive.

After the theft, she took to online neighborhood forum Nextdoor, offering a reward in the form of a donation to a COVID-19 support organization to anyone who could help find the missing poles.

She also announced she would be taking the rest of them down.

“I got email after email after email of people saying how sad they were and how much they had loved the poles over the years,” she said. “It was just so heartwarming. I felt like — well, I lost some, but I gained a whole lot more from the experience.”

Support for her neighborhood display of art came from friends like Jim Fries, who’s known Rabinowe for nearly a decade through a dance group. He said he always saw the poles as an extension of her.

“My reaction was, theft in any form is bad,” Fries said. “But theft of artwork from the artist is sort of like stealing a bit of the artist herself, and I think that compounds the impact of the situation.”

Another friend and neighbor said she always loved the integration of art in the city, and Rabinowe’s corner was an example.

“It has been important to her to have an aesthetic that contributed to those who passed by or, in my case, several times a week walk by with my dog,” Jeanette Scott wrote in an email.

Rabinowe intends to keep making art that can be viewed by her neighbors, but she will ensure the pieces are not as vulnerable to theft, she said. She is also offering tours of the garden at her home, where many of her poles are displayed.

Thank you for sharing these with us for so long! I am sorry, some people are hateful and stole them. Your generosity was appreciated!

After the theft of my Spirit Poles from the corner of my property, the outpouring of supportive appreciation from friends and neighbors has been heartwarming.

I am scheduling timed tours on the hour for vaxxed and masked friends and neighbors. (kids can come, too)

Please let me know if you would like to visit my urban forest next weekend (or at a later date).

So sad to read. Those lovely poles are a highlight of my walks through the neighborhood

What colorful delight to add enchantment to a neighborhood. Such a kindness to share your art with the community. Very thoughtful to go the way of karma and make a donation to the CoVid relief fund as a reward for the art. Thank you for such thoughtfulness.