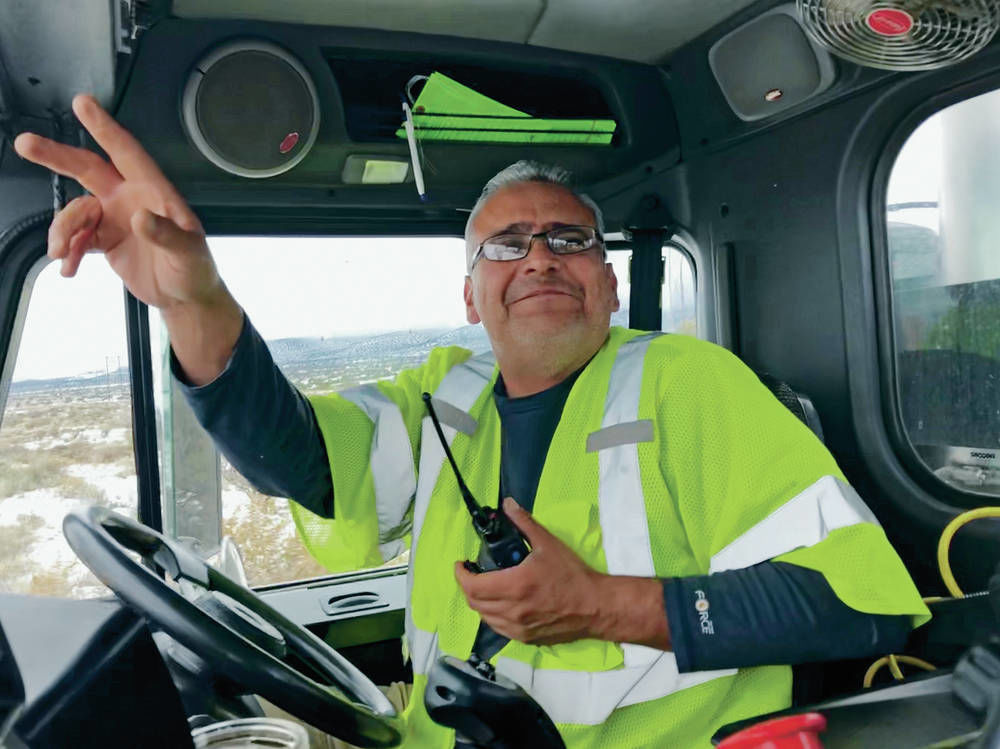 Daniel Larrañaga, an equipment operator with the city’s Environmental Services Division, waves goodbye to an employee at the Caja del Rio Landfill on Friday after dumping more than 18,300 pounds of trash he collected in less than two hours from homes on the city’s south-side. Daniel J. Chacón/The New Mexican 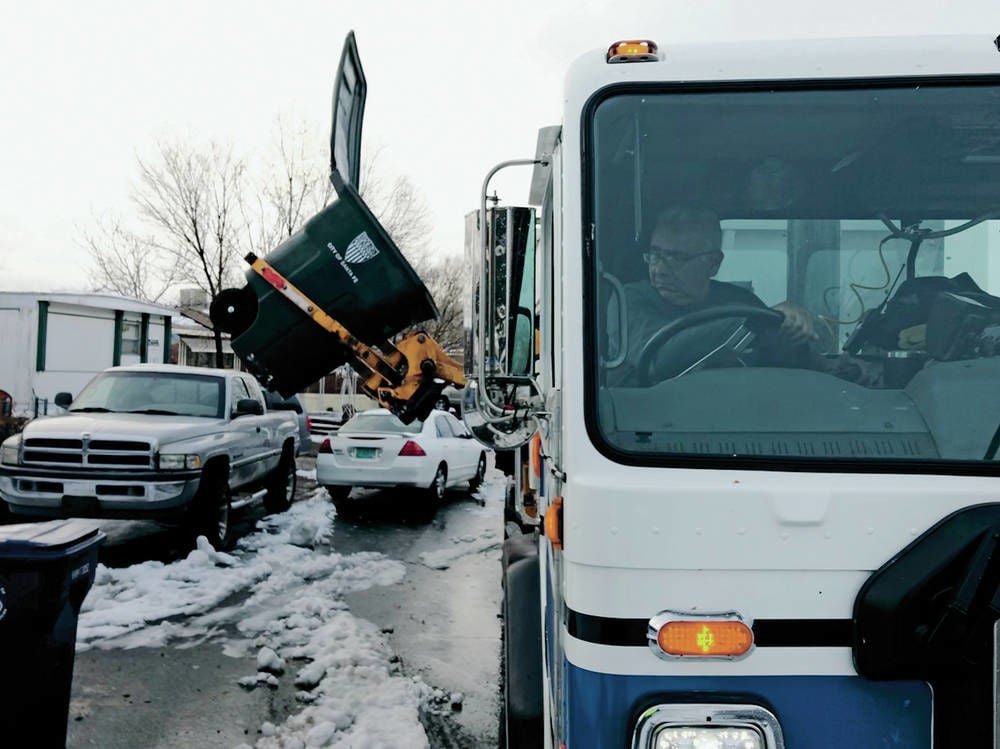 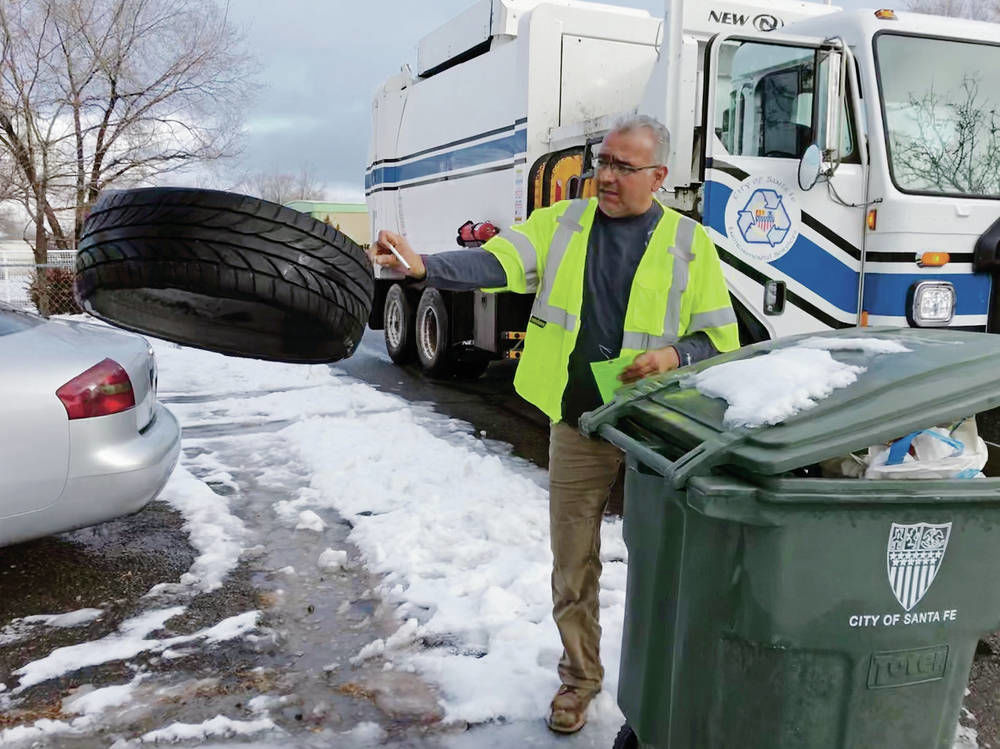 Daniel Larrañaga, an equipment operator with the city’s Environmental Services Division, tosses back a tire that was improperly put out for collection with the trash Friday. Tires are among prohibited materials in residential trash containers. Daniel J. Chacón/The New Mexican 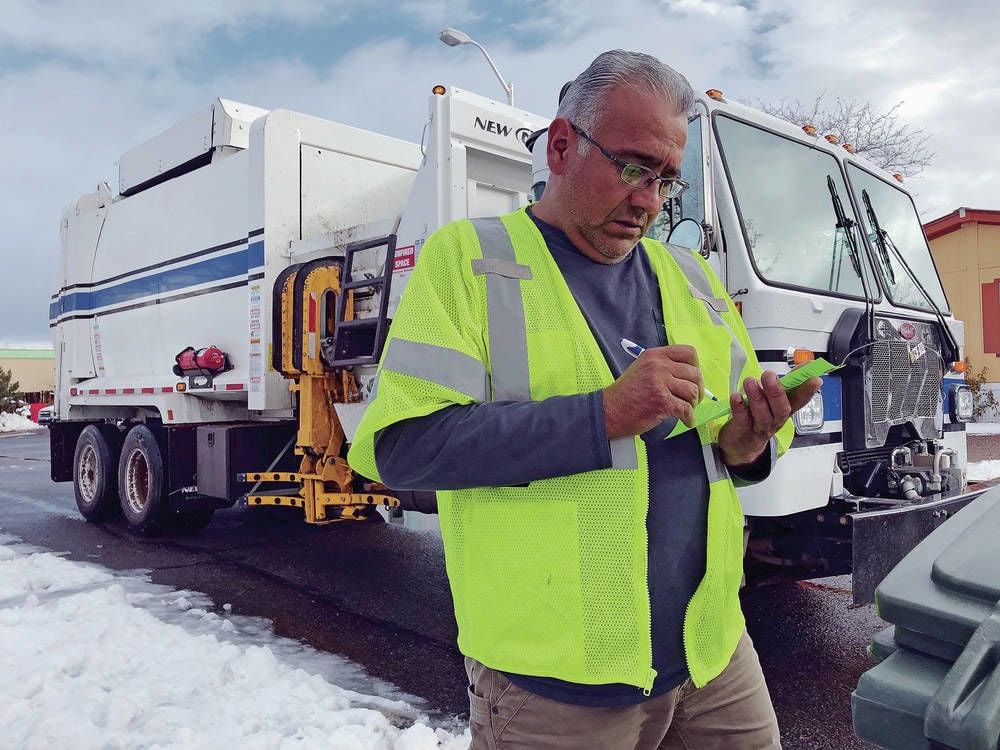 Daniel Larrañaga, an equipment operator with the city’s Environmental Services Division, waves goodbye to an employee at the Caja del Rio Landfill on Friday after dumping more than 18,300 pounds of trash he collected in less than two hours from homes on the city’s south-side. Daniel J. Chacón/The New Mexican

Daniel Larrañaga, an equipment operator with the city’s Environmental Services Division, tosses back a tire that was improperly put out for collection with the trash Friday. Tires are among prohibited materials in residential trash containers. Daniel J. Chacón/The New Mexican

While many Santa Feans were sleeping late or shopping Friday, Daniel I. Larrañaga was doing the city’s dirty work.

And dirty it was.

Welcome to the world of garbage truck drivers in Santa Fe the day after Thanksgiving, one of their busiest days of the year.

“OK, we’re ready to rock ’n’ roll here,” Larrañaga said as he began his route while driving a hulking 37,420-pound garbage truck into the Country Club Gardens Mobile Home Park on the city’s south side.

A garbage truck picking up containers of trash feels more like an amusement park ride than a walk through Graceland.

“There’s a lot more to it than just driving a truck,” Larrañaga, 50, said as he maneuvered narrow streets with his right hand and guided the joystick that controls the arm of the truck with his left hand — all while making sure he didn’t hit overhead lines, parked cars, pedestrians or anything else that got in his way.

“People think the trash truck is just like driving a car,” he said. “You have to make sure you have your clearances on the container you’re servicing. You have to make sure your surroundings are clear. People pulling out of their driveways and they don’t see you. Overhead lines above you. Your eyes and your mind are always going throughout the whole route, and that’s just being safe.”

The layout of Santa Fe’s streets, some of which are narrow, especially in older parts of the city, can make the job challenging.

“It’s not laid out with all your streets parallel, like the way Albuquerque is set up,” Larrañaga said.

Weather is another major consideration.

“With the way the roads were [Thursday], we all had our trucks chained up and stuff,” Larrañaga said. “It was slow-going [Thursday].”

Larrañaga, a former retail salesman who has been a garbage truck driver with the city for 10 years, doesn’t waste any time — and with 747 stops on his route this particular day, he can’t.

“Nobody’s route is done until all the routes are done,” he said.

“Statistics show in a trailer park, 98 percent of these containers at mobile home parks will be 100 percent full versus going through a suburban or a residential-type area — those areas tend to be a little lighter,” he said. “This is heavy.”

On any other day, Larrañaga said, the Country Club Gardens Mobile Home Park produces between 8 and 9 tons of refuse. On Friday’s route, he picked up more than 9 tons, or some 18,300 pounds.

Last week, for example, the city asked residents to be mindful of what they put in their trash carts after a discarded oxygen tank exploded as a garbage truck driver used a lift to empty a cart into his truck on a south-side residential street.

Larrañaga said residents throw away all sorts of items they shouldn’t.

“Dead animals,” he said. “People throw, believe it or not, they’ll throw toilets in there. They throw sinks in there. You get guys that try to throw construction materials.”

It’s not just what’s inside a trash can that drivers have to worry about.

Larrañaga recalled an instance in which a resident who hadn’t been following the rules for garbage collection became angry when Larrañaga didn’t pick up the man’s trash.

“This guy got so, so heated,” he said. “I had already left his street, and he jumped in his car and found where I was at. I was serving containers, and he pulled right in front of the truck and pulled his brake and cut me off. We had to call the police.”

But it’s not all bad. Larrañaga said he’s encountered some funny situations.

“[Thursday] was a prime example,” he said. “This one particular lady was basically in her nightgown and trying to pull her trash container through the snow that had just fallen, so I jumped out of my unit and took her can to the curb and serviced it for her. Her response was, ‘Thank you so much. Happy Thanksgiving. I didn’t know you guys worked on holidays.’ ”

While homeowners are generally understanding, Larrañaga said some people driving near trash trucks get impatient, passing on double yellow lines or tailgating. On his route Friday, a woman nearly collided with Larrañaga when she cut in front of him at a high rate of speed.

“That’s what we deal with,” he said as he let the woman drive past his truck. “She ramped those speed bumps and cut us off.”

But for Larrañaga, customer service is his top priority.

When he encountered an overfilled trash container facing the wrong direction, Larrañaga got out of his truck and turned the container around.

“I just explained to her what she was doing wrong, turned the container for her and asked her not to overload her container anymore,” he said after the homeowner walked outside to find out what was going on. “She said, ‘Thank you.’ ”

Larrañaga encountered other instances where trash containers were overfilled or had prohibited items inside.

“That can, I probably shouldn’t service it, but to avoid a complaint or an unhappy customer, I’ll do my best to pick up every container,” he said, referring to a cart that wasn’t at the curbside but inside the property.

The trash and recycling drivers who come by our house each week are great. Give them a wave. They are an important contributor to our quality of life.

You got me thinking, I better put out my trash, and I thought, It's Saturday, I'm late. Then the coffee kicked in, and I remembered that trash day is Monday.