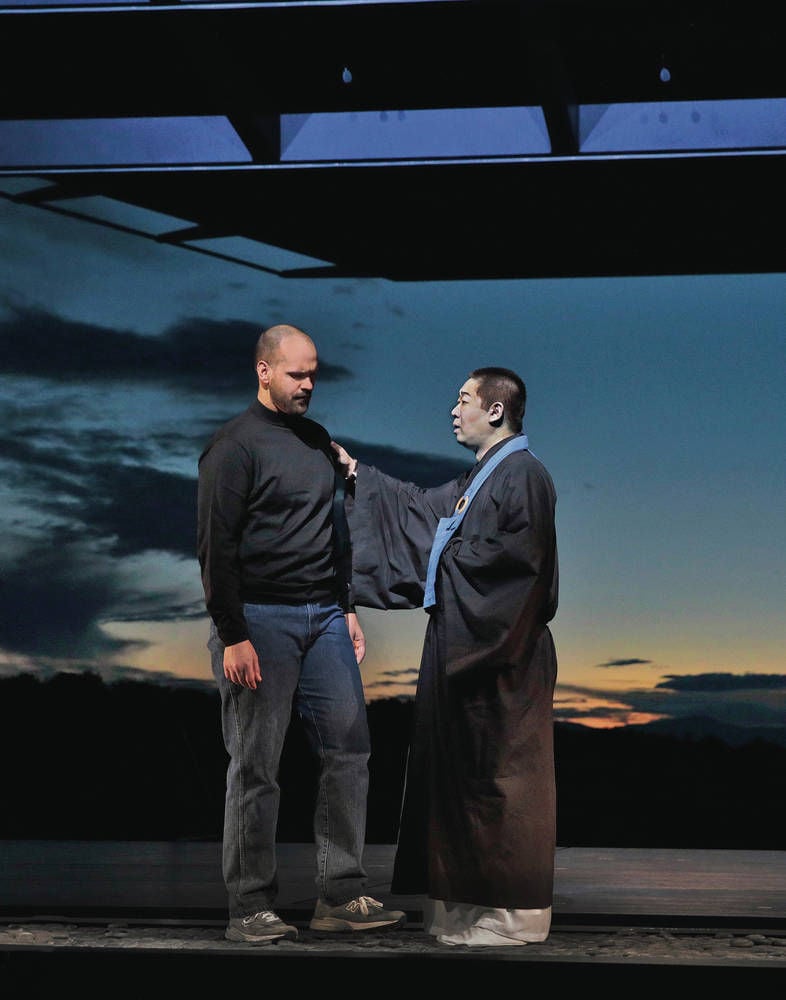 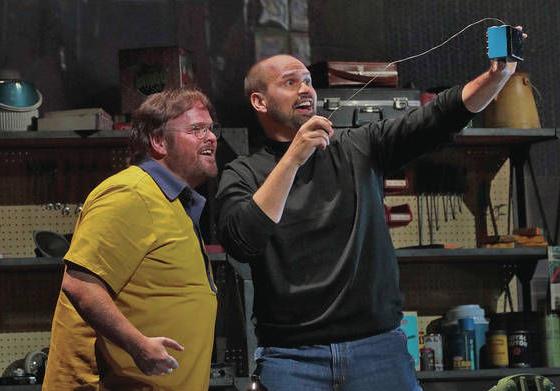 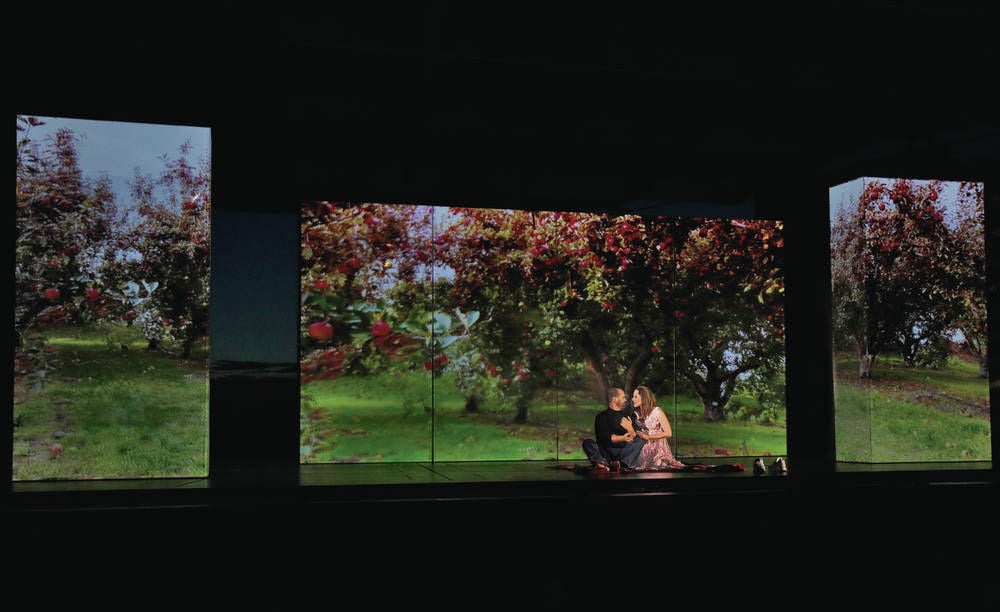 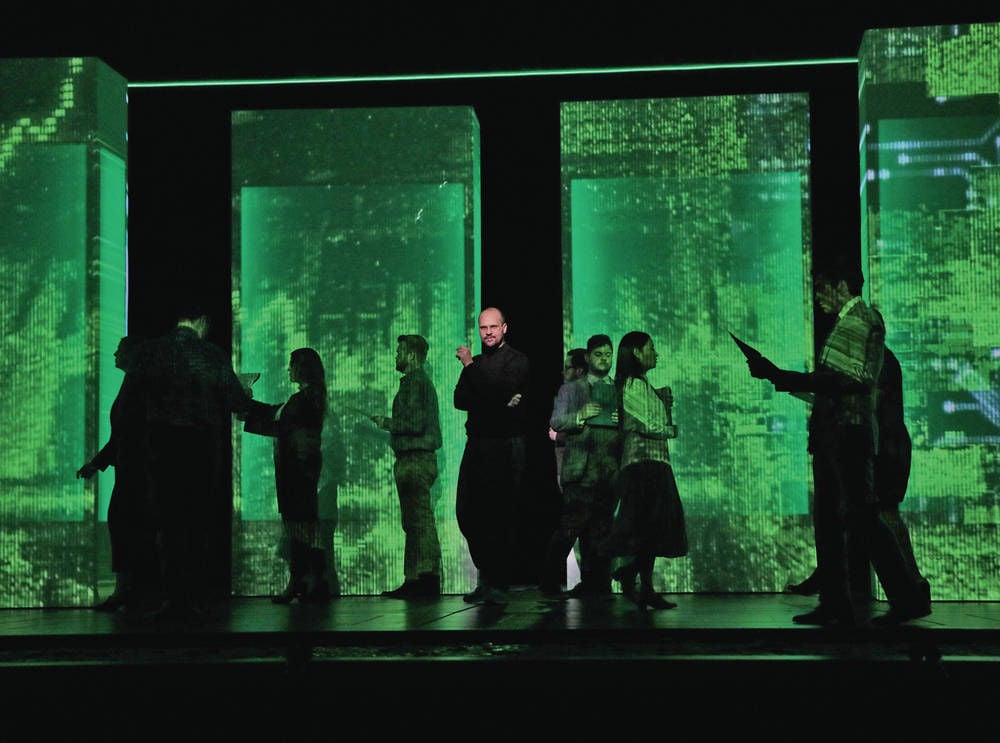 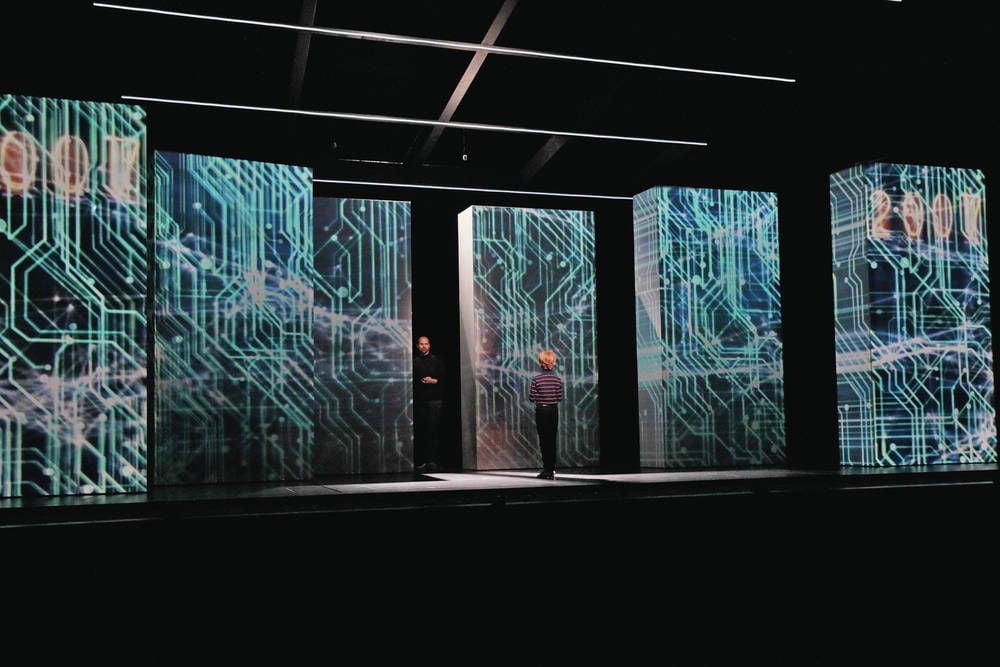 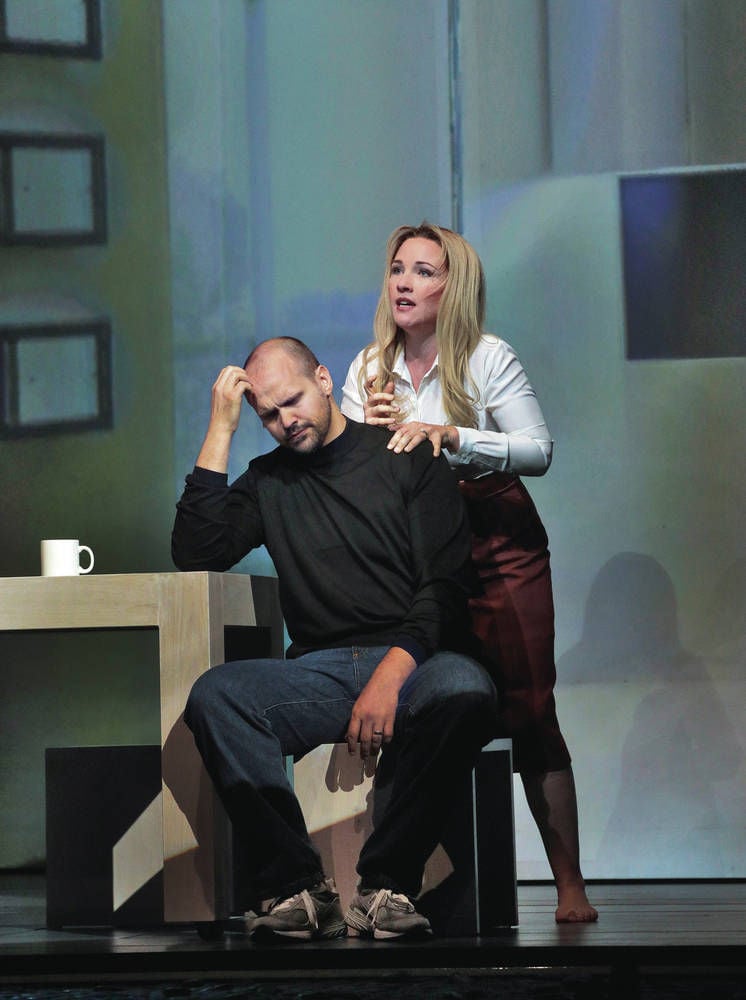 If opera is going to grow as an art form in the 21st century, it’s going to need more than directors imposing quirky concepts onto familiar repertoire or composers retracing well-worn tracks of post-Romanticism. It’s going to need the kind of musical and dramatic persuasiveness that enthralled the Santa Fe Opera’s audience on Saturday night at the world premiere of The (R)evolution of Steve Jobs, a bracing opera by composer Mason Bates and librettist Mark Campbell.

This is an American tale told with American bravado. Steve Jobs was both adored and vilified as a person and as a corporate genius, but as the visionary behind the Apple computer empire he was ultimately responsible for the iGadgets (phone, pad, pod, …) that have become defining artifacts of modern life. The opera’s scenario extracts seminal chapters from his life story, casting him as both hero and villain, a man at war with himself. He develops his passion for engineering as a child, achieves technological breakthroughs in his family’s garage and gleans ideas from his educational experiences. He has a relationship (and a daughter) with a woman he treats terribly, and he searches for inner peace through Zen Buddhism. He establishes and oversees his mega-successful corporation, he marries a supportive woman who helps tame some of his demons, he gets sick, he dies. Librettist Campbell shuffles these episodes and arrives at a nonlinear narrative that, on the face of it, seems somewhat random; and yet it unrolls with a strong sense of theatrical momentum and is not at all confusing.

What: The (R)evolution of Steve Jobs

“Simple, clear-cut, uncluttered and clean” sings Jobs at one point, clarifying his design goals to an engineer. Director Kevin Newbury seems to have taken that as his own watchword, masterminding a production in which one scene flows to the next seamlessly, each employing visual details that support the thrust of the action rather than distract from it. Sets, lighting and projections (devised respectively by Victoria “Vita” Tzykun, Japhy Weideman and 59 Productions) work as a piece. Horizontal bars of multicolored fluorescence contain the space from above, sometimes echoed by thin pillars of light ranged near the sides of the stage. Brightly lit wall-height blocks skim fluidly across the stage as if in balletic choreography. Furnishings are limited to what is essential to the story: workbenches, office desks and chairs, nothing extraneous. The production capitalizes on the projection capacities made available through the theater’s recent overhaul. The imagery of Jobs’ life is projected, often in energetic juxtaposition (circuit boards, press clippings, Zen calligraphy), and a scene where he does LSD with his girlfriend in an apple (!) orchard gets woozy indeed. This is in no way a costume drama, although Paul Carey’s realistic wardrobe designs help clarify the intermixed chronology — and they even make clothing styles of the 1970s and ’80s seem relatively unobjectionable, which is quite an achievement. Groups of employees or board members are moved about as precisely as the elements of the set.

Just before an early expanse in which we first see Jobs with his Zen master, Campbell’s libretto proposes a stage direction: “If the back wall of the Santa Fe Opera House can open up for the next scene, that would be lovely.” It could and it was, with the last sliver of the sun gleaming on the horizon of the Jemez Mountains. “Quite a sun,” sings Jobs’ mentor. “Always loveliest when it’s leaving.” And yet, having tapped the house’s ace in the hole, Newbury does not overplay the hand. The point is made, the audience inhales the exquisite moment, and the stage soon reconfigures so the plot can move on.

Bates’ music tends to be powerfully optimistic, trading to some degree in sustained transcendence. The score’s vivaciousness comes more from high-energy rhythms, often repeated in a post-minimalist way (John Adams may come to mind), and from a vivid sonic palette. A good deal of advance chatter focused on Bates’ use of electronic sounds, which he presided over from his computer setup in the orchestra pit. But it’s not like olden days when superimposing electronic sounds over an orchestra had an oil-and-water quality. Bates has spoken of how he considers modern electronica to be a further family of symphonic music-making — strings, woodwinds, brass, percussion, electronica — and this score exemplifies his contention, with the electronic sounds weaving in and out of the integrated texture with a sense of inevitability. These are hardly unfamiliar sounds, to be sure. We hear them all the time in movie soundtracks, but Bates shows real expertise in using them to enlarge orchestral texture.

He had some challenges to meet. He has been almost exclusively an instrumental composer, building up a solid output of symphonic and chamber works but a vocal catalog that is limited to six choral pieces and two song cycles. An opera obviously requires skill in vocal writing, and Bates showed that he has the requisite chops to write effectively for lyric theatre. Indeed, this is not much of a stop-and-sing “numbers opera.” Although it includes some certifiable arias and ensembles, these seem crafted more to support the dramatic narrative than as opportunities for vocal display — which is not meant as criticism. One also wondered how effectively Bates would navigate the sheer scale of operatic structure, since none of his concert pieces has extended beyond a half-hour and most run 15 minutes or less. But the question of whether he could maintain musical interest through a 95-minute operatic score (without intermission) seemed to some extent moot. The piece consists of a prologue and epilogue with 18 discrete episodes in between, so that averages out to four and three-quarter minutes per scene. Some are longer and some shorter, but with his succession of modestly scaled segments, Bates landed on an effective plan that was entirely achievable for a composer writing his first opera — one that moreover helps define the work’s kinetic verve.

Review: ‘The (R)evolution of Steve Jobs’: Zen and the art of opera

Michael Christie conducted with precision and pizzazz, and a couple of orchestral interludes truly got the adrenaline pumping. One of them, at about the opera’s one-hour mark, accompanies projected images charting the meteoric rise of the company and its growing complication as a corporate organism. I wouldn’t be surprised if it were extracted to stand as a frenetic orchestral showpiece in its own right.

The cast was uniformly commendable for their acting as well as their singing. In the title role, baritone Edward Parks is on stage practically the whole time. He appears in roles like Figaro in The Barber of Seville and Valentin in Faust, so he is obviously able to sing in an expansive “operatic baritone” style. But he didn’t really do that here. He presented the part more intimately, as a lieder-singer might, with naturalness of style and exemplary diction. Subtle amplification underscored his performance, and indeed those of all the singers — a logical use of electronic technology in a score such as this.

Mezzo-soprano Sasha Cooke was a pleasure to hear as Jobs’ wife, Laurene. Her rich, warmly covered tone was put to finest use in her climactic aria “Humans are messy, awkward and cluttered,” an anthem to empathy, one that may become embraced as a standalone piece. A similarly touching performance came from Wei Wu, as Jobs’ Buddhist mentor Kōbun Chino Otogawa. This beautifully written role encompasses both wisdom and wry humor, and Wei Wu’s bass — not particularly large but of velvety texture — infused it with a feeling of profound comfort, a welcome anchor in the emotional turbulence that sometimes surrounded it. Garrett Sorenson conveyed substantial character development as Jobs’ fellow inventor and business partner Steve Wozniak; he began as a comical dork and ended up as a serious corporate grown-up, his bright tenor letting loose fully in the tenseness, and then fury, of his aria “Goliath,” in which he resigns from the company he has built with Jobs. Smaller roles were admirably conveyed by baritone Kelly Markgraf (as Jobs’ father), mezzo-soprano Mariya Kaganskaya (as a calligraphy teacher), soprano Jessica E. Jones (as Chrisann Brennan, Jobs’ girlfriend), and Jonah Sorenson (a nonsinging part upheld admirably by a young actor portraying the 10-year-old Jobs).

Bates and Campbell are not the only people charting a path for opera’s future, but one is more likely to find seriously creative new work in warehouses and experimental theatres than on a major opera stage. Santa Fe Opera and its general director, Charles MacKay, deserve congratulations for making such a piece available at this level. The day of the premiere, the company added an additional performance (on Aug. 22) to the six it had originally scheduled. That should help accommodate audience demand as word circulates about this charismatic piece. It will surely appeal to millennials, thanks to its dynamism in harnessing the technology of today to tell the story of technology’s yesterday. But more traditional opera-lovers are bound to embrace it, too. Like all the finest operas, it is animated by a stimulating plot, it is brimful with compelling music, and — not less important — it has an ample heart.

Correction: A previous version of this review misidentified the actor playing young Steve Jobs. It was Jonah Sorenson in the role, not Asher Corbin.