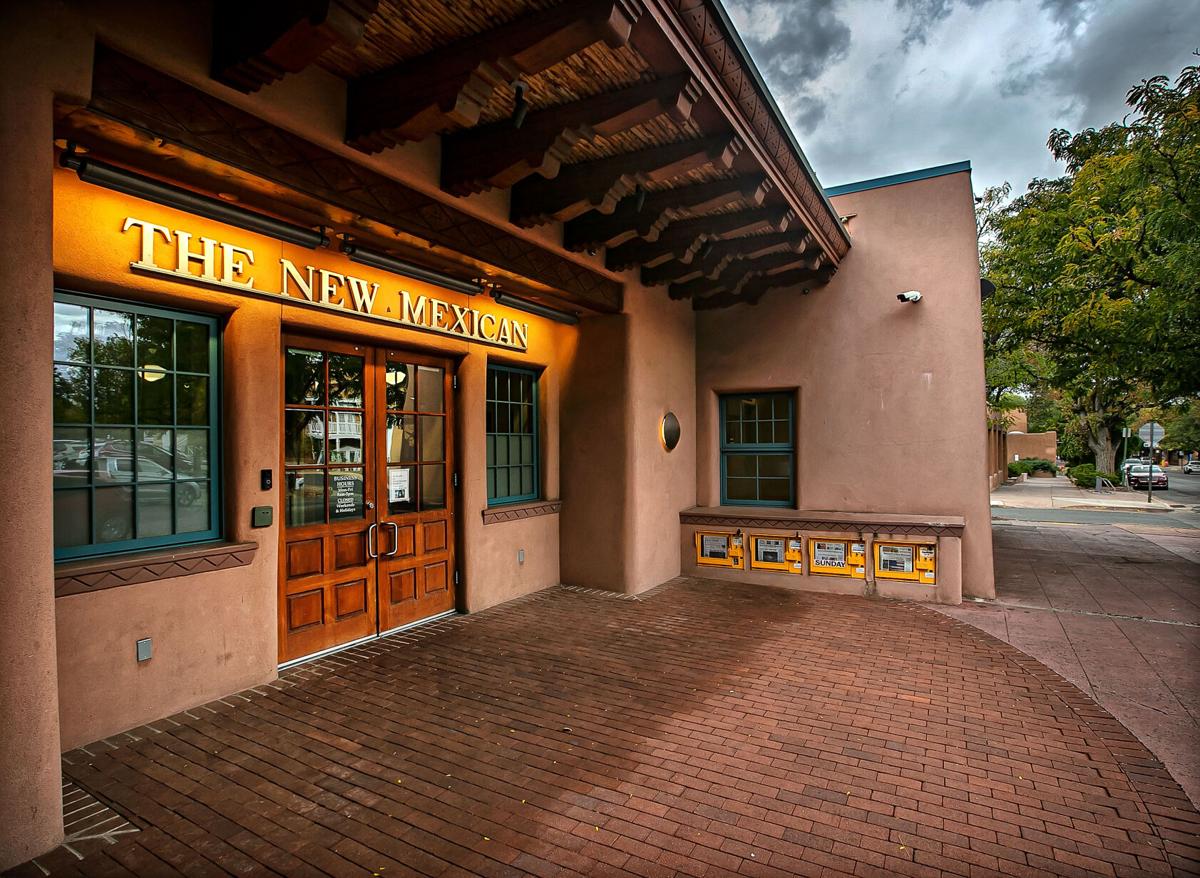 During a staff meeting Thursday, The New Mexican Publisher Tom Cross and owner Robin Martin announced the newsroom would be changing building locations in 2022. 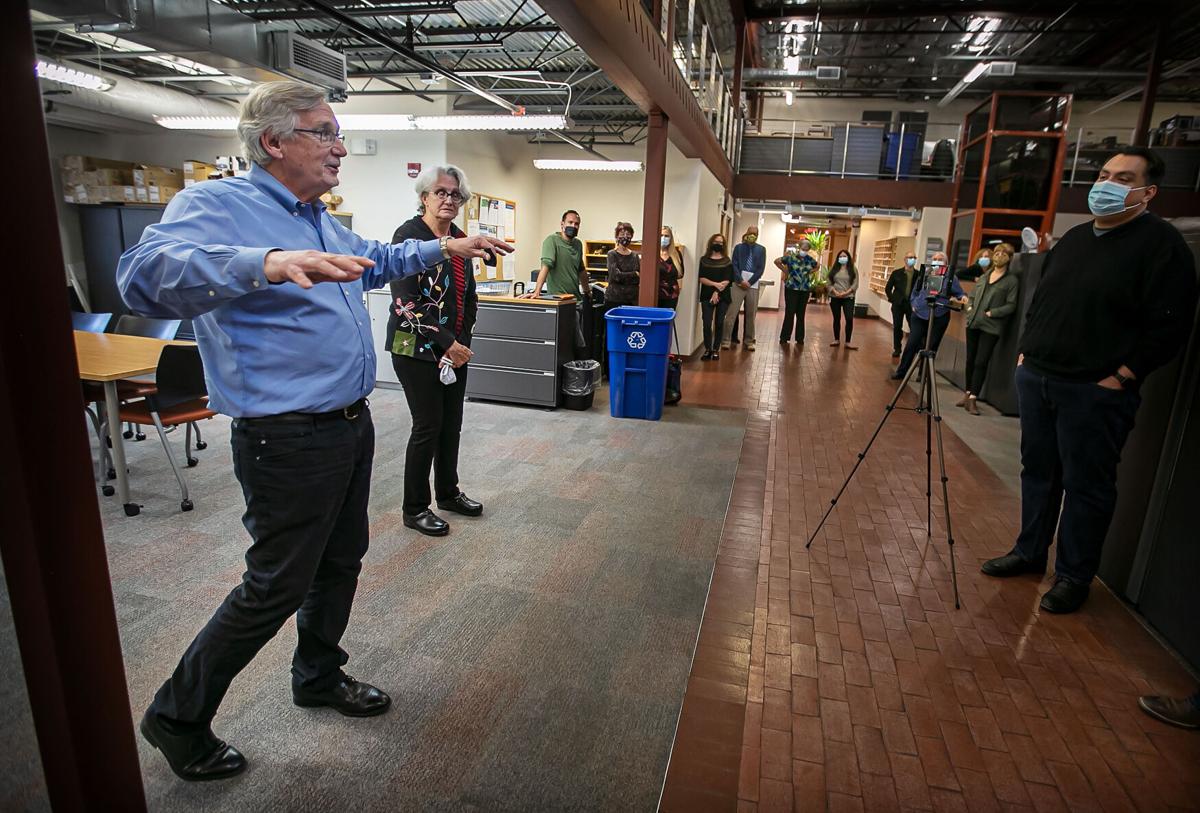 During a staff meeting Thursday, The New Mexican Publisher Tom Cross and owner Robin Martin announced the newsroom would be changing building locations in 2022.

The New Mexican is leaving the familiar Marcy Street location it has occupied since the 1940s, but the newspaper is committed to finding another home in downtown Santa Fe.

Publisher Tom Cross told employees Thursday afternoon a lease agreement for the newspaper’s Marcy Street building had been signed earlier in the day. Cross initially declined to identify the tenant but later confirmed the New Mexico Administrative Office of the Courts would be leasing the building beginning Feb. 1.

“The Marcy Street building is massive compared to the space that we need,” Cross said, adding the building is about 29,500 square feet and the newspaper occupies only about one-third of that space.

“We’ve always been looking for tenants in order to lease the building because it just is way too big for us and, you know, to be honest with you, the expenses [go] with the size of the building,” he said.

Owner Robin Martin told employees the decision to lease was based on the long-term interests of the newspaper.

“It seems silly to be spending all this money for keeping this building up that we should be spending on covering the news and having good advertising and all that,” she said.

Martin, whose father, Robert M. McKinney, purchased the newspaper at the end of 1948, said the move will be hard.

“I’m sorry because one of my very first memories is being up in my father’s office, sitting on the floor and scribbling on a piece of paper while he was talking on the phone,” she said.

The New Mexican has other tenants currently in the building, including Girls Inc. and former U.S. Sen. Jeff Bingaman, who also will move out.

The newspaper also has a large printing facility at 1 New Mexican Plaza on the city’s south side.

Artie Pepin, director of the Administrative Office of the Courts, said the Marcy Street building will allow the agency to consolidate.

“I’ve been at the [agency] for 15 years, and this will be the first time all of my folks, my different divisions, everybody except our technology people … will all be together, which is really wonderful,” he said. “We’re so happy that we have a space where we can be in one place instead of scattered in four or five different places around the city.”

Pepin said the agency employees were largely housed in a legislative annex across the street from the New Mexico Supreme Court.

“The Legislature let us know that they needed the space from the Legislative Education Study Committee, and so we had to move out of there,” he said.

While employees primarily worked from home during the coronavirus pandemic, he said the agency “went to work” on finding a new office location.

The lease agreement is for 10 years with the option to renew for an additional 10 years in five-year increments, he said.

The lease includes parking spaces adjacent to the building, plus 11 additional spaces that initially will be in a parking lot on Marcy and Otero streets, Pepin said.

“The rent rate is $700,000 a year,” Pepin said. “That includes both a base rate and an operational rate because it includes the utilities, electricity, heating and cooling and all that stuff. We have to change the light bulbs, but they have to pay the electric.”

Pepin said the agency can opt out of the lease “with sufficient notice” if the Legislature builds or provides a building near the Supreme Court.

The agency works for the Supreme Court to administer all of the courts throughout New Mexico.

The present building on Marcy Street was built under the ownership of Frank Rand, who bought the paper in 1940.

While the building has been up for sale or lease for several years, Martin said a sale is off the table.

She said her two children “don’t want to get rid of it.”

Asked by an employee whether her children would be taking over the newspaper, Martin replied, “Eventually, I hope.”

Newspaper employees will be moving to an undetermined location, but Cross said the newspaper is eyeing other locations downtown.

“The anticipation is that the space will be downtown in this general area,” he said. “We think it’s important for The Santa Fe New Mexican to be downtown, so we have a commitment to downtown. That’s our plan, to have a location downtown.”

Cross, who has been at The New Mexican for nine years, said the newspaper has entertained anyone who expressed interest in leasing or buying the building.

“Now, we are not interested in selling,” he said. “Like [Martin] said … we are keeping the building. It’s not for sale, won’t be for sale.”

When I first got to Santa Fe in'76, I stayed in a cafe/house on Cienega St. I loved walking around (had not car) downtown & fantasizing about finding work in Santa Fe: maybe for the government of the city or the state; maybe writing for the Santa Fe newspaper - I loved the building! I went to Taos, fell in love with the Mountain, & my first job was in a new fm radio KXRT. Then I moved to Santa Fe in '85; my first job was at KTRC am radio - next to The New Mexican building. So, yeah, I too have sentimental ties to the building. I still go there for my Saturday - TV Guide paper, and to renew my old acquaintance with the building.

I fully appreciate that the move makes financial sense and helps assure that our locally owned, independent newspaper survives to serve its community. The reporters will still report, the editors edit and the news flow just as it does now. Still, I feel a sense of loss – another Santa Fe icon fades into the past.