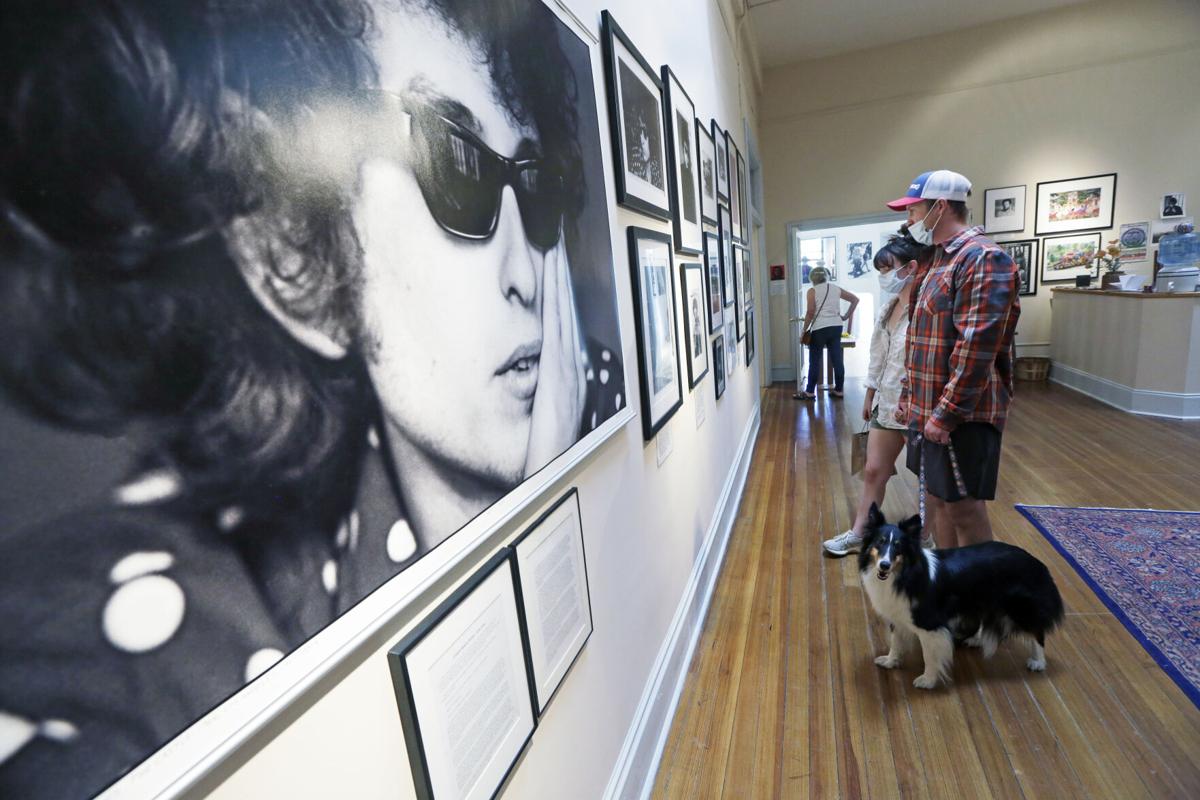 Bobby Babcock, of Tulsa, Okla., his wife, Kari Babcock, and their dog Lucy walk through the Museum of the Sixties on Monday. The temporary-hoping-to-become-permanent exhibition of the cultural, political and historical events of the decade are on display on San Francisco Street. 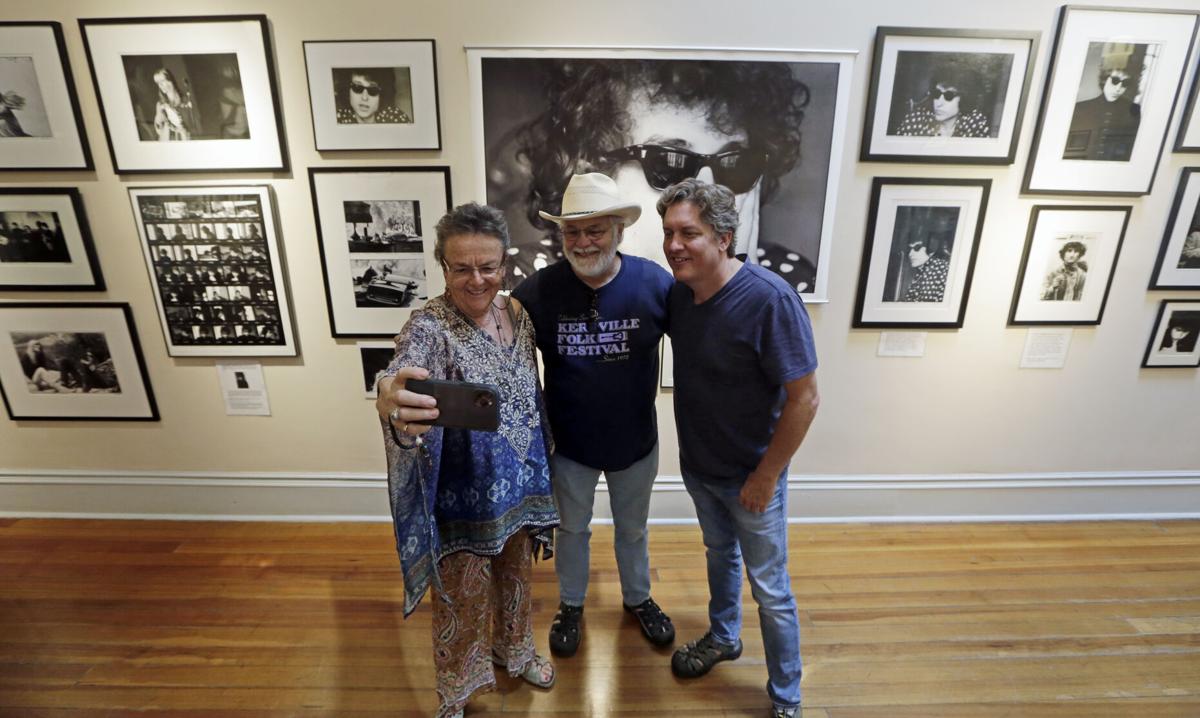 Photographer Lisa Law takes a selfie with Gary Nicholson, center, and Shawn Camp, both musicians from Nashville, Tenn., on Monday at the Museum of the Sixties on East San Francisco Street. 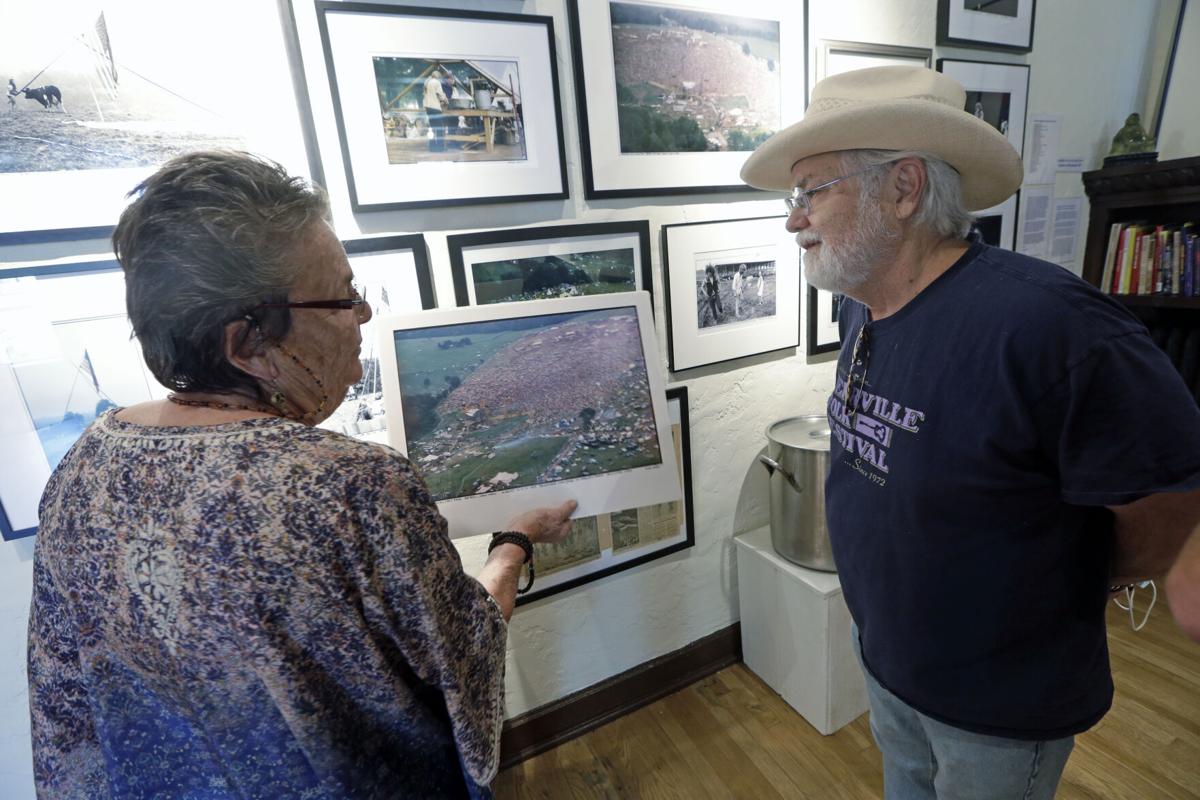 Photographer Lisa Law shows Gary Nicholson, a musician from Nashville, Tenn., one of her prints from Woodstock at the Museum of the Sixties on Monday in Santa Fe. The temporary exhibit is open through the end of the month.

Looking at the photo on the wall of the Beatles performing in concert, Barbara Nicholson suddenly felt a wave of goosebumps move across her arms and shoulders.

The image, part of an exhibition chronicling the 1960s, immediately transported her back to her college days at the University of North Texas in 1968 when the Fab Four’s song “Revolution” hit the radio airwaves. At the time, she was helping to support presidential candidate Eugene McCarthy, who unsuccessfully campaigned on an antiwar platform for the Democratic nomination in that year’s election.

It was a heartbreaking time — filled with awful news from the Vietnam War, of political assassinations, a time of conflict and unrest. It was also time of free love and peace signs, hope for a better world and music that spoke to those dreams.

Looking back at that decade that shaped America and those who lived through it, Nicholson, 71, said it was a time of “mostly happiness. Maybe I want to focus on the good. I want to focus on the pride I felt passing out fliers for Eugene McCarthy, feeling everybody played a part in this, no matter how small.”

Nicholson, who lives in Nashville, Tenn., was one of several people visiting the hidden-away Museum of the Sixties, a temporary-hoping-to-become-permanent exhibition of the cultural, political and historical events of the era. It is curated and run by Lisa Law, Santa Fe’s own documentary photographer of that time.

You’ll find clothes, books, magazine articles, moccasins, cradleboards, posters, fliers and photos of the people, places and politics of the 1960s, with a heavy New Mexico influence. Law has lived and worked in the state for decades.

Many of the photos are visual signposts of the counterculture movement times: hippies in San Francisco’s Haight-Ashbury District; bathers smoking joints in hot springs in New Mexico; youth protesting Vietnam; musicians and festivalgoers alike caught up in the mud, music and mayhem of Woodstock.

It was, in the words of Tulsa, Okla., resident Kari Babcock — a child of the ’90s who visited the museum Monday — a period of “giving total of ourselves to experiencing and beauty.”

It was also a time of international and civil strife.

“Look at the turbulence that went down in ’68 alone, the trauma we want through as kids,” he said, looking at some of Law’s photographs of actor and photographer Dennis Hopper, another cultural icon of the decade.

He said he sees much of that decade’s energy and activism being played out today in terms of “where the culture is divided right now.”

Kari Babcock’s husband, Bobby, 29, feels the same way. As Bob Dylan songs played in the background on the museum’s stereo system, he said he and his wife are “hippies at heart” who love the music of the 1960s.

That music helped “create a magical time that seems to be having kind of a resurgence nowadays,” he said.

Much of the museum’s material comes from Law’s collection, including her vast array of photographs that seemed to capture all the right people, places and political movements at just the right time.

Her father, Lee Bachelis, a furrier and union activist, used a 16-millimeter film camera to capture life in Los Angeles in the 1940s — including the violent, historic clash among Hollywood union picketers, police and security forces outside the Warner Bros. gate in October 1945.

Bachelis gave his daughter her first camera — a Brownie — around 1950. She started taking photos of anything and everything: cars, people on horseback, her friends going for a swim or digging for clams.

In an interview held in the museum, which opened in July and is scheduled to close at the end of September, Law said she always photographed “everything that hit me, affected me emotionally,” whether it was a pair of hippies posing for her in San Francisco or poet and writer Allen Ginsberg spontaneously dancing to a tune by the Grateful Dead.

“I was diligent,” she said. “But also a good photographer.”

She’s still taking photos all the time: “Life in front of me — music on the Plaza, people in the museum, kids, family, art, everything.”

She opened the museum in an old gallery space on the second floor of an East San Francisco Street building owned by local businessman Peter Komis.

Law said Komis offered to sponsor the show for three months before he makes renovations to the building, which will require its closure. Law’s daughter, Pilar Law, who runs Edition One Gallery, is presenting the museum show. Lisa Law would like to find a permanent home for it, and said she has reached out to both city and state officials for help without success.

She said she sees a new movement of caring, just like she experienced in the 1960s, among people caught in the mental, emotional and physical whirlwind of the coronavirus pandemic.

She said she does not believe that is because of the political and cultural turmoil that has played out in the country over the past few years.

“It’s because of COVID,” she said. “Everybody is so sensitive. They’re scared they’re going to die.”

To Law, the 1960s was “a time when people really cared about one another, and the planet. We were all coming together like we were members of the same tribe.”

She said people want to feel united again like they did 50-plus years ago.

What: Museum of the Sixties

thank you Lisa for keeping hope alive and still kicking as it continues to live in the hearts of us fellow travelers and flower children of the sixties. POWER BELONGS TO THE PEOPLE, ALWAYS HAS AND ALWAYS WILL. now let's wake up and use it.

I was born on the cusp of the Baby Boomer Generation and Generation X, but, I'll always claim the latter as My Generation.

My late, beloved parents had a subscription to Life Magazine. As, -literally- a toddler I would peruse, the big, beautiful, colorful pages - often times asking my beloved "what did the words say?". This is around 1966-1970.

As a small-boy, I seen graphic images of Vietnam (naked girl running), the misnomered "Civil Rights Movements" (cities burning) and funerals for RFK and MLK, among numerous other world-class photos. My favorite issue went behind the scenes with Batman, and even inside the Bat-Cave!

Yet, in all honesty, I can remember thinking, in my pure, childish innocence: This World is so bad.

And, he's fresh out of gum.

This place is definitely worth the visit. There are many iconic photographs and excellent documentation of the great upheaval of the decade. Lisa law seems to have present at all the iconic moments, with her camera in hand. Despite the attempt of some to rewrite recent history (or to deny or defile it) the revolution of the baby boomer generation continues to reverberate.

I've visited the exhibition and it is terrific. The inventory of historical artifacts can easily consume a couple of hours of your time and that's without viewing the entirety of the "Flashing on the Sixties" movie that's spinning in a darkened alcove. I shall return. I hope this museum show finds a permanent location. I agree with Ms. Law that the concern of late, the covid fiasco, is very much a universal dilemma that has drawn everyone into separate camps of activism. "Everybody is so sensitive, they're scared they're going to die," says Law. This is a brief interview with the former vice-president of the European Advisory Group to the WHO. Read this and I am certain your fears will be alleviated, or at least, your understanding of who is actually in danger will be made more clear. https://tinyurl.com/a6jw24vp

What is the locations address?

Up the staircase above the Overland Leathers store at 76 E. San Francisco Street directly on the Plaza.