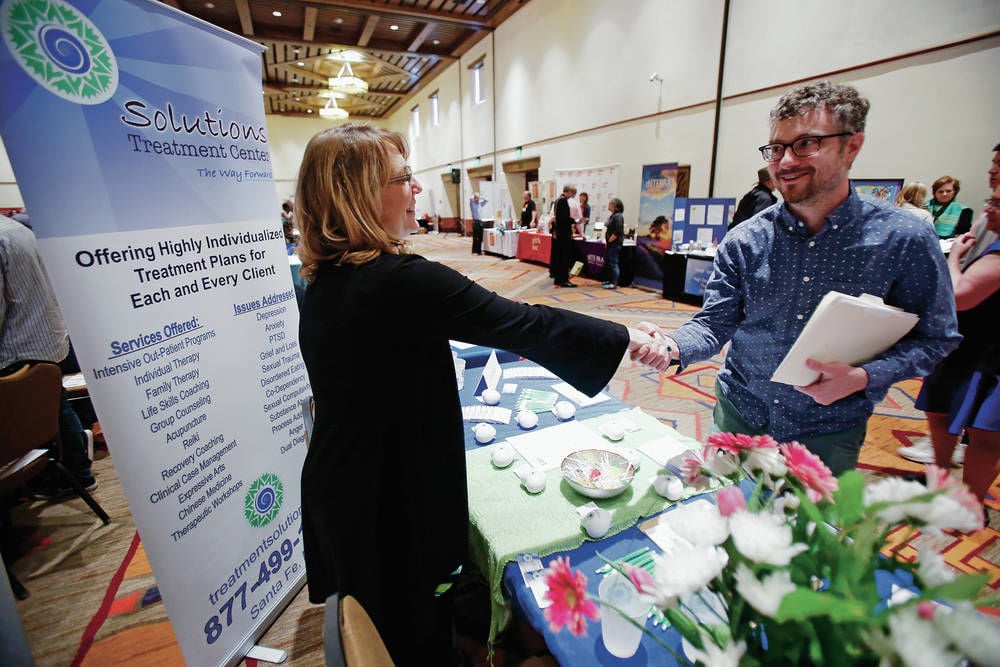 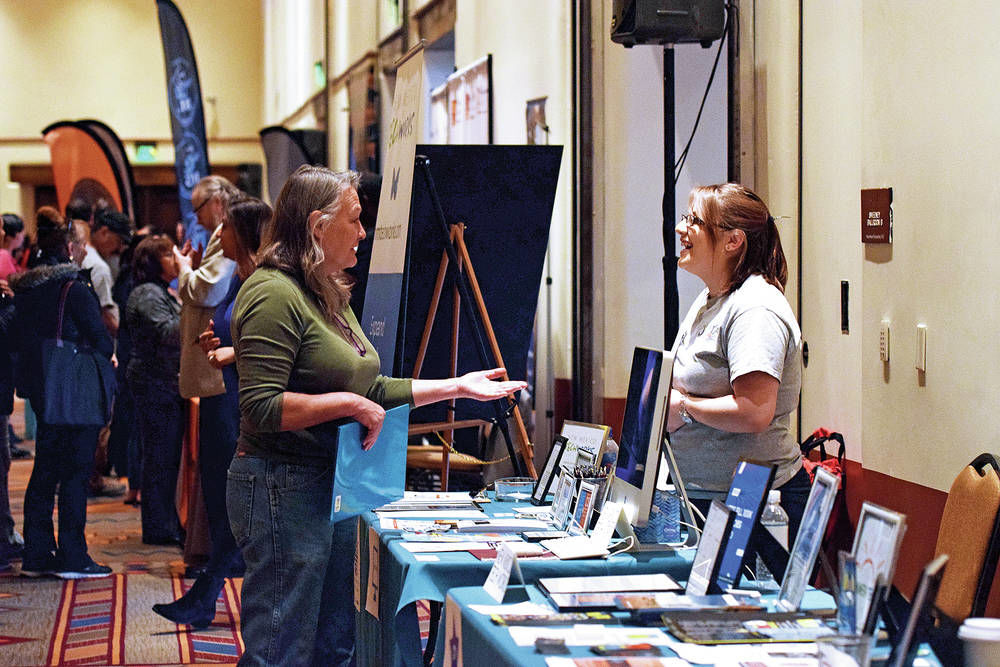 Sarah Cheney, right, with AmeriCorps VISTA, talks to a visitor about New Mexico Tech Works on Thursday during the Santa Fe Buisiness Expo and Job Fair at the Santa Fe Community Convention Center. As part of a technology corner at the expo, Cheney discussed the program seeking to expand technology access and education. Elayne Lowe/The New Mexican 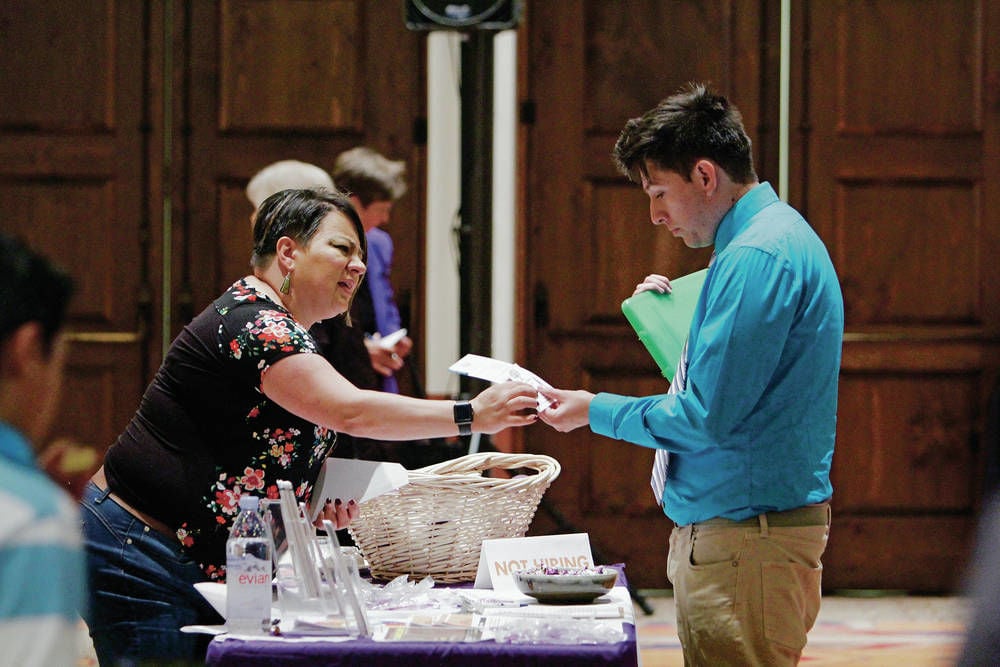 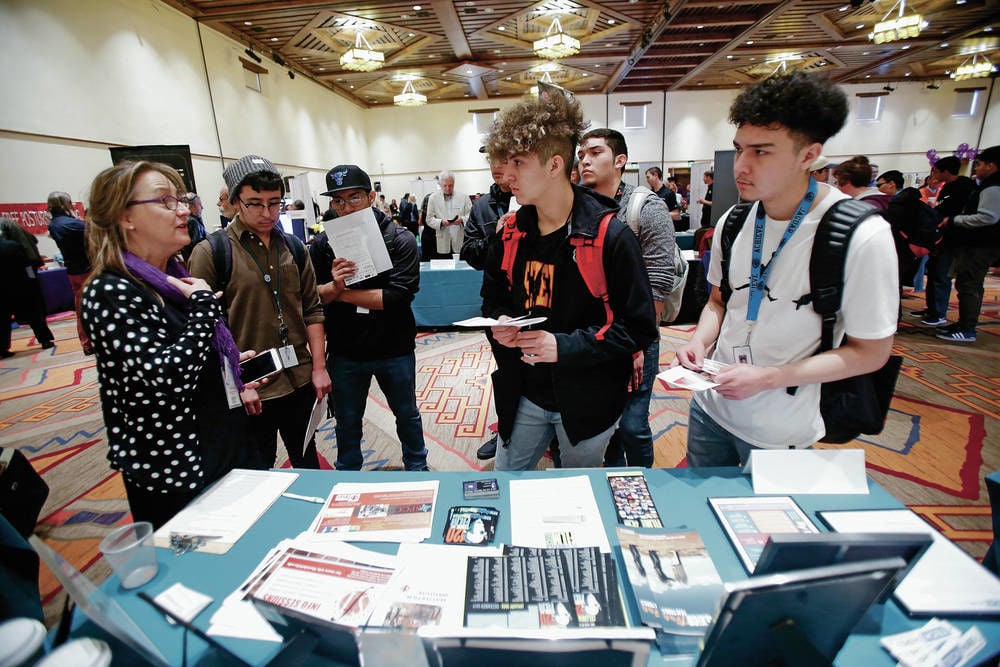 Sarah Cheney, right, with AmeriCorps VISTA, talks to a visitor about New Mexico Tech Works on Thursday during the Santa Fe Buisiness Expo and Job Fair at the Santa Fe Community Convention Center. As part of a technology corner at the expo, Cheney discussed the program seeking to expand technology access and education. Elayne Lowe/The New Mexican

Locally based technology companies for the first time occupied their own corner, under their own banner, at Thursday’s Santa Fe Business Expo and Job Fair at the Santa Fe Community Convention Center.

The annual expo featured a cluster of about 14 high-tech companies in a “technology corridor” — exhibitors that included Los Alamos National Laboratory, Flow Science, Meow Wolf, OpenEye and Capitol Computer and Network Solutions. In all, more than 125 Northern New Mexico companies signed up for space at the annual event.

Many tech companies posted a “hiring” sign on their tables, but their representatives said they expected to do more public outreach than applicant screening — in part because the bar they set for applicants is too high to expect promising prospects to simply walk in off the street. The primary mission, said many tech firm representatives manning expo tables, was to raise awareness that they are part of the Santa Fe community.

“I don’t expect to find that many people, but we want to spread the word,” said Krisztina Boda, a senior scientific developer with OpenEye Scientific Software, a Santa Fe-based company that specializes in drug discovery and design. OpenEye over the past six months grew by six new hires to about 60 employees, with another six to eight positions available, she said.

Many of the high-tech firms, including Descartes Labs, took part in the expo for the first time, said Simon Brackley, president and CEO of the Santa Fe Chamber of Commerce, which puts on the expo and job fair. Others, like Meow Wolf, also in the tech corridor, have taken part in prior expos.

“I think, in general, the economy is doing well in Santa Fe,” Brackley said. “Because of that, those three and others are being much more aggressive in terms of hiring.”

Meow Wolf took part this year not necessarily to fill openings but to steer applicants to its website. The company has fielded about 3,500 applications to date; it employs about 300, said Megan Roniger, an administrator for the arts production company.

Meow Wolf has two paths open for prospective hires and at some level is nearly always hiring, she said. One path involves the “public facing” part of the company: ticket agents, docents, food and beverage service. The other path is for creative and technical talent that produces the immersive experience for which the company is best known.

Jett Metcalf, a technical recruiter for Descartes Labs, which stockpiles and analyzes satellite imagery, said the company is hiring, but, like OpenEye, its requirements are steep and narrowly tailored. Descartes has openings for computer engineers, machine-learning experts, atmospheric scientists and geographers.

“Not in every community will there be [qualified] people coming to an event like this,” Metcalf said.

High school students interested in high-tech careers stopped by the Descartes table. And Metcalf said the company, founded three years ago by a group of Los Alamos National Laboratory scientists, wanted to show its community pride. Descartes in October signed a 10-year lease on a building on North Guadalupe Street and before that raised $30 million in a recent round of financing. Descartes wants to draw from local talent but can reach into places like Silicon Valley, too, Metcalf said.

“We’re able to bring people with no local connection who are excited about the technology,” he said.

Similarly, Flow Science, a company that developed software to simulate fluid dynamics, also is hiring, said Amanda Ruggles. It, too, has such specific requirements for technically adept applicants that it often accepts foreign students studying in the U.S. as interns, she said. Still, the company had a goal at the expo.

“We also came here specifically because of our internship program,” she said. Interns are recruited from graduate and undergraduate students, according to the company website.

Students who pursue engineering degrees in college “can stay or return to Santa Fe with a high-paying job that has good benefits,” Ruggles said. “We’re really looking for civil and mechanical engineers.”

Among the visitors to the expo was a group of Capital High School students interested in careers in science, technology, engineering and mathematics, Brackley said. The event was geared, in part, to showcase careers of all sorts in the local area, from florists to hotel workers to funeral directors.

“We are trying to keep our youngest, best and brightest rather than them leaving town,” Brackley said.