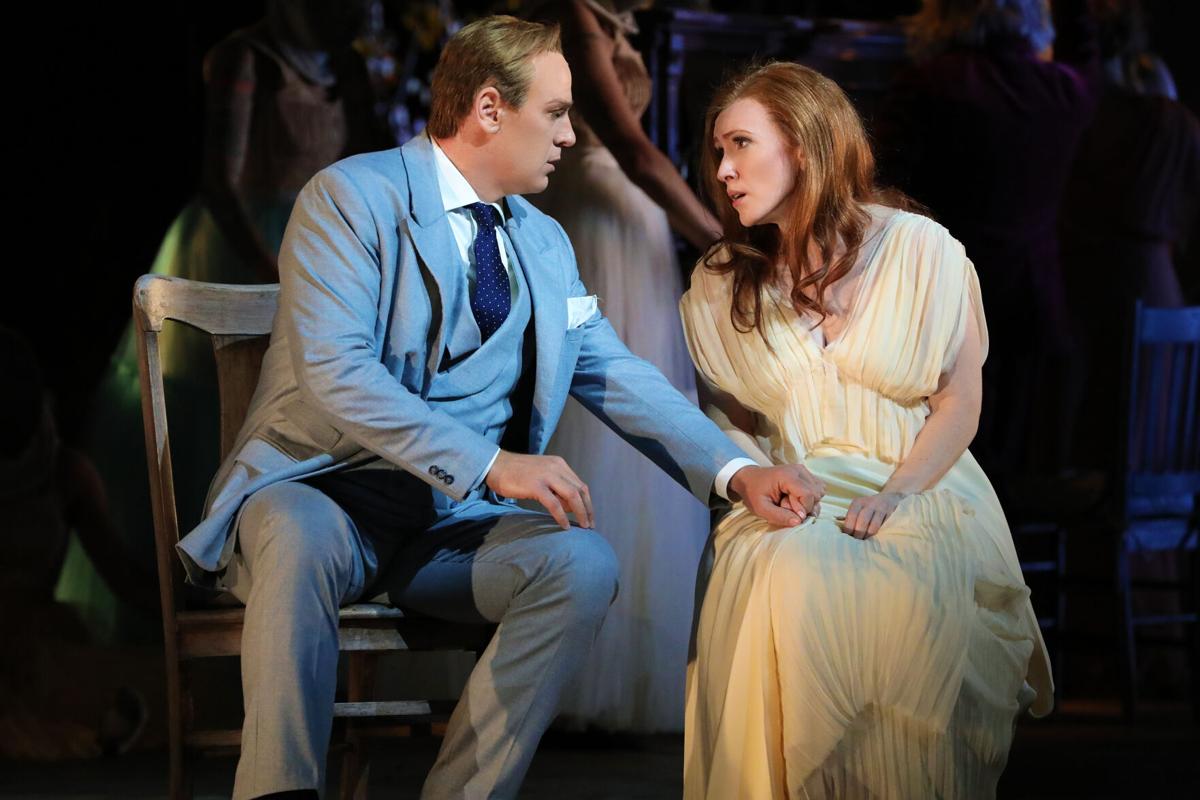 Lucas Meachem appears as Eugene Onegin with Sara Jakubiak as Tatyana in the Santa Fe Opera's production of Eugene Onegin. 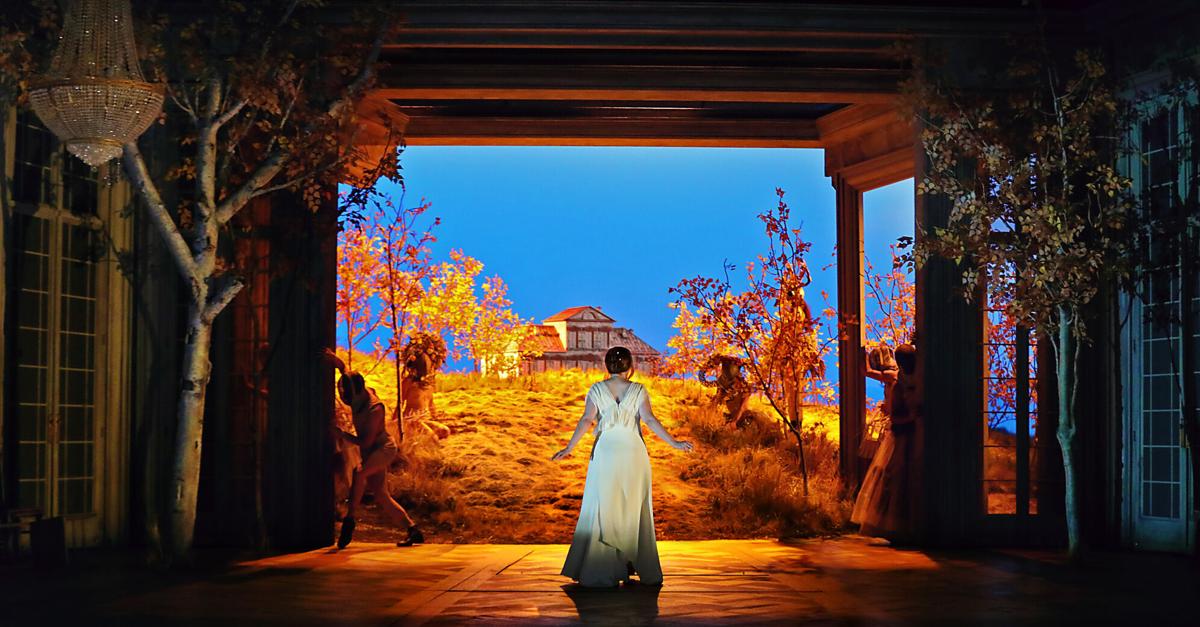 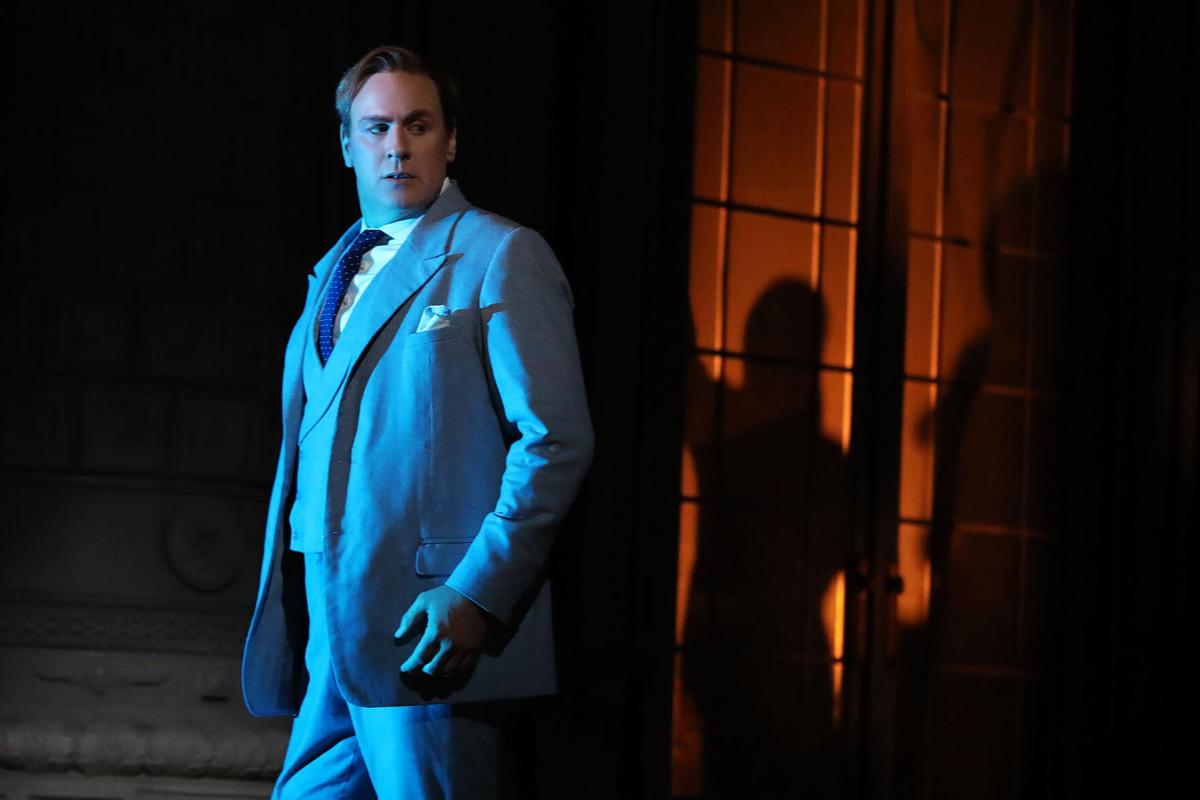 Lucas Meachem appears as Eugene Onegin with Sara Jakubiak as Tatyana in the Santa Fe Opera's production of Eugene Onegin.

The Santa Fe Opera’s production of Eugene Onegin, which opened Saturday, is one of the company’s most successful productions of a mainstream piece in several seasons, with searing performances in the two major roles, excellent conducting and orchestral playing, superior scenic and lighting designs, and a unique, pandemic-influenced directorial concept that sheds new light on some important scenes.

The plot is simple. The 17-year-old country girl Tatyana falls in love at first sight with the title character, a wealthy big-city dandy. She sends him a letter describing her passion; he rejects her. At a party, Onegin quarrels with his best friend Lensky, who is engaged to Olga, Tatyana’s younger sister. The quarrel ends in a duel in which Lensky is killed. A few years later, Onegin and the now-married Tatyana meet again, which summons up a long-suppressed passion on his part. He sends her a love letter; she confesses that she still loves him but is not willing to leave her husband.

Tchaikovsky and a colleague adapted the opera’s text from Aleksandr Pushkin’s verse novel, one of the great works of world literature, and the composer knew what he was doing when he called the resulting score “lyrical scenes.” It’s really about the family and romantic relationships between a close-knit group of five people, but it has multiple party scenes that are usually tricked out with a seemingly infinite number of servants and guests.

Stage director Alessandro Talevi, in his company debut, and scenic and costume designer Gary McCann, whose The Golden Cockerel was a high point in the opera’s 2017 season, didn’t have that point of view as an option. The company’s coronavirus protocols meant the chorus couldn’t perform onstage, so the production team developed a more fluid, less rigidly realistic concept that suggests the action is being seen through the main characters’ memories.

McCann’s scenic design imaginatively blended indoors and outdoors, with a ballroom downstage that sported two aspen trees giving way to a harvest-gold hill when the back wall split open. It made for some gorgeous tableaus, thanks also to Rick Fisher’s lighting, and effectively reinforced the production concept’s intentional ambiguity.

The socially distanced chorus sang from bleachers on the audience’s left and were replaced in the party scenes by a small movement group, including several performers from Santa Fe circus arts nonprofit Wise Fool, that was used primarily in a surreal manner. This worked well in Act I, in which peasants sing and dance to celebrate the end of the harvest, and it was revelatory in Act II. The party during which Onegin and Lensky argue is usually so crowded that it loses specificity until the end — here, with just the five principals onstage, it had real depth and psychological acuity throughout. The movement group concept doesn’t work as well in Act III, which opens with two long dances, but it’s a small loss compared to the overall gain.

You’d never guess it from their performances, but Lucas Meachem in the title role and Sara Jakubiak as Tatyana were both last-minute replacements for singers who couldn’t appear due to visa snafus. Jakubiak, who was an apprentice singer here during the mid-2000s, has a fascinating dramatic soprano voice. It has a rich, mezzo-like tone throughout her range, giving it a burnished-steel quality, along with ample size without ever sounding pushed. She’s also a terrific actress.

Meachem is a physically commanding performer with a voice to match; he uses it with lots of variety and color, making his Onegin a more three-dimensional character than the officious prig he’s often portrayed as. Their final confrontation scene was thrilling and dangerous, with both characters exploring new depths of passion, sorrow, anger and regret as well as a true “How is this going to end?” quality. It ended with a breathtaking coup de théâtre, which I’m not going to reveal here.

As Olga, Avery Amereau sported a plummy contralto and reveled in her character’s nascent sensuality, effectively contrasting with her dreamy, book-loving sister. When Olga dances with Onegin in the second act, prompting the quarrel with Lensky, it’s often hard to sense the extent of the social outrage it conveys, but not here. Their dance isn’t an arms’-length affair but a full-contact, body-to-body exploration. In his U.S. debut, German-Turkmen tenor Dovlet Nurgeldiyev made a positive impression as Lensky, especially in the poignant aria that precedes the duel, thanks to his pleasing, well-placed voice and a touching sincerity.

Bass James Creswell sang sonorously as Prince Gremin, who’s on hand only in Act III so Tatyana can have a husband; his aria extolling her many virtues is heartfelt but oddly funereal. Having mezzo-soprano Katharine Goeldner as Tatyana’s and Olga’s mother is a bit of luxury casting in a small role, as her attention-commanding matriarchal outburst in the Act II party scene demonstrated. Tenor Matthew DiBattista was amusing as the French tutor Triquet, while mezzo-soprano Deborah Nansteel, a small-voiced Filipyevna, successfully dodged the standard, stereotypical “beloved Russian nanny” interpretation.

Nicholas Carter’s conducting had admirable dramatic thrust, along with a sensitivity to the score’s more poetic moments. The opera orchestra played as well as I’ve ever heard it, with the score’s energetic dances providing impressive showcase opportunities. Particular kudos go to principal horn Kelly Cornell for many expertly rendered solos.

Those who insist on seeing an Onegin as they’ve seen it before should give this one a pass. For everyone else, it’s highly recommended.

Eugene Onegin performances are at 8:30 p.m. Wednesday and 8 p.m. Aug. 6, 12, 20 and 26. Tickets are $36-$278 for in-theater seating. All performances are being simulcast to the opera’s lower parking lot. Prices are $100 to $125 per car, depending on proximity to the screen. For more information, visit santafeopera.org